The Jane's Addiction company pulled in to our New York City hotel around 5:00 in the morning, after squeezing the tour bus around the labyrinth that is Soho. An exhausted bunch slept for a few hours, and then tried to cram as much New York stuff in as possible before show time that night across the river in New Brunswick, New Jersey. I hit the Museum of Natural History with the kids, saw the giant tower going up on the World Trade Center site, the very pretty High Line, and everything else I love about New York from my cab window. Then I raced back to meet up at the hotel to head to Jersey. 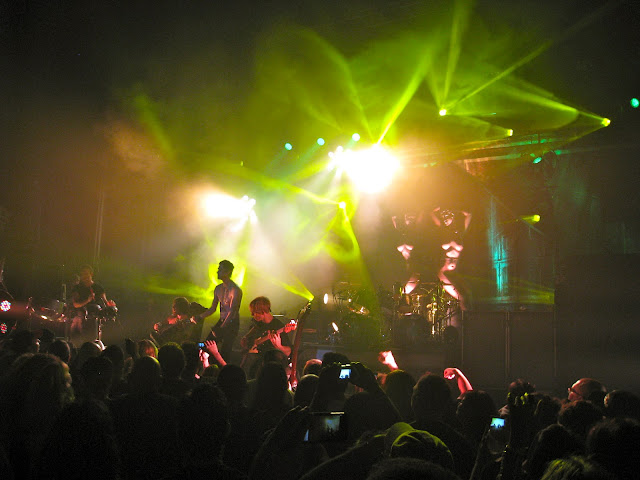 Traffic was so bad in Soho that we decided to hoof it to our bus stuck in it 6 blocks away, so we wouldn't be late for the show. We were probably quite a sight, the band and entourage filing through cars, carrying pizza (the perfect New York plain cheese) and all. You do what you gotta do, laughing all the while. 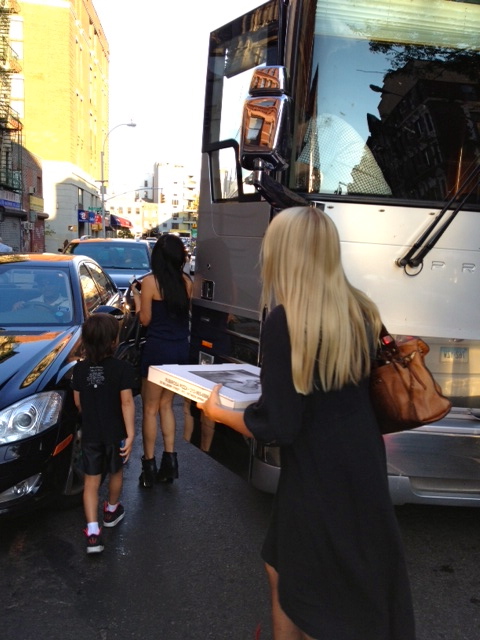 Once we arrived at the State Theater in New Brunswick, it was quick change time. The Great Escape Artist tour is full of what Perry calls "Immersive Theater", and as it was my last show on the tour, I tagged along with dancer, Bubba Carr, as he rounded up what they call the Chain Gang. 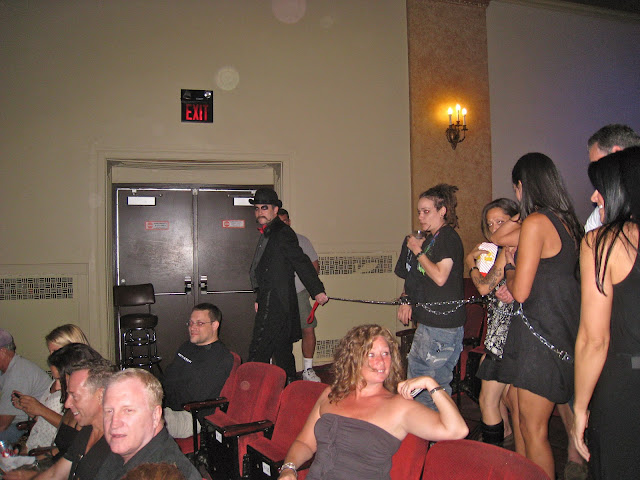 Bubba goes out into the crowd with chains and straps and picks out people from the crowd that he finds interesting or super-fan or just plain hot, and chains them up together to lead them back for a private Jane's Addiction jam in the "Boiler Room". It was hilarious to observe, as the fans have no idea what's going to happen, and I heard one wife's husband say, "This show might end up in Divorce Court", as she happily split in chains, and he watched her go. 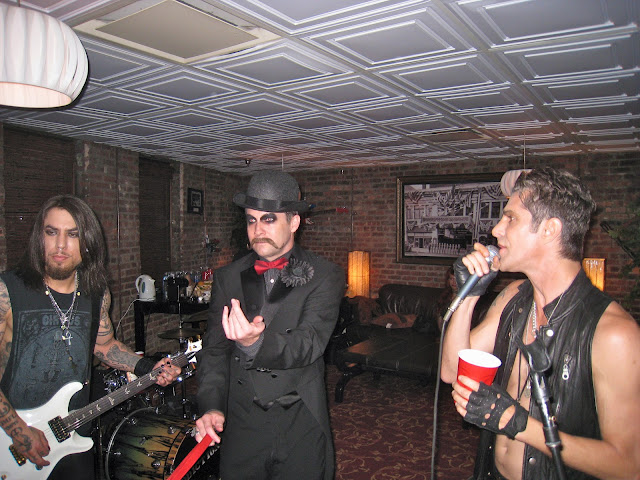 Once backstage, Bubba led the group into the Boiler Room, where the band was already jamming "Pigs In Zen" in what felt exactly like a basement party. Their faces were thrilled, and I imagine it will be an experience they brag about the rest of their natural lives. It's that cool. 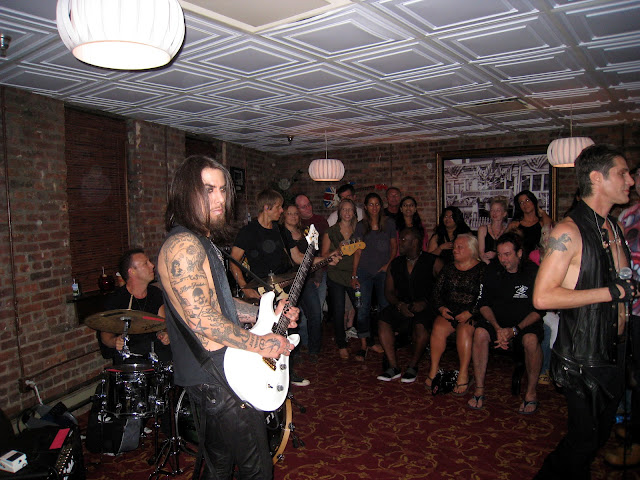 After a couple songs, the guys adjourned to get ready to ROCK the place, but not before we caught a minute of the mock-able Olympic closing ceremonies. WHERE was the punk rock that we loved England for?! Anyway ... 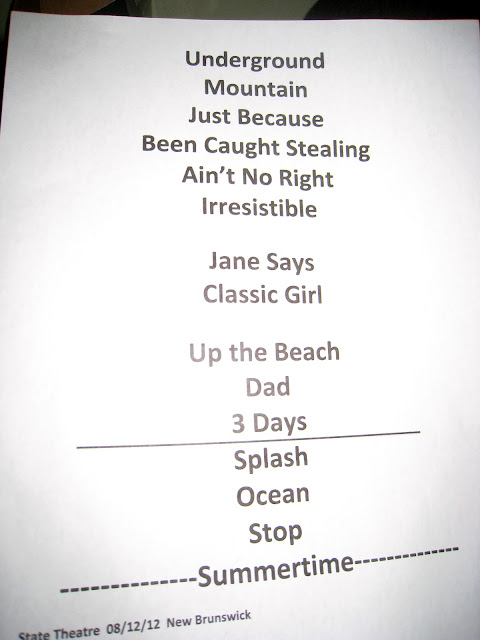 The night felt electric, and I don't think it was just me feeling nostalgic already. The fans were fired up and slamming drinks (JERSEY!) when I was out in the crowd with Bubba, and you just knew the place was going to go OFF. Which it did as soon as "Shine On You Crazy Diamond" began and the lights dimmed. 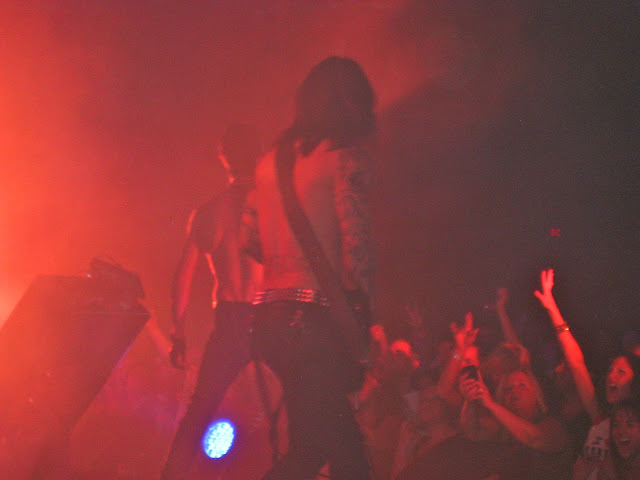 "Underground" and the giant white skirts had everyone's jaws gaping, and they never shut. Because "Mountain Song" was next, and it never let up from there. "Before I came here, I thought New Brunswick was a bowling ball ... Now I know better!" said Perry to the adoring throng. "Just Because" is Hezron Farrell's favorite tune, and the kids were rocking out on the side of the stage the entire show. Get ready for the next generation, everyone, because it's in these little ones DNA. Fun. 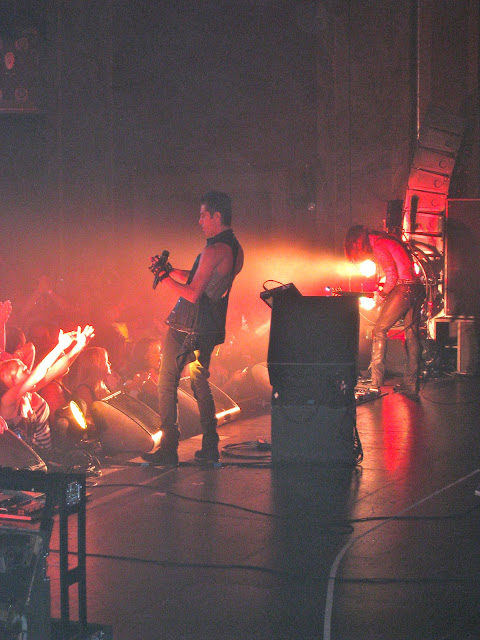 I don't know if the guys were showing off for me or what (ha), but they were simply on fire, to a man. "Been Caught Stealing" found Perry telling the crowd to move up to the stage, and once that happened, it was a madhouse of people reaching for his legs, holding their arms up for Dave to slap, screaming while smiling. 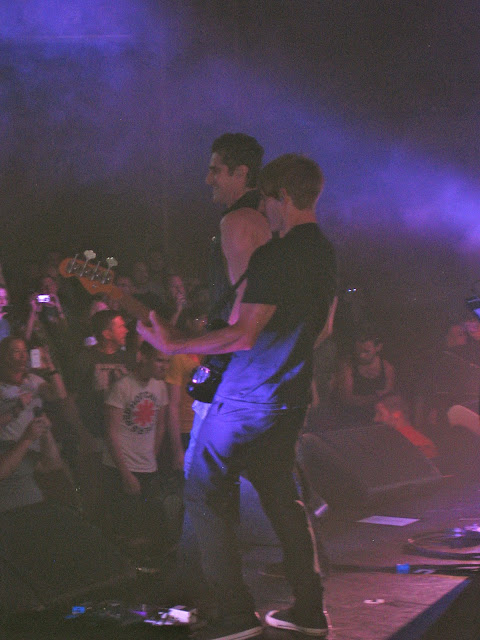 Perry took someone's camera and took a photo of them, managed to sign peoples' stuff and slap fives, all while singing these monstrous tunes. "Ain't No Right" had simply ferocious drums from Stephen Perkins, and Perry was a spinning, dancing machine. 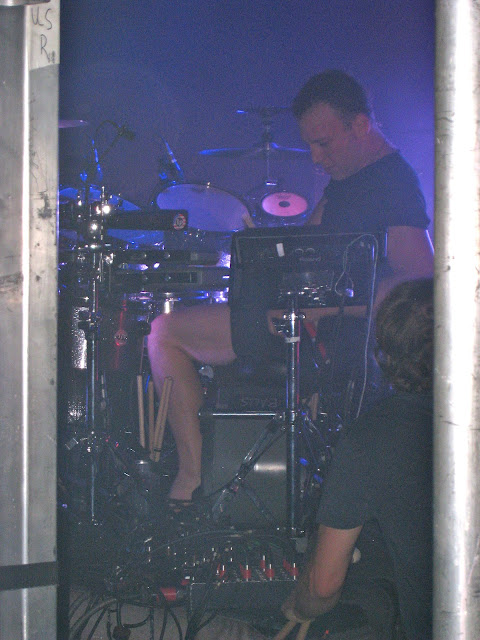 I marveled at how little sleep I know we all had, how Perry had a surfing injury on his hip that's been bothering him, and yet from the look, sound and feel of it, it was as if it was their first headlining show ever. MARVELOUS.

"Irresistible Force" was huge, and Etty once again flew and sang above the crowd from her perch high above on a trapeze. Then the crazy music plays as Stephanie Spanski as an Automaton in a baby carriage walks across the stage and trips everyone out. I love it. 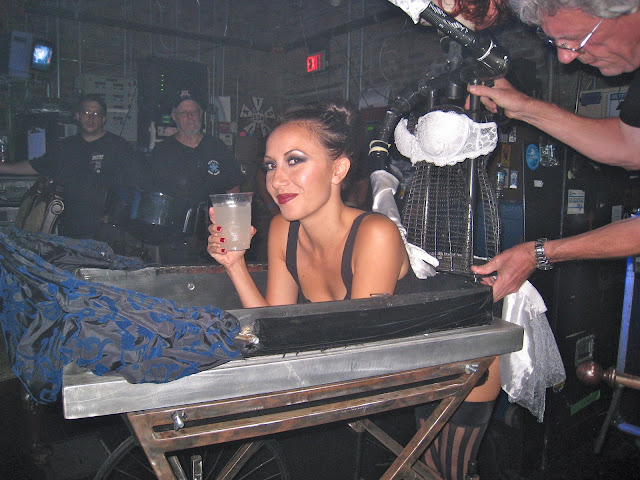 The acoustic "Jane Says" is always a crowd pleaser, and sure enough, everyone in that joint was on their feet, front to back, singing along LOUDLY to every word, absolutely beside themselves with elation. Ask 'em. 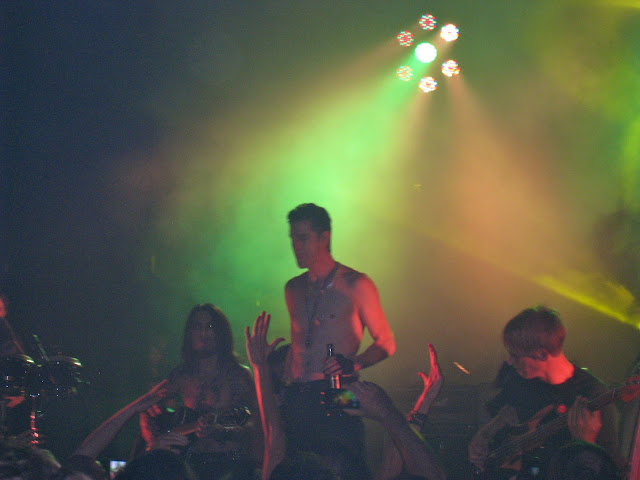 Someone handed a flask to Perry, who took a swig, and then he returned the favor by passing around his wine bottle down front.  The good times were rolling, for sure. New Brunswick!!! 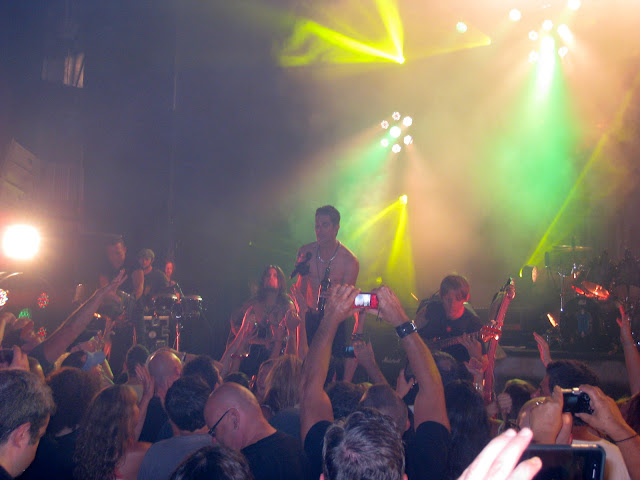 "We always get requests for this next song {often by me}, and this one will always help you get laid, fellas", said Perry to introduce the pure classic of "Classic Girl". I, and everyone else, almost died. You don't get to hear this one very often, and I've loved it from first listen back in college. 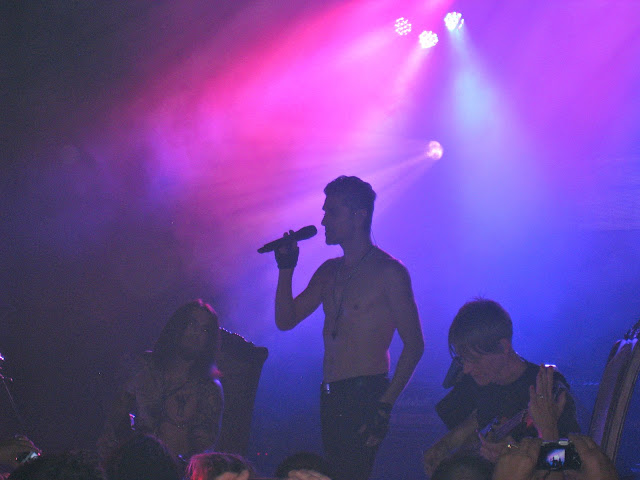 Women were all over Perry and Dave in the front, hanging on to their arms and legs to the point that it was surprising they could still move and play. One lady even had a custom "I heart Perry" shirt on. Meaning it. Looking at the faces, it was as if everyone was having a collective holy experience. Beatific smiles that you couldn't help but return. 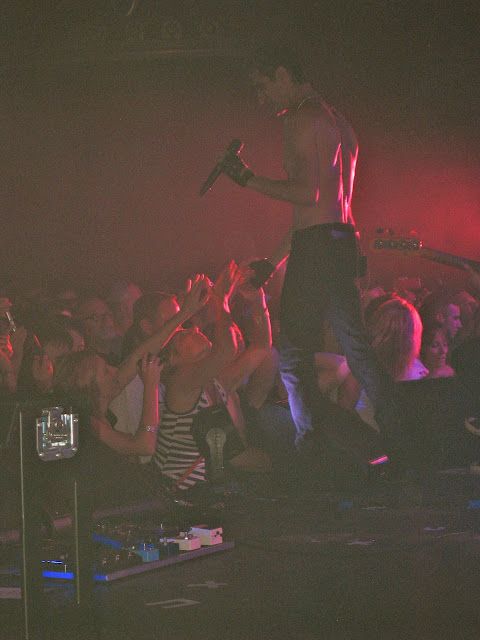 "What are you drinking?" asked Perry to one guy, who replied, "I Would For You!" probably thinking he should get his request in vs. answer the question. "You're drinking I Would For You?!" 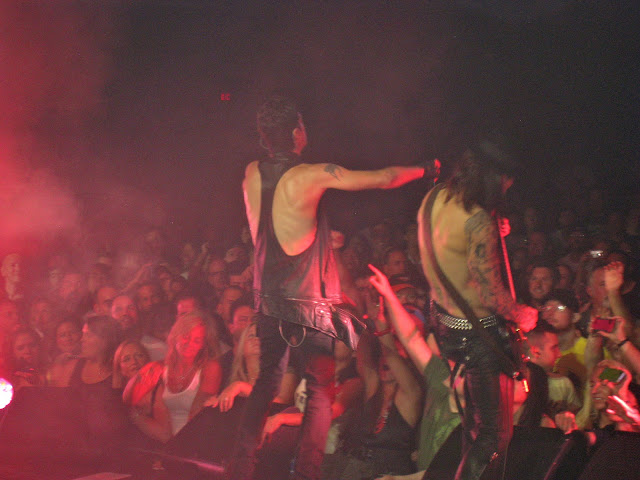 But instead they got "Up The Beach", which is so massive you could only throw your head back and soak it in. Dave's guitar on that is full Pink Floyd huge, and I had chills the whole time. Which carried over into "Had A Dad", because it too is beyond big. 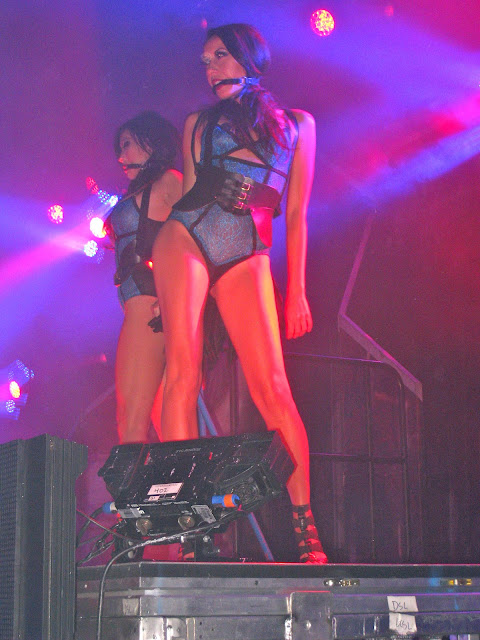 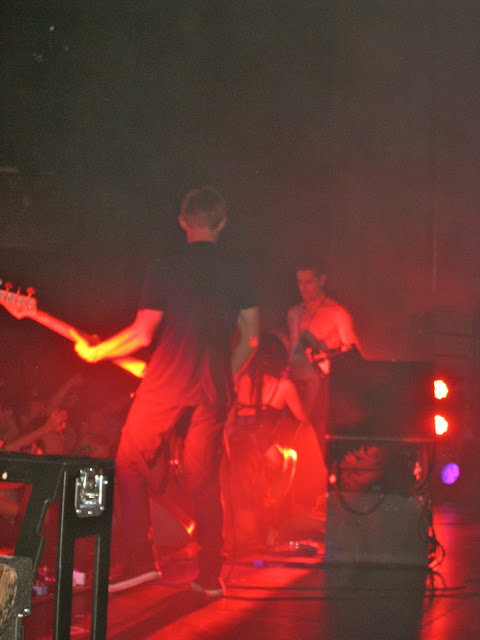 Aside from the obvious hot as hellness, the music on this one takes you on an epic journey, with Dave and Chris Chaney's guitar and bass swirling around Stephen's heavy drums that had the drooling fans hooting and hollering at how very metal it was. 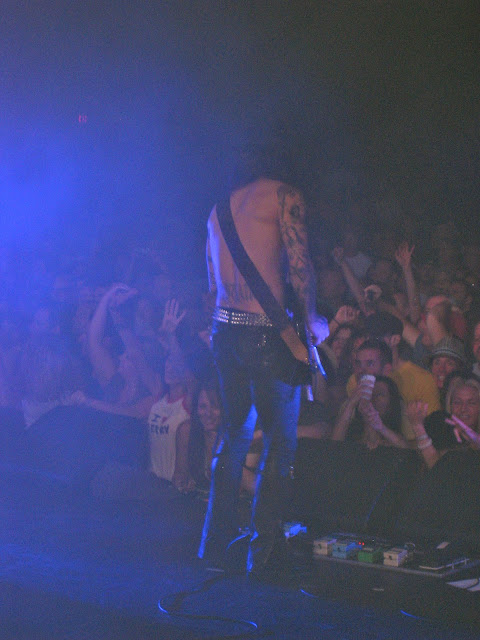 After the screaming and stomping and clapping for an encore reached frantic proportions, Perry came back out and said, "President Perry told you so, you work your ass off, so you need to party your ass off!" and no one disagreed in there. 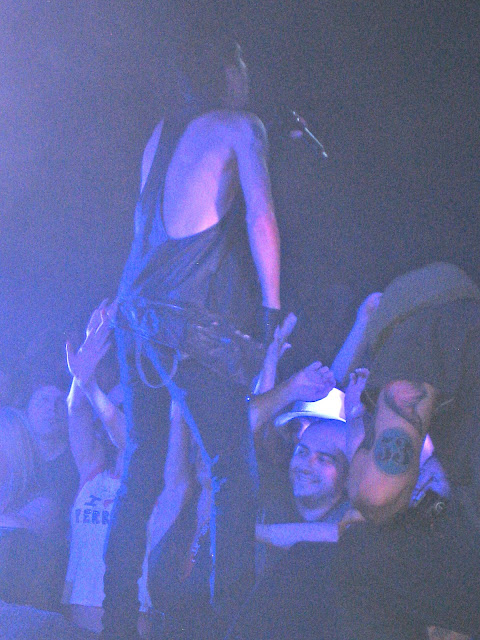 They gave them the awesome "Splash A Little Water On It" that went right into "Ocean Size", where I don't believe I'd ever seen Dave so animated or Perry so possessed by the moment. He was rolling around on the ground, giving his fucking ALL to these New Jersey people, who were jumping and holding up their arms like it was the first and last show they'd ever see. 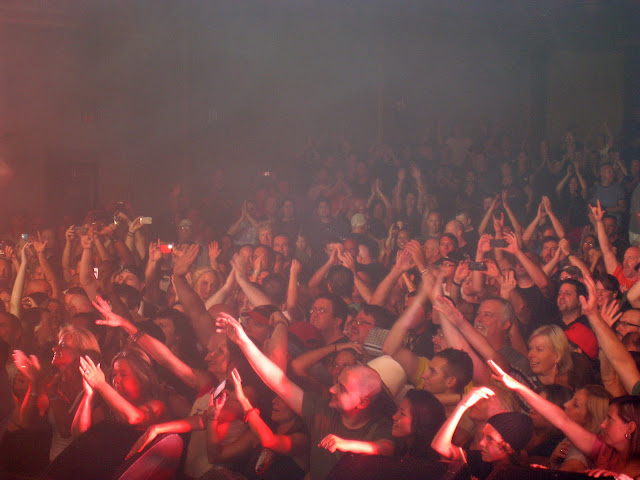 "Stop" was last and when it got to the part everyone knows every word to: HUM along with me, hum along with the tv, hum along with the GODDAMN RADIO!!" the poor State Theater's roof was blown off and I don't even know where it went. But it did have to Stop, and when the sweaty and spent band left the stage to people shouting for even more, it was a group that knew they had kicked some serious ass. The crowd looked it too, wrung out, but joyously happy. 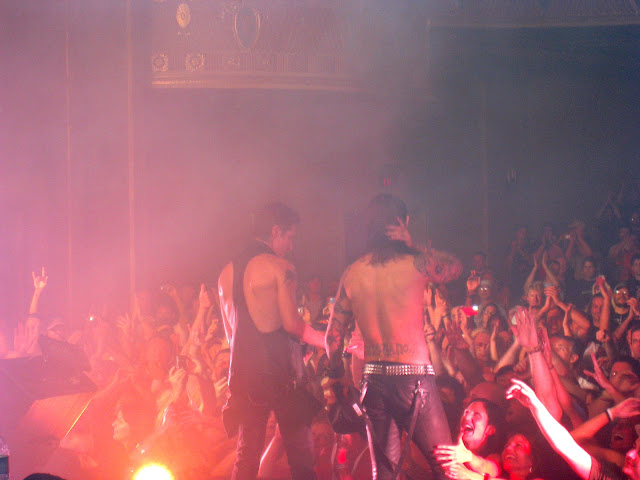 As was I. It was a complete blast going along on this leg of the Jane's Addiction journey, and documenting it along the way. I'll have these monumental memories for a lifetime, sad as I was to wind it up for now. I am blessed. I am inspired. I am thrilled that I get to know these creative, talented, visionary people, and even more so that I get to call them true friends. 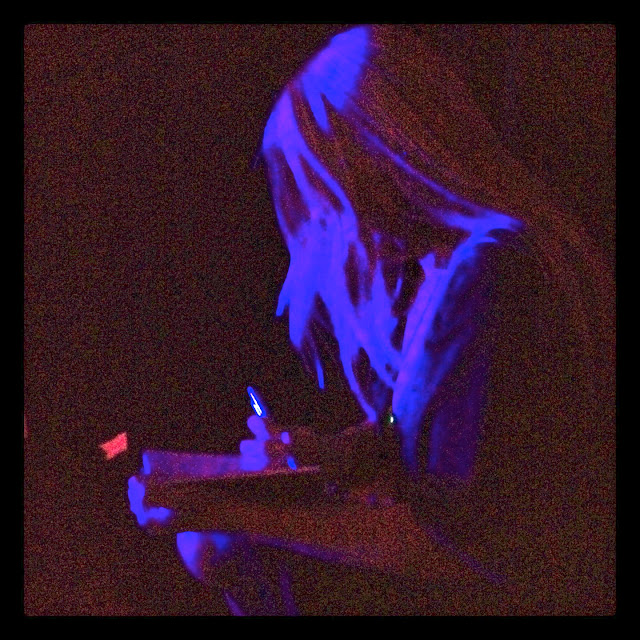 THANK YOU from the depths of my heart to Perry and Etty Farrell, Hezron and Izzadore, Dave Navarro, Stephen Perkins, Chris Chaney, Stephanie Spanski, Bubba Carr, Doug Goodman, Monique Sanchez, and all the crew, drivers, venues, and places that we rocked together ... for sharing your world with me ... and the whole world. Wow. For the people at the rest of the tour stops, I sure hope you all get out to see this tremendous show, because you will carry it with you the rest of your days. I know I will.

And Summertime Rolls on ....


*Bus and Me photos by Mr. Bubba Carr.