A fun drive from Syracuse on the tour bus that included learning poker, making up drinks ("Multiple Orgasms", anyone?), watching the beautiful, green rolling hills, and insightful conversation made the time fly by, and before we knew it, we were pulling into the site for the Jane's Addiction show in Bethlehem, Pennsylvania. 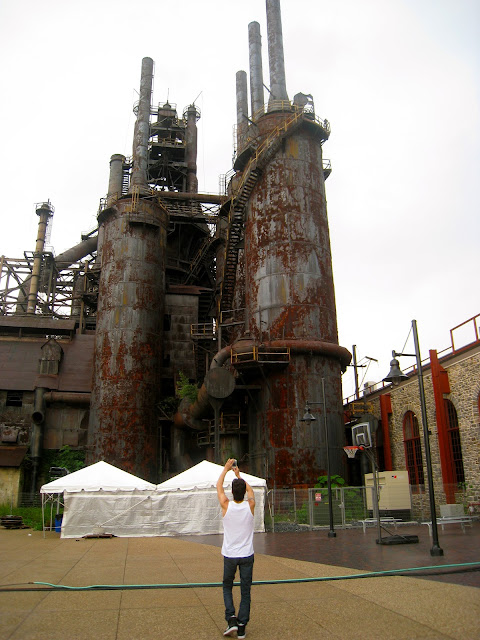 The setting was straight out of a Tim Burton movie, with abandoned steel factories and small town charm together. The word that kept coming up for the outdoor "Steel Jam" venue was "ominous". 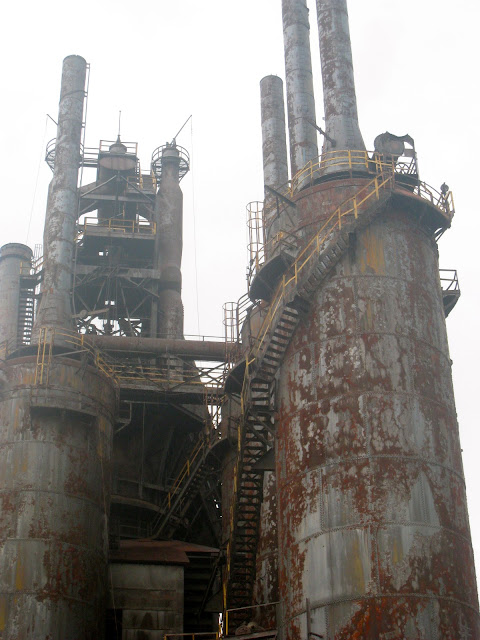 The skies added to that effect, as storm clouds alternated with blue skies and made no one sure what would happen this evening. We killed some time playing hoops and having more smart talks, and Perry sat down to reconfigure the set list for this show. He knew that people had purchased tickets to multiple shows, so it's important to him to shake it up a bit each night and give the folks something new. 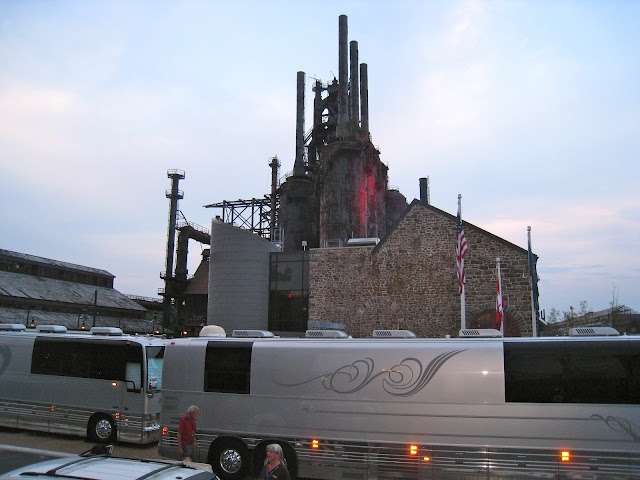 The thing is ... musicians travel the world in a more unique way than most occupations you can think of, and see the conditions of places and the moods of people in a real and tangible way. They FEEL the places they play. Some of them just want to rock and party and that's all cool and part of the deal. but some of them also want to touch and help people - even if that just means stoking them senseless by seeing their favorite song played by their favorite band. That is certainly the case with Jane's Addiction's Perry Farrell, shown recently by the announcement of Lollapalooza Israel in 2013 (And leave the politics out of it - people everywhere want to rock and hear great music. Walls and ancient grudges have no place in that fun. We're talking about building bridges, not burning them), and Lollapalooza in general, as created by Perry. That thing has been, since the first one - that I was at -  the most diverse, thoughtful, enlightening jamboree ever - and it has sustained! And then they did it again last night by bringing the full stage production of The Great Escape Artist tour to kind of out of the way Bethlehem, PA. 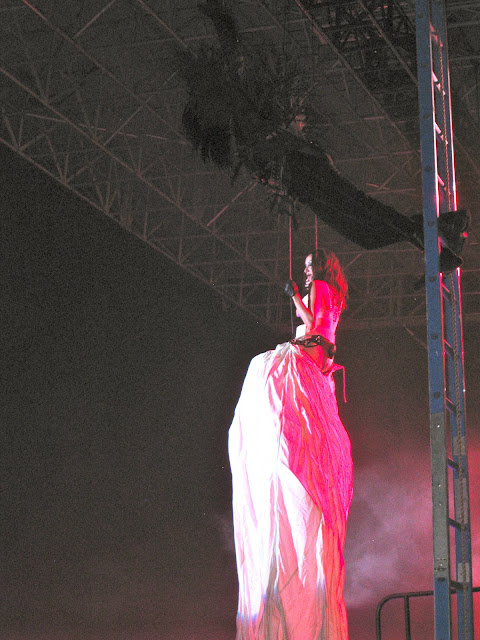 Band of Skulls opened the show, and as I'd just seen them at Lollapalooza, I opted to explore and chat and stuff as they played in the background. They're pretty good, but the fans were obviously there for Jane's (as was I).

Before they even took the stage, people were losing. Their. Shit. Smaller towns don't really get to see the bands they love as much without traveling a long way, so for these guys to be setting up in their town, the thrill was plainly evident on all the faces present. They were screaming out requests way before the guys took the stage ("OCEAN SIZE!!!") in the hopes that wishes would be granted. 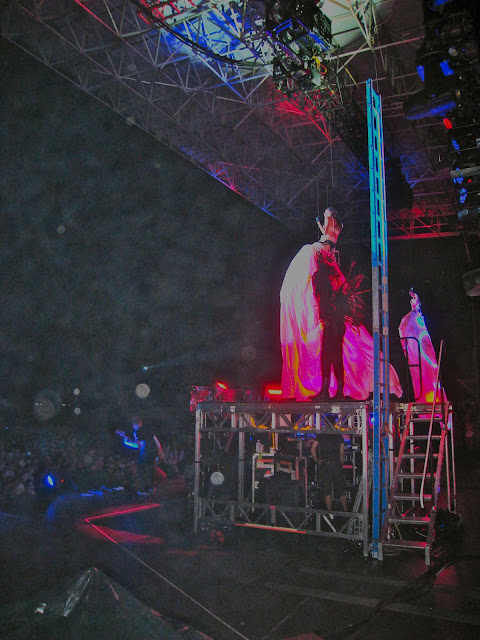 When the lights went down and Pink Floyd came up, it was wild out there. I felt hoarse just listening to the yells. Then the guys walked on stage and all hell broke loose - MAYHEM! They opened with "Underground", and the sight of Etty and Steph up on their swings in their huge white skirts and Bubba in his bird man costume spinning from a rope and Jane's Addiction wailing out this new classic sent these Pennsylvanians into space. But then they started in on "Whores" and Oh. My. This was by far the most crazed I'd seen the people yet on this tour. That's really saying something too. 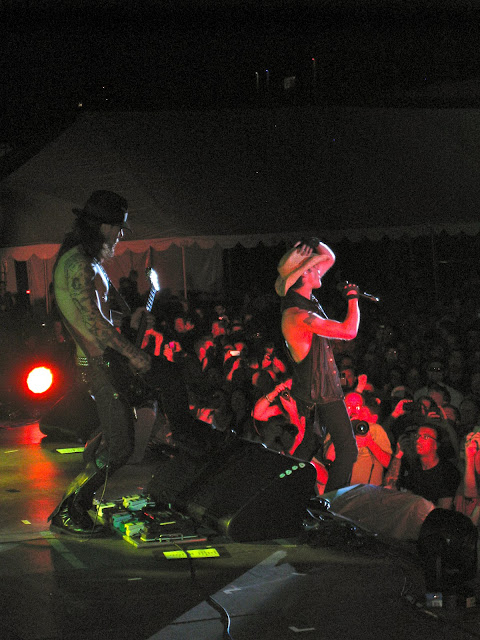 "Just Because" let 'em have it, and a fan let Perry have their cowboy hat, which he donned and made someone's whole year. Perry was in rare form, spinning and twirling and jerking and ON it, exactly how they probably imagined him.  "Been Caught Stealing"  really had them freaking out, the most yet, to the point where Perry said, "Bethlehem!! Babies are gonna be born from tonight, everyone's gonna be having sex!" 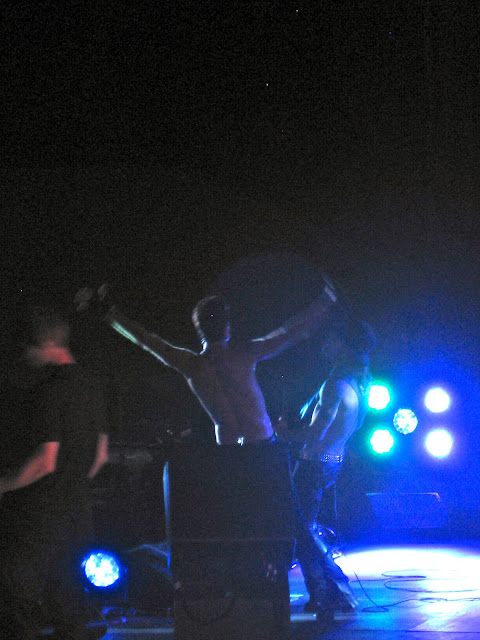 That's what it felt like, especially when I peeked out at the beaming faces and pumping arms on every single body there. The band was definitely feeding off of the crowd energy, and this was the most pumped up I'd seen them go at it yet here out east. Phew. 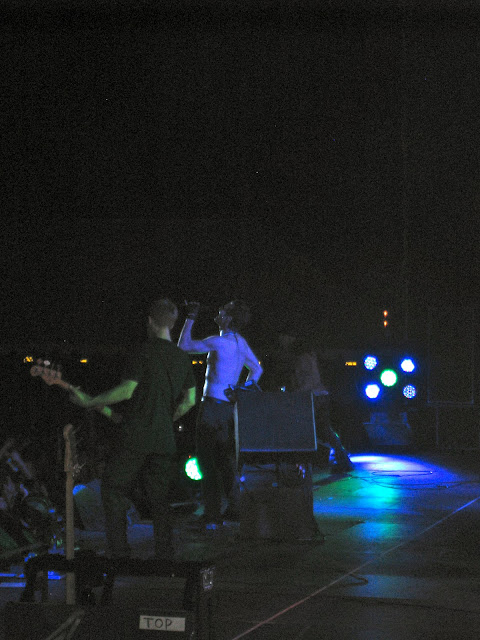 They hadn't yet played the new and massive "Irresistible Force", and it was indeed massive. Etty swan and sang from above and you could feel that force between her and her husband, even from a story or two up. They are great. 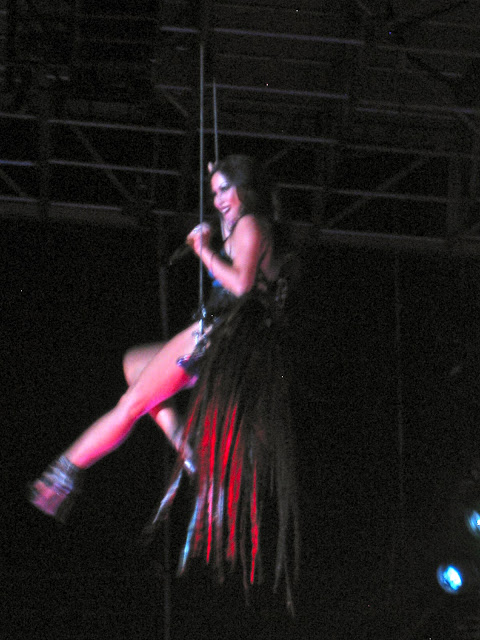 Dave was tearing up solos like he was possessed and Stephen and Chris kept the beat so heavy that you felt it through your feet and up into your heart. I love this stuff so very much, and yet it can't be anything compared to these people who have seen their factories closed, jobs shipped away, bank accounts dwindle, and they still come out and pay for a spendy-ish ticket and feed that part of themselves that is special and necessary to their soul. 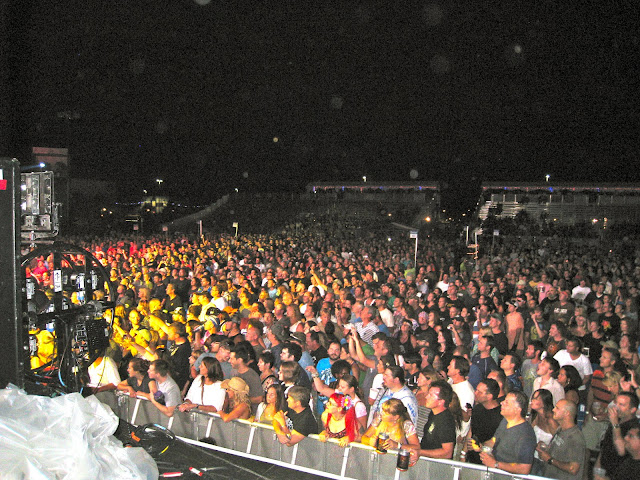 Nothing yet compared to their reaction at hearing "Mountain Song" either. Whoa. I wish I'd taped the BLISSED out screaming when that one began its familiar opening, as a ringtone or something. I mean, it was a very happy place.

And then just as soon, it was off. I saw the backdrop come down and heard Perry say, "We're so sorry, we'll come back through, we love you, Bethlehem!" What?!?! Everyone was looking around, bewildered, including me, and then a guy came on the P.A. and asked everyone to leave, orderly and safely, as severe weather was coming through. An electrical storm was shaping up to be a doozy and the show was over. Boos to the skies rained down as the real rain kicked in, and we all looked at each other like, What. The. Fuck?! And again, that was nothing compared to what the fans must have been feeling after FINALLY getting to see this band live. People were going to hear "Up The Beach"! Everyone felt terrible about it. 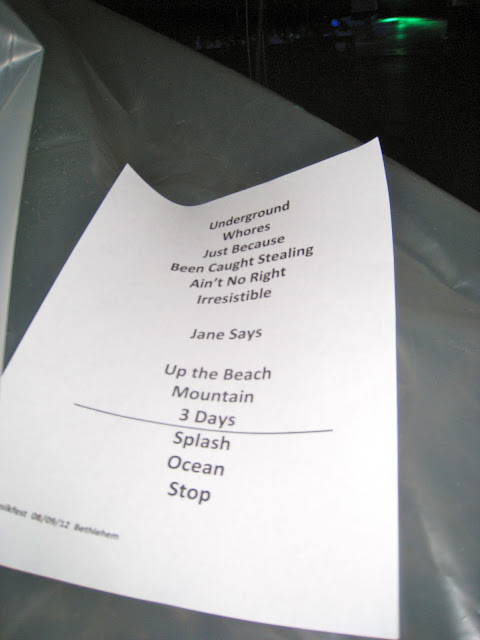 Back on the bus, we had to wait it all out, as we were to drive through the night, so had to wait to load in and all that. Perry kept trying to come up with solutions and after some chat, was like, "Let's just sleep on the bus HERE since we have a day off tomorrow, and do this thing here again!" A great and generous idea, from a great and generous gentleman. But it didn't go over as well with the entire tour production, that is a train that has to keep moving. After talks about downloads and stuff like that, it seemed to be settled on that Bethlehem people could have their tickets honored at an upcoming Philly show, that's relatively close by. Still, a major drag for everyone involved. Man. 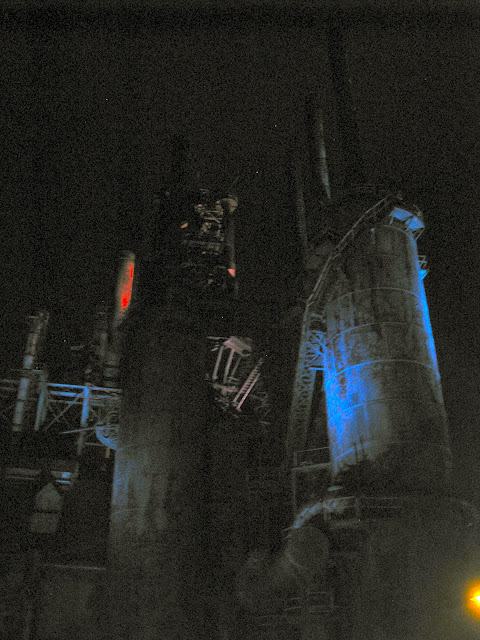 It's twice now in a week that a major show (first day two of Lollapalooza, and now this) has had to have thousands of people evacuated on account of weather - both of which wound up being wuss storms that blew over in none too gnarly fashion. I guess you just can't be too safe these days. Or can you? Frankly, I don't think a person in there would have cared to go out in that SHAZAM blaze of lightning bolt glory in that COMING down the MOUNTAIN! moment (and there was some impressive bolts, but still ...). But it's also the hottest summer on record in this country, crops are suffering, as are people, and we really gotta get our act together as a human community and revamp our situation with nature. I mean, C'mon. While we sort out exactly how to do that, and influence and implement MAJOR change by whatever means we can (and sometimes that's just starting the conversation, through talk or rock), we have to start caring more about what MATTERS.  I'm not going to preach, I'm just going to say that a whole lot of people spend a whole lot of time and money and their LIVES wasted on stupid b.s. Like petty differences over PEOPLE. Like fear over education. Like material over internal. Come on! We all see it every day, in so many ways. Just MATTER instead. In the best way you can. At least care. 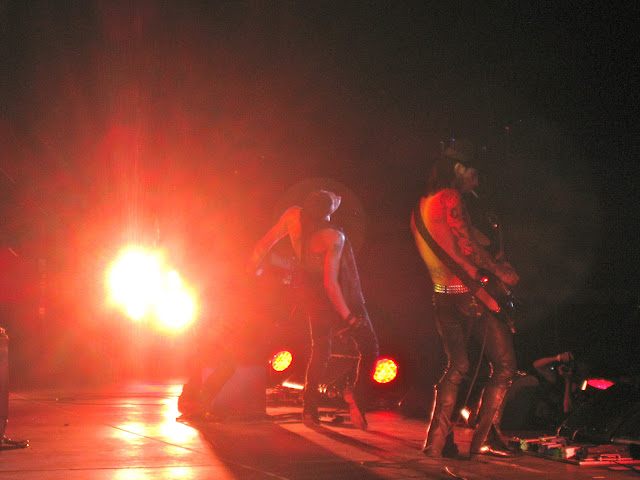 More than that even, remember to go for it and have the best time you possibly can in every breath you're given ... because these are crazy times, and you better rock it while you can.