Lollapalooza - Day One Of The Best Time Ever

I have arrived in Chicago for Lollapalooza 2012, and it's already exceeded all expectations. I'm fortunate (and mind blown) to be the guest of the Farrells/Founders, and as you can imagine, it makes it a rather unique and perfect situation to see all the world's greatest bands perform at what I truly believe is the best festival of all time. Check out just Day One alone! 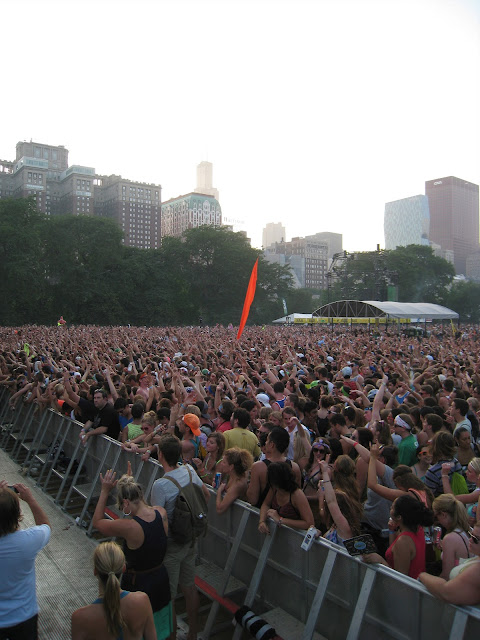 It is oppressively hot in Chicago, but bright blue skies, and bright spirits (really, every single person I encountered was in the very best mood - all day and night) made you not mind a bit. We had a fun night before, arriving to town late and heading straight to Prosecco in downtown Chicago to join the Farrells for a homemade limoncello Lolla kick-off toast. Yum.

We got to beautiful, impressive Grant Park just in time to see Michael Kiwanuka on the Play Station stage. I had just read an article on him the night before, and just as I walked up, the talented guitarist and singer strummed the opening notes to my all time favorite song ever (and that's a hard decision, but I have come back to it time and again) of any genre, "May This Be Love" by Jimi Hendrix. What a wonderful omen and way to start off an incredible three days of music. Kiwanuka and his band (featuring two drummers on two drum sets) ruled it - not easy. I was impressed. And stoked. 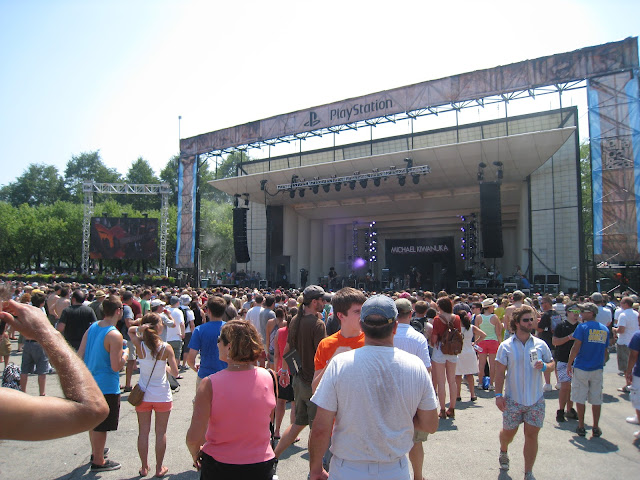 Good omen number two, and even better, was when we were standing there waiting for a golf cart to take us to the Artist area to meet up with all my friends, and no volunteers really seemed to know where to send us. RIGHT then, up pulls a cart driven by my friend, Smitty, from years of Rage fun. We hopped right in, had some laughs with him, and he dropped us off right where we wanted to be - the back stage of the back stage area, Farrell compound. 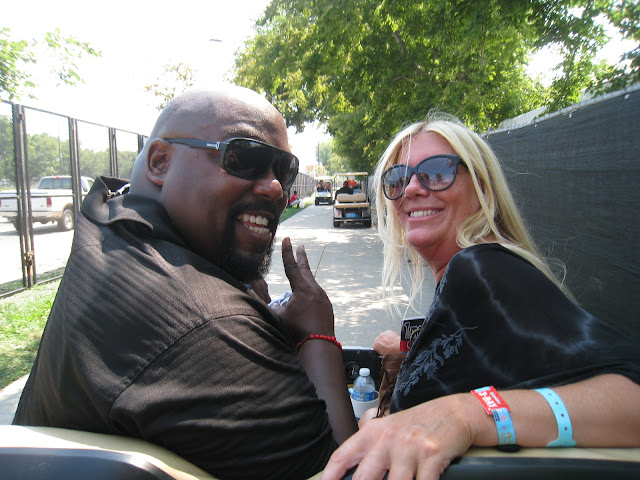 We had some champagne to toast all the fun we were about to get into, and lapped up the chilly AC before heading back out to explore. We may have lagged longer than necessary, and missed a good chunk of afternoon bands, but it was hard to leave the bubbles and the cool. But we did. 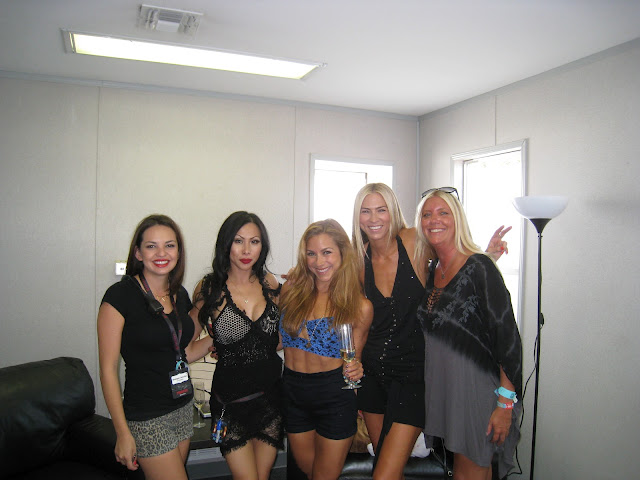 And glad we did, because the golf cart ride - driven with confidence and hilarity through the throngs by Etty Farrell (in a highly covetous frock by Rodarte for Opening Ceremony) - was quite an experience. We finally gave up on following the Perry driven cart because he would be stopped every few feet by adoring and grateful fans wanting a high five or a photo, and we wanted to get to Die Antwoord. They were awesomely awesome. 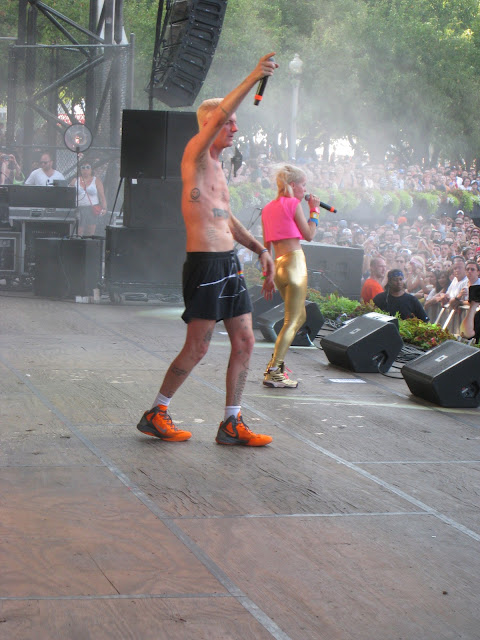 The crowd didn't seem to mind the heat a bit, and were all squeezed in, shoulder to shoulder, loving every super fast beat. I Fink U Freaky! Ruling. 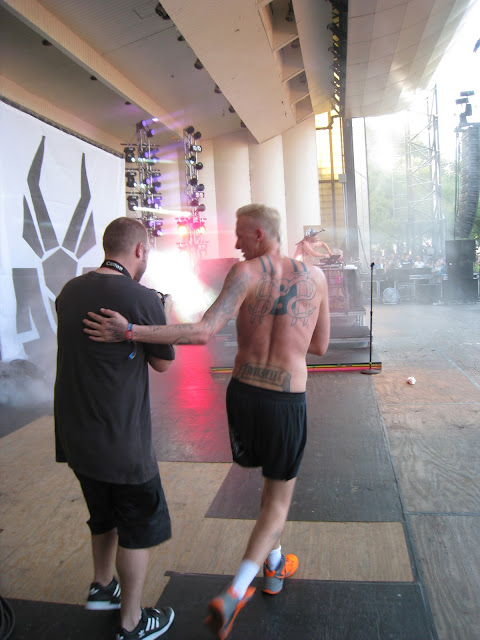 Their energy was infectious and pumped us up to keep the carts going on to the next good time. 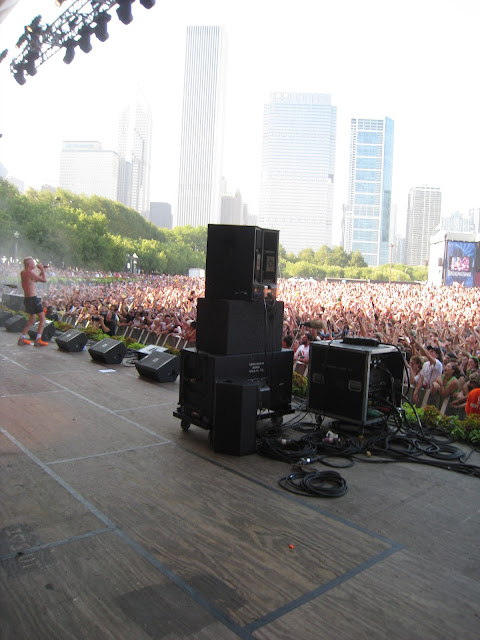 We sped over to see thenewno2, Dhani Harrison's band at the BMI Stage. He had some die-hard fans wearing some Eyes Wide Shut kind of masks (that must have been uncomfortable, so they must be really loyal people) to enjoy his lighter, poppier jams. 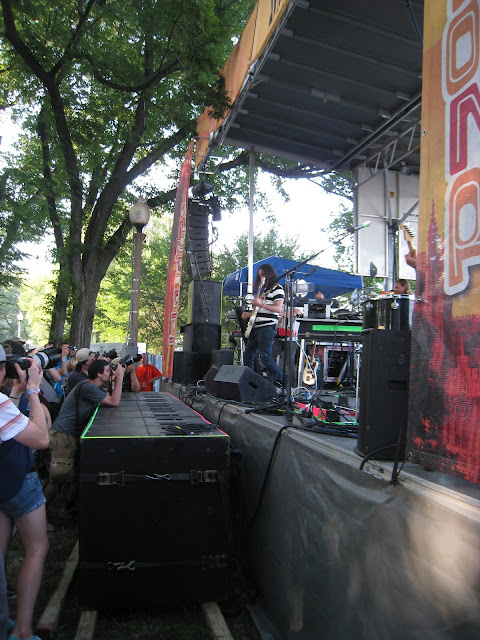 That didn't last very long for us, as people were hungry, and Perry had been raving about the lobster corn dogs. Yes, lobster. 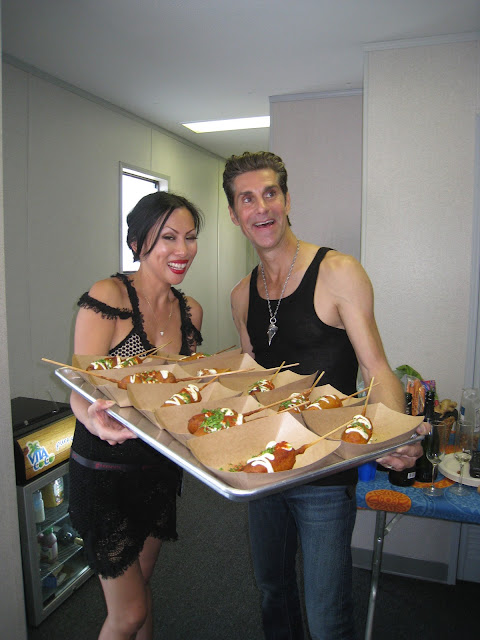 He was right, and thus fortified, we all carted up and headed on out again to do fly-bys of M83, Band of Skulls, and then all the way over to catch Passion Pit, who had a huge crowd, all extra into it. 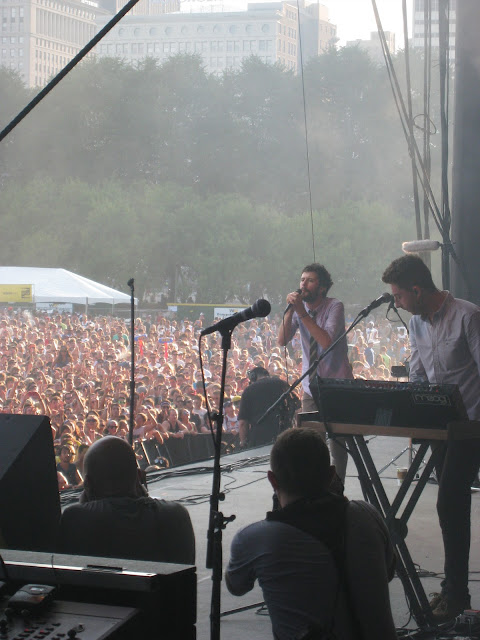 The same goes for Nero, playing Perry's Stage, who I think had the most exciting crowd jumping, energetic scene of the day so far. I felt instantly rowdier. 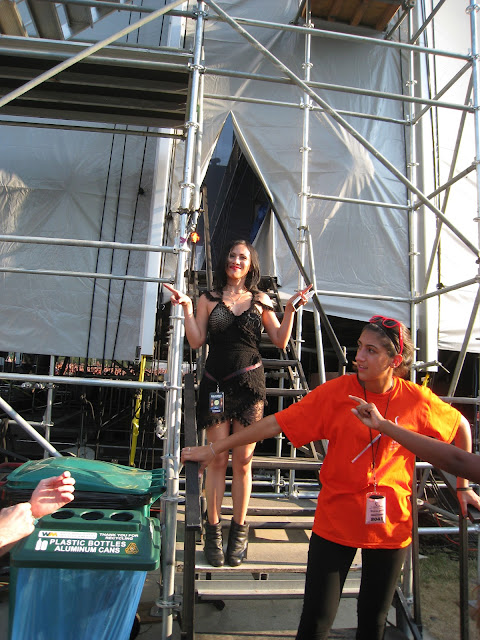 We had a little break to cool off again, drink up, and gather the posse to hit the big Bud Light stage to see ... BLACK SABBATH!!! 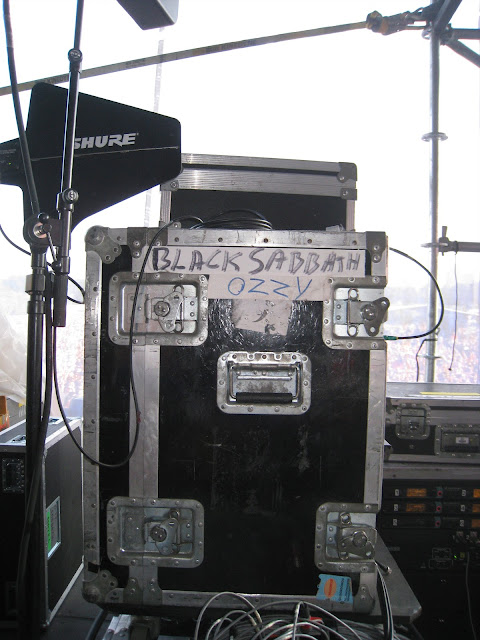 One of my favorite memories - of the day and probably up there with ever - was when we walked down the center aisle to head to the sound board to watch, following Perry. Every single person screamed and held out their hands for Perry to slap, and you could hear them all yelling THANK YOU above the din. Rightly so, as this festival is well thought out, so well planned and executed, so FUN, that everyone should be thanking Perry for all time. It's his vision, and the people know it. 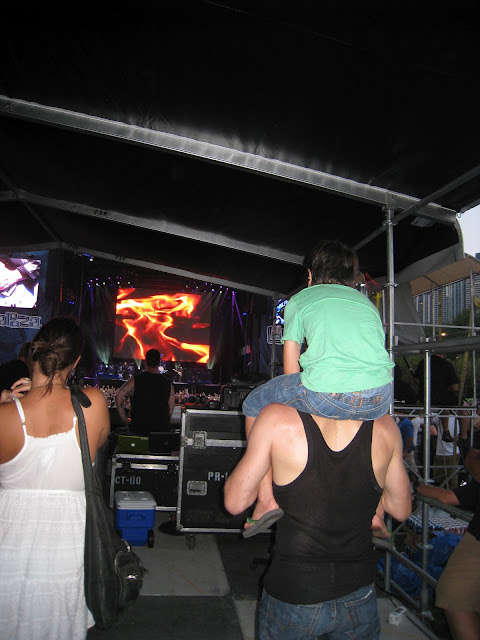 I was just happy to be there, but even more so to see it all so up front and special. Black Sabbath from the sound board!! 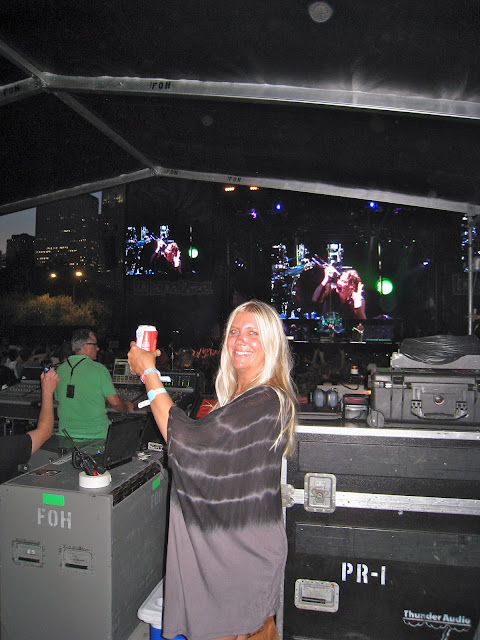 Everyone was wondering how Ozzy would do these days, and I'm here to tell you that the guy KILLED it. Like eat a bat's head off killed it (figuratively, these days, of course). 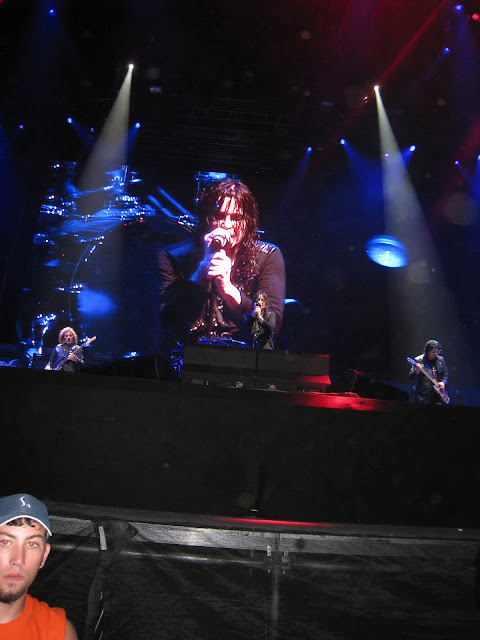 The band was so tight, the crowd was so into it, and the respect for this band was palpable. (To the extent that we all skipped The Black Keys, who I also love. But C'mon - it's Sabbath!!) They played all the classics, from War Pigs to Iron Man, and then we walked back through the crowd to watch from the stage. Black Sabbath from the stage!!! 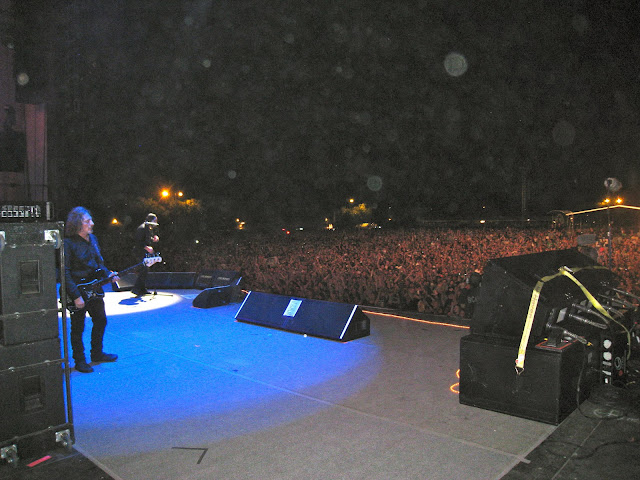 There's not much I can say to follow that tough act, so suffice it to know that we ALL had a complete blast. By we, I mean everyone in remote ear-shot of that fantastic first day of this fantastic festival. I gotta go now, as it's all about to start all over again. 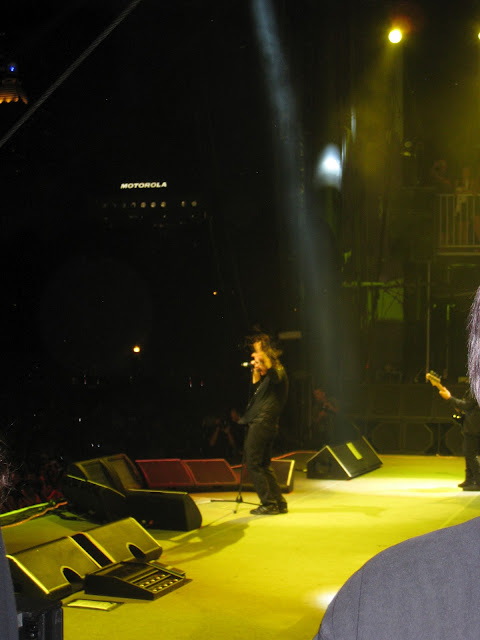 Wish you were here, if you're not! Finger horns held high, my people!