Ooooohlala! Palooza. Day Two was very dramatic with the evacuation of the Lalapalooza site due to serious weather rolling in. The officials erred on the side of caution ... because all was clear in a few hours, and the park re-opened for the remaining bands and people. Not for us though, as by then, all the way back at the hotel, and the heat having made us lazy ... we decided to chill until the big after party that evening at the Aragon Ballroom. Starring Jane's Addiction! Sad to miss a bunch of bands, but the Aragon show wound up being so good that it was fine. Better than fine. We rode over to the venue in the truck with the Farrells, and I could see Perry gearing up to throw down. A remarkable feat, considering he'd been dealing with the evacuation of the entire festival and cancelling bands and phone ringing every second ... but now it was showtime, and he is a true showman. In a Pimp hat. 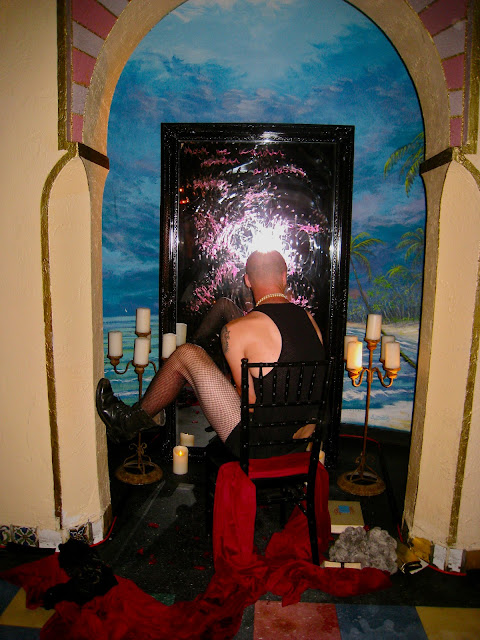 The Aragon Ballroom is a big Moroccan looking room, and on this night it was JAM packed with adoring fans, sweltering in a place so hot I thought it was going to rain in there. Costumed actors walked around among the crowd, feeling each other up, taking a bath, climbing chairs, checking themselves out in mirrors ... generally creating a trippy, Fellini-esque vibe. Perfect. 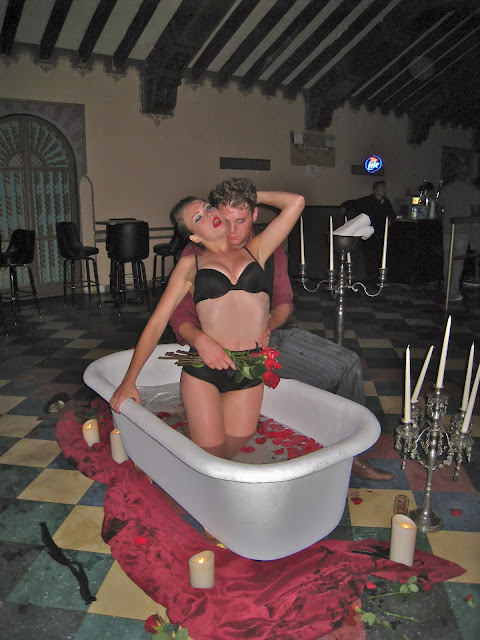 Franz Ferdinand was already on when we arrived and I wound up liking them more than I thought I did. They played all the hits ... plus a bunch of better ones. I have to admit, I was a bit preoccupied, as we were doing laps around and rounding up posse members to watch the Jane's set together. It was getting more exciting in there by the minute, even as conversations had to continually be interrupted by mopping of brows and breaks in front of giant turbine fans just to not pass out mid-sentence. 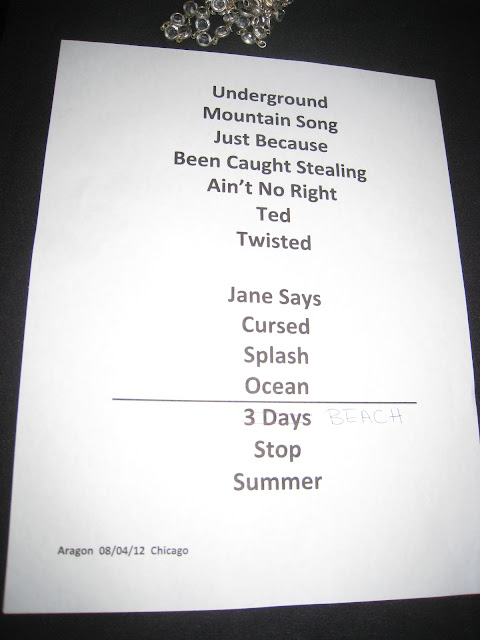 I was just grateful we were up in a balcony near a fan vs. squeezed in down below so tight you couldn't fall down faint if you wanted to. People were losing water weight in front of our eyes! 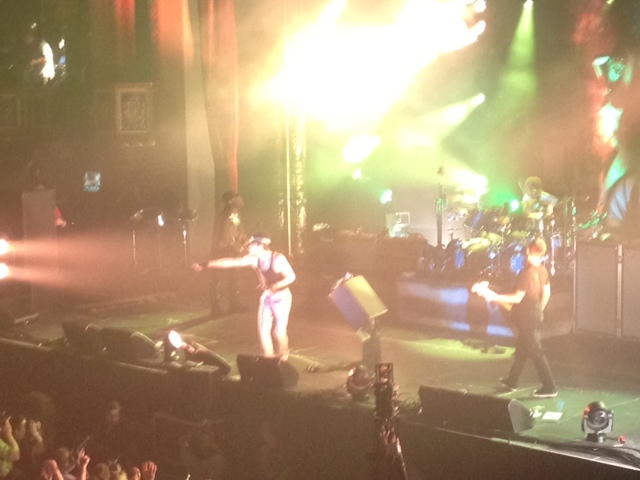 Pink Floyd set the tone and the shouting grew for Jane's, and when they took the stage ... well, my ears are still ringing. They blew right into "Underground" ... "Mountain Song" (I want to say a crowd favorite, but they all seemed to be!) ... "Just Because" ... (a shout out to Billy Corgan from Perry, and a bigger one to Chicago at large, which sent the place more bezerk) ... "Been Caught Stealing" ... (I'm throwing basically just a set list at you now, because I gotta hit it and get out to Day Three any minute) ... "Ain't No Right" ... 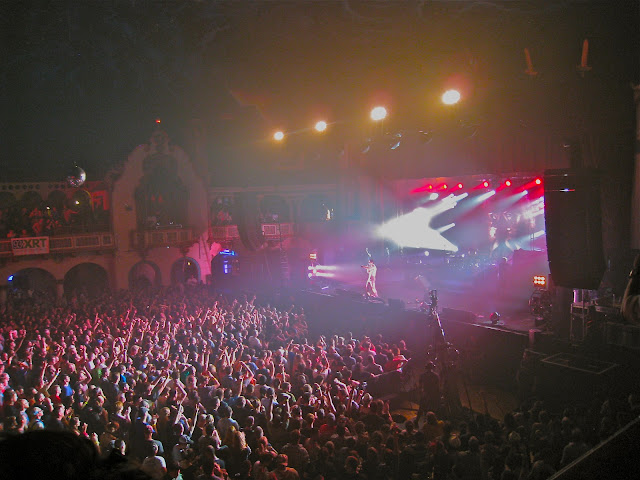 Sexy videos were playing on the screens and Etty Farrell and Stephanie Spanski were suspended above the stage on trapezes in gigantic white hoop skirts, that must have been suffocating to operate in that green house terrarium of a hall. Holy God, was it hot. Stephen Perkins told me later that his feet were actually slipping off of his drum pedals every time from being so hot and sweaty! Bubba Carr was lurking around in full mud man costume, but I couldn't really see him from our side balcony and it was too hot to traverse the packed house to go anywhere else. I admire these performers greatly, because that was WORK. Same goes for the fans, because it was sweltering - but once the jams kick in, nobody cares. We're all in together. Rock and Roll. 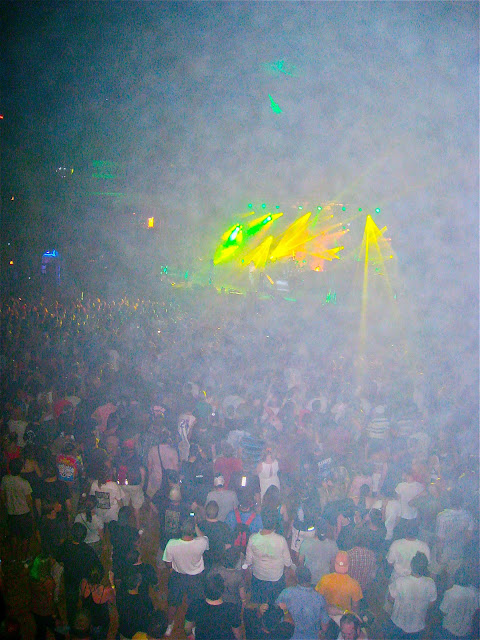 Everybody, Everybody .... so began Perry singing "Nothing Shocking", and absolutely everybody was singing along and freaking out. "Have fun, get laid, Rock and Roll is all about fucking, right?" Perry just breaks it down. 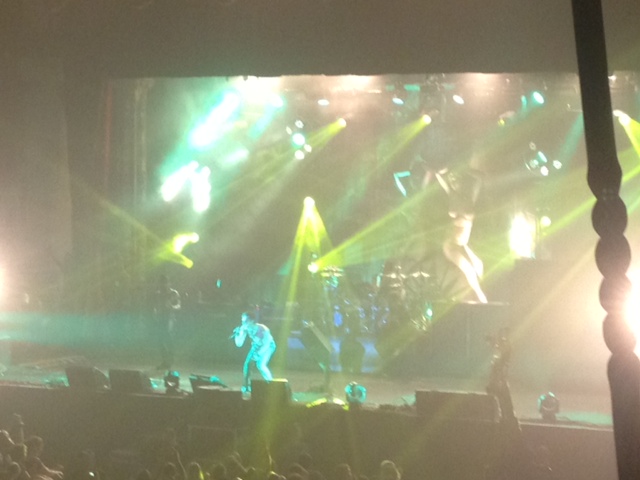 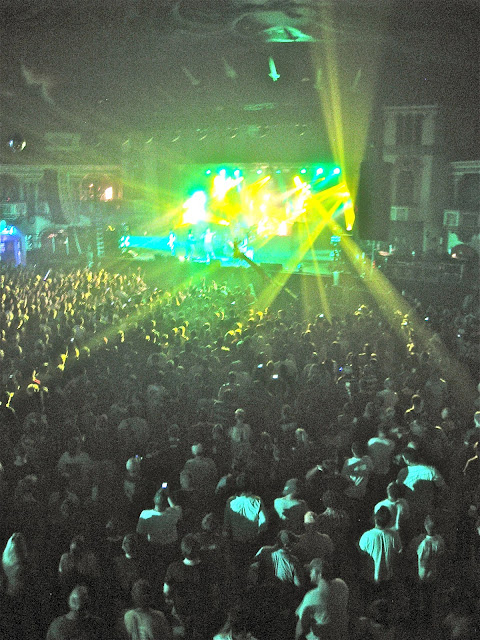 But then, and I've never heard it live before, and it's tied for "May This Be Love" as my favorite song of all time, was SUMMERTIME ROLLS!!! It was sublimely beautiful and heavy and I just feel complete. But there's so much more kicking off right now, that I am bursting with gratitude, and still not complete. The place went insane, we all carried on into the night, and now here we go again.


*Pics by me and Stephanie Hobgood