I finally got over to see the Neo Povera show at L & M Arts, in what I sadly heard will be there second to last show. The Venice gallery is closing for good this fall, in what will be a big loss to the local art community. I'm not sure why (usually it's a money thing), but I know for sure that they will be missed.

Before you even go inside (or even if you don't), you can enjoy Andy Ralph's sculpture, Manifold Destiny, 2013, which is a bunch of artfully placed chain-link fences. 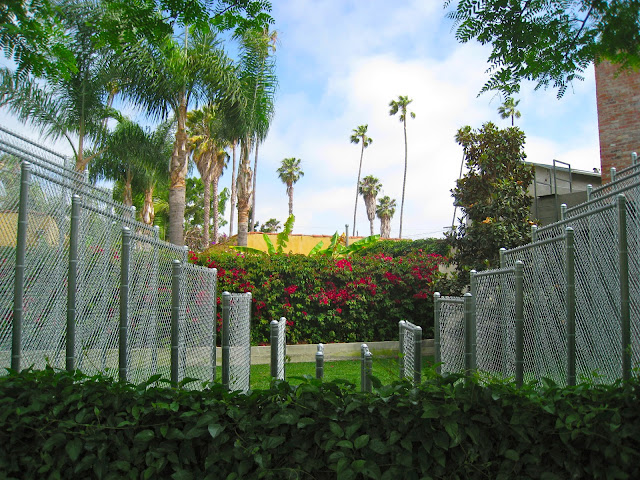 The show is based on the Arte Povera movement of the late 1960's, which translates literally to "Poor Art". The Artists all worked with accessible materials in an attempt to blur the lines between "elite art and the colletive experience. 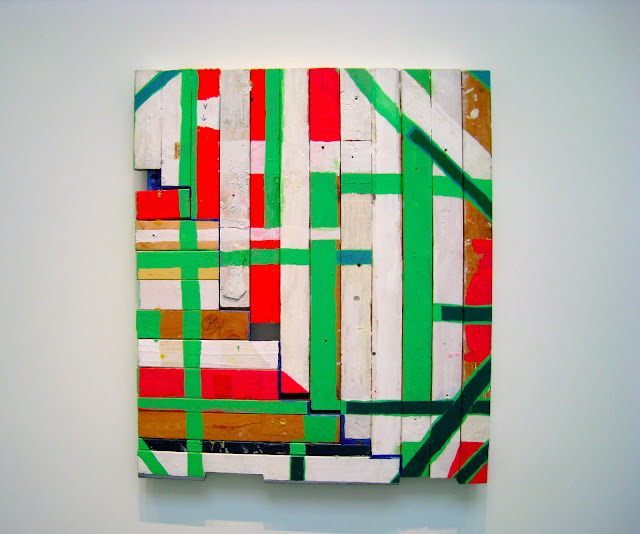 The press release explains it well, with an excerpt from the manifesto by Germano Celant, outlining the original movement, Notes For A Guerrilla War:

"Over there is a complex art, over here a poor art, committed to contingency, to events, to the non-historical, to the present ... to an anthropological viewpoint, to the 'real man', and to the hope (in fact now the certainty) of being able to shake entirely free of every visual discourse that presents itself as univocal and consistent. Consistency is a dogma that has to be transgressed, and the univocal belongs to the individual and not to 'his' images and products."

In other, less lofty (everyday) words, it's art made from everyday stuff, that anyone can get, and create with in their own vision. 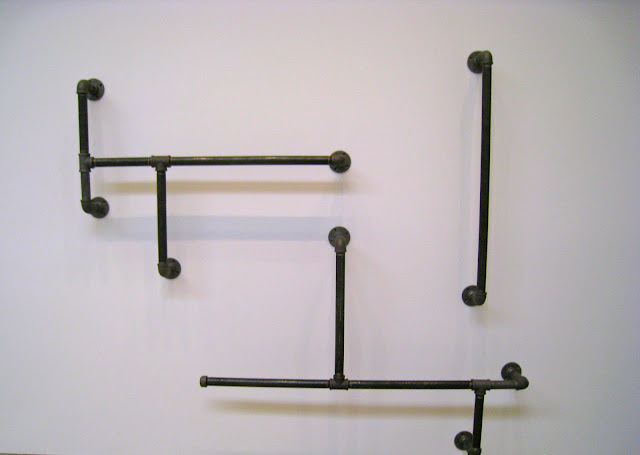 So you get Maya Lin's take on a Manhattan phone book. 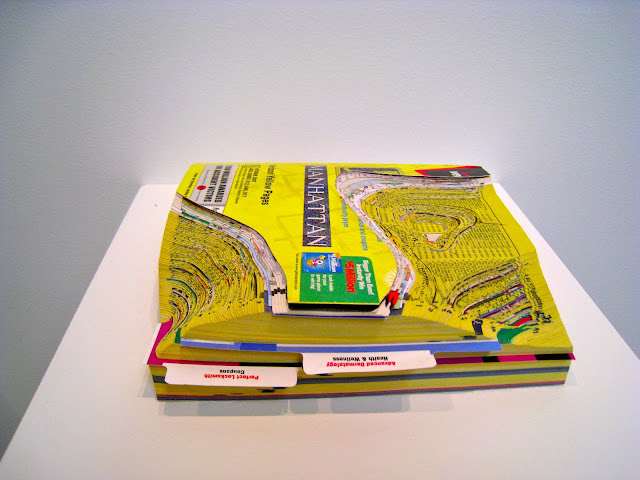 You get Karla Black's cellophane sculpture, Spared The Sight, 2012. 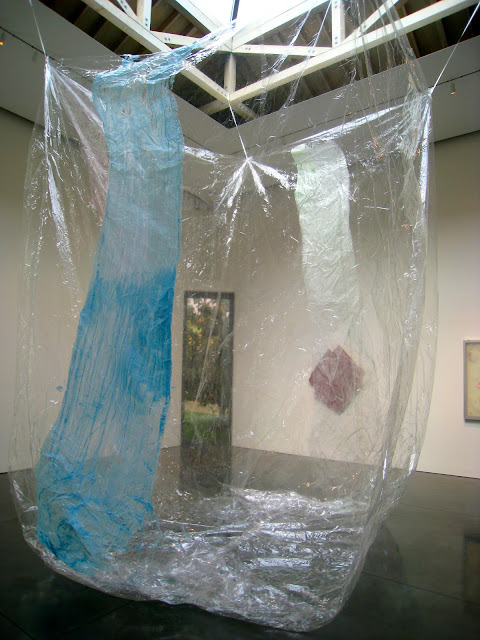 A piece that looks like just a regular old Igloo by Patrick Meagher. 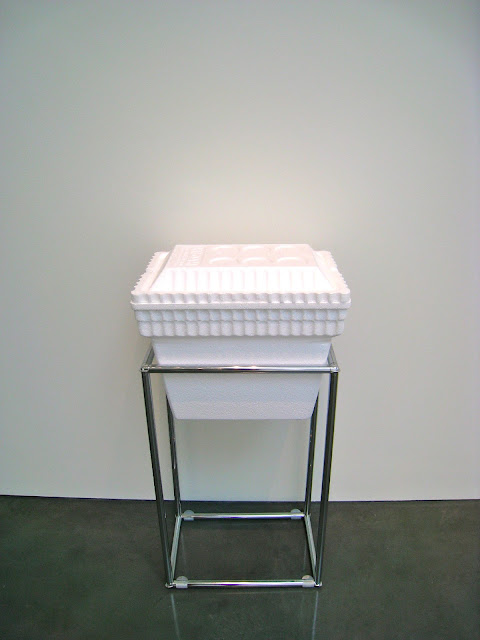 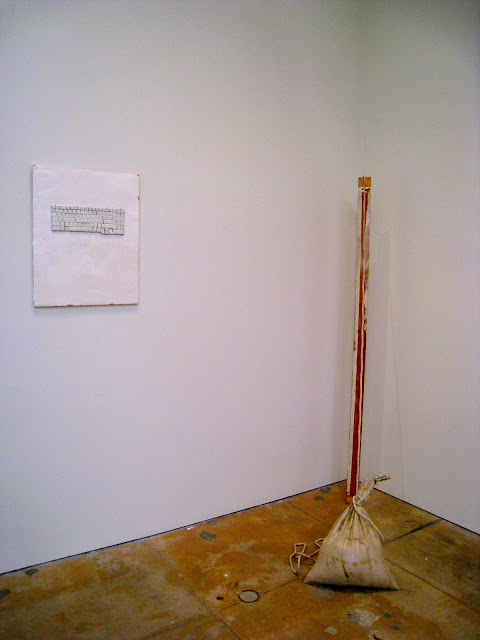 None of the works were labeled (which always bugs me), so I'll just share some with you that I liked, but don't know the titles or artists of, and didn't want to keep asking ... 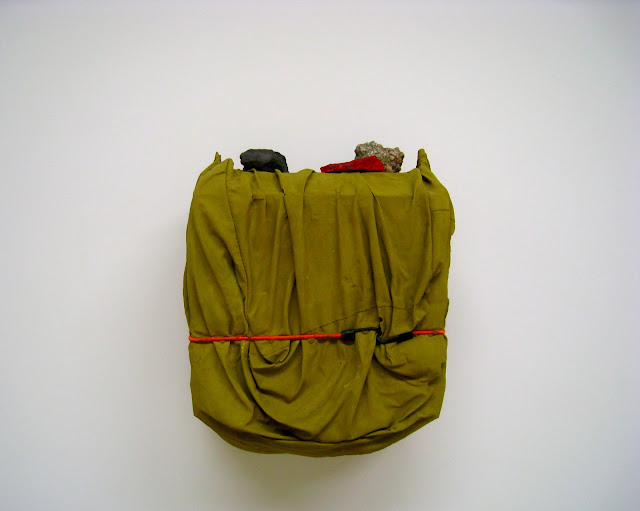 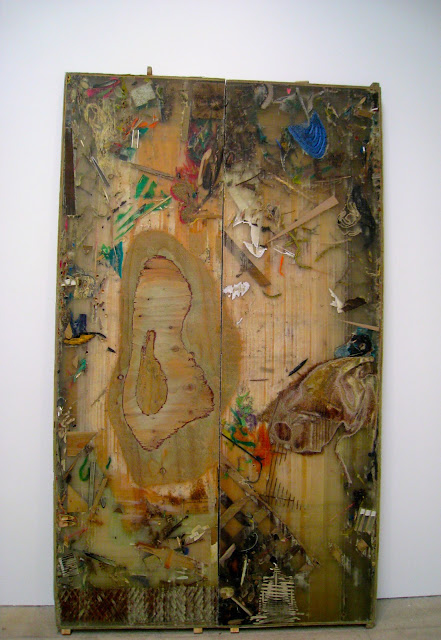 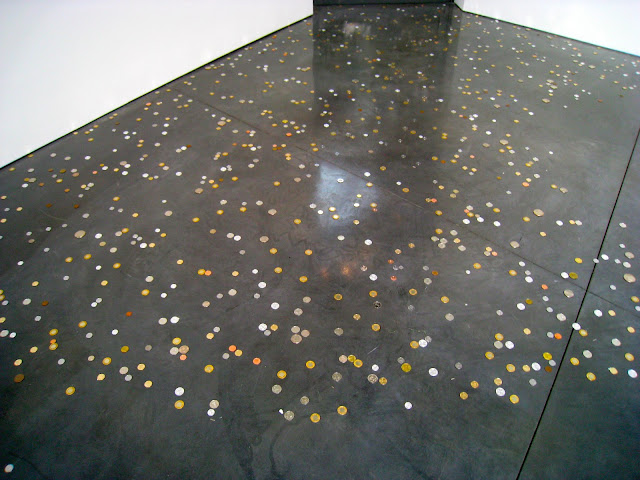 I come from a railroad family, so I liked the repurposed railroad tie sculpture back outside by Marianne Vitale. 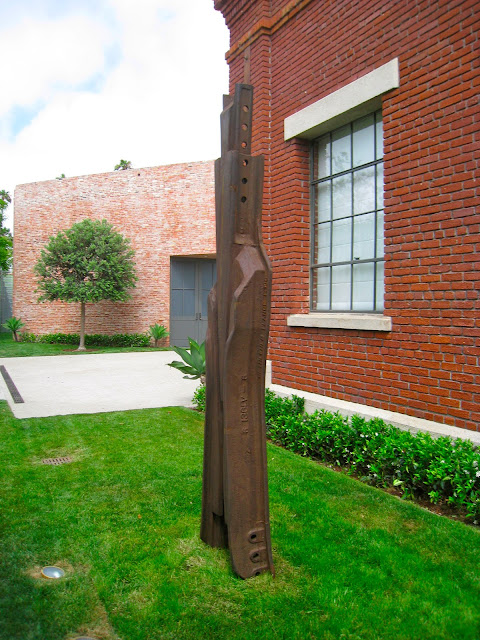 All in all, it reminded me a bit of the Fluxus movement, where the premise is that everything can be art. Everything can be SEEN as art. And you should go see this very interesting show, while you can. It's on until July 6th, and then there's only one more exhibition at this wonderful space. 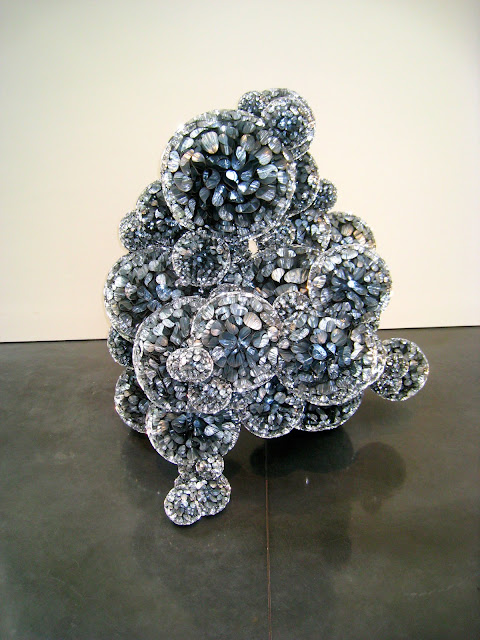 Which I guess means we all need to make more art, more accessible, and pick up the big slack that will be left when L & M is gone. Venice is up to the task, as art IS everywhere here.

Posted by CJ Gronner at 5:16 PM No comments:

People in Venice are funny ... 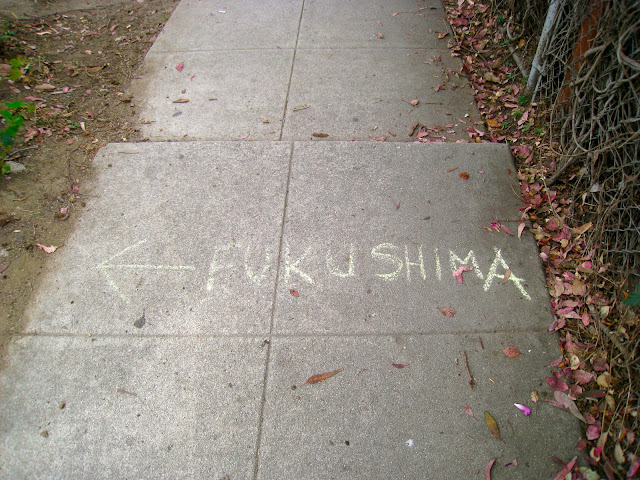 Even though radiation from Japan is no laughing matter. They say it's coming? 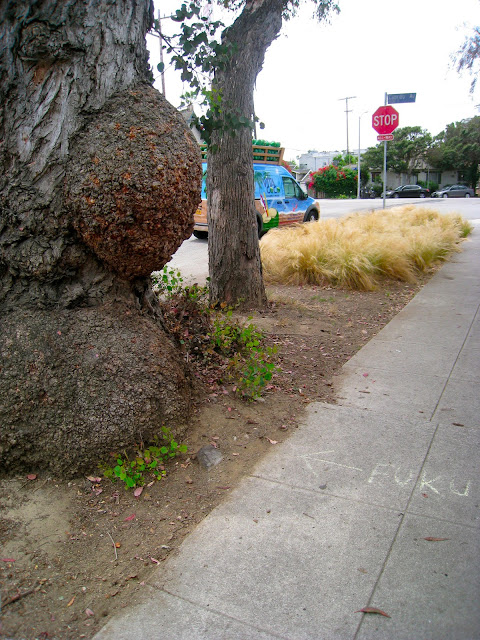 You gotta laugh to keep from crying in this crazy world. And it's yet another example of how we're all in it together.
Posted by CJ Gronner at 12:47 PM No comments:

The Date Rape Of Venice

The guy looks good, seems nice, talks a smooth game, makes her feel special ... then the next thing she knows, she wakes up all dazed out, wondering what happened. If Venice were a human being, I'm sure she'd be feeling date raped right about now.

I've been crazy busy lately, was out of town, and only during the recent Art Walk did I have the time to cruise the whole Abbot Kinney stretch. I felt a little woozy myself. What the hell are all these chain stores doing here? What happened to the Venice Unchained organizers? Why is everyone just bending over and accepting it? It's bizarre. It feels like with the departure of such Abbot Kinney stalwarts as Surfing Cowboys and Jin and Glencrest and Lily's and Capri, the spirit and the HELL NO of the neighborhood may have departed as well. But I hope not. I've had many conversations about it lately, as you can imagine, and there are very intelligent and thoughtful people here among us who care and have good ideas, but it takes MORE conversation among ALL of us, and then action. ACTION. You vote with your dollars, as you know, and you don't have to spend them at places that don't groove with Venice. (You know who they are just by looking at them ... Scotch & Soda? Flannel? LF? Lucky? GANT? Really?!?!) Then they don't survive, and then they go away. Or you can just accept it all, and live like every other suburban mall-goer in the nation, and forget that you ever moved to Venice because it was different, and meant something special to us. But then the terrorists win. The Venice I moved to would never let that happen.

I don't think it's hyperbole to call it terrorism, either. Corporations are pretty much terrorists against individuality. The way giant stores have gone in and decimated local businesses in small towns across the nation might as well have bombed them, for all the damage they've done. A neighbor of mine called what's happening in Venice "Financial Genocide." Again, no hyperbole, really. The big dollar people have come to town and are systematically trying to get rid of all the people who can't afford their ridiculously greedy terms. And God forbid you want to crash in your car or van like surf bums have since California learned how. Towed. Ticketed. Arrested. B.S. (*Side bar: Of course you will Vote NO on OPDs if you love Venice the way it's supposed to be. Free.)

I recently had to move - again - from a place I really liked, after just a year, because of another sketchy landlord in Venice. This time I was tortured out by constant heavy construction in the downstairs unit daily for 6 months solid. Deafening sledgehammer-type work. Every. Day. There wasn't working water in the bathroom for the whole month of February. There was a film of dust covering everything, every day, even inside the drawers. It could not have been healthy to breathe this in every day. When the landlord, one Mr. Sheppard Solomon of West Hollywood (who told the back neighbor he "just wanted a piece of Venice") and his henchman, Noel Vietor (what a piece of work that guy is), were asked for rent compensation for these outlandish conditions, when they finally responded - which was rare - they sent a text that said, "If they don't like it, they can get the fuck out." Nice. Very Venice. So I got the fuck out, sadly, and that dude then tried to take $1,100 back from the deposit to repair the bath tub they wouldn't ever come to repair. Yep. This charmer (whose main claim to fame and fortune seems to be writing Paris Hilton's "Stars Are Blind" song - great) is now trying to get $3,700 for a two bedroom apartment on Westminster a block from Oakwood Park. Don't give it to him, Suckers.

Right before I moved, I was riding bikes down Lincoln Boulevard with my friend, when he saw a white guy, probably in his 30's, slide the manhole cover in the sidewalk aside, climb out, and do a morning stretch like he'd just gotten up for the day. From sleeping in a SEWER! 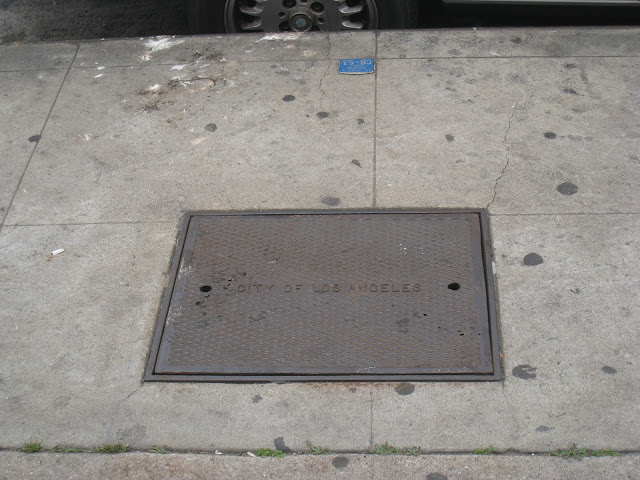 We went back later to investigate, but as I have a major rodent issue, and we weren't exactly invited, we decided to let it be for the moment. The image has been seared into my mind though, and the question looms ... Is this what we've come to? If people want to stay in Venice and they can't afford the premium rents we're being raped for, the sewer system starts looking like a good option?! In talking about this with a few people, I learned that this guy from that day is not alone, as descriptions of other people talking about sleeping down there do not match our guy. Wow. 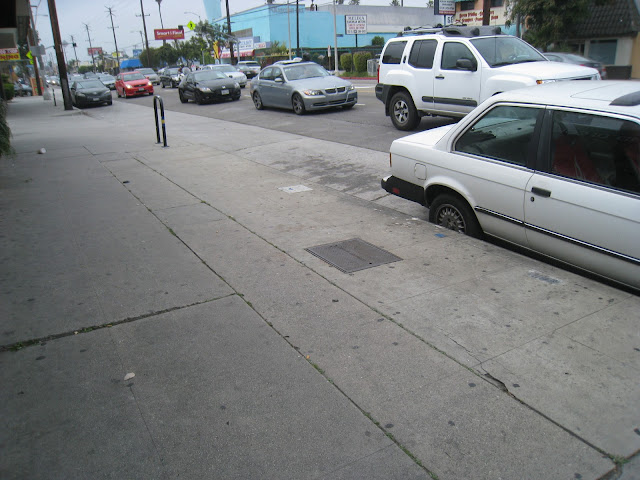 I've been called a bit of a hippie (mostly for my principals I'd like to think, and less my hygiene) sure, but I can accept that change is gonna come. Everywhere. But as my friend Travis Lett said, "Yes, but there's a way to edit the change." I thought that was right on, as Travis and his business partners operate Gjelina, which is a smashing success, but also a very Venice institution. All three partners have lived in Venice over a decade plus, and care about the community to the point where Travis has said that for him, Gjelina couldn't be anywhere else. That's the feeling of Venice to me, that you couldn't be anywhere else. That's why I moved here. That's why I love it here. That's why I thank my lucky stars every time I walk the beach and wave at an old-school local, both of us breathing in the beauty and freedom of being at the very edge of the country - physically and mentally. The beach is still the most authentic part of Venice, and that has to be protected .. and trust me, the corporate letches are coming for it, with some pretty big dollar Rufis to slip in the unsuspecting beach business owners' drinks.

So be strong, Venetians. Don't abide it. The Dude wouldn't (C'mon, it was shot in Venice). You might think it looks all nice and safe around here now, but then you wake up all messed up because you thought you moved to a bohemian paradise, and then you opened your eyes to be just like everyone, everywhere else. Let's work together to preserve what's left that's special and UNIQUE about this place we love.

I'm reminded of the quote by Marcus Garvey now, when he said, When all else fails to organize the people, conditions will.


* You can get Defend Venice shirts like the top photo at www.venicebeachhead.org.