Ronald Weekley, Jr. - Skateboarding Is Not A Crime

I just came from a rally for Ronald Weekley, Jr., the kid that was beaten by police August 18th for skateboarding on the wrong side of the street. In Venice, California. That alone should tell you how wrong it is, but watch the video below and see for yourself -

How horrifying to be there watching that still happen in this day and age! And how inspiring and chill inducing it was to be there this afternoon with a Venice community that CARES, and is demanding action. 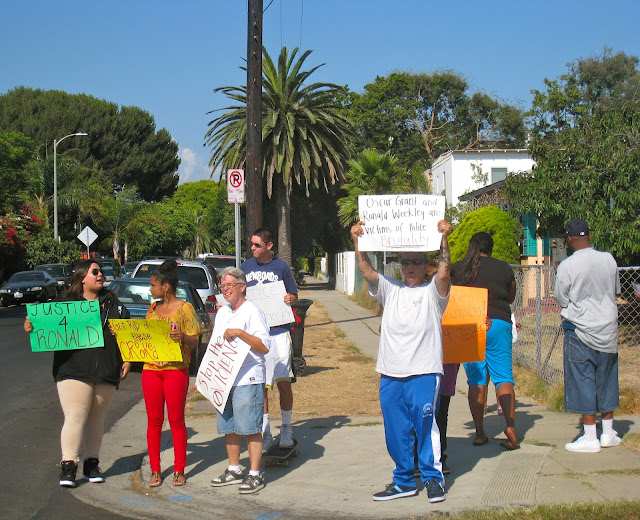 Weekley Jr.'s skater friends were there, his classmates, his neighbors, the news, and people that had never heard of him before this despicable incident, came out in support on a gorgeous Venice afternoon, as cars of strangers drove by and honked their support. 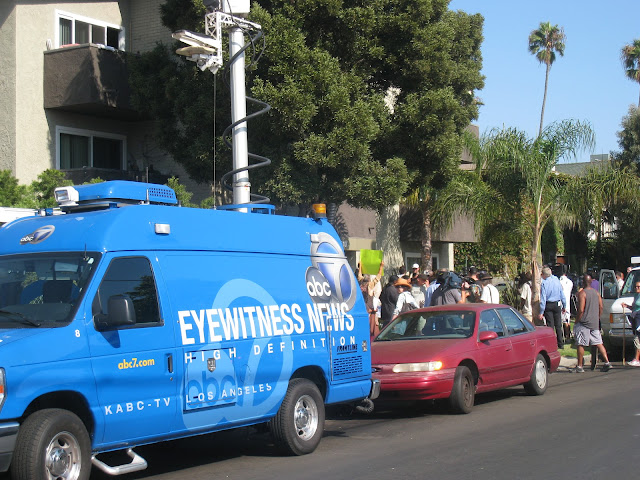 The Police line is that the young skater was violating traffic code by skating down the wrong side of the street (who hasn't?), and then resisting arrest for this blatant crime (who wouldn't?!). Then it was somehow decided to have four cops beat him up. In broad daylight. In front of his home that he was skating back to. He has a concussion, a broken cheek, jaw and nose, and frankly, he looked a little like a Picasso painting today. For SWB. ("Skateboarding While Black", as one of the speakers said, and which appears to be so sad, but awfully true. Sorry, but you consider the neighborhood, the kid doing nothing anyone else doesn't do every day in Venice, and it really does look like his afro was his main problem. Which sickens me just to type). His father said that his son had thought he was going to die. In front of his home. For SKATING! 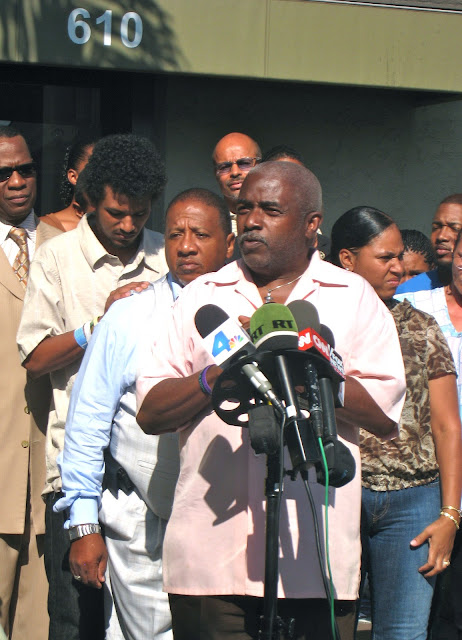 Weekley Jr's very well-spoken and unbelievably calm considering father, Ronald Weekley, Sr. addressed the gathered crowd and brought tears to my eyes with his considerate and heart-felt words. He clearly loves his community, and wants kids of ALL colors to skate safely in Venice. He said people have asked what the family wants, and it is simply to have their son's charges dropped (he had to spend a night in County without visiting a hospital first!) and the police officers that committed their own crimes against Weekley, Jr. identified and charged publicly. In other words, JUSTICE. Which IS what we want, and we do want it NOW, as the chant went. 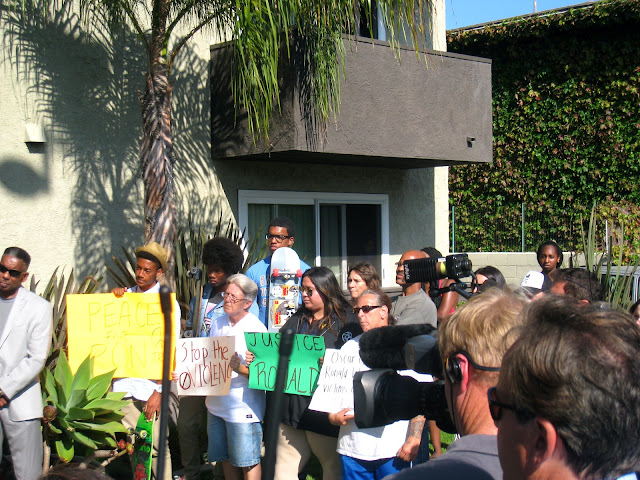 Mr. Weekley, Sr. went on to say that they hold no vengeance, no hate, and they are practicing forgiveness, but "forgiveness in context". That's right. He asked for skaters around California (and the World) to join together to combat police oppression, and "Redefine what it means to protect and serve!" That got a round of applause, as did most everything everyone said. When they weren't crying. 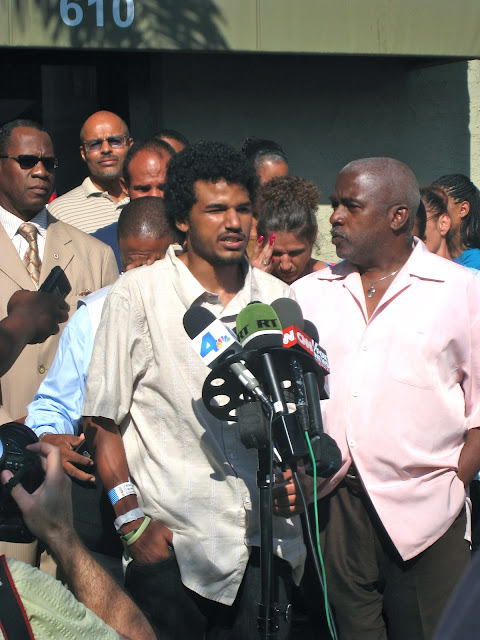 Like I was when Weekley, Jr. took the microphone stand and cried himself as he very softly said, "Don't be angry at what happened ... Just help people that need it." What a special young man, that he already lives in a place of forgiveness, and himself is moving on to looking how to help others. 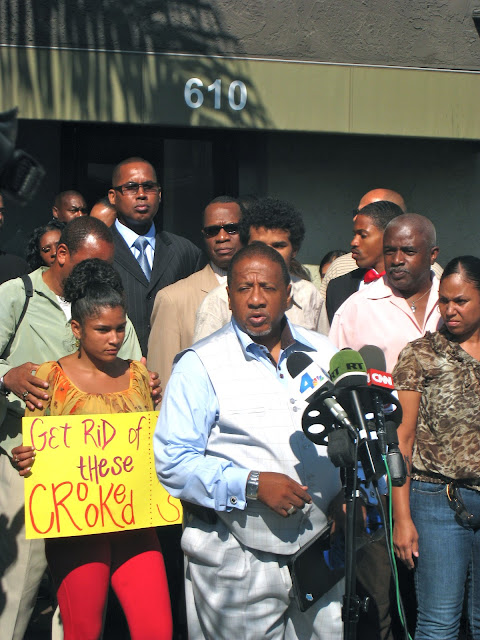 Obviously we have a big problem with police using excessive force in this country. It happens far too often to deny it. Now the press has it out that Weekley Jr. had warrants out for traffic misdemeanors  (that almost everyone in Los Angeles has also had), but who cares? Police can't tell you have warrants by looking at you, and warrants don't equal beatings, even in our antiquated law books. The Weekleys have retained Benjamin Crump to help them, the same attorney who handled the Trayvon Martin case. The Nation Of Islam were there today, standing in solidarity in their bow ties, and their Tony Muhammad reiterated that "This is not about color, this is about justice." 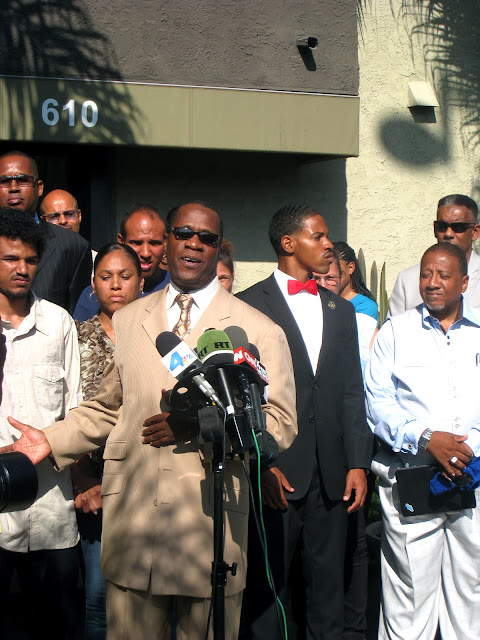 Al Sharpton called the family, and let them know that the whole nation is watching Venice now because of this. Venice 2000 and the Venice Neighborhood Council were both represented, and all claimed to be in it "for the long haul." Police need to be re-trained in cultural sensitivity, and as their Pastor, Horace Alan, of Westminster Baptist said, "We are ALL human beings ... and human beings need to be treated better than laws." Amen.

Ronald Weekley, Sr. took the microphone again in closing, and expressed his family's gratitude for everyone there, for this "Community of HUMAN BEINGS", and again said all they want is for kids to be FREE to live and play safely in Venice. Everyone wants that. For it to be the police themselves making that NOT the case is abhorrent, and Venice won't stand for it, I can tell you that. Over-zealous, over-steroided, over-whatever their problem is cops will not be tolerated here. Where skateboarding is definitely NOT a crime. 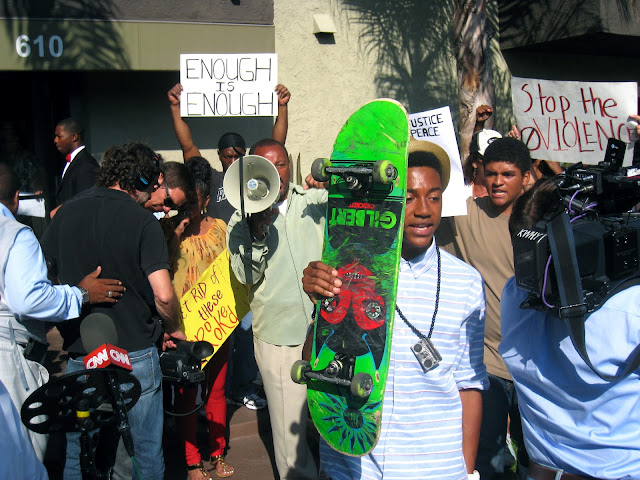 The press conference wrapped and one of the young skaters started up the Justice chant as Weekley Jr. was surrounded by press wanting more from him. 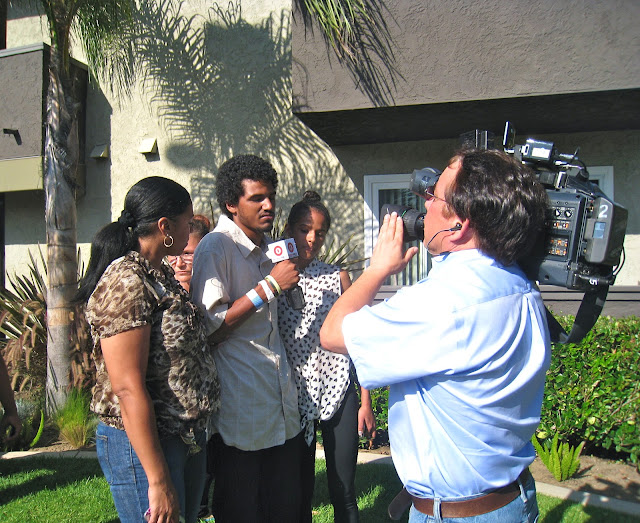 The chant evolved into "Peace From The Police!" as the group made their way down 6th Street, holding signs that read "Justice 4 Ron!" and the best one, "PEACE for Ron!" To quote everyone there, .... "YEAH!"