Day Two of Lollapalooza 2012 dawned hotter than the day before, if possible. We woke up feeling surprisingly awesome after a late night wound up at Giordano's Pizza. Coffee down the hatch (and some Advils to help with the headbanging to Black Sabbath side effects from the night before), I had the goal of getting to the Lolla site in time for one of my favorites, Delta Spirit. Who I'd never seen live before! That always excites me extra. 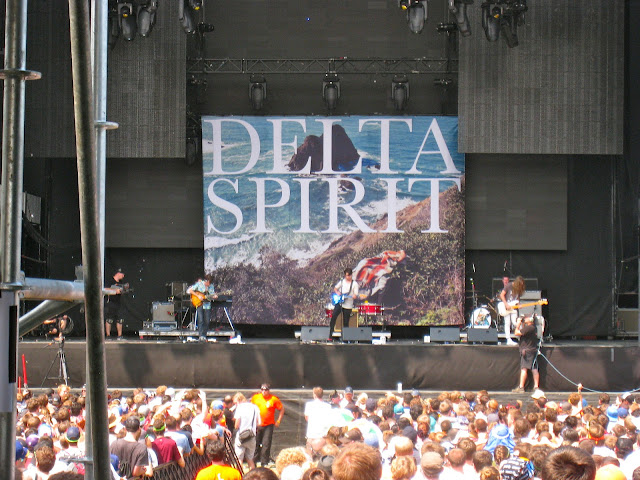 It was so hot you could see those heat wave things rising up off the pavement as we made our way inside. The only good news about being so sweltering hot and sweaty is that everyone else is in the same boat, which makes you all kind of bros, surviving together for the sake of the music.

As we strolled on into the festival grounds, Jeff The Brotherhood was playing immediately to our right at the Playstation stage. They stopped us in our tracks - and we were thirsty, on a mission. That's saying something. They rocked it hard, as my friend Steph said, "Nugent on his knees style". "There's a lot more of you here than we're used to, " remarked their singer. Jake Orrall. I think they'd better get used to it based on those jams. I'll go see them again as soon as possible. Whoa. Dug it. 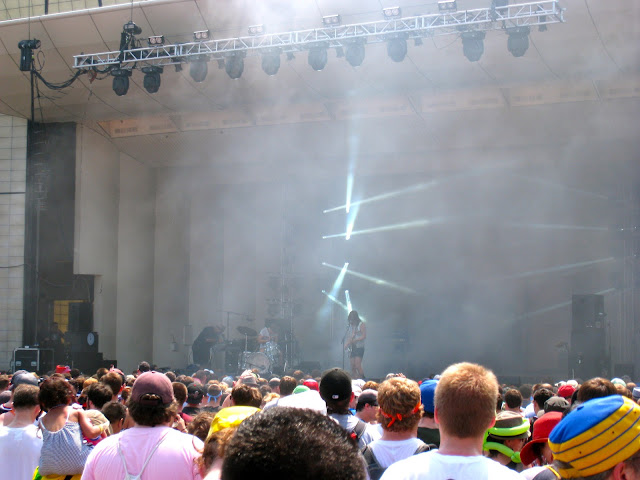 Still being thirsty, but now running late, a plan had to be made. After our dope time watching Sabbath the night before from the soundboard, and seeing the boiling hot crowd squashed in together now, the new plan was to view Delta Spirit from right there. Magic wristband, no problem. 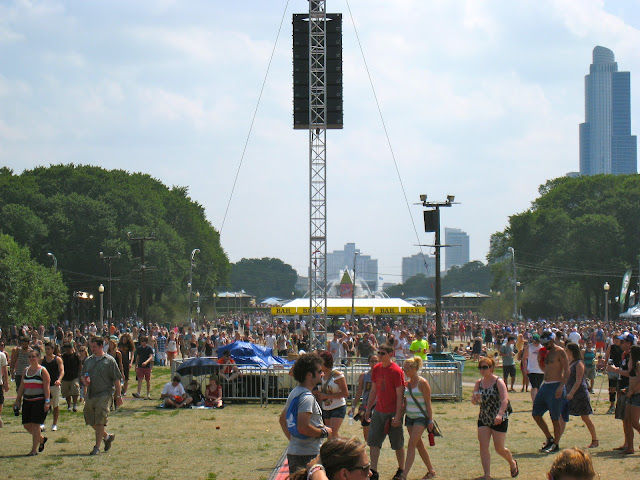 We downed that Water In A Box (smart idea), and watched the throngs heading towards us from the other end to get to the Bud Light stage in time. Pretty soon, Delta Spirit took the stage to happy shouts, and I felt that great rock thrill arise within. I first heard them on KCRW one morning, and immediately noted their name, went online, and ordered up everything they had out at that point. Their records were my constant friends in Summer 2010 - which was a really good one. And now here we were! 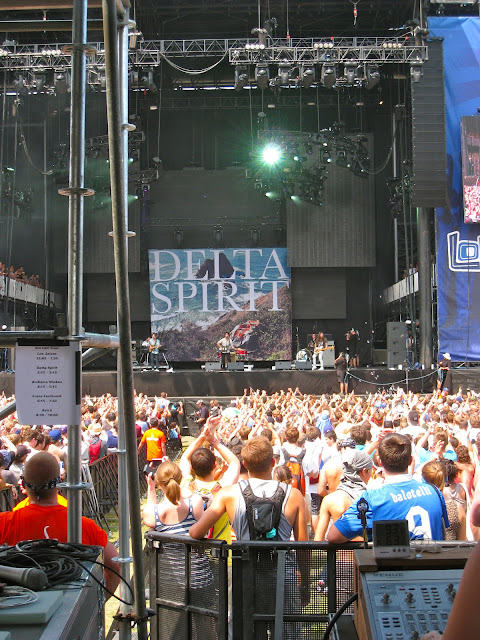 Instead of a lengthy gushing, which would be real easy for me to do, I'll instead share with you lines from Delta Spirit's singer, Matt Vasquez or the lyrics he sang, that all summed up the feeling and the day ... so far. {with little interjections to give you the vibes} 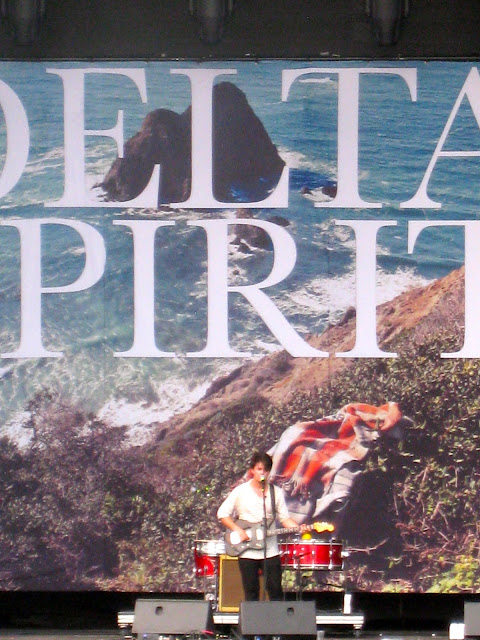 "C'mon, Let's do it here, come ON!"
{Beach balls bouncing and floating bubbles blown}
"Man, it's so cold out I need a parka and a hot chocolate!"
{Sweat rolling down faces and soaking through clothes}
"Just TEAR IT UP!"
{In the running for Theme of The Weekend}
"Happiness comes at the strangest times ..." 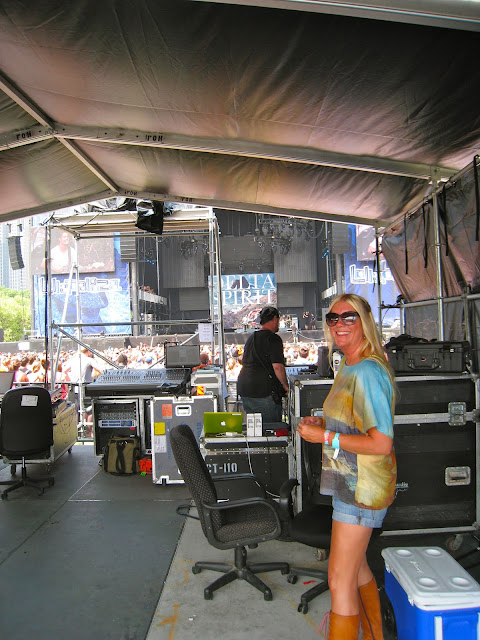 {Like exactly then, openly, tangibly, gratefully}"If you're feeling what I'm feeling, come on! All you soul searching people come on!"
{People ALL clapping along, and singing every word they knew, in spite of the raging heat}
"I'll make my own stand!" 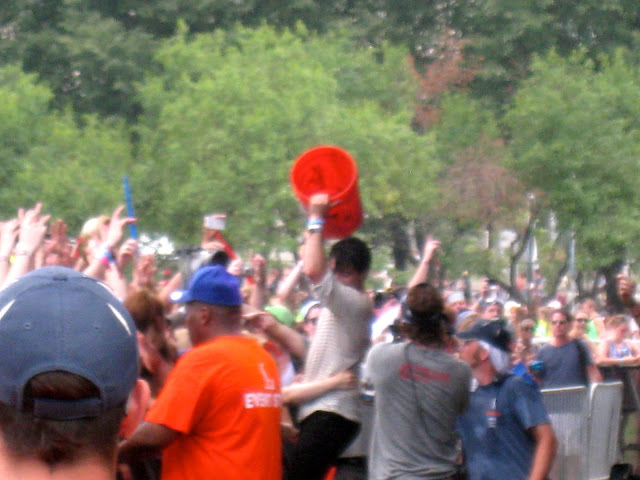 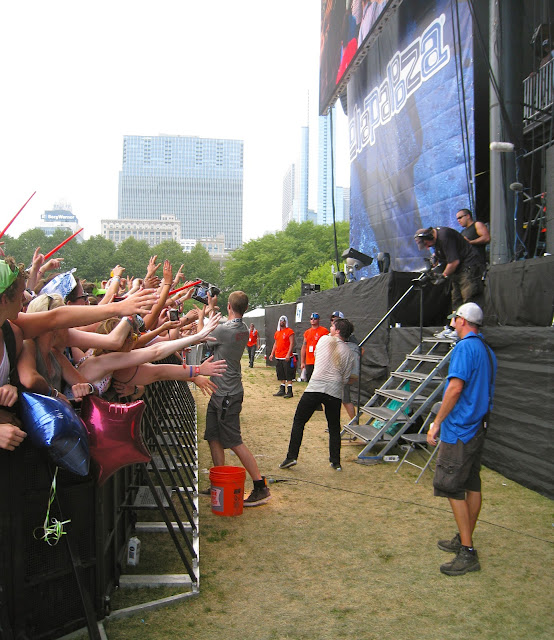 ... When as soon as Delta Spirit was ruling on its last song, the clouds rolled in, you felt the temperature drop, and the skies turned dark.  Delta Spirit had given their all, and the whole place was kind of spent as they left the stage. 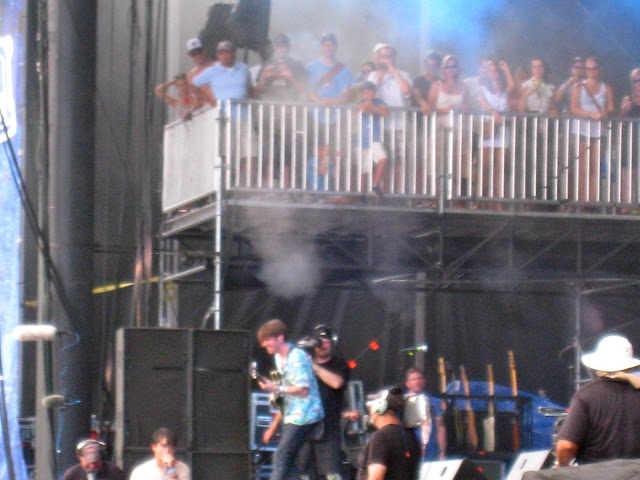 We got drinks, lolled about in the Artist area, and when it was time for a refill, we were denied "due to weather". ??? Then all of a sudden it got very dramatic. "Get in the trailer now and stay there!" kind of dramatic.  Everyone remained calm, understanding,  and 100,000 Lollapalooza goers were evacuated smoothly and safely in no time flat.With a little crowd surfing thrown in, just to keep it rock. As we were hoofing it back to the trailer area since the golf carts were suspended too (!), the Delta Spirit guys rode by on their lucky - and full or I woulda jumped on - golf cart, we all exchanged rock finger salutes. Bad to the bone. 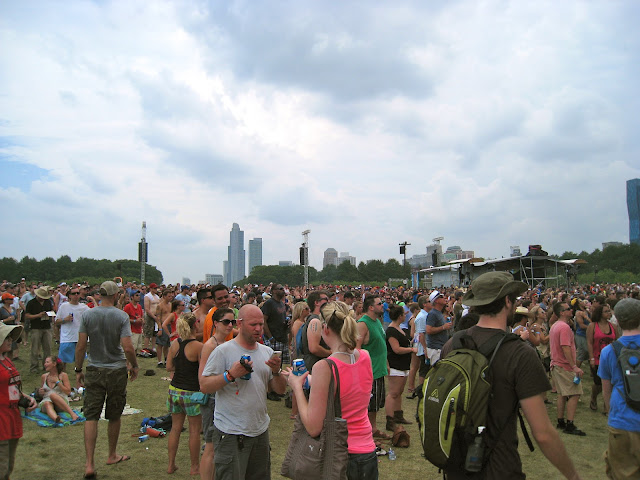 Children and women were evacuated first out of our area, and it was surreal to see the whole festival evacuation unfold from a distance. Better safe than sorry, I guess, but I hated to miss seeing Alabama Shakes for the first time right after that (among many others). We hitched a ride back to the hotel and that's where I'm filling you in from now. The brief shower has subsided, a mottled sunset is shaping up, and word is the gates have now reopened at the festival. 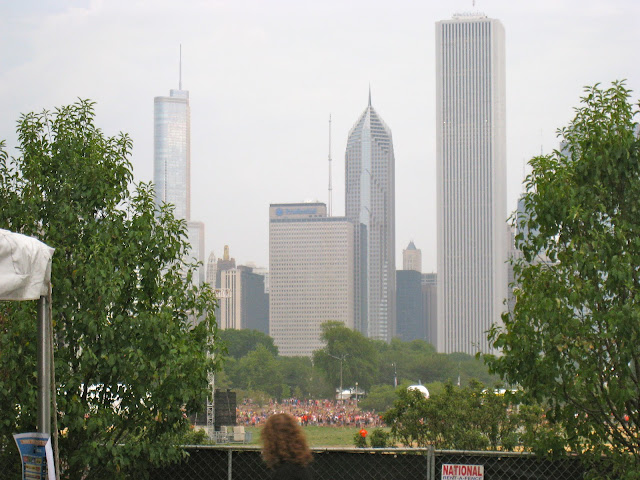 The silver lining in all those clouds was a little break from that crazy freaky heat, a regroup, and now we'll see what goes down next ...