After a long night of celebrating the success of epic time that was Lollapalooza 2012, it was a tired but happy bunch that met in the lobby the next morning to embark on the Jane's Addiction Summer Tour. There was really no time to recover as Jane's had a show that night in Cleveland, and the bus was leaving bright and kind of early. We talked about our shared Olympic fever (which we'd missed most of the watching, but were informed by Dave Navarro that there is a British swimmer named Liam Tancock. Excellent), sipped our coffees, and then boarded the buses to head east.

It's been a while since I've been on a road trip across the heartland, and it's so nice to see that there are still wide open spaces, lush green, funny billboards, and people that are content to live in little small towns and grow food on farms, and keep it all going. America. While most everyone else crashed, the Farrell kids and I looked for different license plates and all those good old school car games (you can't always be on the Ipod Touch, man!) you forgot about when you grew up. Good times. 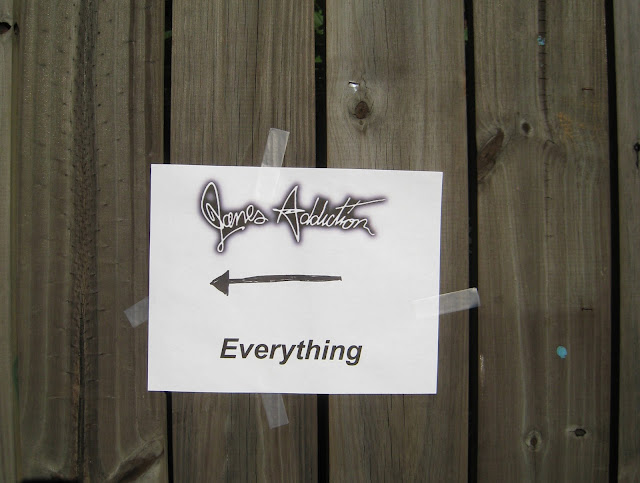 We pulled into Cleveland a bunch of hours later, and it's lovely there! Why does Cleveland get a bad rap? The venue for the show was a place called Jacob's Pavilion, and it's an outdoor amphitheater right next to the river (a river that a guy told me used to routinely catch on fire it was so filthy, and helped to bring about the Clean Water Act 40 years ago. It does not catch on fire now, so good work!), underneath a big rusty old bridge, very industrial looking coolness. 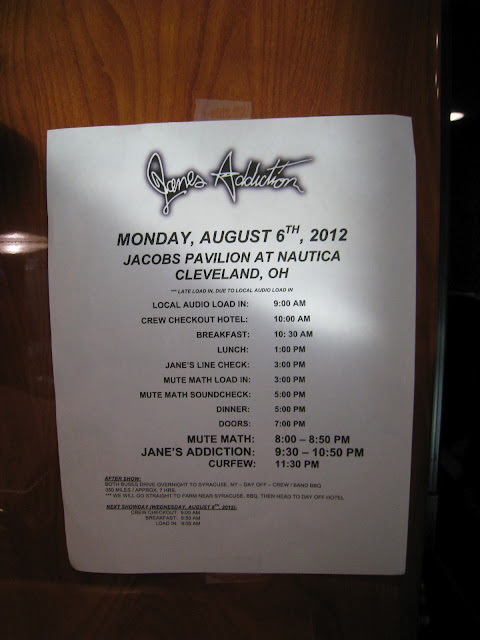 It was also very close to the stadium where the Cleveland Native Americans play (ok, Indians), and a member of the road crew told me he tries to hit up all the ball stadiums when he's on the road, and did I want to tag along while he went over to watch a few innings of the Indians vs. the Minnesota Twins! Of course I did. 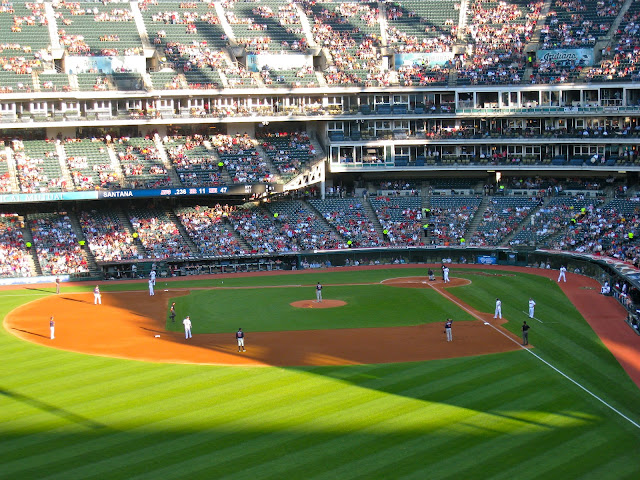 It was a gorgeous evening, made even more so by the fact that the Twins got 10 runs in the second inning alone! I was thrilled, the Cleveland fans were not. We got back to the show venue just in time to hear the opening Pink Floyd music building up the excitement. Backstage, the guys were gearing up to blow Ohio minds (which they went out and did, from beginning to end). 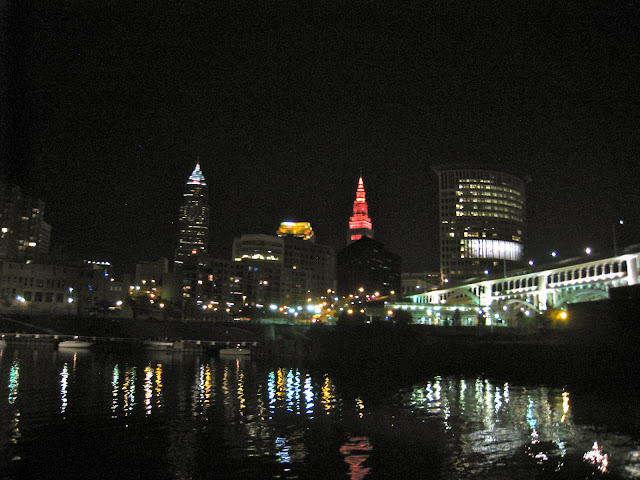 They tore right into "Underground" and "Mountain Song" and from the side of the stage, you could see the die-hards clutching their foreheads in disbelief that this was all happening live in front of them. Cleveland has been very hard-hit in this economy (I was told second only to Detroit), and though the house was not full due to that ugly fact, all the people that got in there really, really meant it. Cleveland has great fans, I can tell you from just looking at their faces. I almost got a little emotional, because I feel so lucky that I get to see all this good music, and a lot of people don't. I never take it for granted, but when you see the pure happiness in people that are having the thrill of a lifetime, you have to remind yourself again how very great you have it. 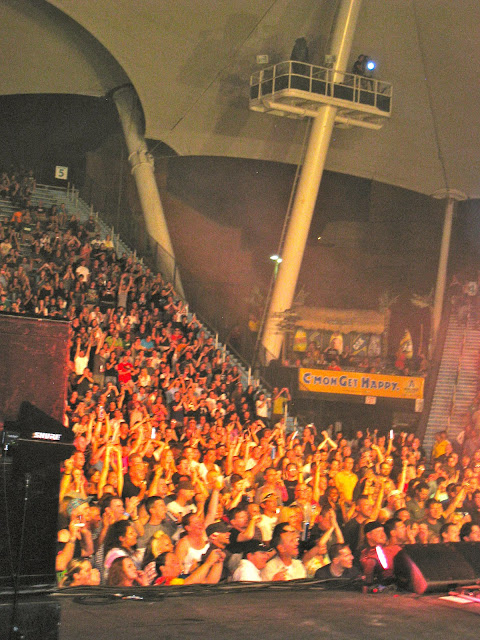 Again, people knew every word and them all back to Perry, sometimes almost drowning him out. Perry told me that you play new songs for yourself creatively, the hits for everyone because everyone knows them, and then you go to deeper tracks for the true, connoisseur fans. Rewards! "Been Caught Stealing" and "Ain't No Right" I'd put into the hit bunch, and the crowd would agree with me, as into it as they were. 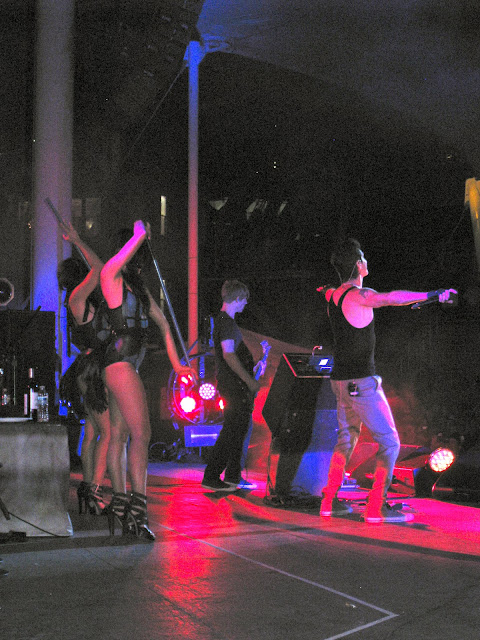 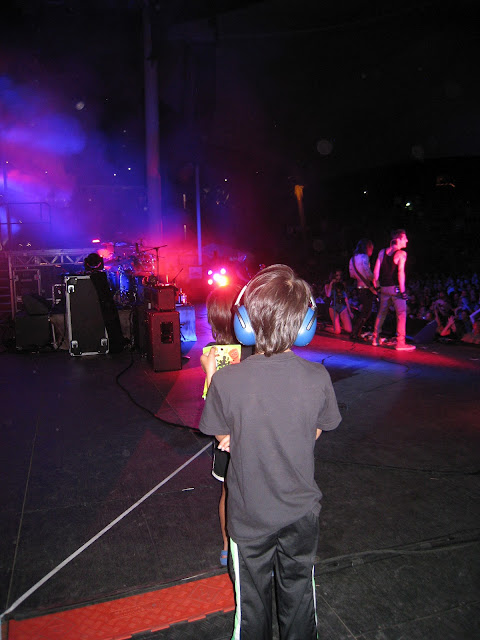 Echoing my thoughts exactly, Perry shouted, "I love to see the faces of all the real fans!" Who all screamed their faces off ("2, 3, 4!!!") when Stephen Perkins joined Chris Chaney, Dave and Perry at the front of the stage to bang the steel drums for an acoustic "Jane Says". They honestly knew and sang loudly every single word, and it was awesome. 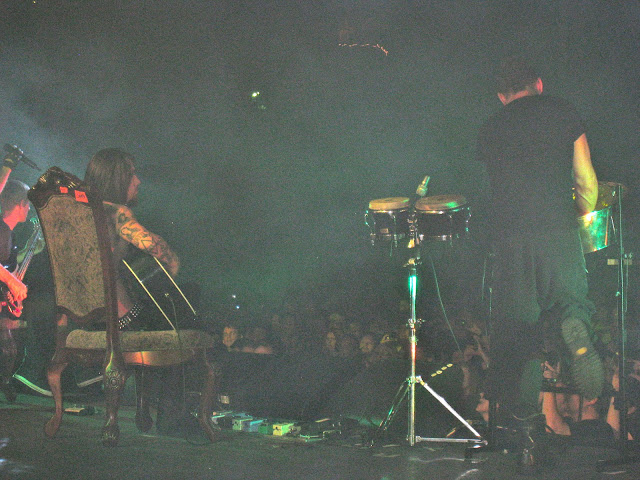 "Then She Did" was for the folks who go way back, and Perry was clearly into the groove of this big, epic jam. I was sitting on the side of the stage by Dave's guitar cases, and had the greatest view possible, but almost wanted to close my eyes and just soak up the sheer artistry of this flawless tune. 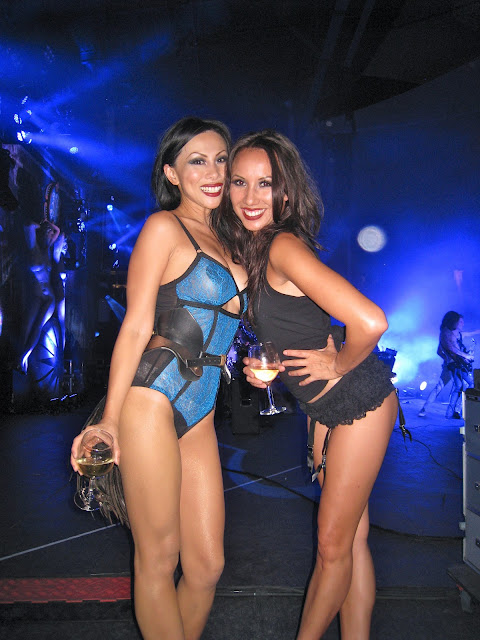 I did for a second, and when I reopened them, there was the great lady and friend, Etty, standing there with Stephanie, all hot in their costumes, and holding out a glass of champagne for me to enjoy. Just when you think moments can't get better .... you find that they can. 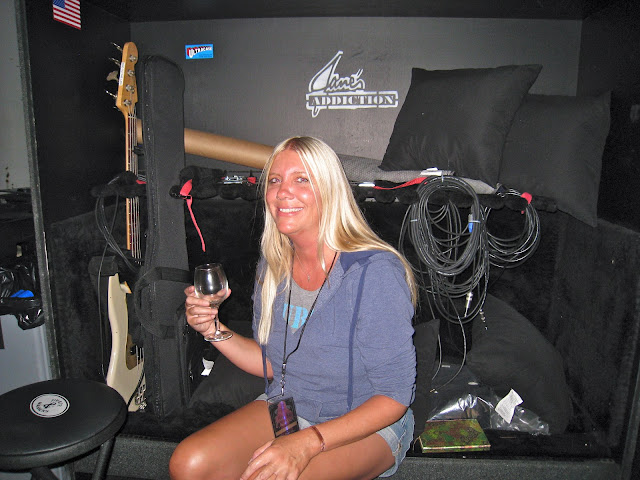 "Splash A Little Water On It" is one of my new favorites, and I honestly think of it every time I shower now.... Splash a little water on it/See what you're working with ... for each new day. 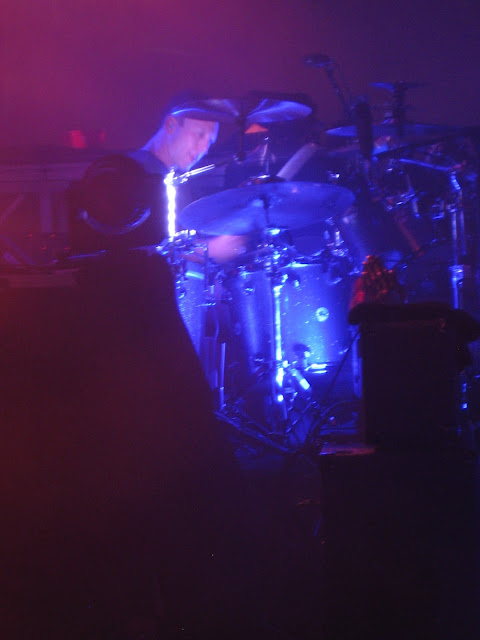 It's a big rock anthem about big rock nights. And I love it. As I love "Ocean Size", which is always ocean big. Massive waves roll by on the screens during this last one of the main set, and as the audience yelled its appreciation, Steph turned to me and said, "Cleveland's kinda great". Total agreement. 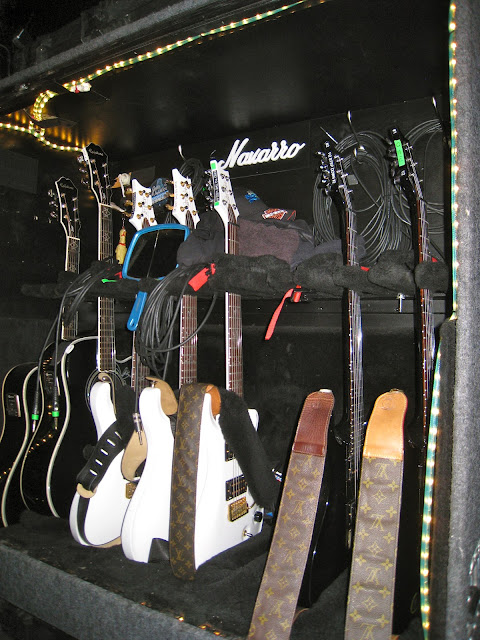 Perry and Dave came over and sat next to me while the crowd screamed for more, and it was so fun to sit there and listen to them chat casually while the fans absolutely lost their shit on the other side. Perry and I smiled at each other before they got up to reward the place with more, because you could just feel how happy everyone was out there about this show.  They gave them "Stop" which everyone there sang louder than Perry, without mics. 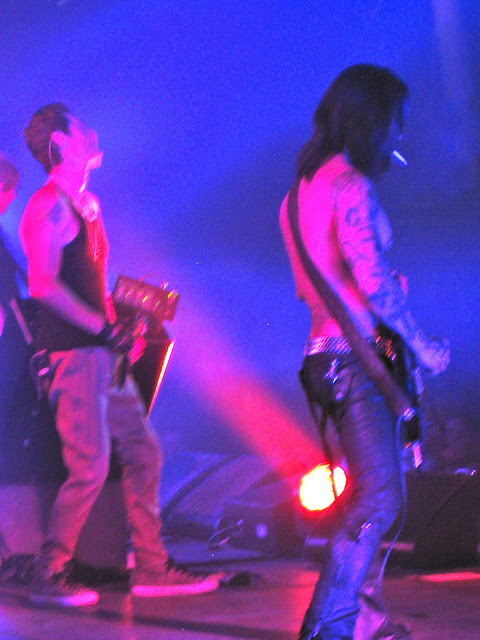 Dave blazed through this one like he was on fire, and almost hit me with his guitar when he tossed it off stage at its end. Rocker. 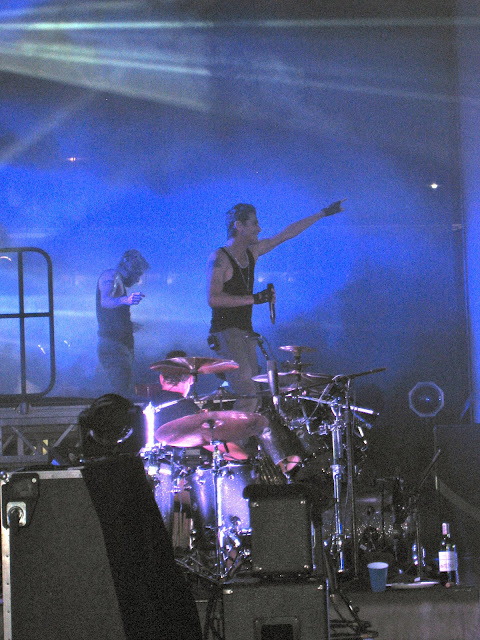 Then AGAIN I got to hear my very favorite "Summertime Rolls". It's just such a perfect summer song, and Cleveland thought so too. When it got to the part where Perry sings We are the ones ... it felt like everyone there shared that collective knowledge. Like we ARE the ones. Who get it, who appreciate life, and good music and great times together with strangers feeling the same things. The tricky part is to keep that feeling going, or at least be able to return to it when you need it. I hope Cleveland can do that, because they do need it and they do have IT. 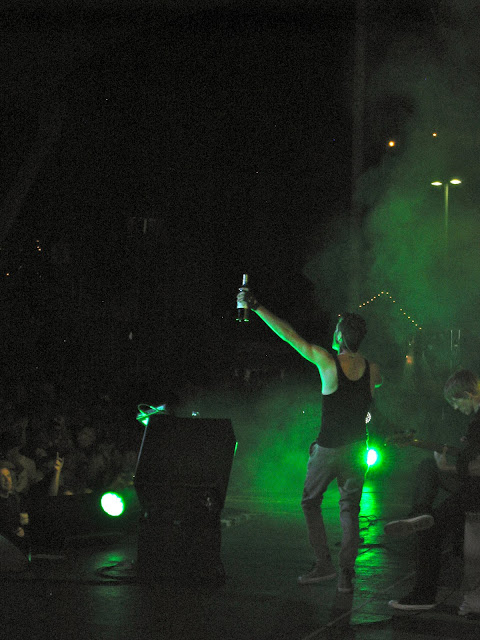 Then it was over and all you heard was happy rehashing as the crowd streamed out to carry on their party. We ate a post-show meal, rehashed it ourselves, and then loaded on to the bus to prepare for bed in our bunks and travel east while we slept ... to see how things are in Syracuse, New York.