Medicine, with a Spoonful of Sugar.

Whoa. Memorial Weekend already?! Time is flying ... and I'm concerned that we're not paying attention to that, and wasting a whole lot of time being dissatisfied, and bickering - in the media and among ourselves - over things that divide us, while preventing anything from going forward in a positive fashion. Again.

I cannot bear some of the criticism I'm hearing lately about our President - who thank GOODNESS is our President these days, over anyone else even put up for the post in recent memory - and hearing comparisons to Katrina. That is so ridiculous I could (and do) cry. People were stranded on rooftops, and bodies lay bloating in the streets of a major American city during Katrina - and Bush said "Brownie's doing a heckuva job", and then went back on vacation in Texas to clear brush. Obama is handling MULTI-crises at all times, and doing so respectfully, and nobly. Accepting responsibility for an Oil disaster, when it is all due to de-regulation in the record-profiting Oil Industry, and BP who wouldn't cough up for a part that would have prevented this whole catastrophy. We have never had to deal with a nightmare of this scale before, and I truly believe our President is doing the best he can with the resources he's able, amid constant street-fighting from oil company execs and lobbyists, and a bunch of jackasses in Congress and the Media (and a swath of the general public who just don't get it, and probably never will).

It might also be time to look into your driveway, or pause during your rush-hour traffic and ask yourselves how much blame YOU should accept with respect to oil, before you go dissing the excellent President we finally have. I've had it with all that. We are a great country when we're working together, not when we look to the entire world like an elementary school playground, tattling and pointing fingers, and missing the big picture entirely. We'd better work together now, before as my main man, Kris Kristofferson, sings, "It's over, nobody wins." 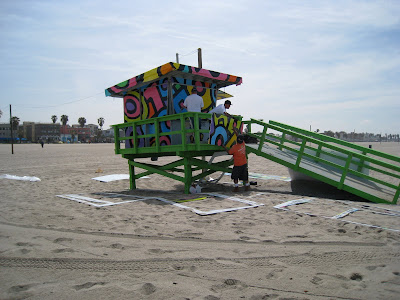 Now that that biz is somewhat off my chest, I again invite and implore you to enjoy and appreciate your beaches (or lakes, rivers, ponds, creeks, mud puddles ... any natural body of water you know and love) now, while you still can - and actively participate in ways of preserving those stunning and sacred resources. The Portraits of Hope Lifeguard Tower panels made their way onto Venice beaches this morning, and reminded me that there IS still Hope for us - but only if we can start appreciating in our hearts and minds both our Earth - and each other. Whatever our differences might be. 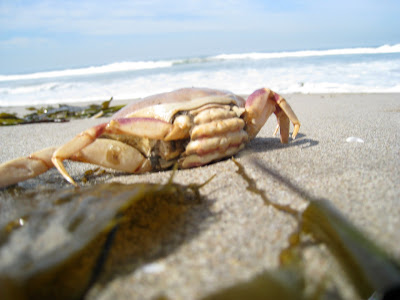 Have a beautiful and safe Memorial Weekend, Everybody! Have hope, get involved, and get WET!
Posted by CJ Gronner at 2:12 PM