Last Friday night was the Grunion Run ... a phenomenon that can only be seen in Southern California and Baja. The Venice Oceanarium hosts the evening, with oceanographic experts there to inform the gathered voyeurs (as the Grunion Run is really the grunion fish washing up on the sand to lay - and have fertilized - their eggs). This is the true Sex On The Beach - and fittingly, Danny's Deli was offering those exact shots for $4 on Friday night, getting in the spirit. Funny. 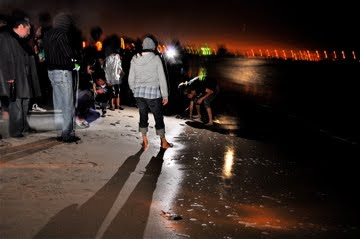 I've been in years where I've not seen one silvery grunion. I've been years where it was as if the beach itself were writhing about, as thousands and thousands of the fish washed up, lit by neon blue phosphorescence (that was for sure the best year). I went on Friday night and believe I saw a grand total of about 5 little Grunion ... but I'm told there were scads more later on. I threw in the towel about 1:30 a.m., as I had a big day coming up the next day, and have seen the aforementioned bajillions of them before. 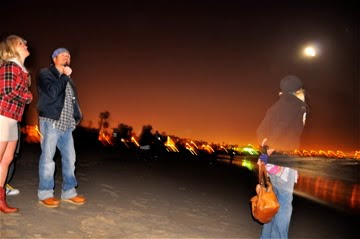 Never mind how many you really wind up seeing, it's just kind of great to walk out across the sand and see flashlights flitting about, and entire families - Gramps and toddlers alike - out there past midnight, for the sole purpose of seeing a natural amazement. People talking and learning from each other, ooh-ing and aah-ing over one single fish when that's all there was. Cracking the usual orgy jokes. Sharing a snap off the flask to warm up (I heard. I'd never ever have an open container myself on the beach!). Getting to know stranger neighbors, there to partake in an annual community event that is so crazy, some even think it's just a myth, and give up too early every year. 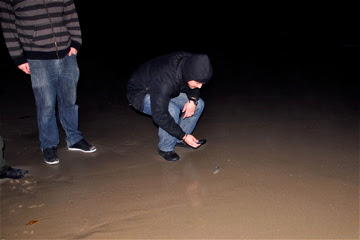 There was a guy fire dancing down there this time, and it added a whole element of tribal mystery to the proceedings, which we dug. The Moon was two days past full, so the beach was all silvery blue, offering the appropriately hued welcome mat to the libidinous little sardine-like fish. All of it was so pretty, the dawdling grunion soon became secondary to the cheerful fellowship that also naturally occurs when you're all interested in something together. 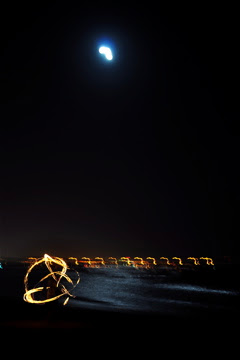 Much like a meteor shower or an eclipse, your patience is necessary to witness the Grunion Run, but your mind will always be blown when you're there at the right time. It's a good reminder that nature persists, however much we interfere with it. We are so small, and our tenure so fleeting on this planet, in the whole scope of things. I like to check in with that feeling as often as possible, so that I can continue to be dazzled by and appreciative of my time slot here.

There are a couple of chances to witness this mass coupling each Spring/Summer. And once you do, you really won't ever forget it. Go Grunion!!