We've been talking about people caring here in in Venice, and yesterday I heard the most beautiful example of this. I was riding down the Boardwalk when I ran into Edizen Stowell from Venice Paparazzi. After the greetings and hugs among the gang, we started chatting and wound up getting into how we both strongly believe that there is a sense of community here that is palpable, and actually informs how we live our daily lives. It was then that she said, "Listen to this ..."

Everyone has seen Edizen cruising around on her longboard with her skateboarding Bulldog, Butterface, alongside her. They were true buddies, like on a human scale. Well, poor Butterface had cancer, and last weekend her husband, Alex, called her while she was up in Canada celebrating her Mom's birthday to tell her that things did not look good for Butterface. Edizen got on the next flight out, and while waiting out a layover in Phoenix, had a nap and dreamed of Butter's face, and saw his eyes close. She called her husband and he told her they were waiting for her, but in reality Butterface had died two minutes earlier ... right when she dreamed of his eyes closing.

Edizen finally got home, where Alex broke the news to her. She was upset and crying, and at about 1:00 a.m. Alex went outside and asked for Edizen to join him. This is what she saw: 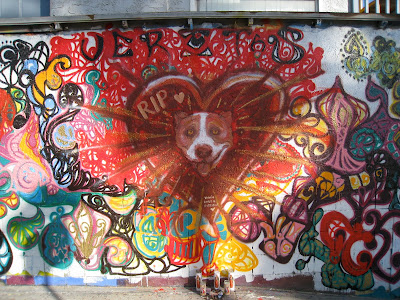 An anonymous neighbor had gone out at night and created this wonderfully touching mural of Butterface right on the side of their building! In close up, you can see that it says "Venice loved U Butterface". While Edizen was telling me this, both our eyes were welling up that the people of our community feel and care about each other to lengths that you're not even aware of sometimes, until you really need it. 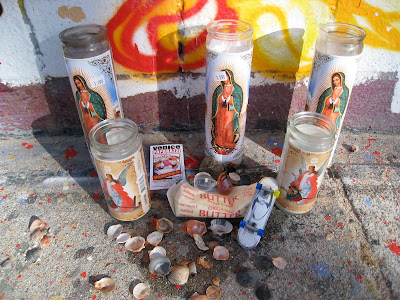 Through the next day and on until right now, people have come by and put out candles, notes, little toy skateboards, and even a stick of butter!! Man.

This gem of a story gives Dogtown a whole new meaning ... and I couldn't be more proud of the compassion and sweetness that continues to endure in our home by the beach.

(and to the Anonymous painter ... THANK YOU for your caring heart.)
Posted by CJ Gronner at 10:19 AM