This past weekend was the big annual Venice Art Walk, (to benefit the Venice Family Clinic) where we remember that Art is what made Venice so special to us in the first place. As the popular T-shirt goes, "Venice: Where Art Meets Crime". Crime was somewhat in effect, with a rumored mugging in broad daylight near the French Market, but it otherwise may have gone unnoticed, as super dang windy as it was. WHOOOOOOSH!

But that didn't stop hordes of art lovers from coming out to take it all in. 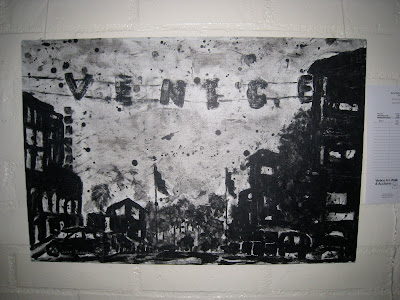 I always like to start at Westminster School, where the silent auction takes place. It's cool because you can see around 400 pieces in one spot, see what you like, and then head out to the studios of many of the auction's featured artists to see where they create their works. I always thought the school part was free to walk through, but I guess it's not. They might want to open just that School part up (for people to look at, and if they want to bid, then pay?), to make some of it accessible to all Venice residents, not just ones who can cough up the steep admittance fee. It is the biggest fundraiser for the essential Venice Family Clinic, so I get it, but if our community is about art, art can also be about the community sometimes. You never know how your next big collector will start out. The school yard is open to all, and has food tents, live music, and mingling about, but if it's art you're into, you have to go inside. 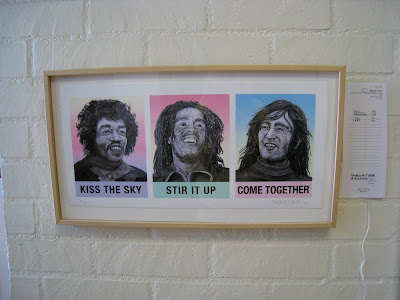 It can be a bit hard to tell what the pieces will look like in a home vs. hanging on a rather blah elementary school wall, but you do your best. 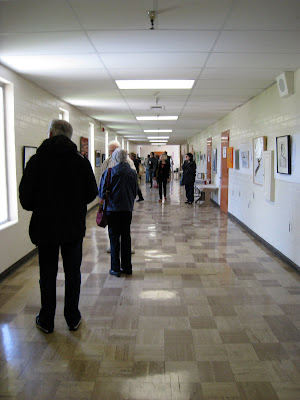 Some of the works had no bids at all next to them (for good reason) and some of them were clearly going to require hand to hand combat to obtain. Beach and Venice-centric pieces are very popular, as are pop culture ones, like Shepard Fairey's skateboarder and Jaws surf spot ones. 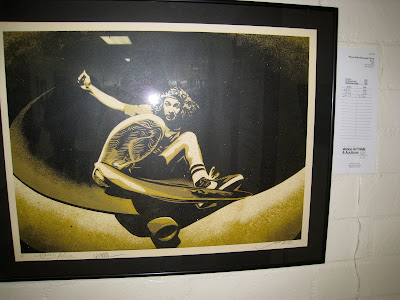 That's a cool thing about the Silent Auction part ... one piece will be by your quiet neighbor that you didn't even know was an artist, and the next will be by Ed Ruscha. No zoning. 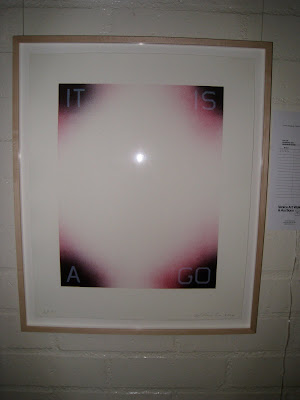 It's a big job to amass it all and get it hung and sorted, and the whole thing is by and for the Venice Family Clinic, probably the most important cause we can give to in this town, especially in times like these when health insurance is a luxury many can't afford. 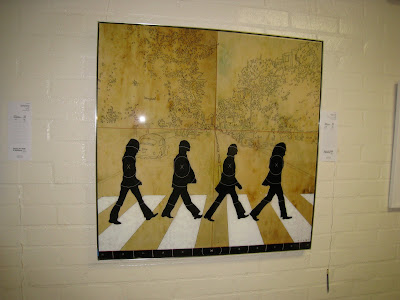 Once you do the laps of up and downstairs at the school, it's off to the artist studios you've starred in your guide. It's very cool to be invited into these hallowed spaces where people create their expressions in so many different mediums and vibes. There's the real messy ones, with paint everywhere. The real anal pristine ones where you wonder how anything ever gets done. There's the ones that artists live and work in, and the ones that are strictly showrooms. It's kind of telling as to the art and the artist themselves, if you think about it (and I do). 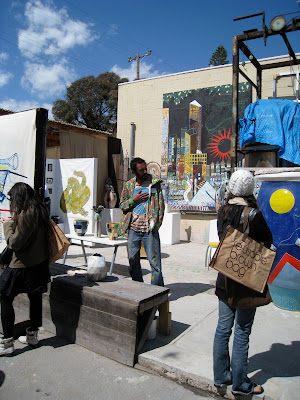 Highlights for me were the studio (and stories) of rock photographer Guy Webster - Wow. The vivid photography of Gjelina's own Robert Schwan. The colorful maze of the "Milwood Mansions" (Scott Mayers residence). 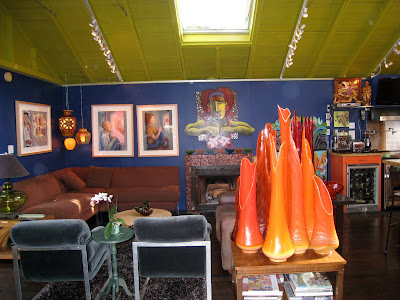 The Venice beachiness of Jay Mark Johnson's trippy "Spacetime" photography. The live painted naked lady drawing quite a crowd in front of the window of the 99 High Art Collective. The very realistic and cool tree sculpture by Pontus Willfors. All of it is interesting, some of it is just more to my taste ... as it goes with any kind of art. 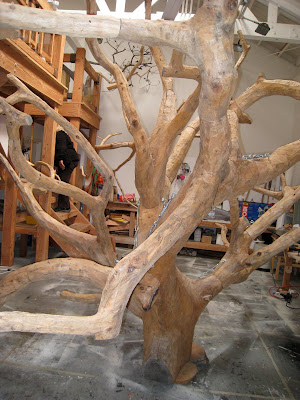 I really missed "The Eclectic Collector" this year, the craziest house in the world, that I brag about the rest of the year. Where were you, E.C.?! Instead, a really great treat this year was the Neighborhood Numbnuts exhibition put on by local raconteur Alan Shaffer, who has been part of the legendary Venice gang of Bell, Conal, Dill, Edge, and Moses since time began, pretty much. His fantastic photos documenting his years of running around with this bunch were all over the walls of Capri restaurant, along with a piece by each guy photographed. Alan was there to tell stories about each, and there are so many that we're just going to do his own story here very soon. 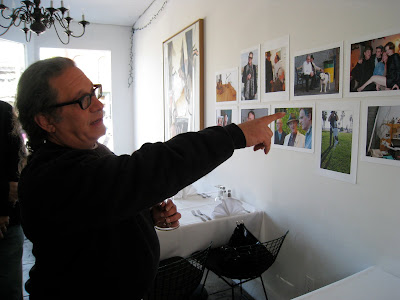 Of all the art I saw, the ones I most want to organize a heist around are the gorgeous wood stain paintings of music icons by local artist, Justin Herber, on display at The Other Room. Bob Dylan is the one I most covet (Happy Birthday, Bob! 69!), but each one is just jaw- droppingly great. Jimi. Billie. Louis. Willie. Mick. Each of them are all the way up my alley, and you should check them out immediately. Love. 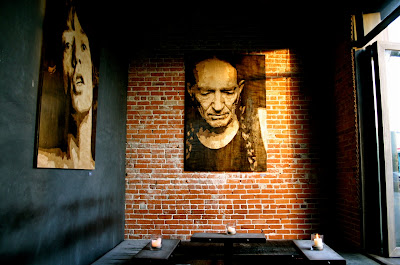 You could really use a solid week to get around and not just see it all, but hear about it all, as every piece of art has a story, and I'm all about the story. It's a great day to be out and about and bump into your local characters and neighbors, so many that you end up chatting and not getting to see it all before it shuts down for the year. And that's all part of the fun. I look forward to this weekend each year, where Venice once again becomes all about the Art - and celebrates that in its every nook and cranny.
Posted by CJ Gronner at 1:58 PM