May Gray. I'm already completely sick of it and we're not even into June Gloom yet here at the beach. It makes it extra hard to get up early in the morning to have my walk along the shore, but we do it anyway. It really does affect my mood, this thick mass of gray, and so it was that as we walked along this morning, my mind wandered to darker things. Things like why are there so many big clumps of tar along the beach this morning? The BP horror show in the Gulf Of Mexico has been in my thoughts a lot lately, obviously, but there's no way tar clumps could be HERE already, is there? It HAS been spewing for almost a month ... I don't know. I do know that I have to scrub my feet for a half hour when I get home, and that's with being careful where I step. I walk this stretch of beach every morning, and it's way more tar than normal. Even if it's completely unrelated, there shouldn't be tar washing up, period. And as for the Gulf, people need to go to Jail. For life. No question. And don't even get me going on the huge profits BP has made lately. What an absolute dirty joke.

My friend Jenny and I get pretty riled up in our discussions about such things, and it wasn't until we were walking past the huge tractors digging up sand near the sewage outlet (Again, I'll refrain from THAT digression of pollution in our waters - just for now), that we saw and remembered that this morning was the unveiling of the first three painted Lifeguard Towers for the fantastic Portraits of Hope project.

By the time the Summer is in full swing, all the Lifeguard Towers from Zuma Beach in the North, to Palos Verdes in the South, will be completely decked out in brightly colored patterns. All of them were painted by kids and volunteers around Los Angeles on boards, and the panels will be put up on the Towers by Construction teams. 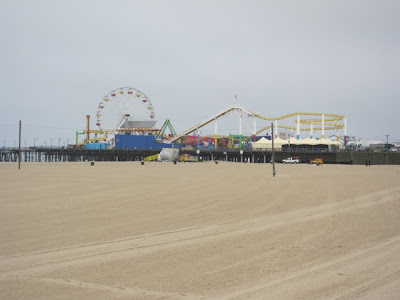 As we got closer to the last Tower before the Santa Monica Pier (the one we usually take a water break and stretch on), I had to crack up a bit, because something felt different. I realized that the beach was the most immaculate I'd ever seen it in my life - fully raked and groomed, not ONE piece of garbage, and the homeless guy that has been crashed out sleeping near our Tower EVERY morning for over a year, was nowhere to be seen (Paid off to move? How does that work?). Then I saw the reporters and cameras assembling on folding chairs by our Tower, as well as guys in suits and the Venice Marching Band, and connected the dots that they would want to have a pristine beach for all the photo ops that were about to happen. Kinda funny, but nice to see the beach like that, real or fake. 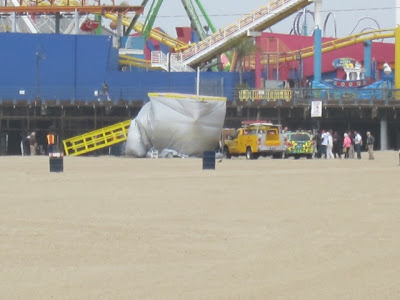 The first three Towers were shrouded in gray tarps, matching the mood of the weather. The line-up of city officials began, with the speechifying that usually accompanies such events. We stood there in our tarry feet for quite a few speeches, and it went on and on. 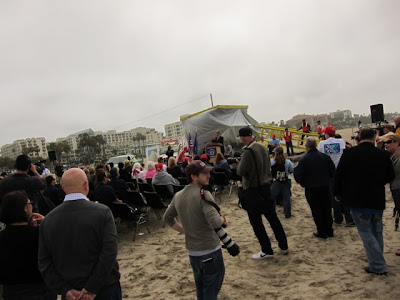 L.A. County Supervisor Zev Yaroslavsky talked about how L.A. beaches are some of the most recognizable in the world, and this Lifeguard Tower project is going to brighten it all up, from land, sea and sky. All Summer long, until October. After that, many of the wood panels will be sent to Haiti to provide both shelter and color to a place that sorely needs it. Wonderful! Supervisor Yaroslavsky said it was actually kind of nice that it was so gray out, as the contrasting brightness of the Towers would be all the more noticeable. True, but when our beloved Sunshine is back, it's really going to be something. 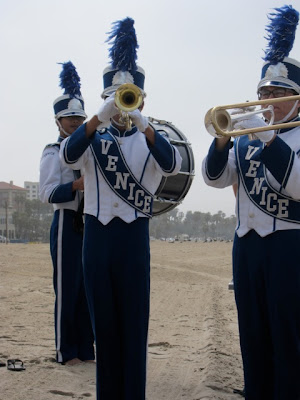 The Venice Marching Band played (and it warms my heart in this increasingly electronic age that there are still kids that sign up to be in Marching bands), and little kids ran about learning about Ocean stuff (and hopefully avoiding tar). 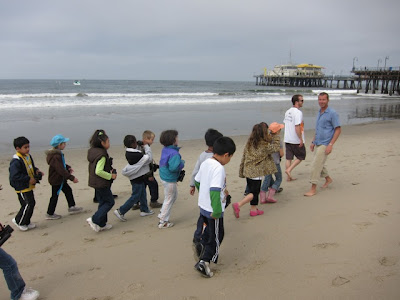 Then the brothers behind the Project of Hope (Please do go to their website - www.PortraitsofHope.org - to learn more about this great organization that stresses the importance of teaching ART to kids, while making them feel that they're a part of something BIG, which this endeavor surely is), Ed and Bernie Massey, were up next to speak, but it was all taking so long that we really had to split and get our days started. We kept turning around as we walked to see if they had pulled off the tarps yet, and all the way back to Venice, they STILL hadn't. (I get it that people work hard on things and want to say their bits, but, Man. Short and sweet, People).

My morning felt a little unfinished not having seen the dramatic unveiling, so I pedaled back down there this afternoon. Sure enough, through the gray mist, the colors popped out at me, even from quite a distance. I love it. With all the gloom and doom and fear shoved at us on the evening news every single night - environmentally, politically, financially, and even in our own community with more bike thefts, OPD fights, redtape hassles and other lameness like that, it can be real easy to fall into that line of thinking. Especially when the marine layer socks us in on top of it, it can be like S.A.D. disorder around here. 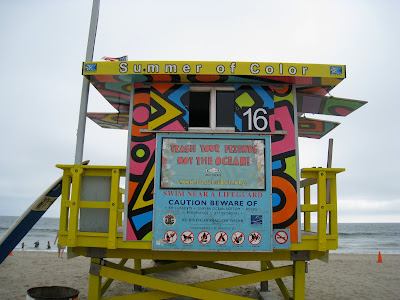 So when an entire 30 mile stretch of beach fights back against that to proclaim - NO! This is going to be a Summer of Color! (that's actually the theme of the Lifeguard Tower project, painted across the top of all of them) - it makes you embrace the color inside yourself, and fight back in your own mind against all the heavy gray that looms around you. 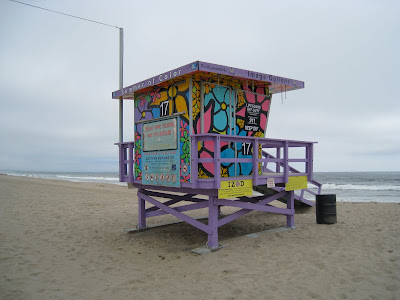 Color. Hope. Community. Fun. YES! And all just in time for Summer. A Colorful Summer. Embrace it.

*Photos by Jennifer Everhart & Me.
Posted by CJ Gronner at 1:31 PM