I've been walking into the welcoming arms of the Fruit Gallery right off the Boardwalk in Venice for ages, and I just finally (because they're pretty much always busy serving up their healthy doses of natural goodness) had a chance to sit down and chat with the darling couple who own it, Nina and James Merced. When you're at the beach and need something to eat quick that's actually healthy, have a cold and specifically need a ginger shot, or that pesky hangover that won't go away until you crawl your way down there ... the Fruit Gallery fulfills that order for locals and tourists alike. 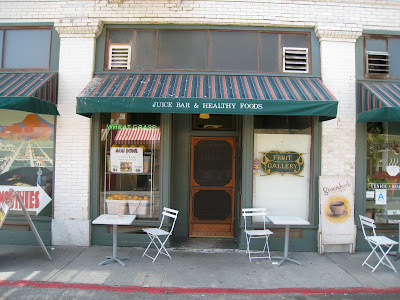 Nina grew up in and around L.A. and James is a Chicago guy. Nina graduated at the top of her class in high school, and wanted to get out of L.A,. as she was faced with friends turning into gangsters and placing her in danger. She also had to sort out how to pay for College, and was stressing out about that. Right at that time, she was wooed by a recruiting agent for the U.S. Navy who told her they would pay for her further education, and she'd get to travel the world. That sounded pretty good to her. Luckily, this was in the time gap between the Gulf War and the Iraq War, so she went to places like North Carolina and San Diego vs. the Middle East. While in San Diego, she met a dashing Marine named James ("I didn't know the different service branches really mingled?" - Me. "They mingle in Clubs!" - Nina), who she began to date right away. Neither one knew the other was in the Military for a while, as they were both kind of sick of dating within the ranks. Nina had a son (Alex) from a previous relationship, and James had a daughter (Diamond), and soon they became a unit of their own.

Then James' mother back in Chicago got ill, and he had to go back there to take care of her. Meanwhile, Nina was in a terrible accident where she and her baby boy were hit by a car and thrown through the air together, injuring both pretty badly. There really was no choice but to head to Chicago all together, where soon Nina and James had a baby son together, Jonathan. That stint in Illinois would last about a year and a half, before they were going back to Cali'. 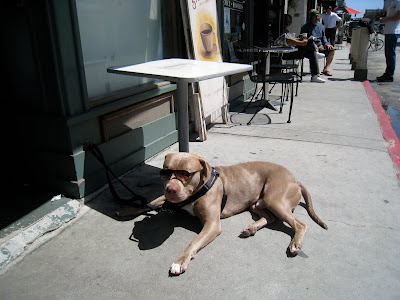 Once re-settled in Riverside, Nina climbed up the corporate ladder at a sewing machine company (she's also a seamstress), and James was a real estate guy. Getting caught up in the work routine, and having stress from health problems with the baby, Nina's own health began to suffer. She had stomach problems and kidney stuff, and went to a bunch of doctors regarding both their son and herself, and was advised to improve her diet, cut out the soda, and take better care of herself.

She did as told, and her health (and the baby's) vastly improved. She soon fell back into old habits, as we do, and felt sick again. Once she connected the actual improvements and declines to what she was putting into her body, Nina's interest in natural foods and remedies grew along with her strength. She and James began thinking about doing for their work what they were doing for their bodies, and started looking into starting a natural juice/healthy food business.

It just so happened that the woman who owned the Fruit Gallery right off the Boardwalk on Venice Beach was selling her store. Nina and James came down one weekend and sat on the grass, watching the customers flow in and out the Fruit Gallery's door, and knew they could move to Venice and make a go of it. 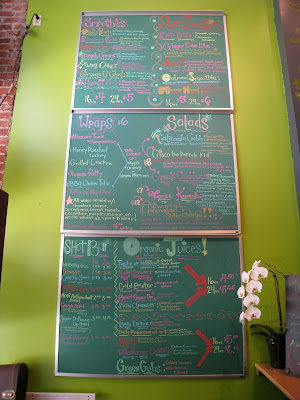 And a GO they have. Business never skipped a beat, and has only improved. They are a vital part of the Venice community, and have the regulars and friends to prove it. The juices squeezed out of fruits and vegetables right in front of your face; the shots for whatever ails you (the cough one is a no-fail, and the ginger will snap you out of most anything); the delectable smoothies with fun names like The Hangover, Hawai'i 5-0, and Venice Peach; the filling and garden fresh wraps or perfect acai bowls, the fresh coconuts, whacked apart when you're done sipping so you can eat the meat ... all of it is a pure shot in the arm of health, with none of the pain. 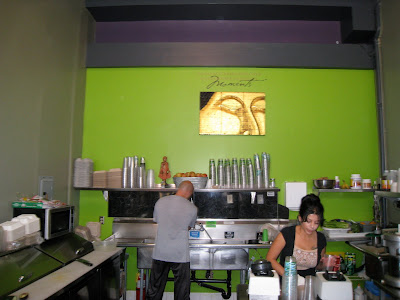 In that vein, Nina and James started "Feed The Beach" in 2007, where they invited the local homeless they'd come to know well to join them for a free Thanksgiving feast, served right there in the Westminster Square. Once they posed the idea to the surrounding merchants/friends, they actually had more offers of help and food than they even thought they could use! As Nina said, "You can't turn down that spirit, you can't turn that away. I had the idea, but so had 10 other people been thinking it ... you just have to start talking about it, and then do it." It turned out that they COULD use all the help and donated food, as from the first of the now annual events, the line of hungry homeless extended around the corner down the Boardwalk.

Even then, Nina said, "Everything we needed, came." That is the spirit of community that draws we who live and remain here together. That is the idea behind a place that is like no other, and why people come from all over to experience that electricity in the avenues. Underneath all the hoopla, people CARE here. That is personified by the Merced family, ask anyone.

There was a very cool attempt at having a THIRD Friday thing on Westminster to punch up business at the Boardwalk and have another fun thing for local shops, neighbors and visitors to mingle among each other and perhaps dance a little, but the Police were called out by a cranky neighbor for the big disturbance of music and fun, and that was that. Ahh, Venice ... it can't ever be too easy and great, but we keep trying. 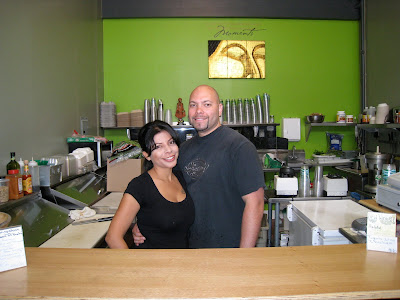 Nina, James and I bonded over the fact that each of us, since we were little, little kids, always knew we wanted to live here. James and I from watching Sunkist Good Vibrations commercials in the Mid-West, and Nina from being brought here as a little girl. So here we all are. And we've all found each other. And we all love it, and appreciate every day of our Venice lives. Lives that are healthier, cheerier, and more neighborly because of places like Fruit Gallery, and people like the Merceds, again, that CARE.

Visit the Fruit Gallery and feel great at: