Yes, I come from an Immigrant family. My grandparents came to the United States from Norway. Today they celebrate their Constitution Day in Norway, and fly the red, white, and blue of their country in celebration, kind of like their Fourth of July. I'm flying my little flag here in Venice today too, as I grew up doing in Minnesota. 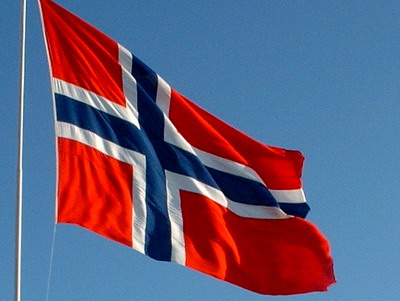 Most of us are proud of our heritage and realize that all our myriad cultures are what make our country different, great and INTERESTING, for Goodness sake. I can't believe how easily some haters forget that unless they come from a Native American tribe, we are ALL immigrants. How the Native Tribespeople can even bear to listen to the usually somewhat older white men spew about people coming into "THEIR" Country these days, I'll never know. We have a Statue Of Liberty we love, and that says right on it:

Give me your tired, your poor, your huddled masses yearning to breathe free, the wretched refuse of your teeming shore. Send these, the homeless, tempest-tossed to me, I lift my lamp beside the Golden Door!

So there. Solutions, not spew. Thanks.

Anway, YAY NORWAY!! We've always had great pride in our Motherland, and the good ideas they come up with over there, like Lefse, and the Nobel Peace Prize. But the best one yet in my opinion, is the genius idea and monumentally important undertaking of the Svalbard Global Seed Vault, (also called "The Doomsday Vault") on Norway's Spitsbergen Island, 810 miles from the North Pole.

They have blasted deep down into the permafrost of a sandstone mountain, to create a place to store seeds from all over the world, in the event of a horrible natural (or Man-made) disaster that would destroy a country's vital crops. They take seed donations from anywhere at all, and the country remains in charge of their own seeds, though the building cost was put up by the Kingdom of Norway.

The seeds are safely stored deep underground, with the capacity to be preserved for hundreds, perhaps thousands of years. There are three chambers, each with the capacity to store 1.5 million seeds (only accessible in the event that seeds are lost for any reason). You reach the vault via a long tunnel, entered into through a portal above ground, lit with Aurora Borealis-like trippiness. Stunning, in its beauty, and ingenuity alike. Ahh, thinking globally! How refreshing. *You really should study more about it at the link above. It's pretty cool.

With the recent nightmare of the BP Oil Spill (CRIME!!!) we are more aware - I HOPE - of what can go so badly, and possibly irreparably, wrong in our natural world, and stop doing those murderous things. Unfortunately the Svalbard Vault only takes seeds, and won't be able to replace precious Gulf marine life. But their forethought is not only impressive, but necessary, as we watch the filthy oil execs scramble for fixes well AFTER the fact.

I was walking down my street this gloomy Venice morning, and ran into my neighbor, Sven (he's really named that, I'm not just giving the story a Scandinavian twist), and he was out putting a stake up for a wind-blown tree. Next to his curbside corn crop that is already knee high. We spoke only about natural stuff, and though he did have a Bluetooth thing in his ear, we could otherwise have been in anytime, anyplace, talking about the crops and weather. It was kind of great, and again, felt so much more real and important than anything else we could small-talk about. It IS important.

So thanks, Norway, for looking out for the rest of us. Thanks too for providing my ancestry, which I'm very proud of. And I'm not at all ashamed to say I'm an Immigrant.