September's Venice Art Crawl was one for the history books. SUPER fun, all evening long. This was the second "Afterburn" edition, with Venetians returning from Burning Man bringing some of that Playa to the middle of closed-down Rose Avenue. 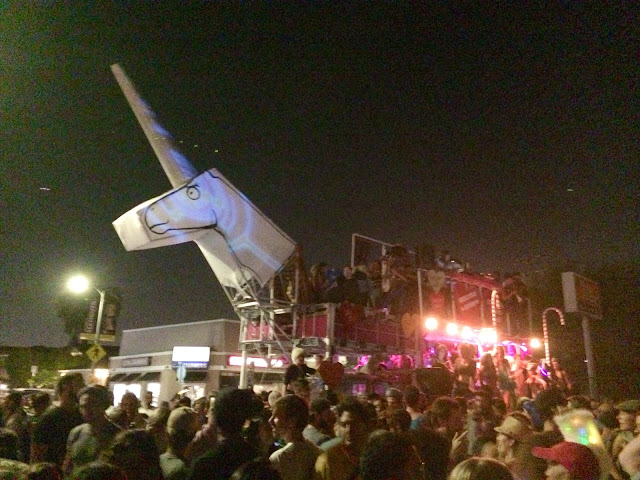 The street was closed between Third and Fourth Streets, with art installations and colorful crowds of Burners and just folks out walking their dog that stumbled upon this eye and mind blowing art extravaganza. 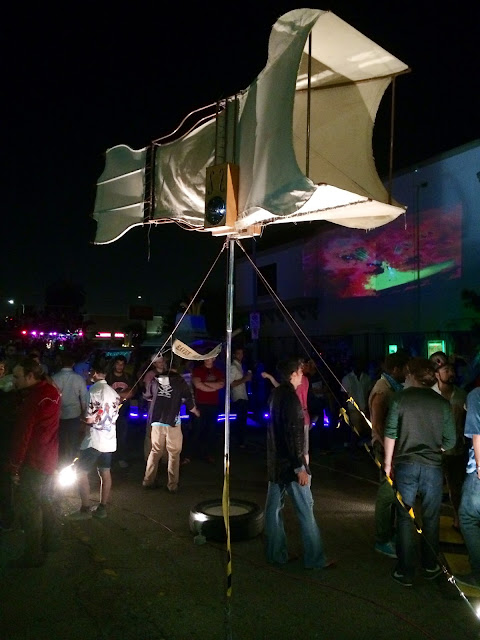 It was a pure celebration of FREEDOM, in art, in dress, and in the collective minds of everyone there. Everything was all lit up, and music was thumping from the giant rave scene anchored by a giant Trojan Unicorn, filled with dancing revelers. It was awesome. 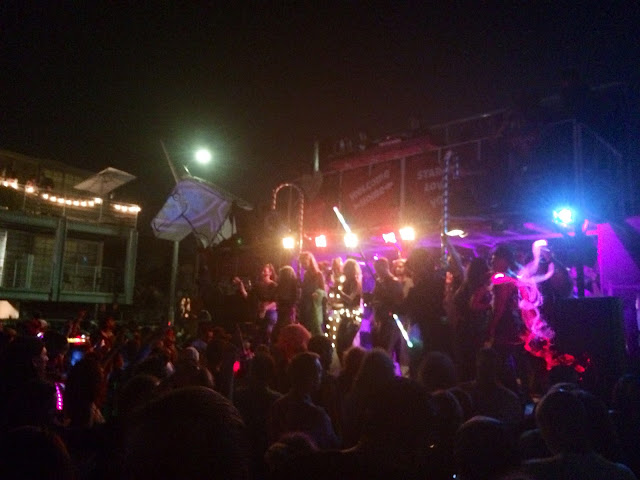 There was so much to see, from the art to the costumes, but the best part was bumping into friends every few feet. To a person, all said, "THIS is why we love living here! THIS is what Venice is supposed to be like!" Exactly and Amen. 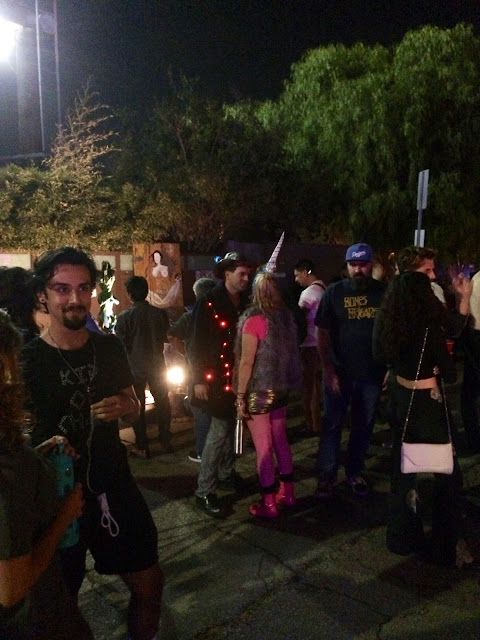 The Yellow Submarines were present, with a little chill camp between them. 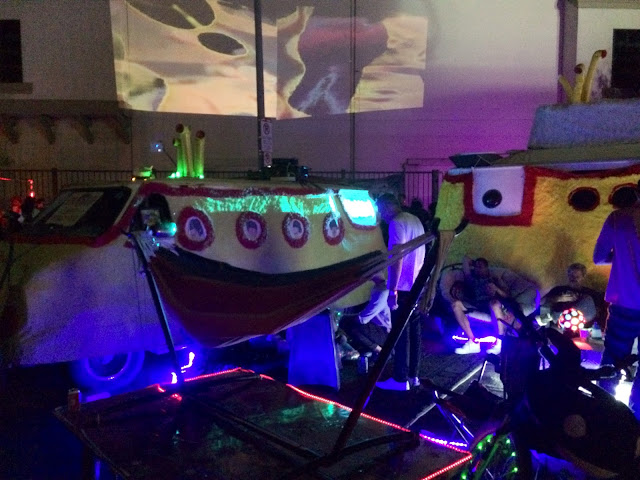 There was live painting going on up and down both sides of the street, with the art fully available for purchase, and inspiration. 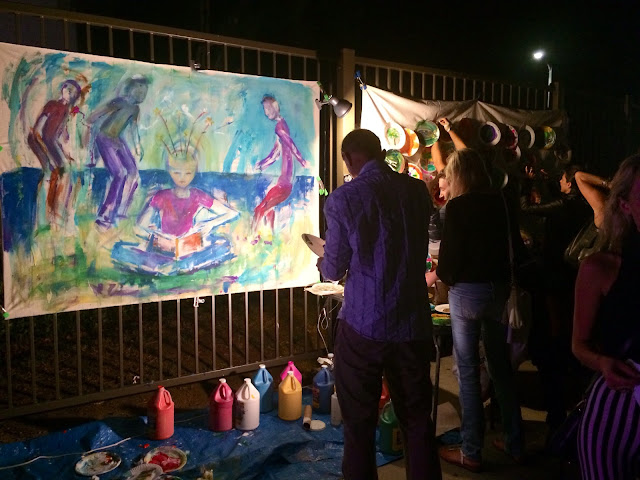 There were a lot of interactive things going on too, that gave you a good feel of what it must be like at Burning Man (I've never been. I'm cool with that.). There was a keyboard sound studio thing you could make your own beats in. 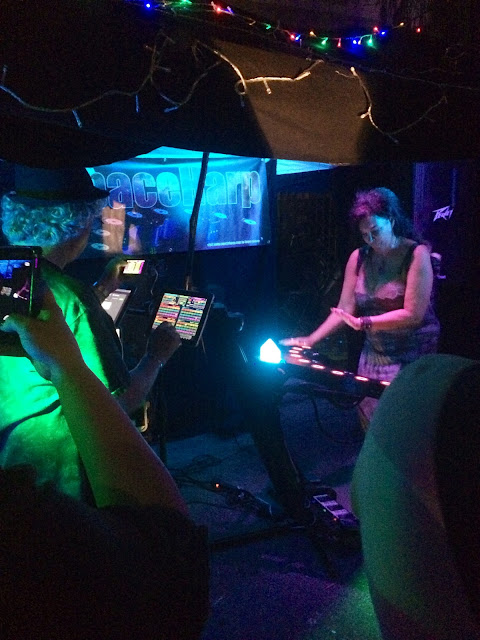 I think my favorite piece (other than the unicorn) was this flat stringed instrument thing that a whole group could play together on at once. It brought unity through music, and friendship through jamming. I loved it. 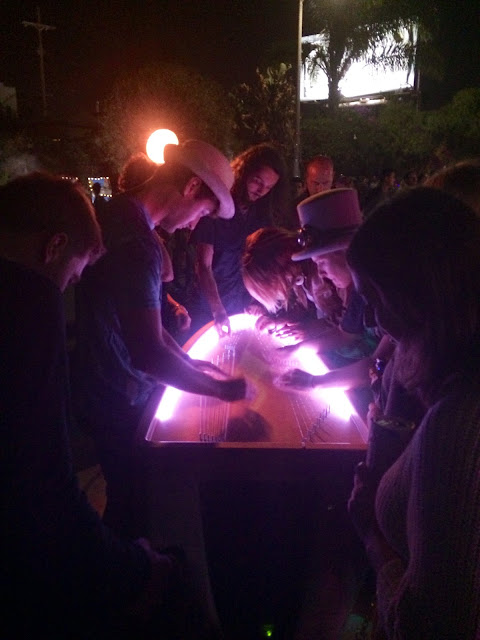 There was a big bird cage people could sit together and chill (and be photographed in). 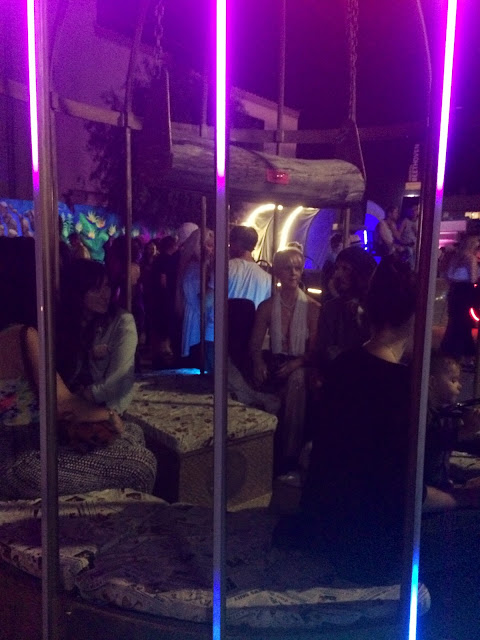 There was a covered wagon with people piled high atop it, perhaps on the way to the Unicorn Stampede at the other end (People in unicorn costumes running). 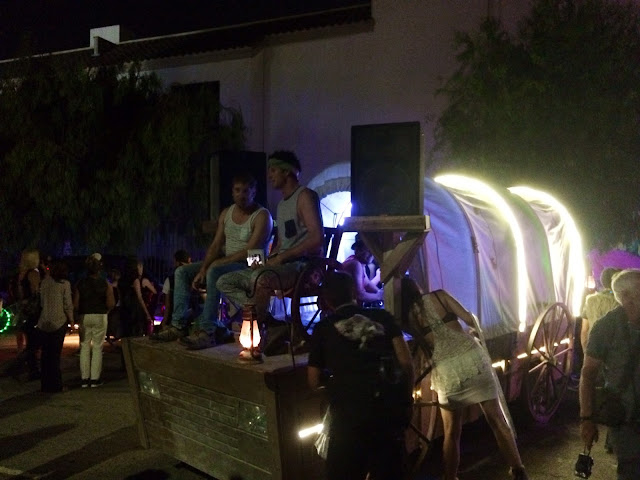 There was a neon corn hole game and a giant Connect Four people were playing. Pretty Sneaky, Sis! 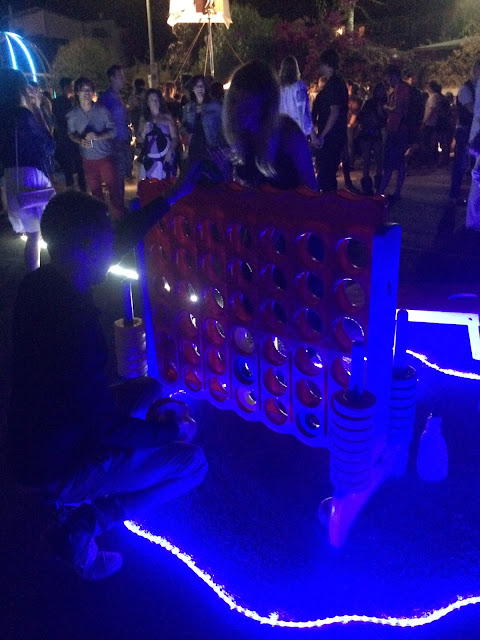 There was no police presence at all, that I saw, and that was extra great. No one being hassled for nothing, just people having a great time. 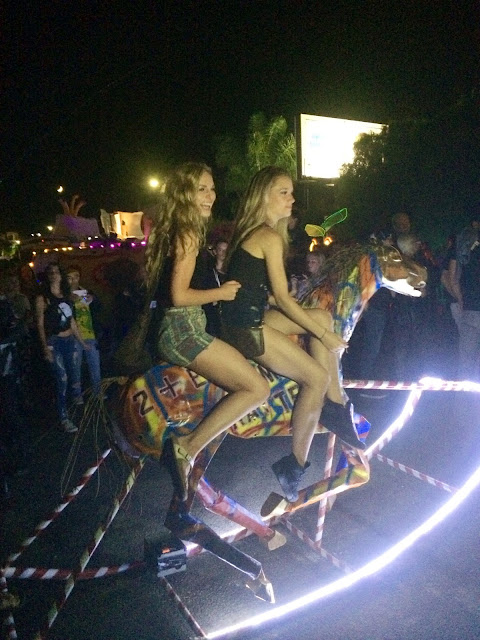 There was a complete mingling of the Skid Row West population on Third and Rose, the hipsters that hang on Rose, and friends and neighbors that live for these moments in Venice. Again, totally why we live here. 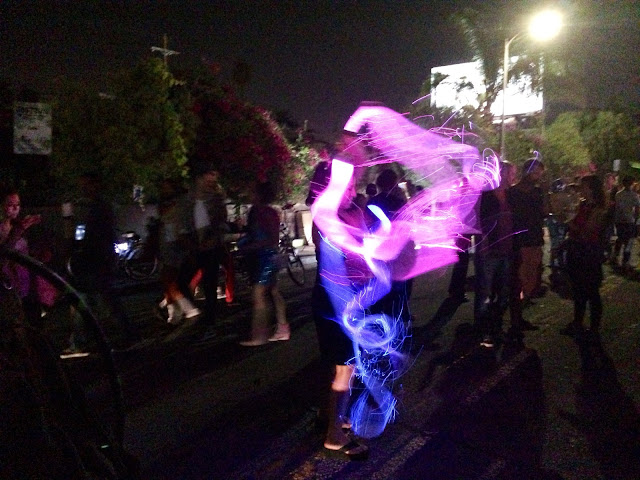 After seeing pretty much everything and everyone (except Alex Rodriguez!) on Rose, there was still a lot of art to see, with Art Crawl venues stretching all the way down to Washington (the end I never seem to make it to, sorry!). After one amazing glance back, we set off to see what else we could see. 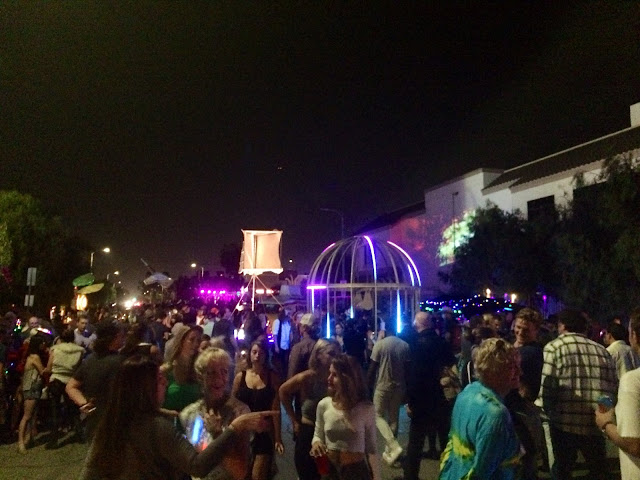 On the stroll South, we ran into a French couple looking at a map. I asked if they needed help, and they were trying to find the main part of Main Street. I pointed them in the right direction, and told them to take a detour on Rose. They had no idea what they were in for, and I totally wished I'd seen their faces. Hope you had fun, Frenchies! 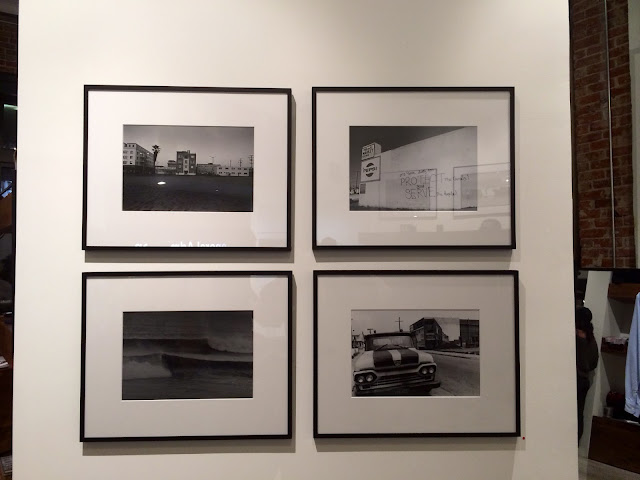 On we went to the slick new men's surf and skate wear shop, General Admission. They were showing the awesome photography of Akira Kobayashi put on by Kana Manglapus featuring Venice back in the day. They were also serving up cocktails, which we enjoyed while spilling out on to Brooks Avenue and chatting with friends. One friend asked of another, "Do you two know each other?" To which they replied, "Probably." It was like that. One lady said, "Doesn't this remind you of how First Fridays used to be?" Which is exactly what I say about Art Crawl every time, and why we love it so much. It feels like real Venice, and those that know, know exactly what that means. 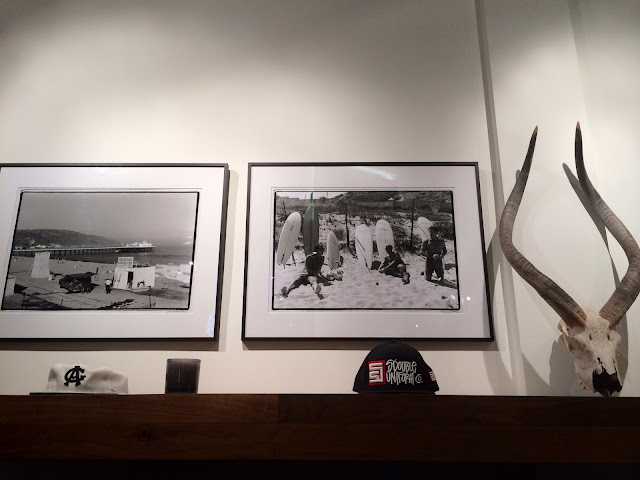 As nice of a time as we were having with the surf boys, we still had some time to see more. We gave our hugs and directions to the next spot, and headed over to Solé Bicycles to see more surf and skate (our favorite) photography from Brian Averil. 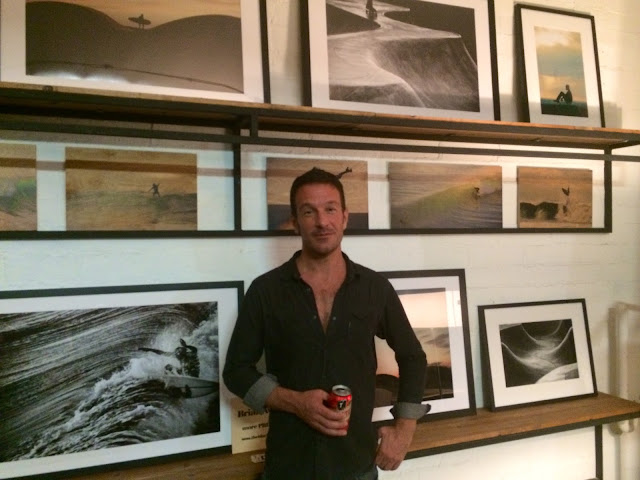 It was also super cool, made even cooler by having many of the works printed on Wood. There was a Venice company there, Blocksmith, who takes your photos and prints them on wood for you. I loved it, and you'll be getting a story about them soon. 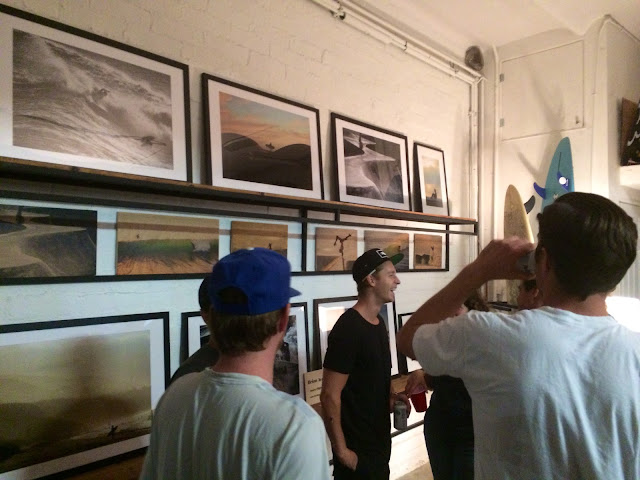 As the clock had not yet struck midnight, we still had some time to squeeze in a little more. Some guys were having a house party on Venice Way, celebrating the release of their magazine, Rank (a Venice-based art and literary publication. 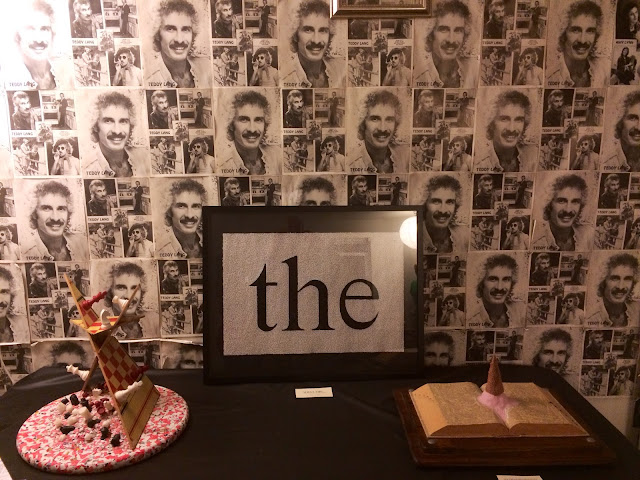 This was a great way to end the night, as it was a bunch of locals celebrating in a house (which they were cool enough to open to a slew of strangers, as everyone can do on the Art Crawl. Get your party spot listed for December!), comparing notes on all that we'd seen. They kindly had drinks and snacks, and even more dancing. 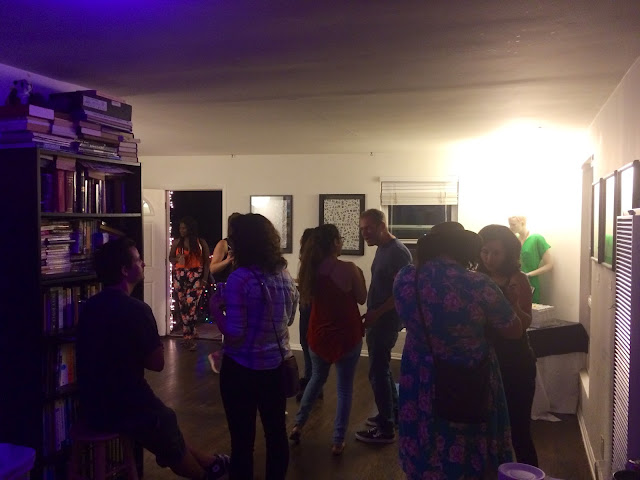 As I ambled on home after yet another house party, I couldn't help but smile the whole way home. It was a beautiful night in every way, in one of those rare instances where everyone agrees that it was. 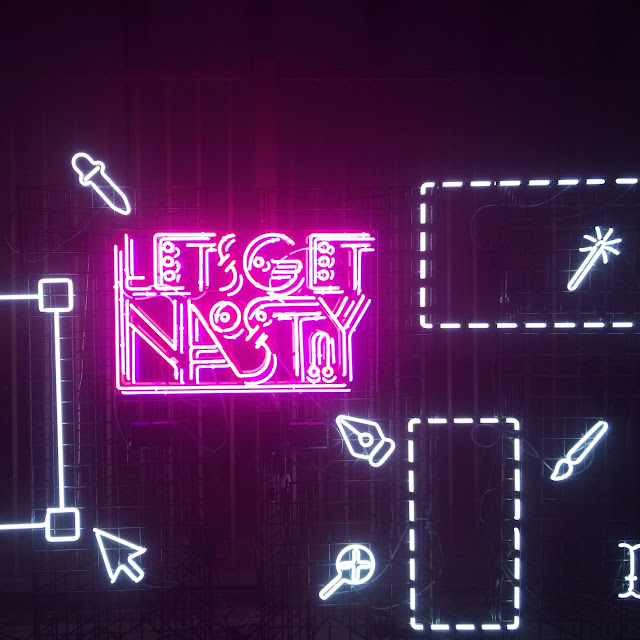 www.theblocksmith.comThe feeling that I think people go to Burning Man to try and feel is something that you can find and feel anytime you want, because it's inside of all of our people that we have right here every day. File this one under "I Love You, Venice" for sure.

Thank you to all the hard working volunteers that put on this wonderful showcase of Venice with each and every Art Crawl.