I saw a new mural by Chase on Abbot Kinney for the new store Vaute (a fashion house for animal lovers), that asks the very important question, When Whale It End, Sea World? 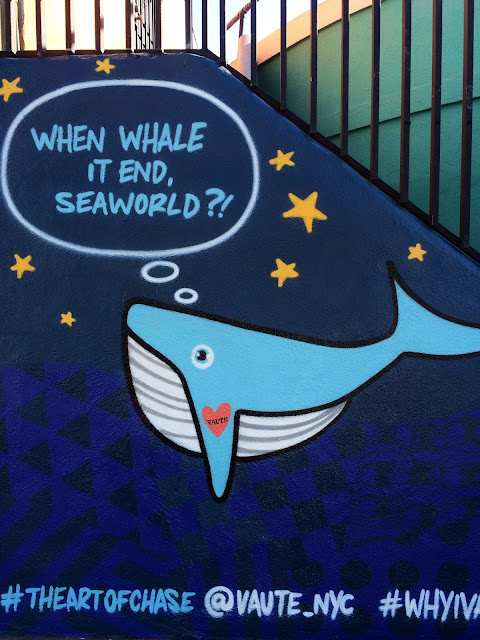 Seriously. When? I'll tell you. It will stop when people stop going there. When people stop taking their kids to see beautiful, giant whales kept in captivity in tiny pools. I'd think it would be the saddest thing in the world to take kids to see that. Save your money (and the whales) and take them to nature, to see these magnificent creatures in their natural habitat, wild and free. Don't teach your children that this is in any way ok.

You need only to watch the documentary Blackfish once to feel this way, but it should really just be a no-brainer anyway. There was a great mini-series event on PBS a couple weeks ago called Big Blue Live that took viewers along whale watching with them, and it was pure majesty to behold these enormous blue whales having the whole open range of the oceans to traverse (and eat, breed, calve, etc ..). No one should feel right about these guys being held in captivity, never mind pay to take their kids to see this horror show.

Thanks for the reminder, Chase/Vaute!
Posted by CJ Gronner at 12:00 PM