When the sun rose yesterday morning, you just knew it was going to be a great day for the 31st Abbot Kinney Festival. It was HOT, it was bright, and everyone was all the way ready for it. I live right around the corner from Abbot Kinney, so you could feel the anticipation (and hear the tent poles clanking) all night long leading up to the big day. 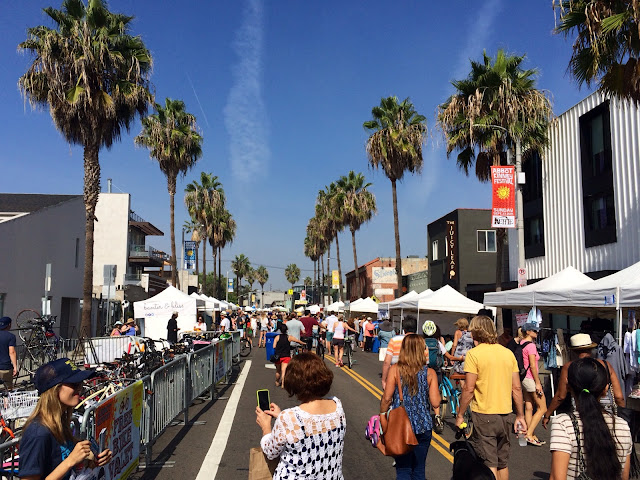 Booths lined the boulevard from Venice Boulevard to Main Street, where you could purchase or learn about pretty much everything under the sun. I have a friend who saves her jewelry budget all year to get new things at the Festival, and this year probably gave her a huge haul, as there were so many great artisans selling their original pieces. You could buy art, soap, clothes, chimes, hot sauce, or even get a massage ... the only problem is having enough time to see and do everything - which I never do.

The Abbot Kinney Festival is great because it ends up being a big reunion of your favorite Venice locals, many of whom now totally avoid Abbot Kinney these days, due to its influx of chain stores and scenesters. We again had an advantage this year to meeting up with our locals by having the "Locals" stage located at Andalusia. 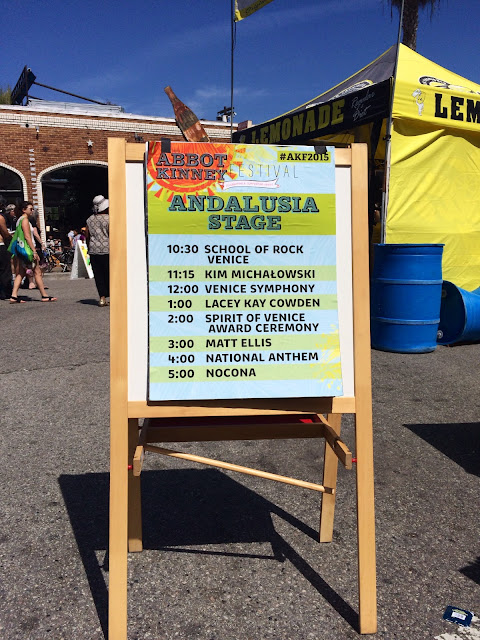 With the School Of Rock kids kicking it off, then Kim Michaelowski, then our Venice Symphony Orchestra, it definitely was the place to find your favorite people. In fact, the line-up was so good that it actually made it hard to leave and see any of the rest of the Festival! A good problem to have. We had the pleasure of watching our dear Lacey Cowden make a whole slew of new fans, while accomplishing the major feat of getting a festival crowd to be stone silent while they listened to Cowden weave her musical spells. It was awesome. 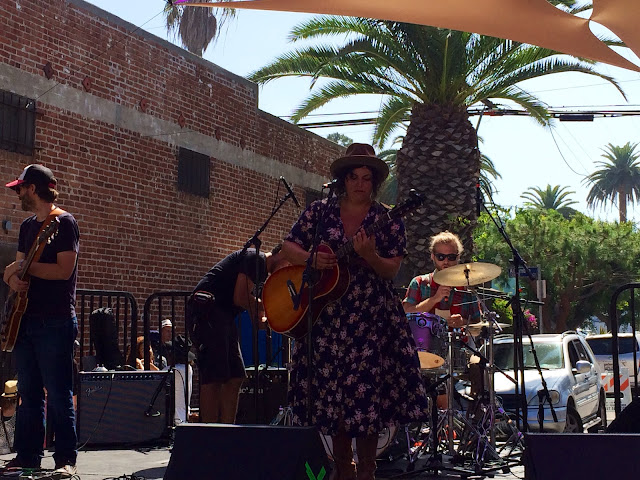 The Spirit Of Venice Awards were appropriately given out at the Locals stage, and I was so happy to see my friend, Edizen Stowell of Venice Paparazzi, receive her richly deserved honor.

WIth a break in the music, it was time for a quick lap to see what and who else we could see. The kids area down at Westminster was very popular for families, though the Ferris wheel looked a little rickety for my taste. Also on Westminster was an area for the chalk artists, a Gary Palmer spearheaded project that hopes to become its own fun festival soon. 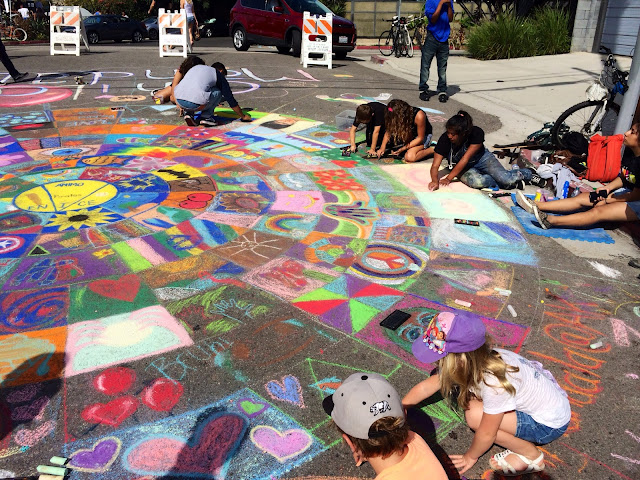 Kids were taking part in a big colorful chalk mandala, exactly the kind of participation and color you want to see during your neighborhood festival.

After a quick spin through the Roosterfish, and stopping every few feet to greet a new old friend, we made it back to Andalusia to see Matt Ellis and his band blaze through their set.  Ellis organized the Locals stage, so it was beautifully curated with all our talented friends playing. His own set was a true highlight of the day, as our gang all congregated and danced around. Ellis and his wife/bandmate Vavine arrived in Venice ten years ago exactly, and the Festival was their welcome to town, so it was extra special to have them playing at it. 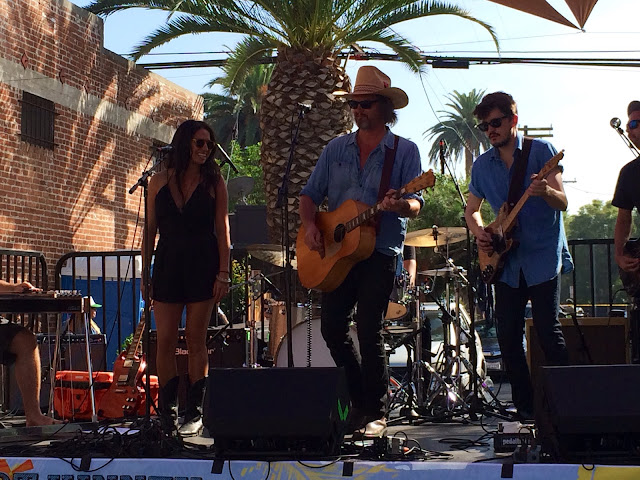 With all the hoopla of the day, I have to envy a kid who can sleep this soundly through it all. Beckett wins! I bet he had awesome dreams. 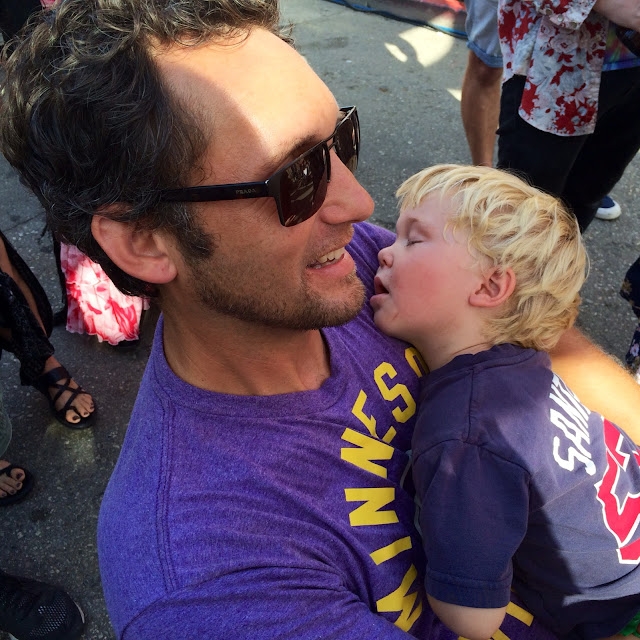 The great National Anthem played next, a fun and purely rocking set. My friend Quinn's reaction was not a good review of the band, it just got loud. 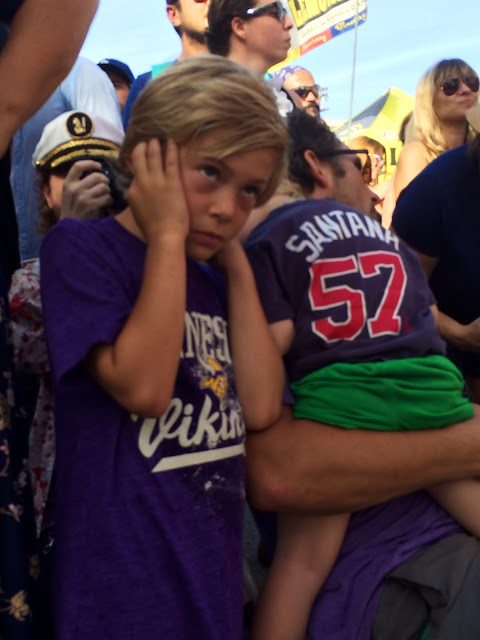 I kept running into long, lost faces, and to me, that is the very best part of the Abbot Kinney Festival. We always call it "Venice Thanksgiving", and this year was no different. People will avoid AKB all year, but they'll come back for the Festival. And they'll have a blast.

It's great to live right around the corner now, so we can have a headquarters. A place to take a break, use the bathroom, get out of the sun, take a nap, make road drinks ... I did none of that myself, but it was nice to know I could. There was too much to do to hang out at home! 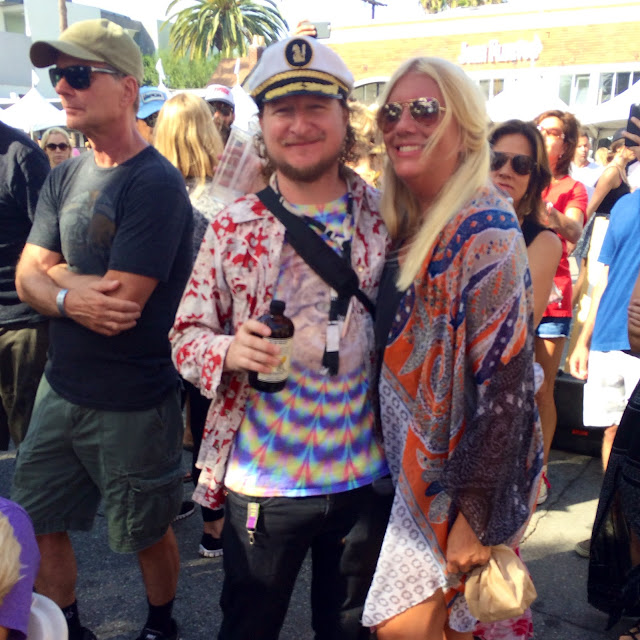 Our friends and neighbors Nocona headlined the Locals stage, and have quickly become one of our favorite bands after complete throw down shows at block parties earlier this year. We love them. 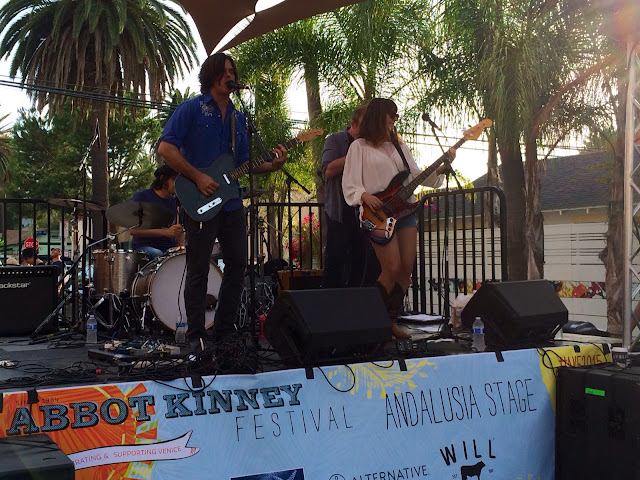 I also love that their kids and their kids' friends all play instruments, and are gearing up to take on the Locals stage for years to come. This year it was enough for them to watch their parents rock. 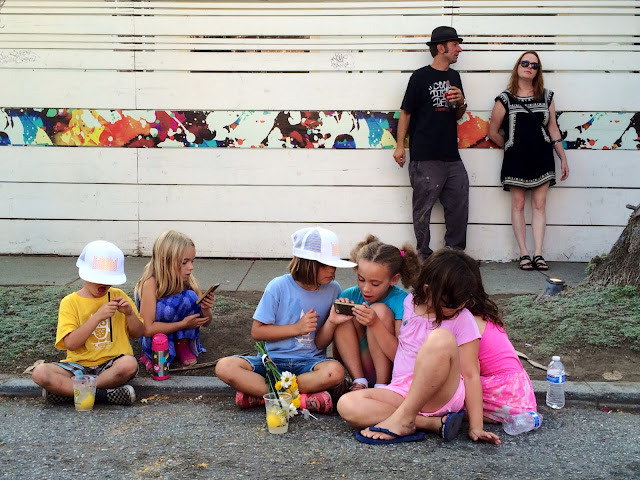 The sun began to set on the 2015 Festival, but things only got more heated up. Crowds flocked to all the watering holes and beer gardens up and down the street, DJs took over for bands, and everyone either kept dancing, or stumbled off to watch the lunar eclipse go down (I did the former and totally forgot about the eclipse until it was too late - oh, well.).

The annual sweep down the street by the lights and sirens came along to clear out the people, and with it, the clanking of the tent poles dismantling for another year. 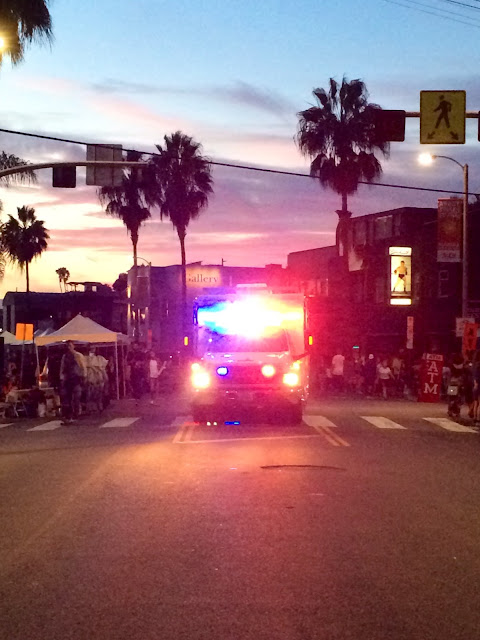 It was a completely beautiful day in every way, made most so by all the beautiful, wonderful people that came out to celebrate our home. I don't think of the Abbot Kinney Festival as a celebration of the boulevard, but as a celebration of the man, Abbot Kinney. As an all day opportunity to toast the cool dude who created the playground where we now dwell, and thank him for it. 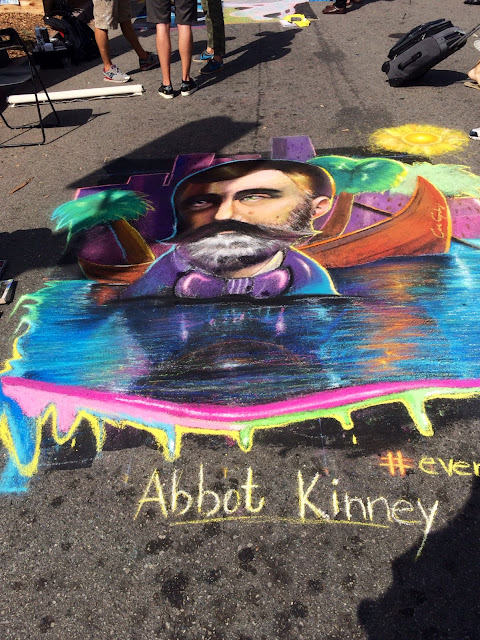 On days like yesterday, you forget about any differences among us and our individual ideas and ideals for Venice, and just get down with your people. Gratefully. 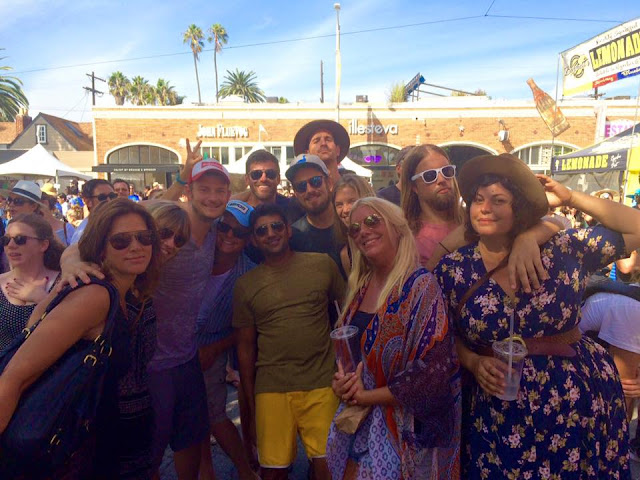 Cheers to another year of the Abbot Kinney Festival, and to all of us - for being there, and for being Venice.