There are a lot of great days in Venice, but yesterday was particularly so. Venice ArtBlock kicked off what is being called "Venice Art Week", with the trifecta of Block, Crawl, and Walk all going down in the same week this year. I'm partial to the Block, because it's all local artists, all opening up their (still) local studios, it's all free to attend, and you see everyone in town. All of the Art events are wonderful, but the  Block is grassroots, and all about keeping Venice not only about the ART but about the COMMUNITY. Which is awesome. 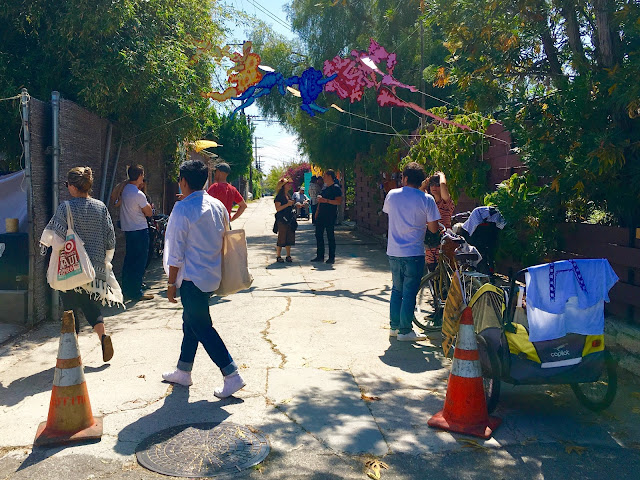 The May grey cleared out by about noon, and it was the most perfect day imaginable to be out and about looking at art and partying with your neighbors. Our first stop was to see dear friend Amy Kaps, who had just won the award for Best Experimental Film at the Fine Arts Film Festival at Beyond Baroque the night before. Kaps is a local legend, and her performance art pieces are some of the bravest and most thought-provoking things you can see. We clinked a glass with Kaps and her darling mother, Joy, and talked about how creative lives can sure be hard, but the Universe really lets you know when you're on the right path, and it sustains you. Somehow. Thank Goodness. 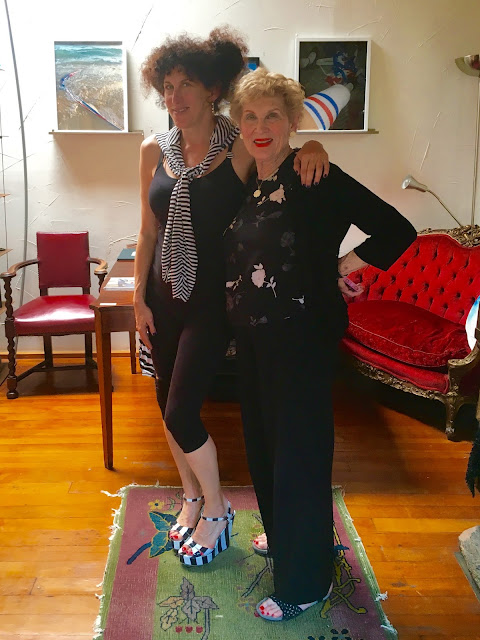 From that lovely visit, we crossed the street to check out the studio - and margaritas - of Rohitash Rao, Alexandra Dillon, Marlene Elise, and Jack Herzog. This might have been my favorite stop of the day, for the great art and for the great conversation. Rao's art is some of the wittiest work around, always with some biting commentary about our society, and painted on found objects, anything from an old fence to a champagne bottle. We talked about art and life and Venice and I felt so lucky to be surrounded by so many like-minded creatives all day. It's extra inspiring to know that so many people really are doing their best to make their lives be about what they love. 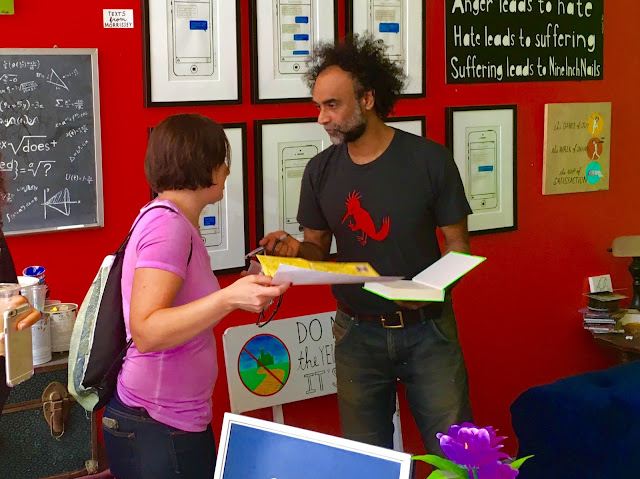 I also think Rao is great for having recently done this piece. Of course. 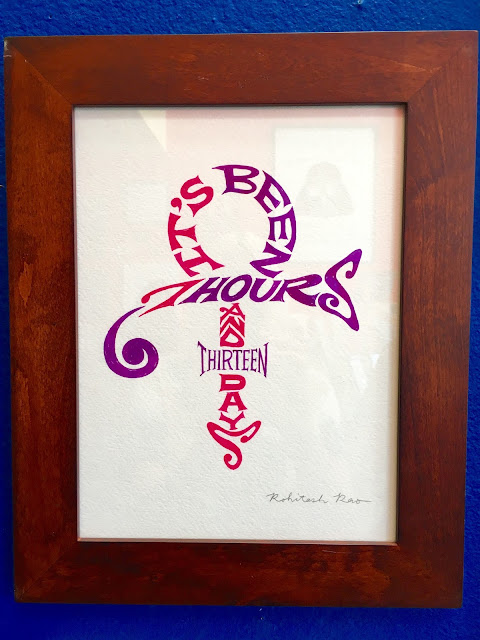 Dillon's dreamy work was great to see, as I'd only really seen her jewelry before, so to know that she also has gorgeous paintings up her sleeves was a delight to discover. 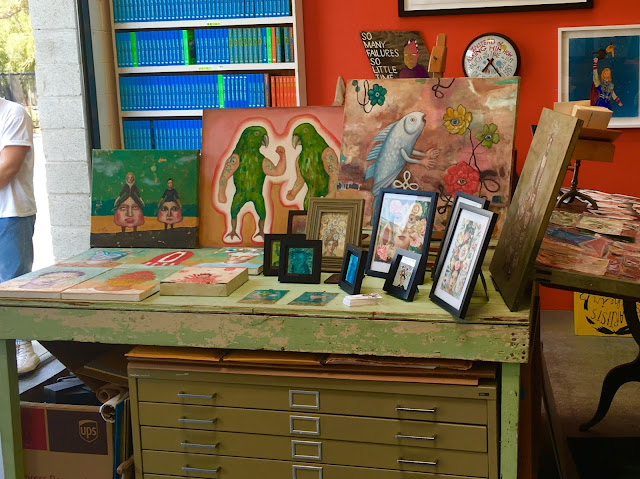 We were all happy to see Rao's young intern not only show his art for the first time. but to make his first sale! That's another angle to this kind of day and people ... people actually WANT to help and support each other. I didn't hear a word of competition or really anything but mutual admiration all day long. That is SPECIAL. 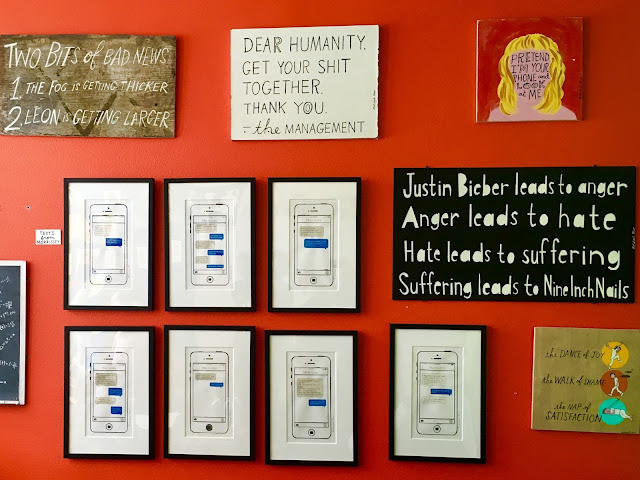 Also special is just how great the people of our community are. Hugs and waves were exchanged everywhere we went, and many times I was threatened to be left behind because my conversations were all going so long at every stop. That's because they were so great! I don't think I engaged in hardly any small talk at all, each chat was in depth, and I'd go so far as to say soulful. I got chills, I got tears in my eyes, I laughed my head off ... everyone was just being REAL. How great, but also how rare these days. I floated off to the next yellow flag, aware that the clock was ticking and there was still much to see. 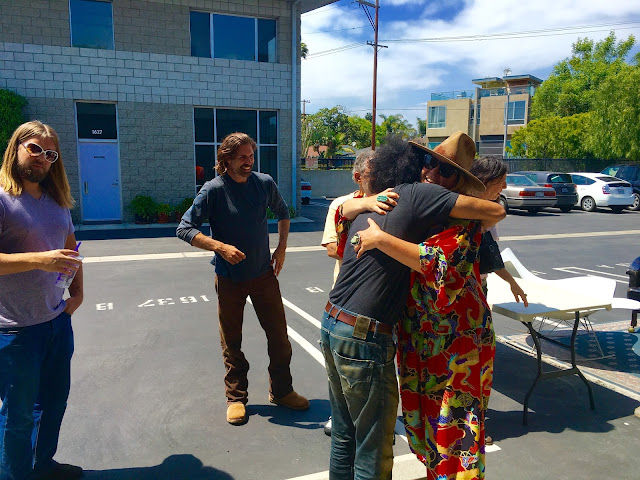 The Electric Lodge had Gary Palmer and his crew out making a chalk mandala that was beautiful, as well as a dance performance by Heather Rabun and Domonic Dean Breaux. I ran into Block organizers Francisco Letelier and Marybeth Fama there, which was funny because I was on my way to their space right then. I thanked them for all of their hard work, and we all just kind of smiled and beamed, because it really couldn't have been any better. Pedicabs and buses were shuttling people along to all the event locations, but we had the freedom of being on foot (or so I chose to look at it). You see more up close that way. 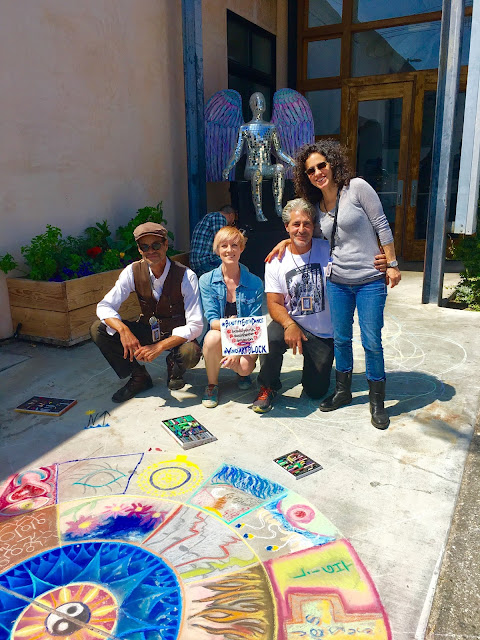 Cruising down 6th, we stopped in to say hi to Jules Muck. She was busy making t-shirts and giving them all away for free to anyone who wanted one. A little old lady from Moscow came by pushing her little dogs in a baby stroller, and left with new friends and a new outfit. You could tell her day was made. As was mine (I left with a shirt spelling "Disaster"!). 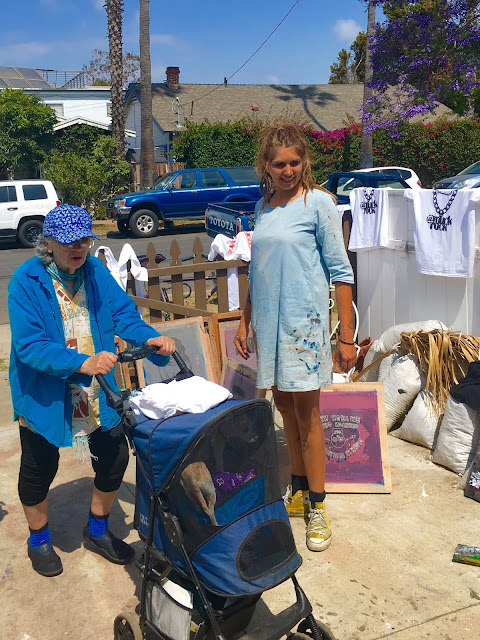 Off to Letelier's beautiful studio/yard, which was another location featuring a whole slew of artists (Letelier, Fama, Ruth Chase Boudreaux, Maude Tanswai, Martha Ramirez Oropeza, Ivo Vergara, Marianne Magne, Hagop Belian, Venice Arts Council, Andrea Bijou, Philip Folsom!!!). It was packed with a ton of friends to talk to, and also new ones to learn from. Like Leonardo Ibanez, who is from Peru and makes incredible masks from all recycled materials. 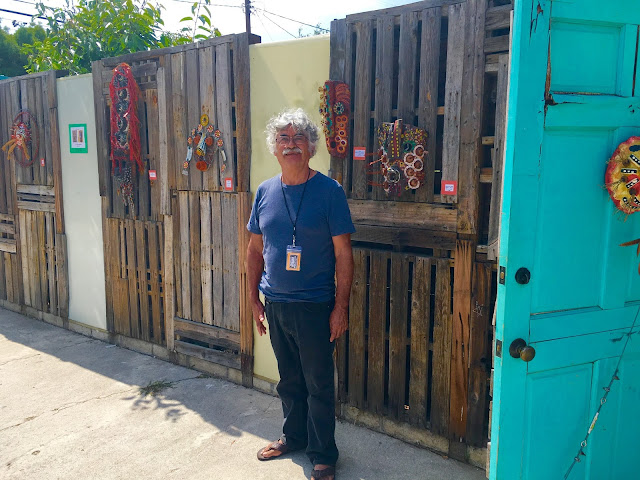 He pointed out the everyday items that made up his creations, like wine corks and paper beads he makes himself, and also explained how he makes his pigments for his paintings from beets and egg yolk. It was pretty fascinating stuff, and I could have listened to him a lot longer ... but I could tell the sun was already altering its course. 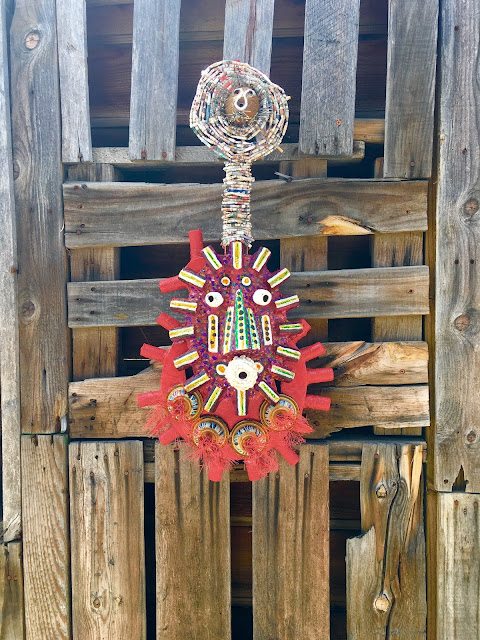 We clinked a beer in the garden with friends in the sunshine and it was so nice. That's another great thing about ArtBlock, is everyone is in entertainment mode, and set up for a party at each stop. Like, we kind of had to pace ourselves if we were going to still be upright by the end of the day. There's also a lot of walking though, so it somewhat balances out. Cheers! 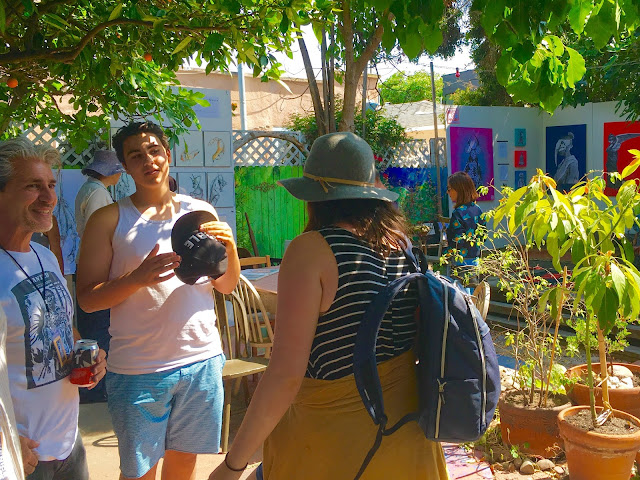 I chatted with Jason Hill about his Venice-centric work, and was happy to see people not only appreciating it, but hitting him up about buying it. As fun as the whole thing is, that really is the point - giving artists the awareness and the support to keep them here, creating and enhancing the entire town through their work. It seemed to be doing the trick. Everywhere we went. 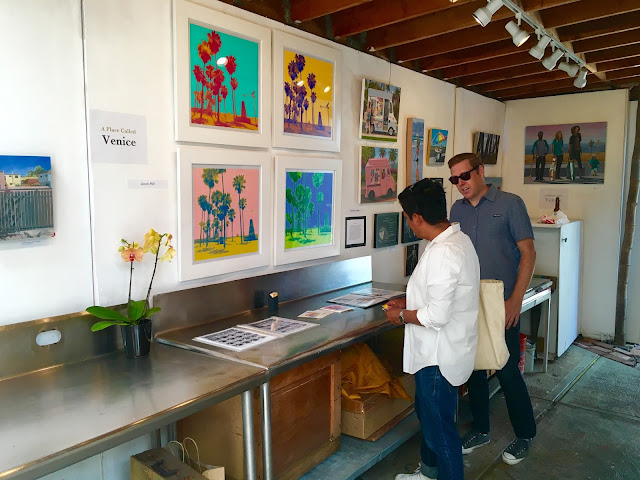 There was also live music all day, with musicians setting up in the alleys, yards, parking lots and sidewalks along the way. The alley outside of Letelier's studio was particularly raucous, with passersby joining in on the sing-alongs with gusto. No one seemed self-conscious, no one seemed shy, it was just all fun. FUN. 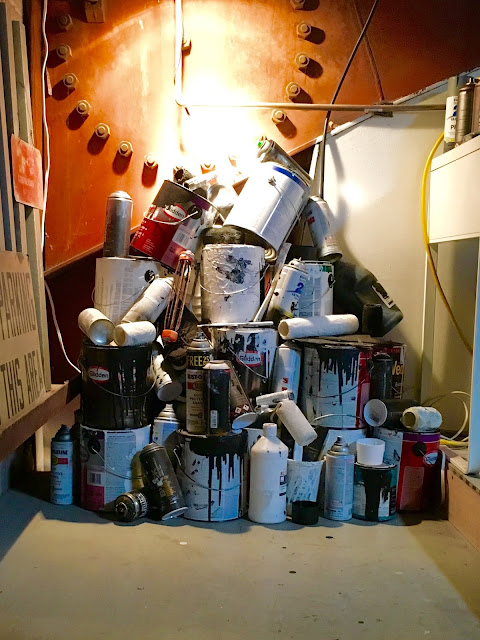 Over on Vernon, we went through all the studios there, with excellent work behind each door. I was sad and disappointed there, however, because a big sign had been put up in the hallway saying it would be this location's last Art Block because the landlord wants to double the rent, in another example of greed failing to recognize the big picture. There were Sharpies attached for visitors to sign their displeasure and it will be rolled out on that person's desk soon. Hopefully they won't want to be remembered as the Bad Guy. Which they will be, should they really kick everyone out. ENOUGH! 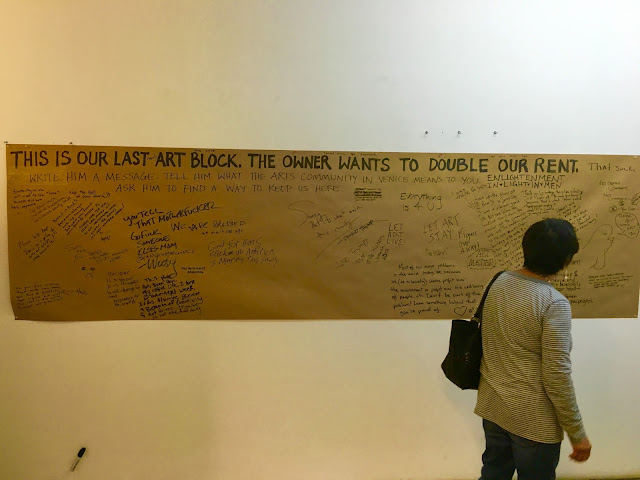 This feeling carried over to Sunset, where I saw my friend, Bill Attaway, had set up his wares on the sidewalk outside of his old - now empty and unused - studio. Where he was kicked out of last year. It's just ridiculous. And maddening. But, MAN, was I happy to see him again, and know that he's still here creating, and that our Artists cannot and will not be stopped by someone else's greed. Ever. That alone is a triumph. 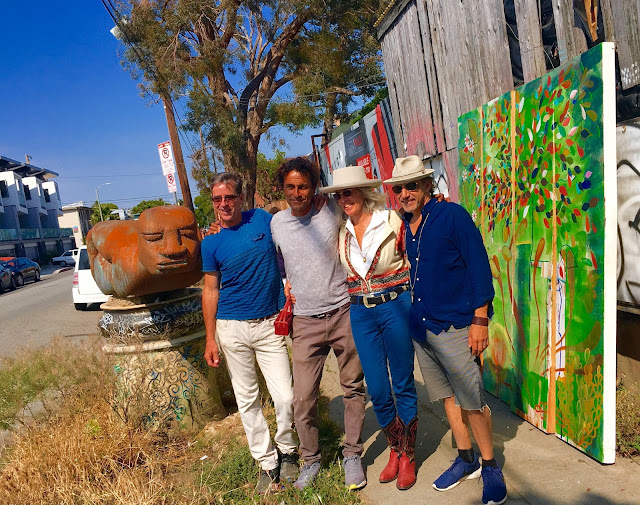 The Artiststore was packed with art enthusiasts, and it was cool to see not only Pamela Weir-Quiton's wonderful woodwork again, but also her fashion work, now being brought out and displayed. 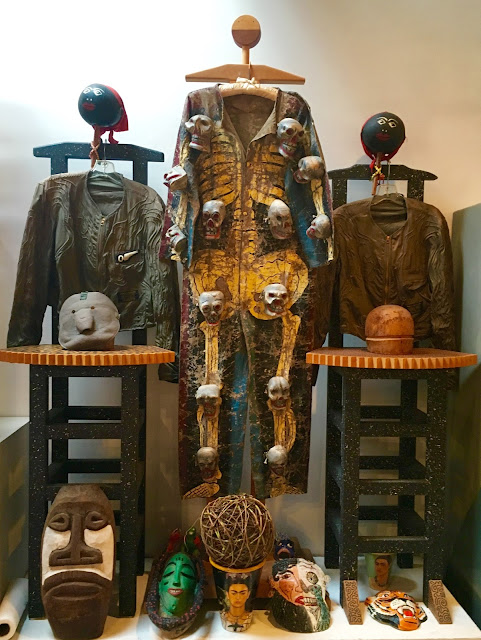 This is couture style super creative stuff, and it was fun to see people trying things on and experimenting. You could physically see inspiration happening, as one would wear that orange jacket with their fabulous white skirt, etc ... and you heard the voices raise a notch with excitement. It was cool. 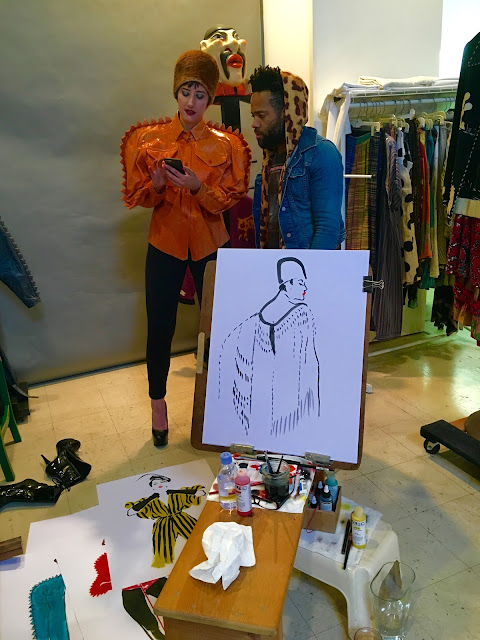 The Temple Of Mediclaytion was a crucial stop, not only because it was so great to see ceramic artist Patrick Johnston and his lady, Sam Savoia, again, but also because they were grilling up awesome burgers and dogs, and at this point in the day, that was extra appreciated. Thank you, TOC!!! It was also great to see the spark in someone's eye as they learned that they too could take pottery classes and it might be a whole new thing to love. Self discovery is one of the very best parts of art, right? 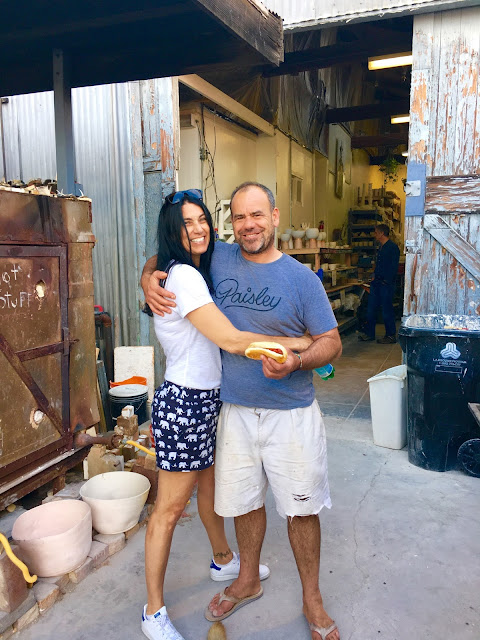 I made a quick hop inside Dustin Otterbach's rocket ship to say hi, and quick catch up with the dude that makes these real great metal bracelets, and also, you just have to jump in a rocket ship when you get the chance. 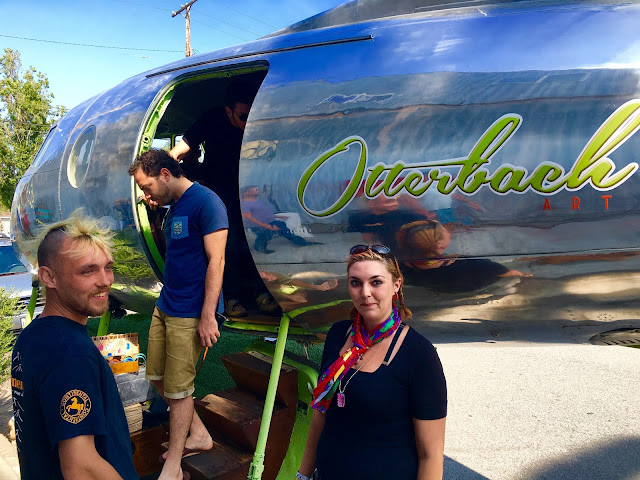 Bisco Smith and I slammed down some bones in his black and white studio, while Anderson Paak's exceptional Venice album played in the background. With frosty Tecates in hand, this stop was excellent - as is all of Smith's graffiti-influenced work. 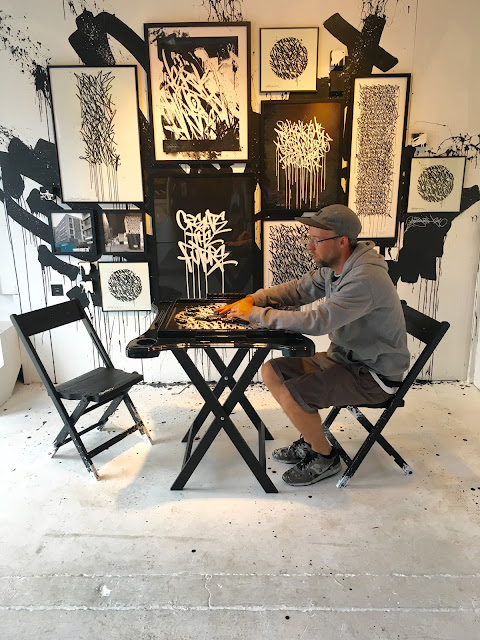 Texts were coming in from all over town about where to head next, from rooftop jams to beautiful paintings I'd missed way over on the walk streets. The loudest music was coming from over on Hampton at John Mooney's Moonlight Glass Studio, so that's where we rolled to next. The Venice Street Legends were playing their bluesy tunes, the grill was fired up, and people were dancing in the streets (ok, the parking lots)! Tons of friends were here, so this really became a true party. 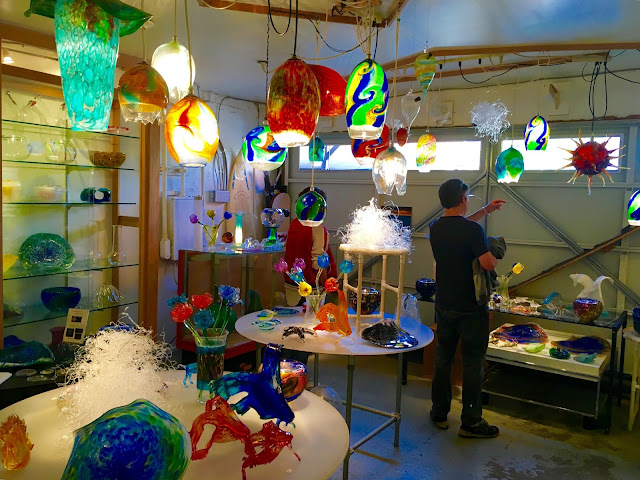 I hung with my bff, Erinn, there a moment, and thought that her perfect hat ribbon sort of summed up the day ... Love What You Do ... Do What You Love. Exactly. And everyone was doing it!! 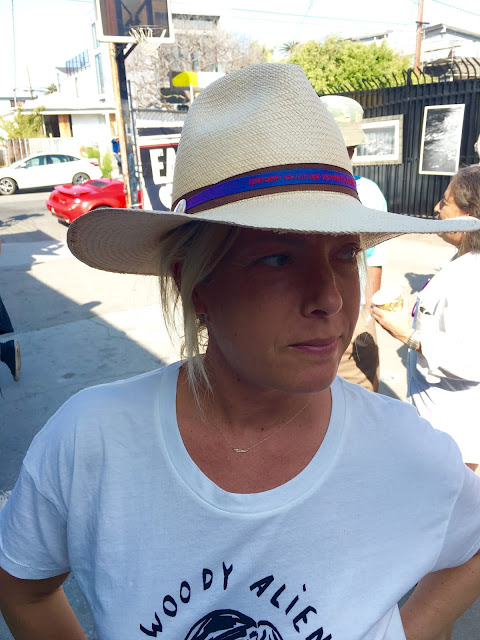 By now the sun was setting and real parties were getting going. Maps in hand, we tried to squeeze in any more art that we could, but at the beach we were met by maybe the best display of the day ... Flags from around the world from every nation were stuck in the sand surrounding the Drum Circle. People were going off, drumming and dancing and yelling in celebration of what had truly been an exquisite day in Venice. 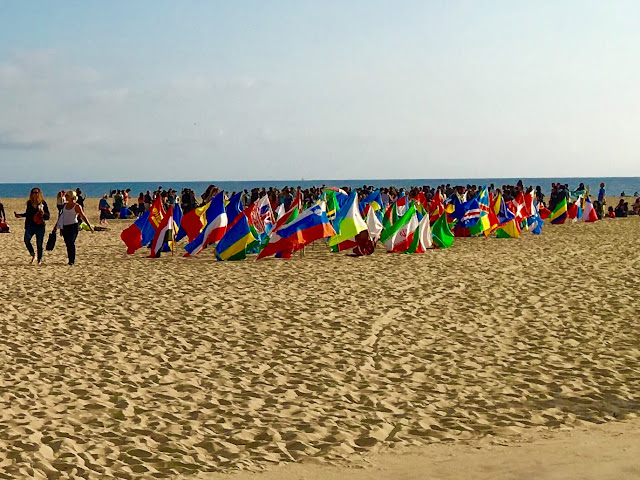 Along with the flags, just about every language could be heard talking and laughing along the way, and it was beautiful. Art and music and sunsets and color and dancing and smiles are all Universal. There were no barriers, just joy and community, and everyone having an equally great time ... right here in Venice, California on a sunny Sunday. And all was well, at least for the moment. Which is all we really have.

A heartfelt thank you to the wonderful Venice ArtBlock for an entire day of perfect moments!