Part Two of Venice Art Week went down last night with the Spring installment of the wonderful Venice Art Crawl, and it was as awesome as ever. I think I need to throw out a little disclaimer here, because I had some people disappointed that I didn't make it to see (and write about) their ArtBlock location. People. I'm one lady, usually on foot for these things, and when there's over 100 artists to check out, you most likely won't make it to all of them. I write these stories on my own time and dime, with no compensation from anyone, as a gift and service to the community I love. If you'd like to be mentioned, it might be helpful to introduce yourself ahead of time and let me know about what you're doing, because otherwise it's basically the luck of the draw, and time, and if I already know you and want to see you. Every story I write is meant to celebrate the people and greatness of Venice, and I guess I'd just be happy that someone is doing that at all - and I'll do my best to see it all, but if I don't ... you're still cool and maybe I'll see you next time. Or invite me over and we can do your own story sometime. OK. Thanks for bearing with that, and on to the Crawl! 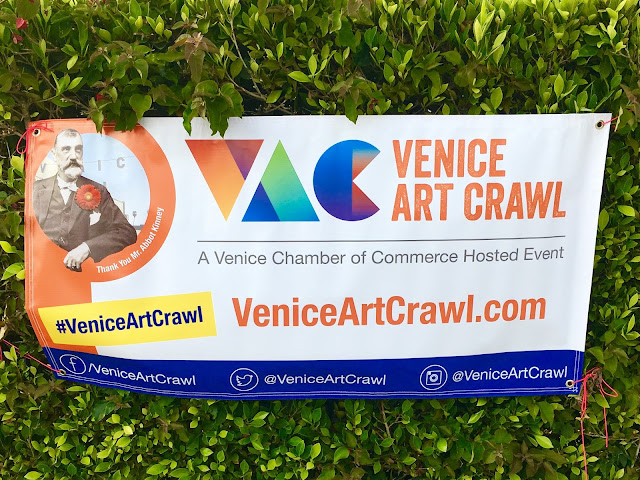 My first stop was again a visit to Amy Kaps, who this time had decorated the utility box at Venice Boulevard and Oakwood in her signature black and white striped fabric. 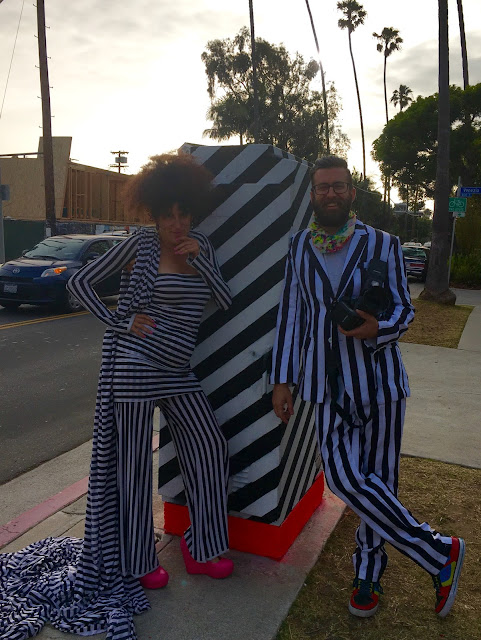 She and photographer Eric Schwabel (another Minnesota native!) were there in matching stripes, taking photos and generally causing a stir at that intersection. This was a fun way of letting people know both "The Power Of Stripes" as their installation was named, and that the VAC was indeed ON. 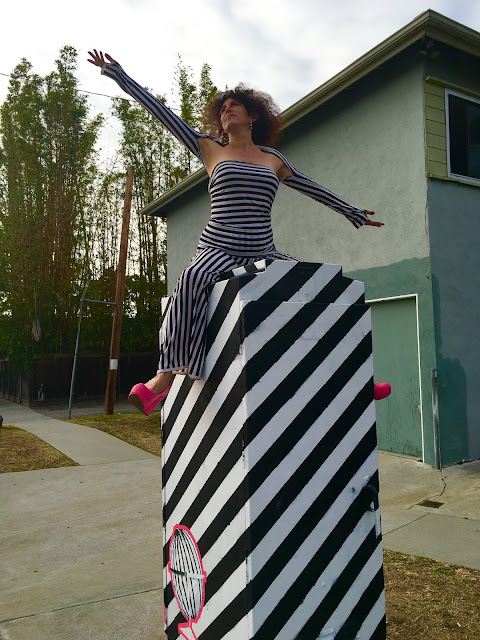 We had a lot of ground to cover, as usual, so from there we hightailed it over to Deus Ex Machina to see Beastie Bak - the awesome work of Sunny Bak from her time documenting The Beastie Boys all over the place. As Art Crawl happens at night, it's always a party at every stop, and Deus was no different, with kegs and a grill going out back, and a bunch of biker-ish guys at laptops inside. Funny. 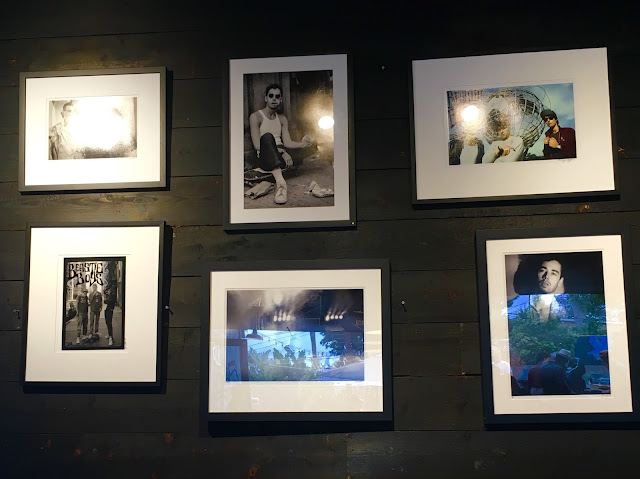 The Boys and Girls Club of Venice was showcasing the artwork of the kids in their programs, and had a stage set up outside with a whole bunch of families enjoying the sounds of what I think was also a kid band. The Rasta Bus was dropping off and picking people up all along the way, though we declined a lift because we had not yet seen it all over on Lincoln. 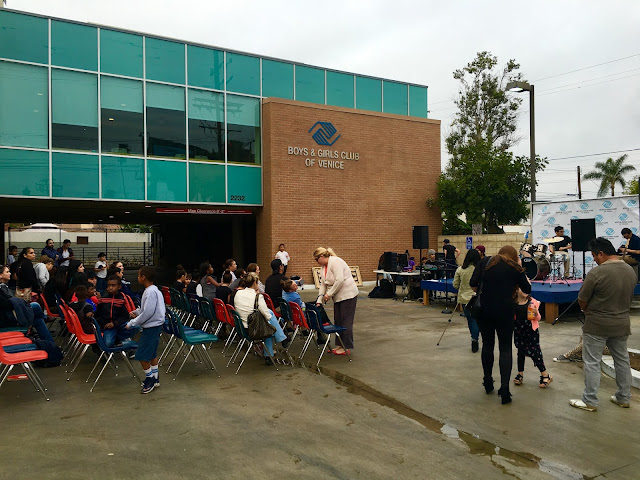 The Venice Love Shack was the headquarters for the VAC this time out, and it's always fun to see what they have going on over there. 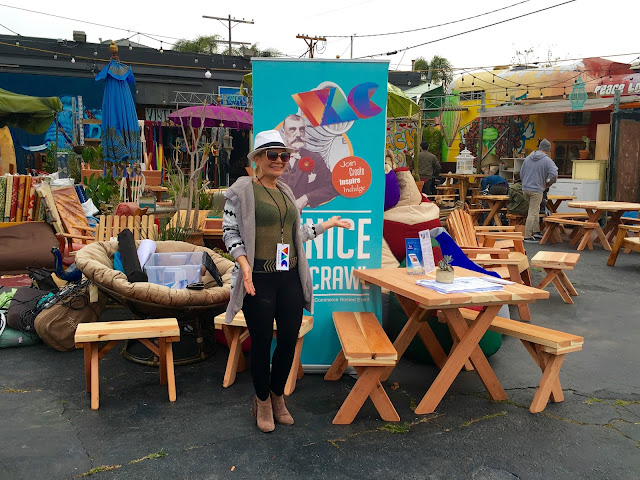 A bunch of friendly folks were hanging out, and I learned about the brand new Westside Collective trailer located there, with the cutest summery clothes I've seen in a while. There will be a return visit there soon, trust me. 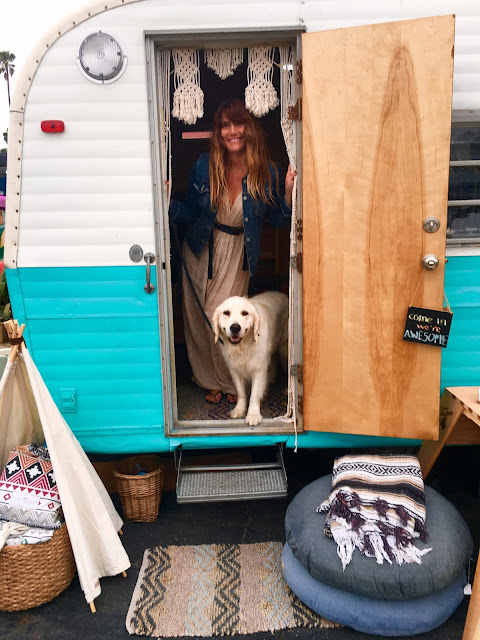 I hadn't been to the Venice Arts space on Lincoln in quite a while and it was great to see all of the good that they're still doing as an organization. I taught Creative Arts there as a volunteer for five years, and it was some of the very most rewarding work I've ever done. I don't think they have that class anymore, but the photography work of the kids at Venice Arts was as impressive as ever. 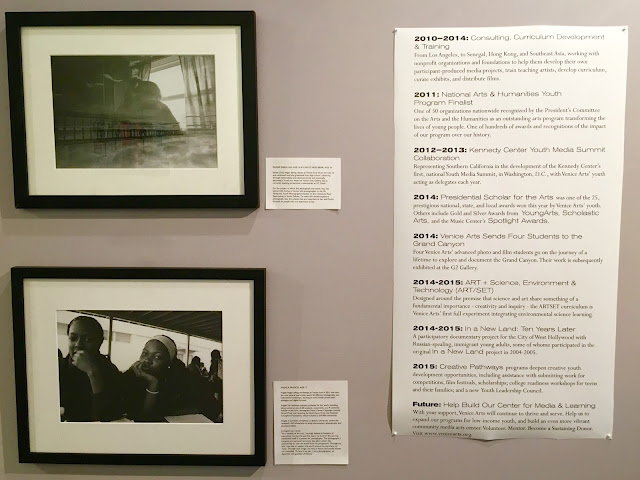 We had my friend's dog with, so were a bit limited by where we could go inside (sorry again if I missed you!), but we did as much as we could. We headed over to Abbot Kinney, where there was no one at the Wylie House, so we carried on over to In Heroes We Trust. Daniel Chimowitz was there showing his super original stencil art on canvas and clothes, and both Chimowitz and IHWT owner, Neely Shearer, were done up in his cool creations. 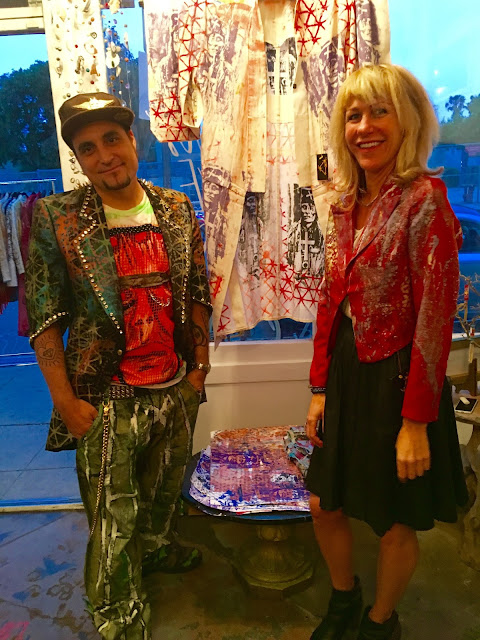 A welcome new addition to the party on Westminster was a old-timey truck called El Sombrero. They served up "fine frozen ice" - meaning slushie cocktails like Margaritas and Moscow Mules. After the brain freeze subsided, this stop found us kicking up things a big notch. 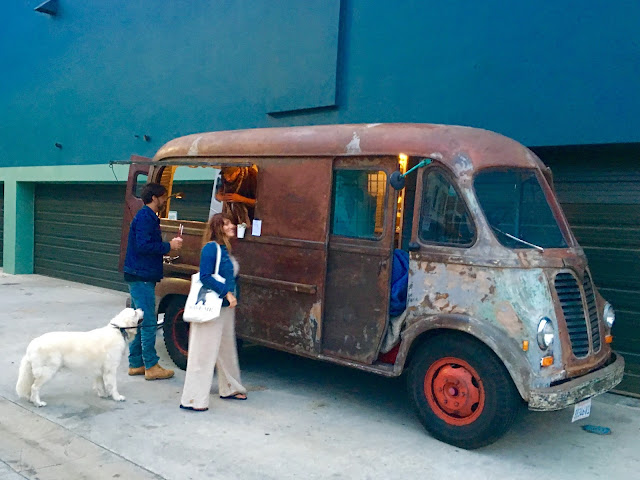 My first posse handed the baton to the next posse, and everything got rowdier. We set our compasses for the Windward Circle and found a fun band playing outside of Hama Sushi, and a bunch of art set up there on the sidewalk. It was extra fun and festive in the Circle, with the streets full of happy people having fun. Love it. 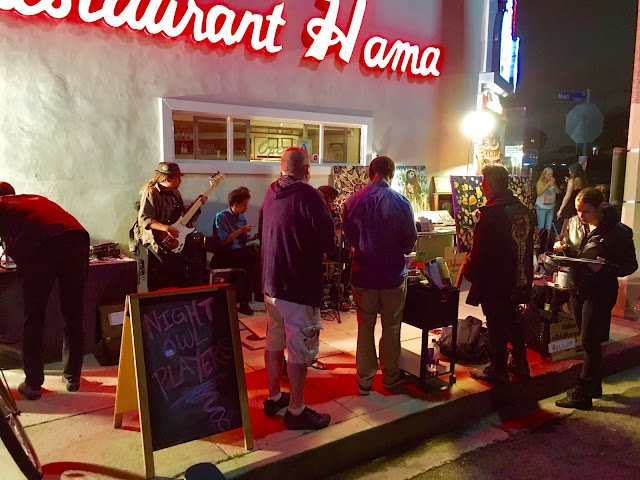 NextSpace (in the old video store space on the Circle) had a thing going on called "The Impermanence of Perception", where various artists (including homegirl Jules Muck) were painting with virtual reality brushes, and viewers could see what they were doing on a screen. I've done this at my friend's office, and it's way cooler to do it yourself than watch someone else, but we didn't stick around long enough to see if others got a turn, because friends were awaiting at the Townhouse. And by now we needed a thirst quencher. And my friend Big Cookie was lagging. I told him to speed it up because there was so much art to see, and he said, "No, you said this was the Art CRAWL, not the Art RUN." I stood corrected. Ha! 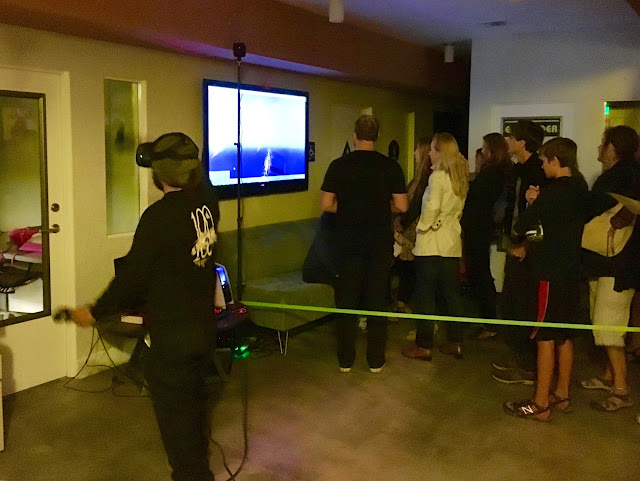 I like it when people set up bootleg artist sites on the VAC, and this time there were some guys displaying their work on the sidewalk between the Bank Of Venice and The Townhouse, and getting a lot of attention. The work featuring 3D shoes hanging off the telephone wires was my favorite. Right on, @Irvingjc! 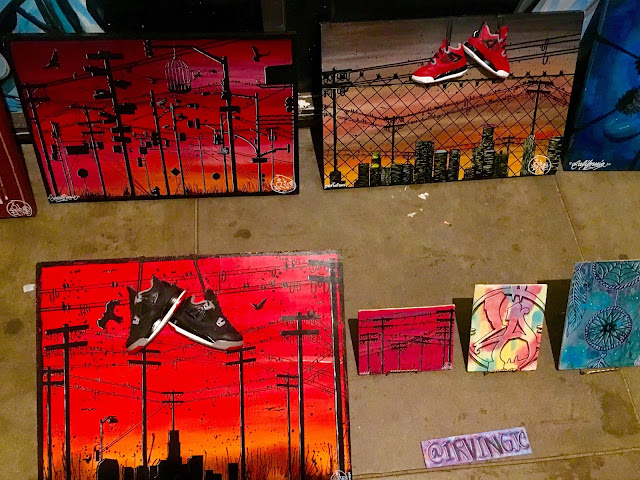 Andy Clockwise was spinning Prince at The Townhouse, so that took up more time than I'd intended (another intangible that can happen at these events, and if I didn't get to see your art because of dancing to Prince - well ... apologies again, but that can't be helped.), but by then the official hours of the VAC were over anyway.

We saw that people were still hanging on the sidewalk in front of Gotta Have It though, so we had to go see what was going down there, as it's always one of my favorite stops of the Crawl. The art there was by Chris Markland and Adam Christopher Bright, and it was all good. Markland's video work was projected on the wall, tunes were spun, and tequila shots were enjoyed. Another successful blast of an Art Crawl was on the books! 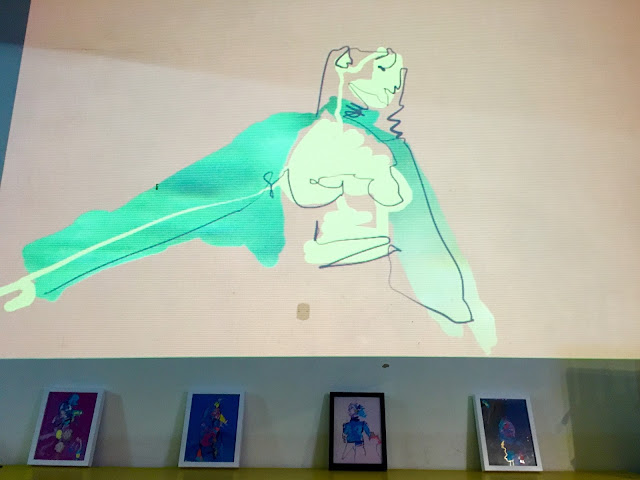 Then it was back to The Townhouse - and none of your business. Thank you (!!!) to all of the VAC organizers and volunteers! It's such a special thing you've created, and we all really love it. We're already looking forward to the next one - July 21st!

*Also, Kudos for having more than enough maps this time, VAC!