The Last Internationale In Hollywood - People Have The Power!

Whoa. I'd seen The Last Internationale play acoustic as part of showcases for Tom Morello and Ryan Harvey's record label, Firebrand Records, but I'd never seen them play their own show all plugged in electric. That all changed last night at the Viper Room in Hollywood ... Holy. Moly. 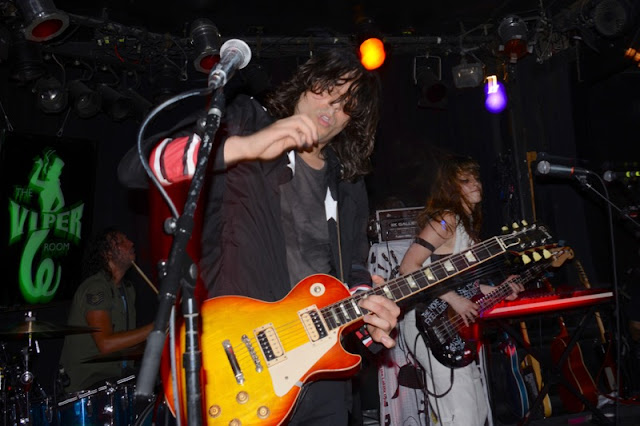 I got there just in time to hear the intonation of a recording of Gil Scott-Heron's "The Revolution Will Not Be Televised" speech, as the lights went down and the cheers rose up. This was a room of the TLI faithful gathered to not only rock, but to get fired up with the revolutionary spirit that permeates each of their songs. It felt exciting ... because it was. 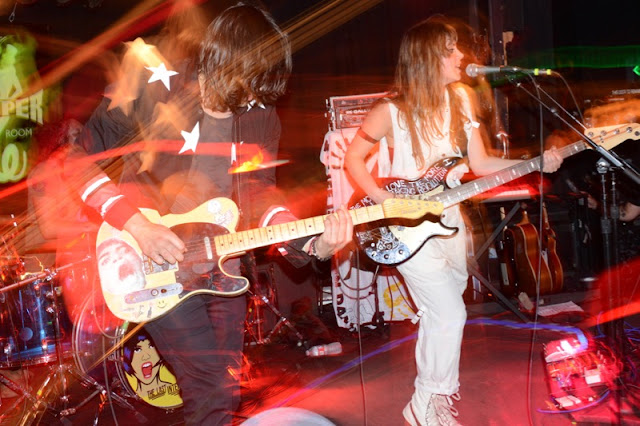 The curtain drew back and there were Delila Paz, Edgey Pires, and Fernando Sanchez - clearly ready to throw down. They opened with an a cappella version of "Berta, Berta", a haunting, spare number channeling the voices of the falsely imprisoned. Paz punched the air as she wailed "Oh, I go free!" - and with that, the night's tone was set. The Last Internationale means business, and the crowd knew it, screaming their approval, and their love.

"The Killing Fields" came next, and showcased each member of the band as a powerhouse superhero in their own right. Pires - who I've only ever heard play acoustic before - is an absolute metallic shredder when he goes electric! He wailed out a feedback heavy solo, and flipped his guitar over to reveal a "FUCK TRUMP!" sign taped to its back. This was met with roaring approval. Of course. 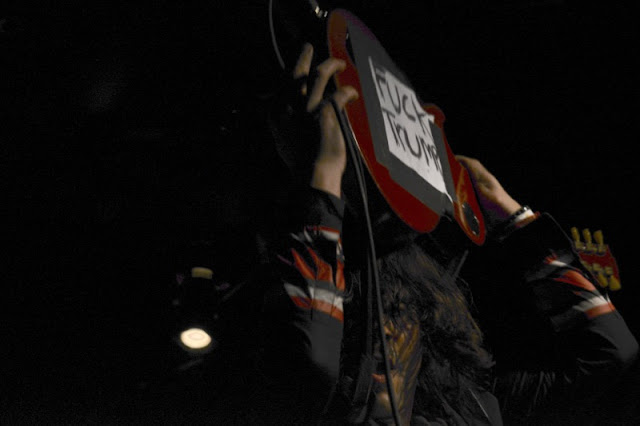 Paz belts out her vocals with no reservations, slaps her bass with total confidence, dancing around all the while. She is truly the rock woman the world needs right now. Super hot, super talented, but above all, super down to fight for justice and fight for the People. I was on board the first time I heard her cover Aretha in the tiny Genghis Cohen music room, but now that I've seen her front the full band show ... all I can say is LOOK. OUT. She is a badass, and you could see the audience falling in love with her instantly, if they weren't already. 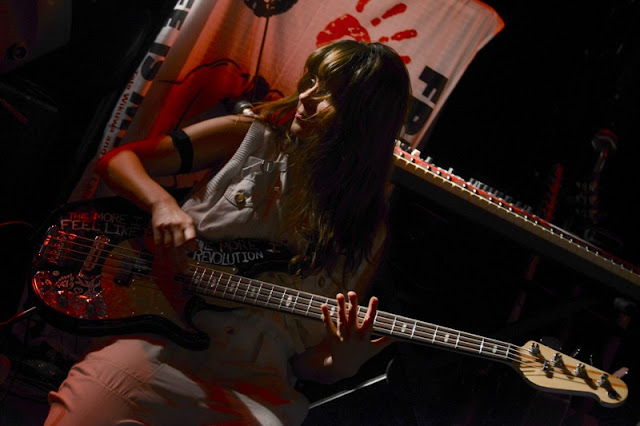 Sanchez is a friend of mine, so I already knew what he was capable of, but this band really gives him a great outlet to show off his monster chops. Extra effective and emotive drumming, holding it all together, but at the same time making it something special, and giving each song its own percussive personality. This is some power drumming ... at one point I even felt the bass drum's force in my feet through the floor, like the song was being drilled into us. Which it was. Another badass. 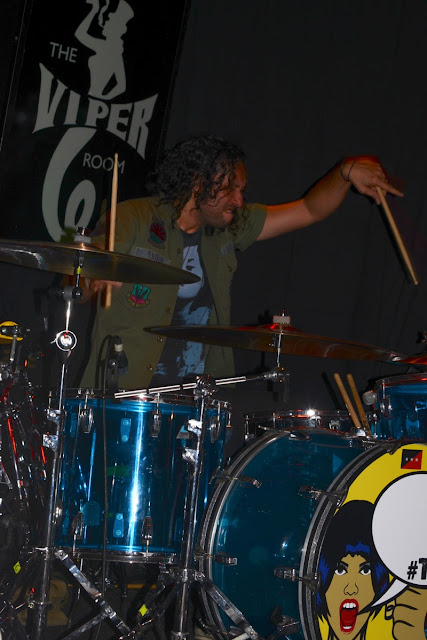 "Life, Liberty, and the Pursuit Of Indian Blood" followed, and the room shouted along in all the appropriate parts, as Paz exhibited shades of Janis Joplin, but also something entirely her own. "Fire" is off TLI's debut album, We Will Reign, and Paz explained that it came from dreams of past people coming to talk to her. "Those who fought for us are still with us. Whether you can see or feel them, they're there." I love this song, and its decidedly Native American vibe, that Paz punctuates with a sort of deep throated war cry. All I wrote in my notes about this one was "STRENGTH". Enough said. 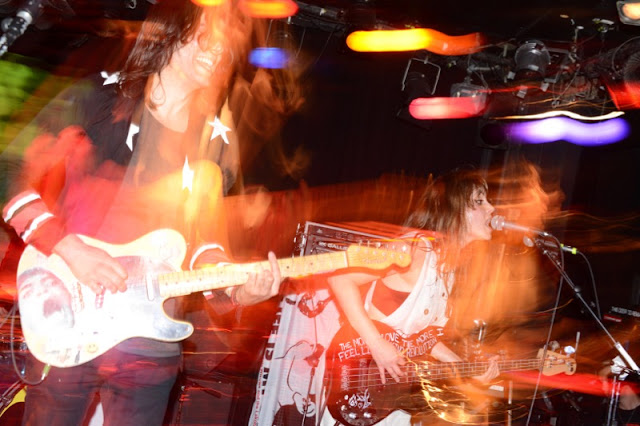 The title track "We Will Reign" was next, and as Paz sang, "Don't know where, but I'm going there with you!", the table of prospective managers I was sitting with gave each other the international raised eyebrows with a frown look of being impressed, and one of them said, "She can sing some shit!" to the other. That is a solid fact. 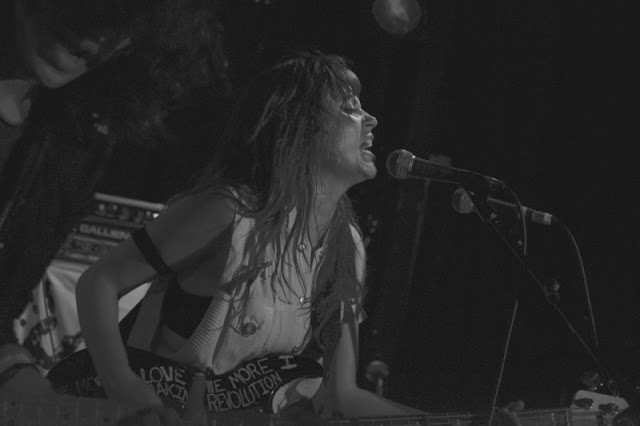 "We want to play a brand new one off of our next album," said Paz by way of introducing the extra fresh song, "Modern Man" - which is, as she said, "Pretty scary." As Pires in his military jacket and Paz in her coveralls and black arm band marched around the stage ruling it, this is the one that Sanchez blasted the drums so hard that I felt it in my bones. The climactic shouts of "Kill! Kill!" at the end were powerful, and, she was right, pretty scary. The modern man was followed by "Wanted Man", very obviously a crowd favorite. It began (and ended) with a superfast crowd clapalong that kept going throughout, and the band was dancing around enjoying themselves as much as the crowd. 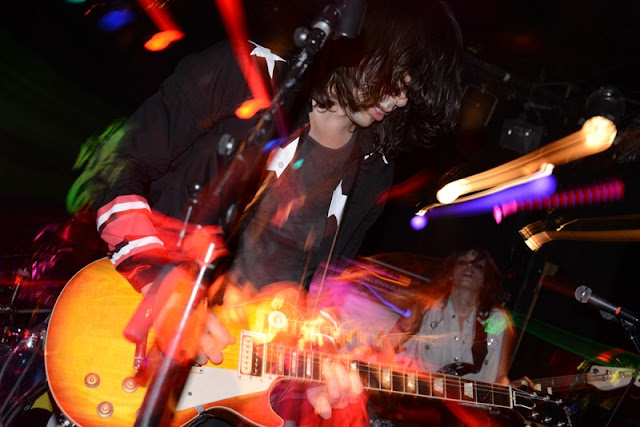 Paz took the stage alone for the next one that she sat at a little keyboard machine, saying, "This is the first time we've played this, please bear with us ... It's about when you realize you have a master, and you don't want him no more." "Master" was beautiful, and all the arms were up filming as this song made its debut. When she ended with, "Go ahead and break free, even if it breaks me," the room erupted in cheers (and the managers again exchanged that look). 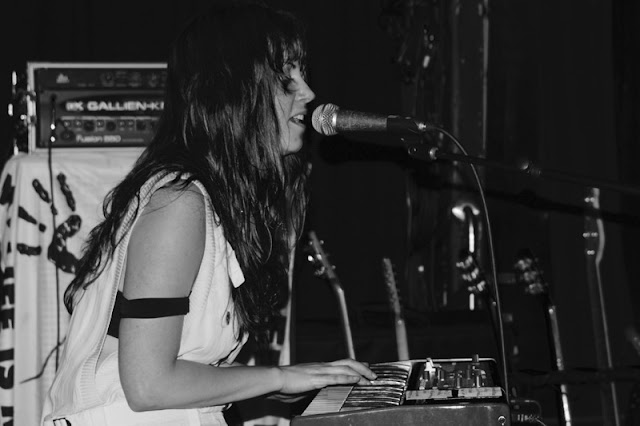 Pires and Sanchez returned - to SCORCH the place. They launched into "Hard Times" (about which I heard a guy say, "This is the hit." Correctly.), and not only were the times hard, so was the sheer ROCK of it. This is HEAVY stuff, and no one felt bad about not being at The Who show across town, because we had Pires throwing his best Townshend arm windmills around as he ripped through his solo, and this time revealed a "Fuck Hillary Too!" sign. Yes, TLI would have been total perfection on the playlist for the Bernie Sanders rally I attended the other day, because they too are all about the revolution that is HAPPENING. And you want music like this as the soundtrack, believe me. 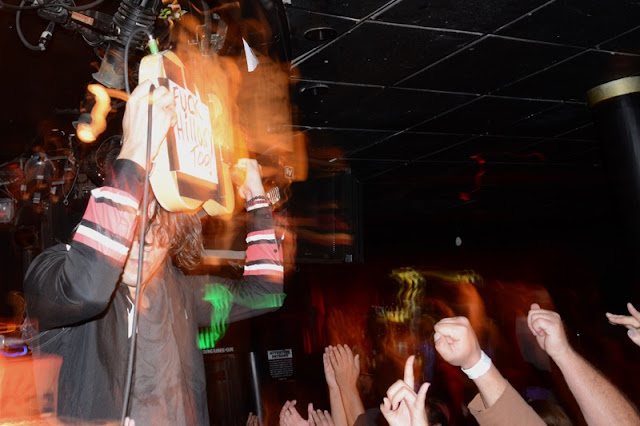 After thanking the openers (who I missed) and the Viper Room, Paz announced the last song by saying, "If you haven't moved yet, move something!" But that had not been a problem the entire show. People were all the way into it, but no more so than for the final song, "1968".  This was, appropriately, a show stopper. Each band member gave it their complete all, pounding the message into our collective minds and faces. "The more I love, the more I feel I can make it revolution (and the vice versa)!" was so inspiring, and yeah, we all pretty much felt like doing both by this point. 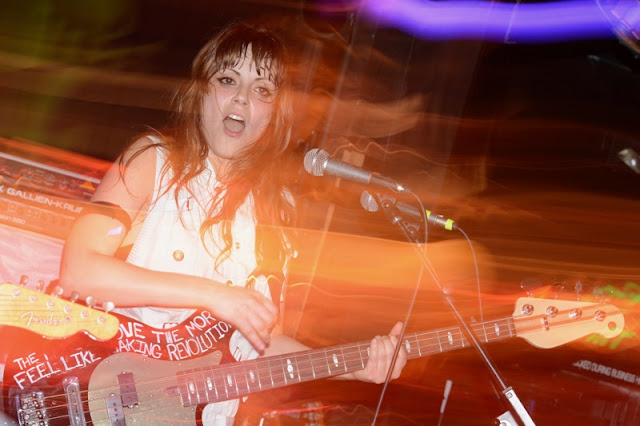 Pires handed off "The Peoples' Microphone" into the crowd, saying, "Whatever you want to say, say it!" How cool. Audience members passed the mic along, saying hurried, nervous things like, "I love you so much! Thank you!" and "The revolution is happening!" and again, "Fuck Hillary!" Paz threw herself into the crowd to join them, shouting, "People have the power!" and everyone echoed it back to her. It was a powerful, communal moment ... but once again, it's not a moment - it's a movement. 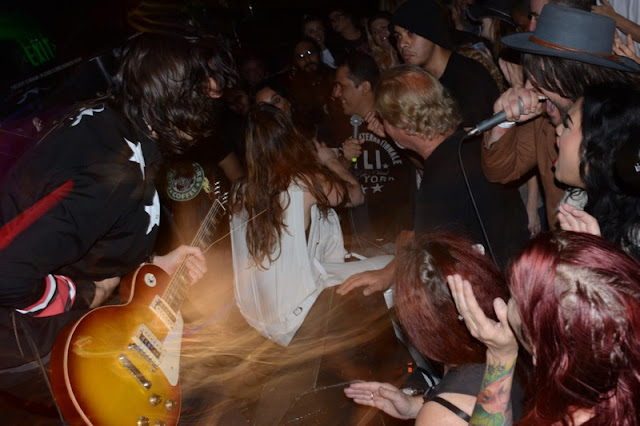 As Paz returned to the stage, Pires took her place in the crowd, playing a searing solo in the middle of all the beaming fan faces being melted off as they watched. Machines filled the stage with smoke for the fire of a finale, but it might actually have been real smoke, because it was incendiary. TLI may have actually set the Viper Room aflame with spontaneous combustion, it wasn't quite clear. Paz shouted, "Si se puede!" and the curtain closed. People were amped, and a crowd quickly formed around the band when they emerged, to offer their congratulations and adoration. TLI won't be playing here for a while, as they're off to tour all over the place. Trust me and get there when you get the chance. You too will be revolutionized, as The Last Internationale plays to remind you that WE the PEOPLE really do have the power, and when we come together like this, it's a beautiful thing.

Thank you to TLI for being a band with a sorely needed voice, singing what needs to be said. And We WILL reign.