Bernie Sanders In Santa Monica - Power To The People!

We here on the West side finally got our chance to hear Senator Bernie Sanders speak at a rally last night held at Santa Monica High School (Home of the Vikings!). Now, I've been to my share of political rallies, and none have been like this one. Not even Obama's. We decided to get there early to make sure we'd get in, and there was already a long line stretching from the 10 Freeway all the way past the Samo football field, around the corner and on up Pico - I heard it reached to Lincoln Boulevard! The line itself was a microcosm of America itself ... every ethnicity, every age, every single possible permutation of Bernie Sanders' face and name on clothes, buttons, hats, signs ... this crowd was absolutely "Feeling the Bern!" 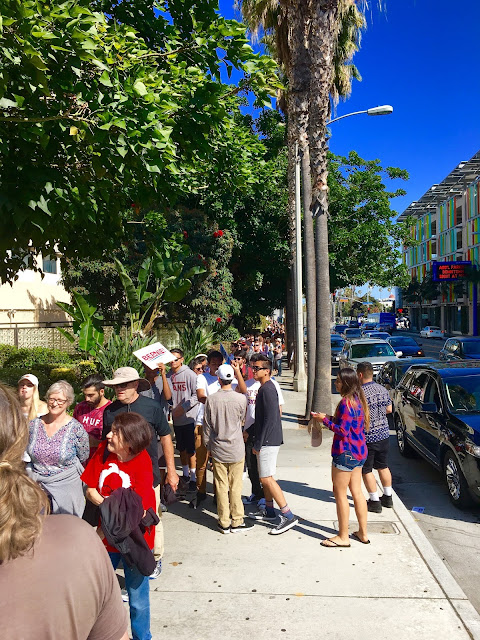 It was fun. It was like being on line to a rock concert, except no one was messed up from partying, and everyone was there, sure, to have a good time, but really, we were all there to save the World. It'd coming to that. We instantly made friends with our neighbors in line, and not one person thought we aren't going to see a President Sanders. Not one. Because, at this point, as one t-shirt read "Bernie Sanders, You're our only hope!" in a Star Wars font. That's no hyperbole. Hillary Clinton cannot beat Trump. Trump will ruin the World. It's actually a pretty simple choice. And every single person in attendance is making it ... and will be on the right side of history.

We waited in line until 4pm, when the doors opened. Then there was a Disneyland-style queue once inside, but even that was fun. Ben Cohen from Ben & Jerry's was there scooping up ice cream for the People. Kettle Chips was handing out "Democratic" chips - as everyone got some (so really more Socialist chips, which I prefer anyway), and friends shouted out from their spot in line. I was so happy to see a bunch of friends there without having talked about it, but the MOST happy to see my friends' daughter and her young teenager friends, as enthusiastic as I've ever seen them. Even more than for Bieber (though maybe not as much as the Hunger Games guy...). Encouraging for the future - there will still be some good people! 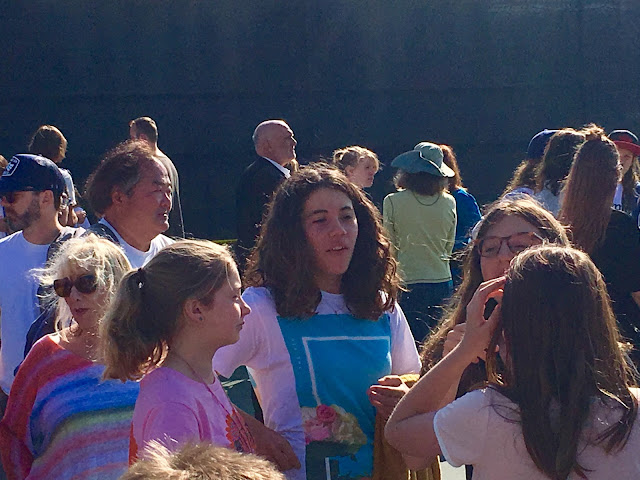 Good People. That's all there was at this event, as everyone to a person was kind, polite, helpful, considerate, and overall just lovely. It was packed and uncomfortable, with people on their feet for hours, some with babies, some with crutches, some hunched over from age, but everyone was smiling. Everyone was excited. I actually got a lump in my throat much more than once from all the quality examples of humanity I was seeing. I was so, so impressed with the behavior of every person I saw. Like THIS is how it's SUPPOSED to be. This is how I want our Country to BE. As Sanders himself later said, "This is the face of Democracy." How it was meant to be. 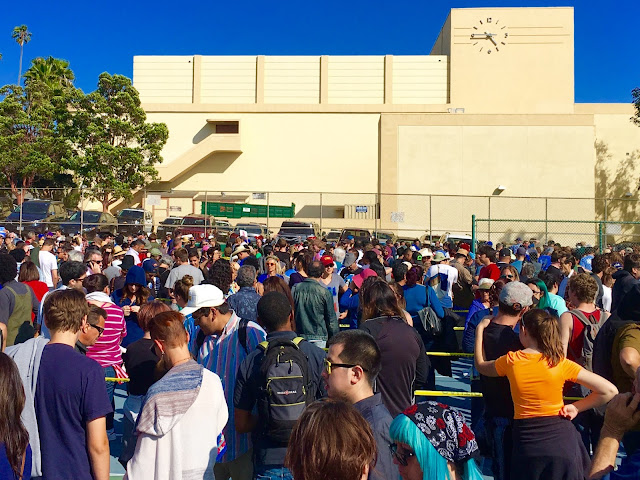 We finally got let in to the football field (after going through Security scanners and having to throw out our fruit? Like we'd throw it at Bernie? Never.) and it was a free for all to get as close to the stage as possible. People staked out their spots, and then sat listening to the great playlist (Pearl Jam/Muse/Bob Marley/Tracy Chapman/"Burn Baby Burn/Disco Inferno" - every song with "Revolution" in its title)and chatting with new friends. "Power To The People" blared out over the speakers, and that sentiment was perhaps never more truly felt. You could FEEL the power of everyone coming together in an effort to do what's right. All those cameras, all those cheers, all those shouts of approval for great things, and boisterous boos for the nightmares that have been going on in our country ... we absolutely have the POWER to change it all. You just had to look around to know that. 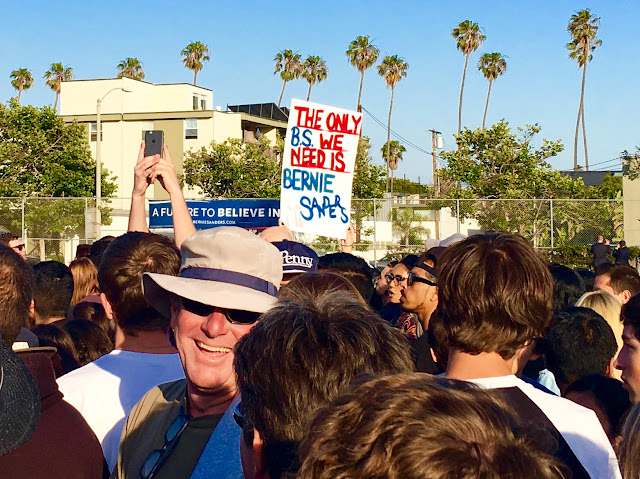 Sharpshooters were stationed on surrounding buildings, which was a bit creepy, but was balanced out by nearby residents hanging out of their windows and sitting on their apartment rooftops to see the action from up above. It must have looked awesome, because being down in the mix you couldn't really see the hugeness of the crowd - but you could sure feel it. A pretty bad singer (It's LA! You could get anyone!) sang a pretty bad song, and then Lili Haydn played an also pretty bad (Sad, because I really like her, but this was cringe-worthy) version of The Star Spangled Banner on her violin. It was mostly screechy feedback, but the crowd singing along helped some. Cenk Uygur of The Young Turks show (really the only place giving you the real news these days - looking at you and disappointed in you both NPR and Mother Jones - ugh) came out to rile up the crowd and speak truth to power. About how Sanders is the ONLY candidate left that makes any sense at all (I'm paraphrasing, but that was the gist. And the truth.) 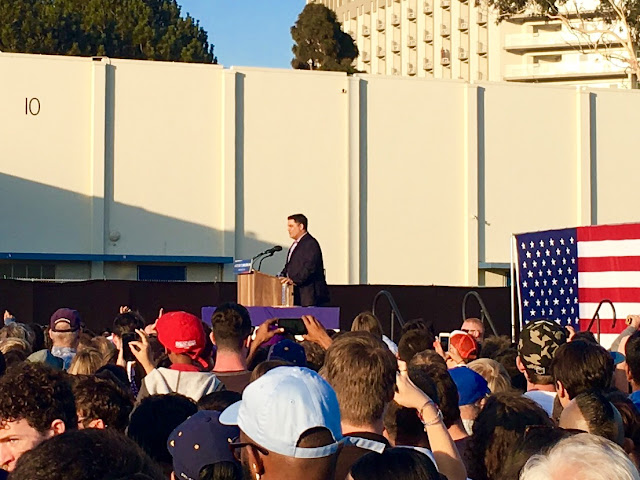 Great signs were held up throughout the crowd ... and I especially liked "TELEVISE THIS!" and "Bernie Or Bust!" held up right in front of the phalanx of camera crews from various news outlets (who finally caught on). Like, DO YOUR JOB, MEDIA! The Media actually received the most boos of the night, followed closely by Trump and Clinton - all well deserved. "Bern 1 For Bernie" was also well received by this California crowd (which later cheered loudly for Sanders' pro-marijuana stance). 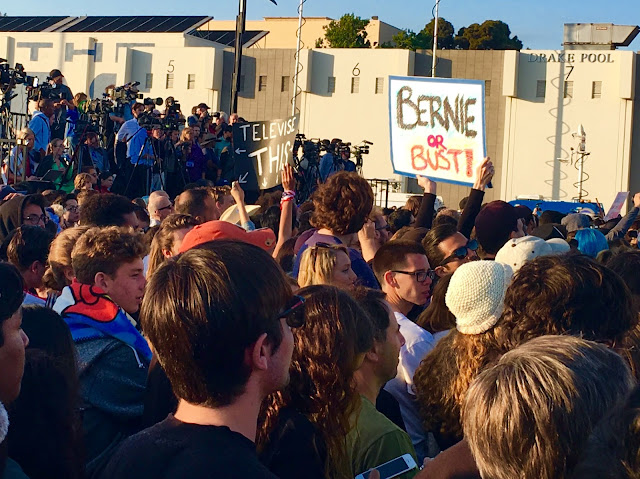 Rosario Dawson came out to speak on how our candidate is the real deal, and how this election is truly about the "Soul of our Country", which is the solid truth. Who do we want to be? I want to be GOOD. As the enthusiasm and excitement swelled, Dawson, having looked out at all the vastly diverse (in every way) faces all having come together for this cause, and truthfully said, "This is a MOVEMENT, not a moment." Amen. Awomen! 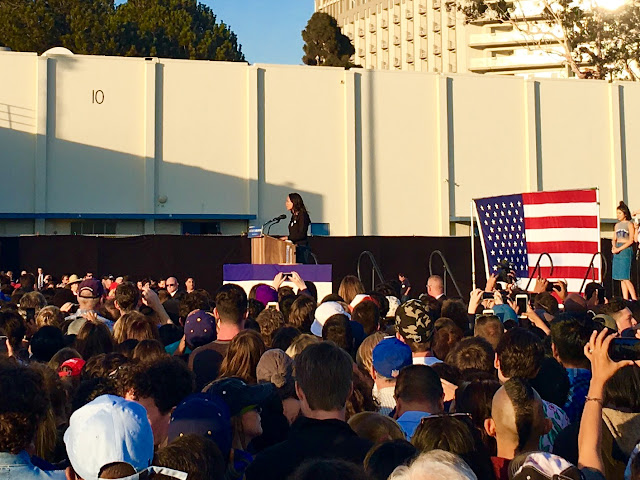 Dawson blushingly introduced the wonderful Dick Van Dyke (remind me to tell you a DVD joke sometime), who at 90 years old, is as spry and upbeat as you remember. He said, "Hi, I'm what's left of Dick Van Dyke" and the crowd roared with affection. He spoke about feeling his democracy disintegrating, and how he had to do something about it. He said he was sold on Sanders right away, because he had "taken off the Emperor's clothes". Van Dyke was very active in the civil rights struggle. and deservedly proud of that battle. It's up to us to now continue to fight for what's right - and we will. 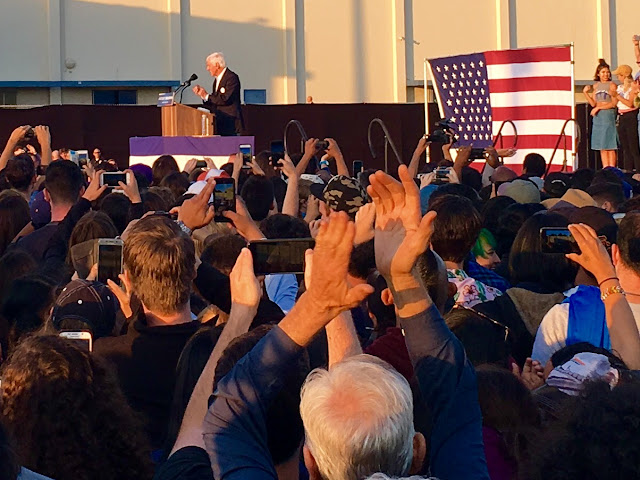 Van Dyke then introduced the crowd to Senator Sanders, saying, "I can feel the spirit here!", and the place went nuts. Everyone surged forward to get as close as possible, and the cheers were deafening. It was awesome. Every line Sanders spoke was met with either cheers of approval or roars of disgust, punctuated by "Bernie! Bernie Bernie!" chants whenever something was particularly right on. 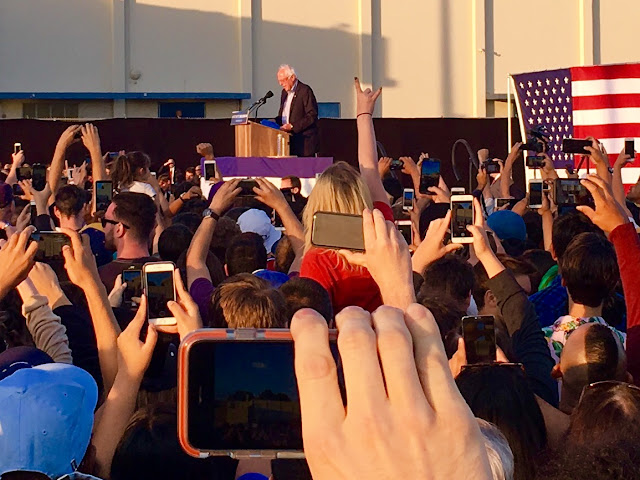 Sanders often begins a new thought with, "Brothers and Sisters ..." and I love that. Because we all are. We're all in this together. "This campaign is about bringing us together, not tearing us apart" - and it really is. The future of our Country is about justice, and making things right. That we will be remembered not for how many weapons we had or whatever, but how we treated the weakest members of our society. 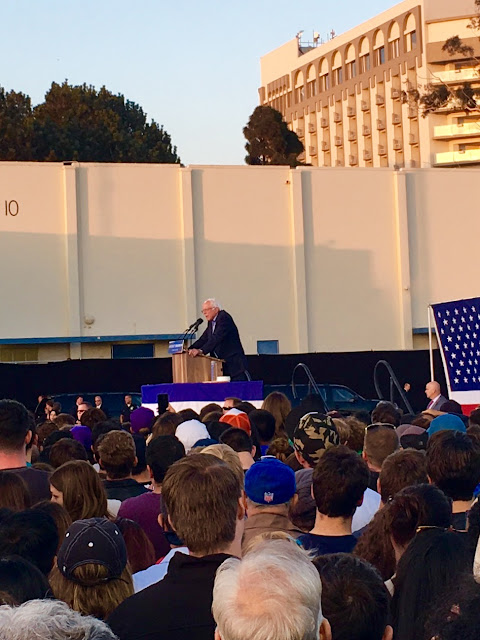 Well, it that's up to the people in this place (and it is), they will be well taken care of. Any time someone wanted to leave, the crowd parted respectfully. Anytime there was a statement made about how a certain group was being treated, say immigrants or Muslims or prisoners or the elderly or the mentally ill ... the loudest cheers came from the ones not a part of that group. A big beefy white guy in front of me was cheering loudest when Sanders was talking about uniting deported families. A young Asian girl yelled hardest when he was talking about taking care of the elderly. An elderly man in front of us had both fists raised when we were hearing about marijuana reform (which got massive cheers - "I want to smoke out with you, Bernie!"). People seemed to not be in it for themselves and their special interests, but for everyone's. And that is what I was by far the most impressed by. The concern for our fellow humans. It was incredibly touching, and I think every citizen of this country, and the World, would benefit from attending a Bernie rally and seeing what we really can be. It was nothing short of the REAL American Dream. With everyone on the same page ... Ahhhh. 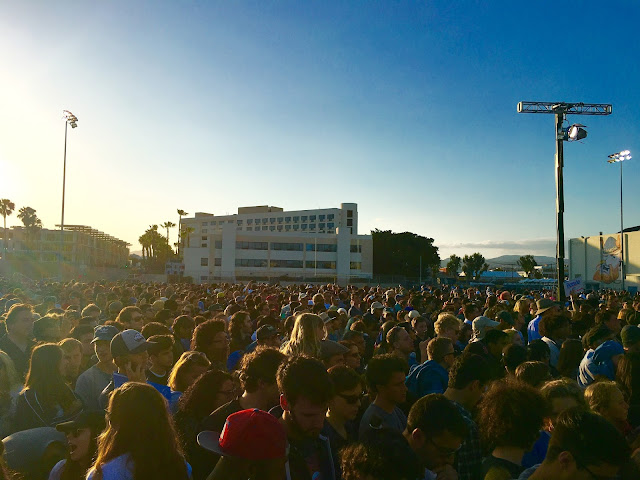 Sanders spoke to how he has had 8 million (!) individual donors to his campaign, the most in history. That alone defines this campaign - this LEADER - as different, as honorable, and as WHAT WE NEED. Someone who has the backs of the People who believe in him. And Sanders clearly does, in his every word and action for the last 40 years of consistent public service, fighting for justice. Fighting for PEOPLE. He's the Man. 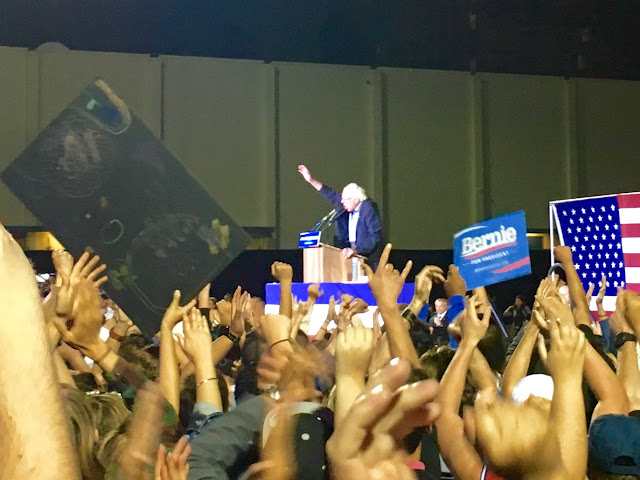 Sanders spoke quite a while, as the golden sun set on the crowd. Though you may have heard his talking points before, it never felt canned, it never felt pandering, it only felt REAL. The dude is smart and all the way up on every single issue, and makes you feel better about them all. As my friend Tom Morello is fond of saying, "Real change has always started from the bottom up" ... and it's happening. "Our diversity is our strength" - looking around this rally, truer words were never spoken. Together we are STRONG. Sanders closed by saying, "Love trumps hatred". THE bottom line.  People went crazy in agreement, yelling, whistling, jumping ... all knowing in our bones how right this all is. All while Bowie's "Starman" played. 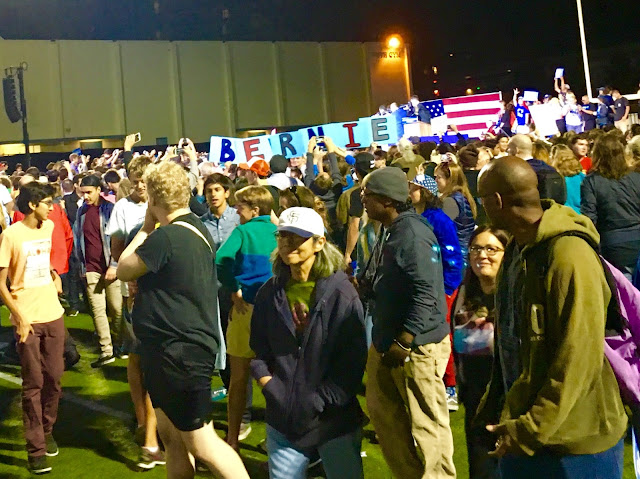 Sanders went through the crowd, shaking hands and grinning at how great it was. We didn't even get close because it was a madhouse, but no matter. A spontaneous dance party had started up in the middle of the football field, with strangers joining in and dancing with abandon. I got another lump in my throat, because, really. This is how we want to be, as a Country, and as a People. THIS is what our Founding Fathers intended for this grand American experiment (this is actually probably even better than what those guys came up wtih)  ... and we can still get it right. 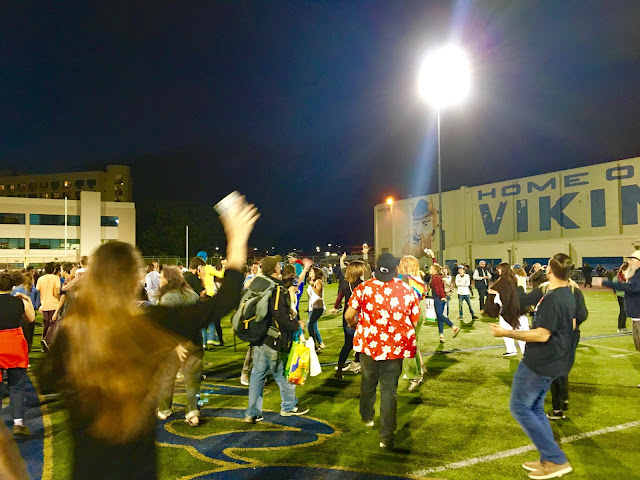 POWER TO THE PEOPLE!!!

Please vote for Bernie Sanders in California on June 7th.

Please vote for Bernie Sanders for President in November.