Venice Art Walk 2016 - On The Last Day Of The Roosterfish

The final installment of Venice Art Week 2016 was the Venice Art Walk, a benefit for the Venice Family Clinic. It was another absolutely gorgeous day here in Venice, and the only problem was how to get in all the fun that was on offer for the day. 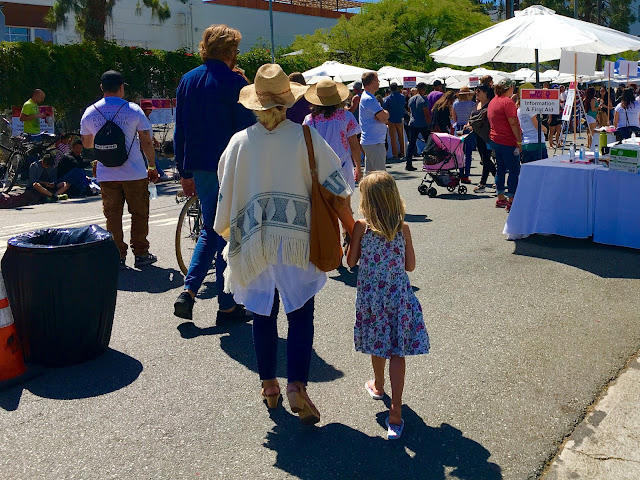 The Venice Art Walk is the fancier, spendier option, which is fine because it helps our neighbors get access to health care and that's huge, but the headquarters of the whole affair is at the Google campus, and we all have mixed feelings about that. Of course. 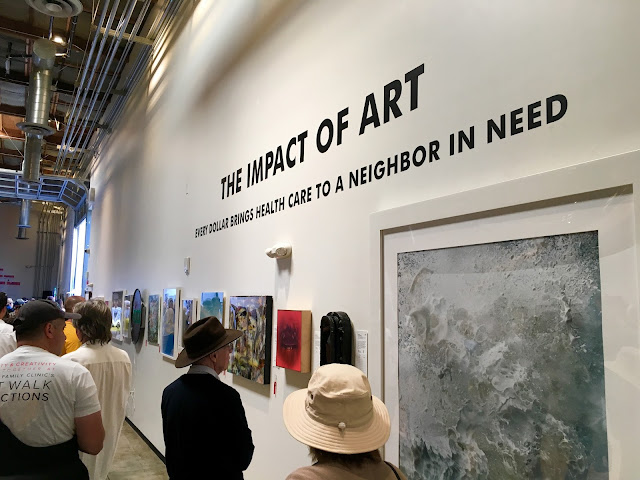 We got a way late start on this beautiful Sunday, because the full moon night before had been a little nuts. Many of the open studio tour stops were repeats of the ArtBlock and the Art Crawl (both free), so I didn't stress too hard about hitting all of them (which wouldn't even be physically possible anyway), and went into cruising mode. 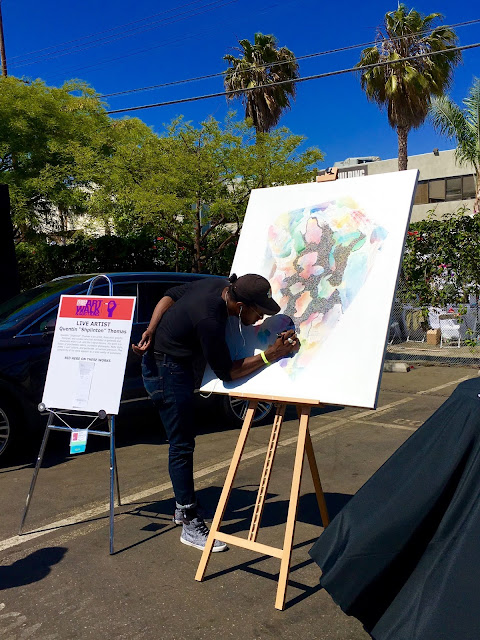 The streets outside of Google were full of art enthusiasts getting signed up for the Walk, and enjoying the live painting and people watching going on out there. I always dig live painting, really seeing someone's process and watching a piece of art come alive before your eyes. It's such a private process, that I really appreciate the bravery and coolness of these artists letting you watch. 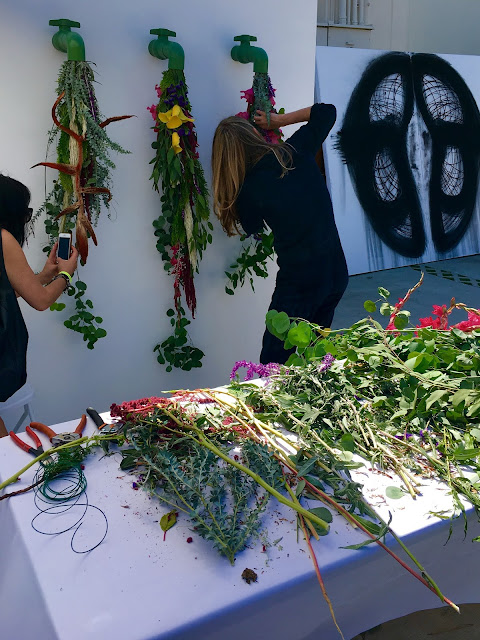 Inside Google's halls was where the silent auction took place (and we all still miss it being at Westminster School - a public institution), and while there are many wonderful pieces of art to bid on to benefit the Clinic, the focus isn't really on Venice artists, though several are represented. 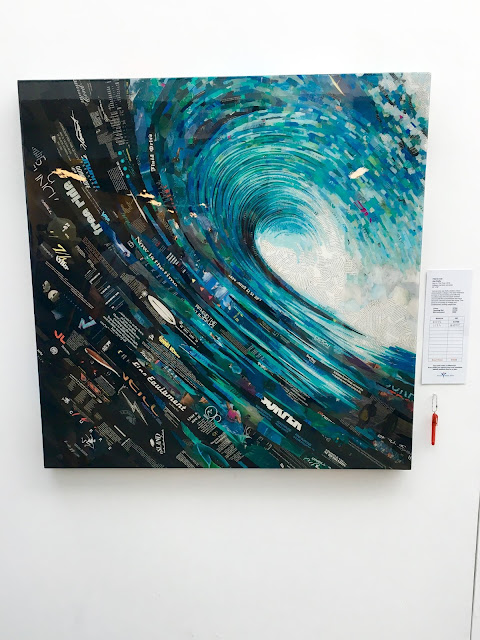 This show is more for any artists, and probably the ones that can fetch the highest bids. 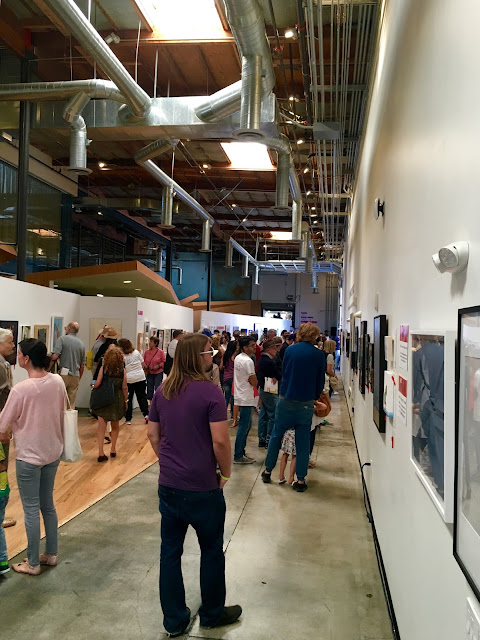 I'm always drawn to the surfy or skate kind of pieces, and Venice itself is a dominant subject in many of the works. There was a very cool Venice sign on metal that changed colors as you watched, kind of like the pylon things at LAX. Very cool. 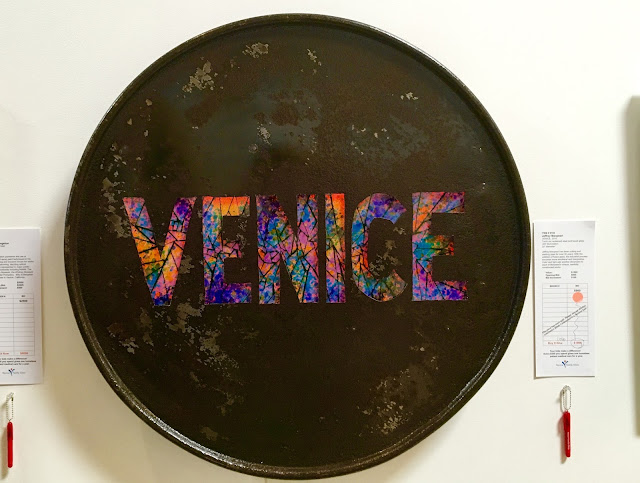 I really liked the piece by Timothy Williams that was done inside of an old metal port hole window. Original, colorful, all the way up my alley. 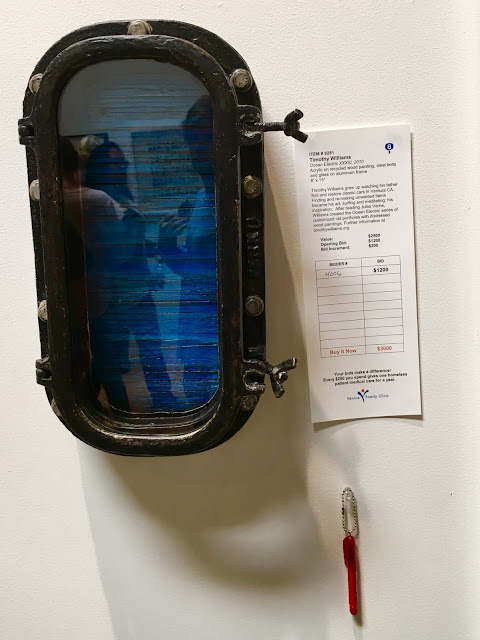 It was fun to see pieces by friends or artists we know from around town, and it was great to see that they were all fetching pretty pennies for the health care of other friends and neighbors. I really liked the piece by Brandon Boyd, who creates all sorts of wonderful art when he isn't out on the road with his band Incubus. 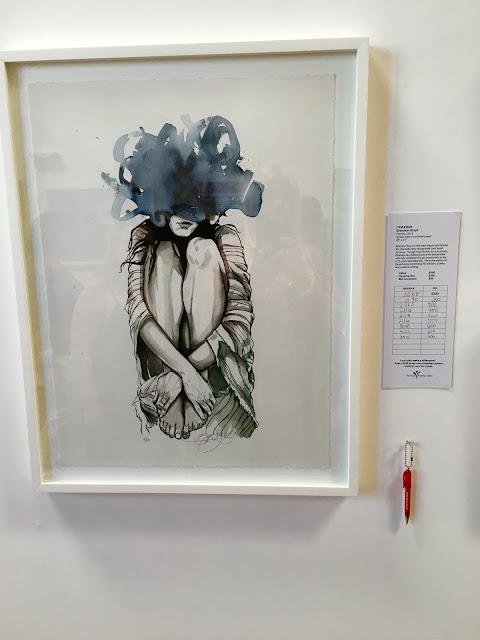 As it goes at all of these events, really the best part is running into the people you know and love, in the name of art. I saw fun friends all day long, and only wished the day could be longer so we could all enjoy both each other and the art without fear of missing out on anything. My friend, KC Mancebo, is one of the organizers of the whole thing, and it was great to see her, and also how her hard work was being appreciated by everyone in attendance. 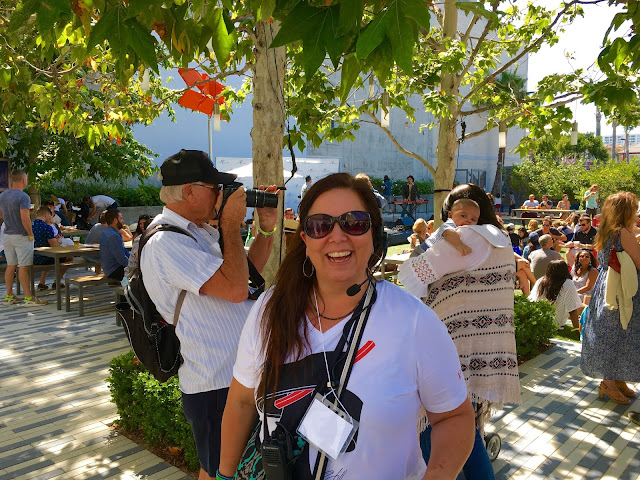 Bands played outside in the Google courtyard while people sat on the grass in the sunshine. A beer garden was set up and generally people were just loving it all. I wanted to just sit there and bask in it all, but time was a-wasting. AND I thought the whole thing went until 6 pm, but the studio tours ended at 4. Oops. 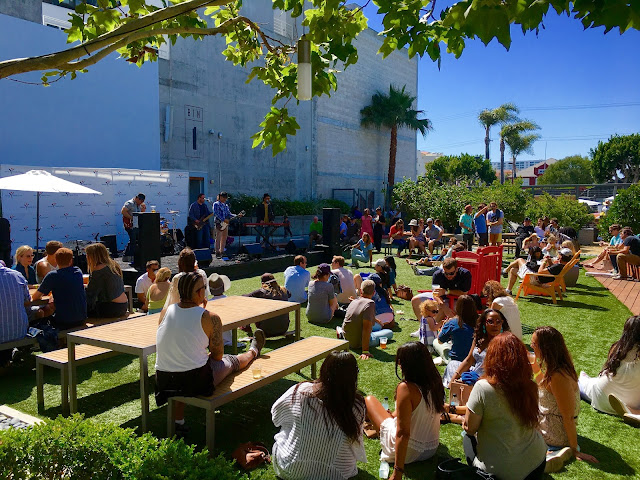 We sped by all the Vernon and Sunset stops, because we'd just seen them all the week before, but poked our heads in to the Temple Of Mediclaytion again to say hi and see our friend Lacey already mastering the pottery craft after just a couple of lessons. Skills! 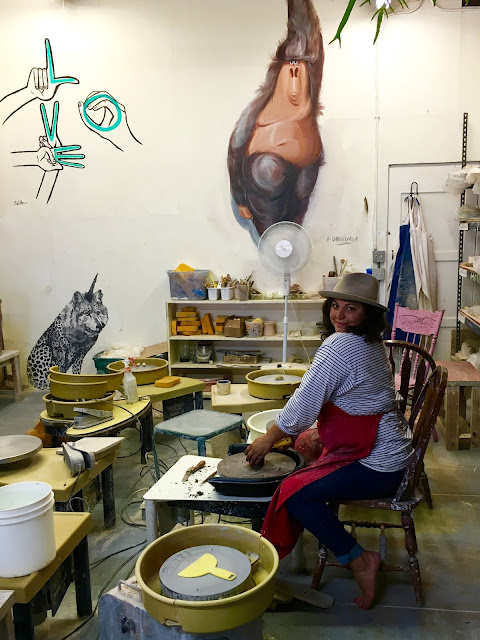 I was happy to see Attaway again out on the streets, and I also love it when artists just set up their own studio stop right there on the sidewalk. Just because you're not known or hyped or whatever enough to be asked to hang inside the Google walls, doesn't mean you're not an artist or that people wouldn't like to see YOUR work as well. I like the spirit behind that, and was pleased to see many people stopping to talk and look at the work of people that did this. Art is everywhere! 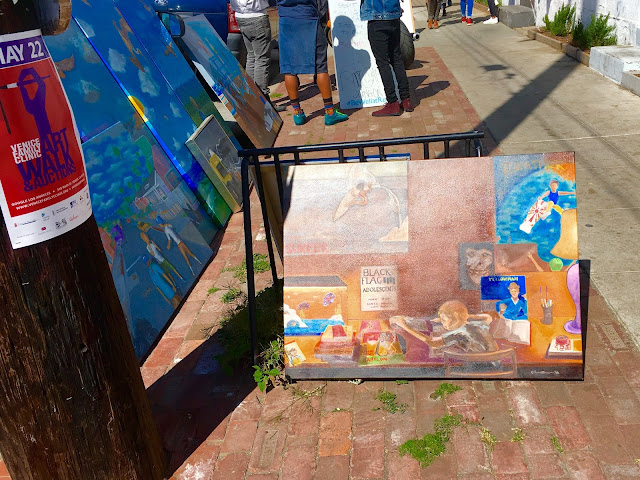 After stopping to talk to some more friends and more artists, we found out that the studio tours ended at 4, and it was now like 4:15. I know that some places like to close up so they can go out and explore themselves, but we decided to go for it at a couple of places. And I'm so glad we did. I'd never been to the home of my friends, Greg Falk and Tanja Skala before, and WOW. They built their urban retreat all by themselves, a true creativity compound, and it's extra impressive. As is their work. Skala had a performance piece (that we missed, sadly) called Until We Are All Free, None Of Us Are Free, and though we missed it, I could feel the weight of it just by being in the room. It was a concrete room with Middle Eastern-sounding music playing, and there had been a woman wrapped entirely in black yarn standing there for three hours. Onlookers would unravel some yarn, all the way until she was fully exposed (Free!), when she did a dance performance. I'm so bummed I missed it, because I could see talking to Skala how truly moving it had been. 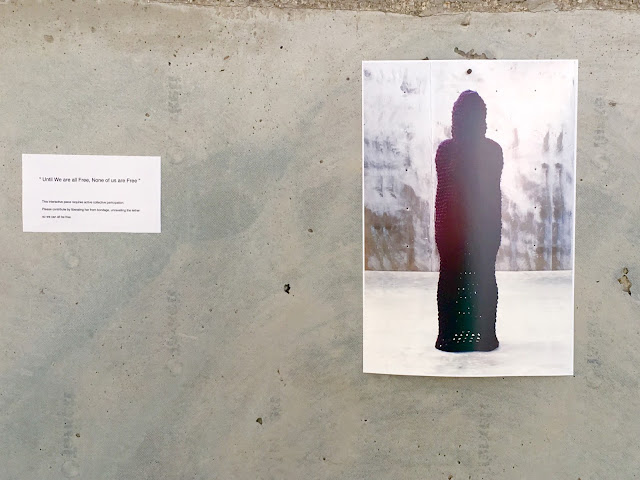 Falk shared his very cool giant studio space with us, and told us how he'd finally found companion "Lost Dog" signs - both Lost and Found for the same dog - and how it had happened at Abbot's Habit - where we pretty much all know each other from. There is so much interesting stuff to look at there in the studio that you could spend a whole day, especially if they're there explaining things to you. 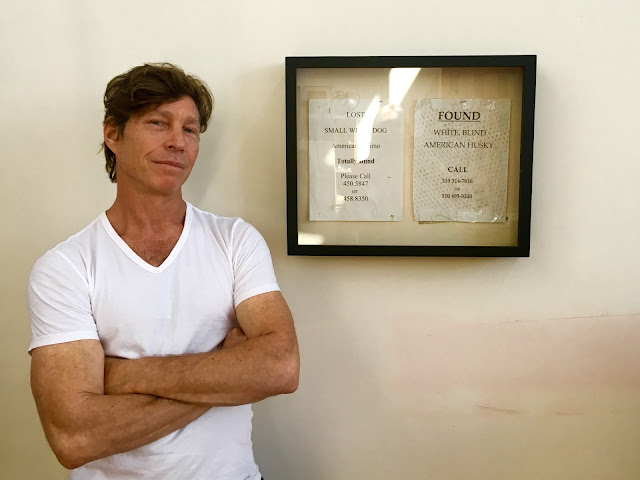 Downstairs they had created a "Confessional" where you could confess your sins and have them shredded up. There was also a bottle of holy water filtered through a copy of Darwin's Origin Of The Species, where you wound up with pure water. The whole place was a true highlight, and I'm so glad we took the chance of peeking in off of the alley. 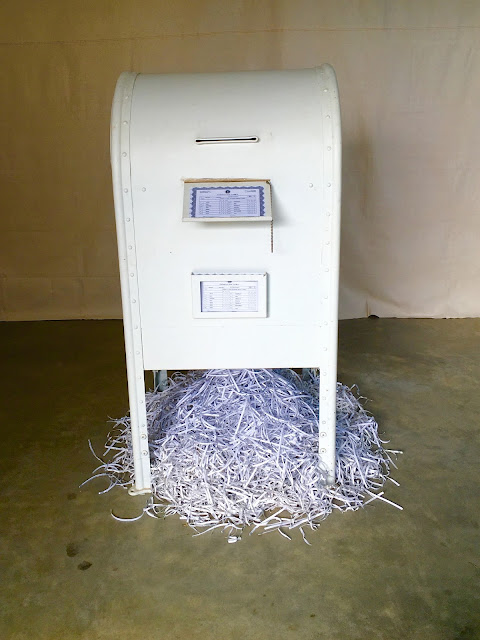 We zipped over to C.A.V.E. Gallery to see their group show for their 8th Anniversary, where we got to see more work from Bisco Smith, among a bunch of others, plus Venice Duck beer on tap. Always a good time. And you know what was so great on this day ... People kept driving by that I knew, and they'd yell, "I love you!" instead of "Hi!" It was in the air. 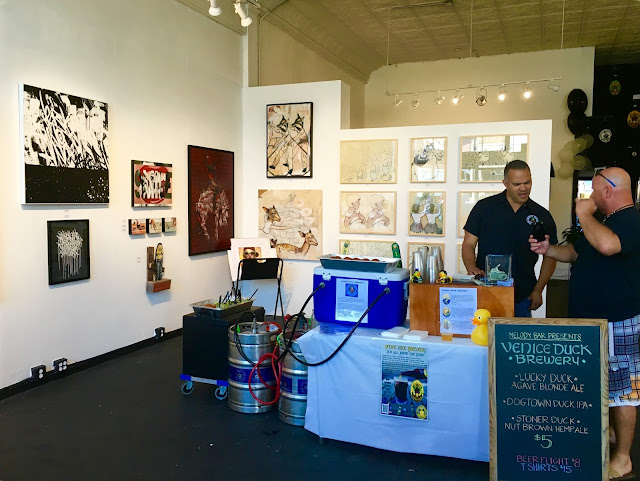 Across the street we saw the photographic work of Marian Crostic there in a sort of hidden house on Abbot Kinney. I liked her work a lot, probably because most of it featured Venice and the beach. Really nice stuff. 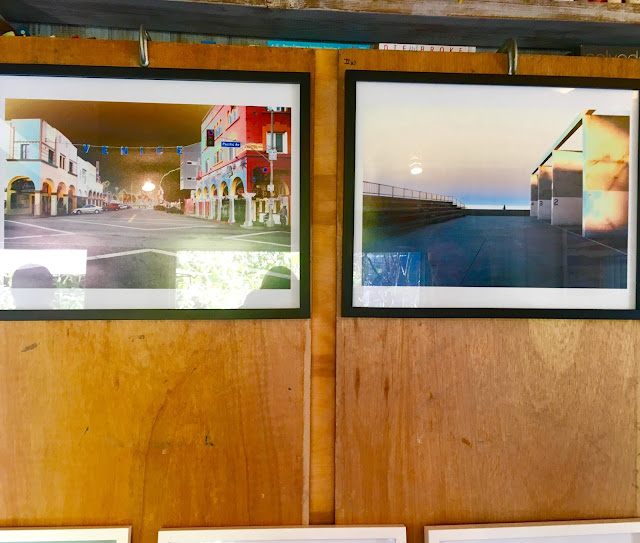 Now we were getting messages to head on over to The Roosterfish, because it was the very last day of it being open. Ever. It's just so sad. We went over but the line was almost around the block and we hadn't yet eaten. That would not end well, so we took a breather to BBQ with friends (and see the travesty of a Prince tribute on the Billboard Awards - ugh) and rest our feet for a spell. 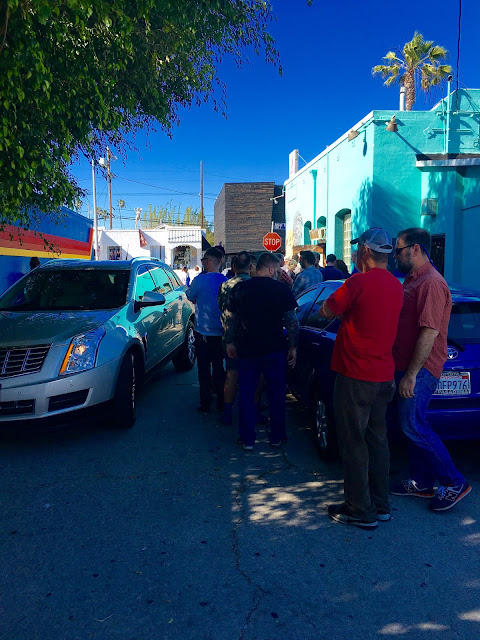 Once fed, there was no choice but to face it, and it was back over to The Roosterfish for one more stiff drink with our friends in this beloved Venice landmark. It was SAD and dumb and wrong ... and FUN one more time.  It was late, so folks were fairly sloppy by this point, but the love was felt strongly felt.
The place was packed, and it didn't really feel that much like a gay bar anymore, because everyone in town was there to celebrate the good memories had within those walls, whatever your sexual preference might be. There was a rumor that the porn-y men's bathroom ceiling was going to be donated to LACMA or MOMA or something, and it really should be. This place was HISTORIC. And now it's gone.

The almost full moon shone down on everyone out there on the patio (that stayed open late for this last night), and while everyone was certainly enjoying ourselves, there was definitely the pall of sadness over it all, that yet another Venice institution will disappear - for what is rumored to be another "Start up" company to take over the space. If that's true, good luck to them, because no one is happy about this, and I can't imagine wanting to be the ones that got rid of The 'Fish. 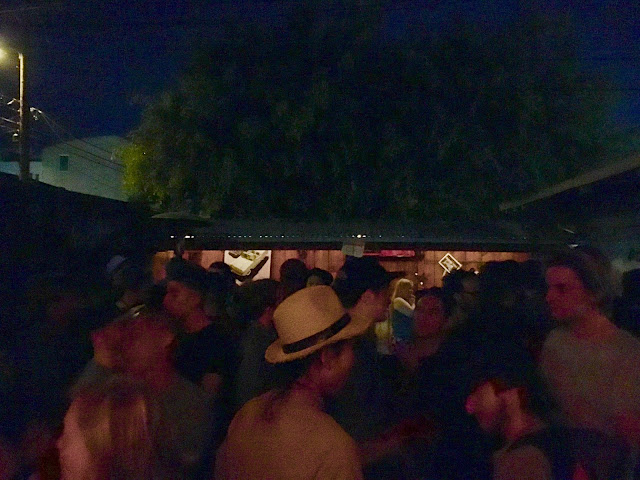 People were upset. People were drunk. People were sad, but also kind of happy that we had ever had this place in Venice in the first place - at least that's the best way to deal with it, or you'll just be mad all day. It was nice that the last day was also on the day of the Art Walk, so people that were just visiting Venice could see all the commotion and know that this was somewhere special. And that we're all trying so hard to KEEP it special, and things like the Art Walk help with that. The doors closed on The Roosterfish for good last night, but not before more good memories were made within its walls. Farewell, Fish. We loved you. 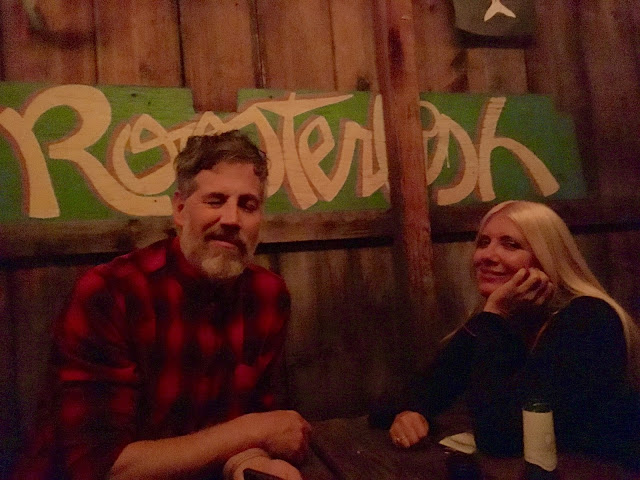 If I had to choose a winner of Art Week, I'd go with ArtBlock, simply because it's so very much by and for the People of Venice, and open to all for free. The truth, however, is that we're ALL Winners because we just had a whole week in our town that was all about Art! With all the crushing losses in our town and in the world, that's really something. 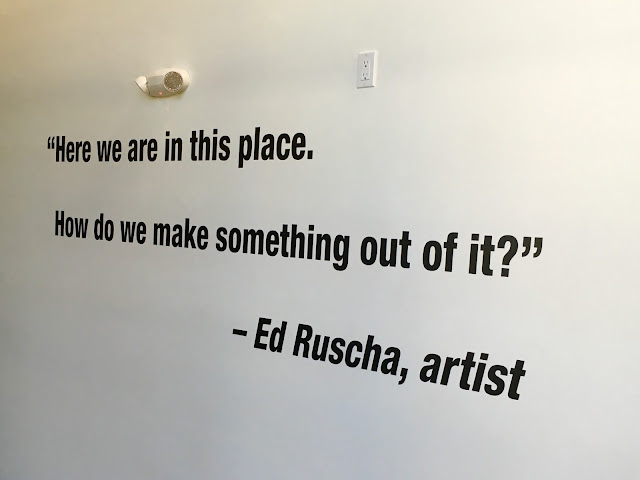 Thank you - as ever - to all the wonderful people that come together to make these things happen for our community. With all of your efforts and spirit, I have no doubt that Venice will always remain special.