You know when all the fun stuff happens on the same day? Well, that was this Memorial Weekend's Sunday ... jam packed, with decisions to be made. The good news was that all of the options were extra fun, so you really couldn't go wrong. One of the highlights of last year's same weekend was the block party happening on Victoria Avenue, so that had to be a top priority this time around for sure. 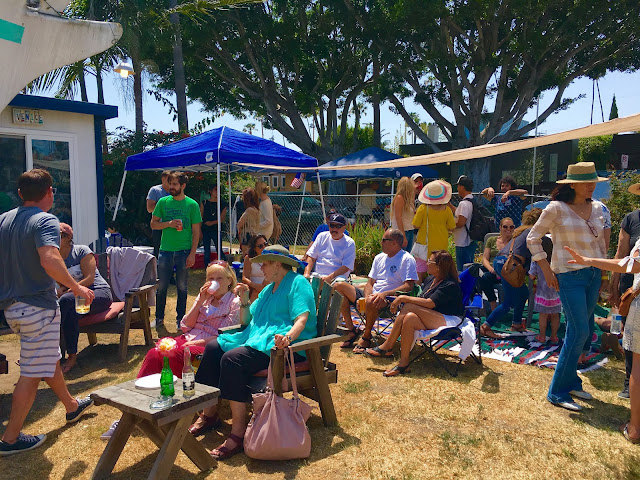 It was another beautiful, perfect day and people were in the mood for a party, and to kick off this Summer season, after a fairly tough, emotional year so far for seemingly everyone. It was time to celebrate all of the good that this country has to offer, and what better way to do that than with a day chock full of Americana music!

I could hear the music already when I walked down the street, and when I got to the headquarters at my friend Karen's house, I saw that I was just barely in time to catch the Sean Vercos Experience. Young Sean is Karen's next door neighbor, and he's 12. Years old. It's no mistake that his band (made up of his Dad and friends) is called the Experience, as young Vercos is a Hendrixian-style shredder on his electric guitar, and never fails to floor all of us grownups. I already love this kid, but when he threw down the guitar solo on "Purple Rain" (perfectly), he really sealed the deal. It's going to be so fun to watch this guy grow up and blow minds, for real. 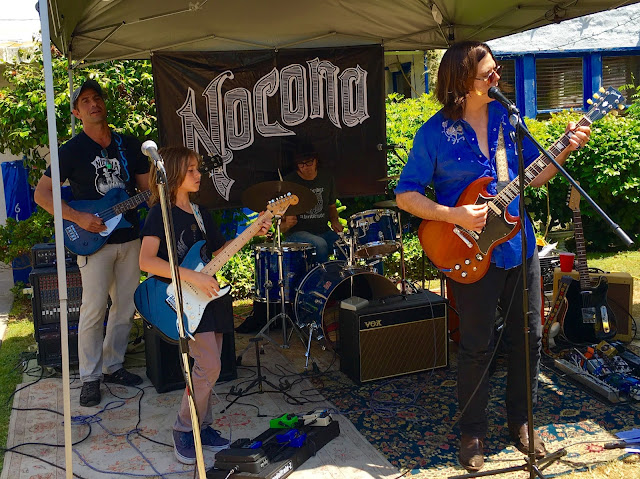 No sooner had I arrived than it was time - as tradition dictates - for Karen's Jell-O shots. No one had a problem with that at all, and BAM! The party was on. 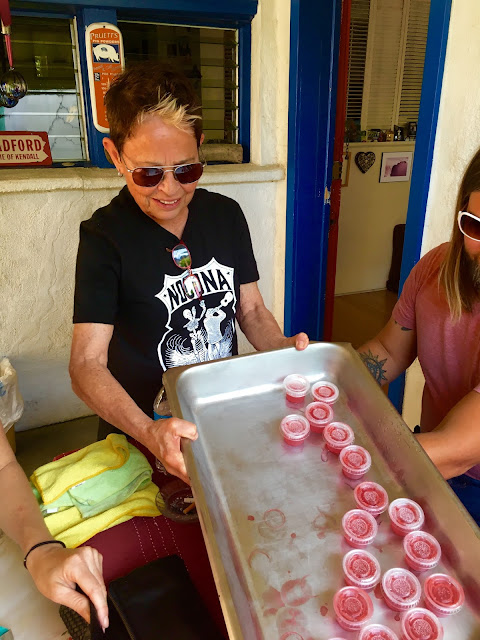 The Victoria Avenue neighbors are a wonderful bunch of folks, and my favorite part of the day is always just looking around and seeing the fantastic mix of young and old, every race, gangster or grandma, brand new friends and old friends forever, all having a blast together in the sunshine in the town we love. It's completely awesome. 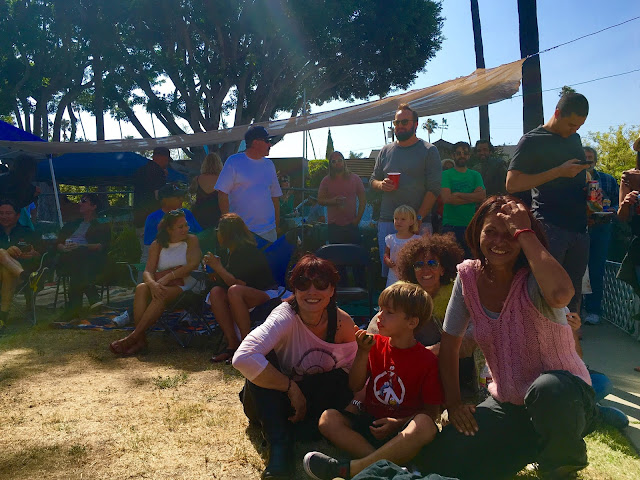 I was "backstage" for a bit, catching up with the legends Karen and Mo Cotter, and all we kept talking about is how lucky we are. Lucky that everyone is so cool, lucky that we've known each other for so long, and lucky basically just to be alive and still here together. Celebrate! 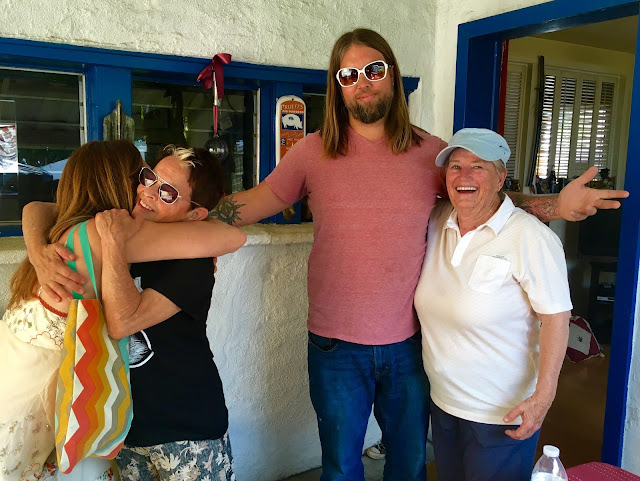 The music was excellent, and distracting me from our chats, so I had to go see it from the front. Patrolled By Radar was laying it DOWN, and they instantly got put on my list of favorite local bands. REALLY good, and singer, Jay Souza, was wearing a "Bernie" shirt too. Solid. 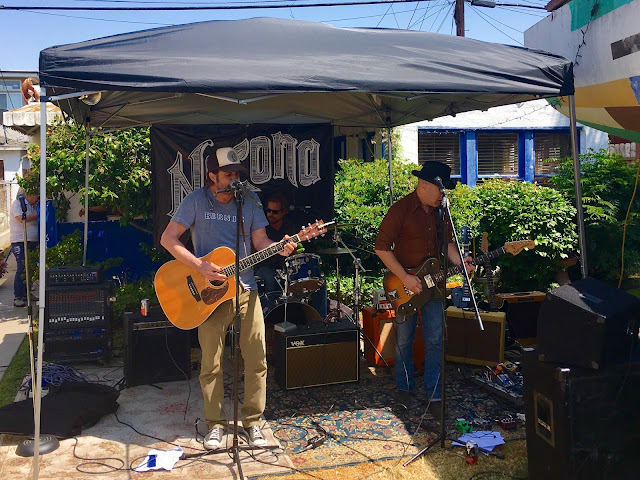 The Victoria crew had generously provided a taco stand from Berdo's Tacos, where Albert Martinez kept the revelers happy and fed for hours. I can strongly recommend the El Pastor as maybe the best I've ever had. Once again, this was a no permit party - Venice style - and the taco stand was set up right in the street, along with the other food tables and coolers and stuff. No problem whatsoever ... you only had to look out for the renegade children that were joy-riding around in a little electric car like baby Thelma and Louise's. It was impressive. 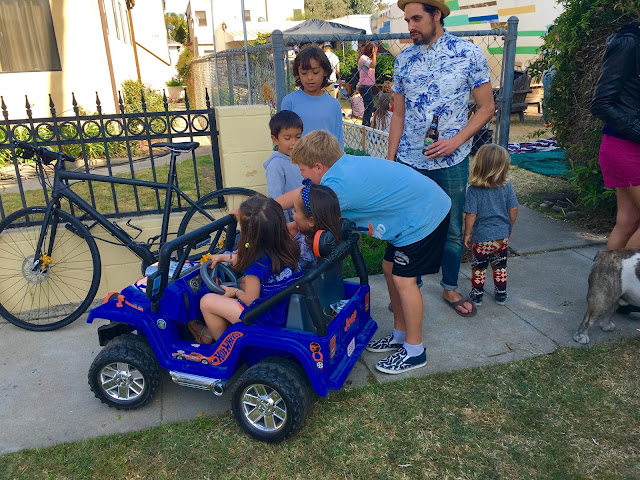 Nocona hit the stage next and transformed the yard into a honky tonk dance party, where even the oldest party-goers were toe-tapping and moving to the beat. I love Nocona, and as I was listening, I once again just got that very tangible "We're so lucky" feeling. World class music, icy cold beers, the greatest people ... without ever leaving the neighborhood! It's truly the best. 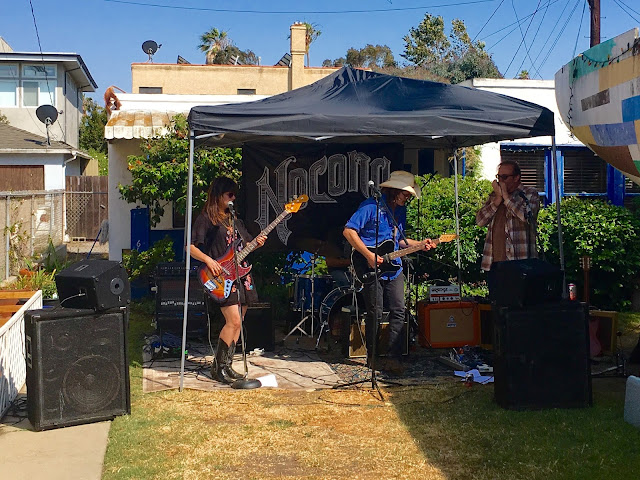 But then we had to leave the neighborhood, because another group of top shelf friends were playing over at The Cinema Bar, and that could not be missed (though a bunch of good bands were missed on Victoria, making me think we all have to coordinate our watches next year so we cal all see everything!) We got to the Cinema right as our dear Lacey Kay Cowden was beguiling the tiny Cinema room with her gorgeous, soulful tunes as the sun streamed in from outside. If you weren't already a fan, you were now. 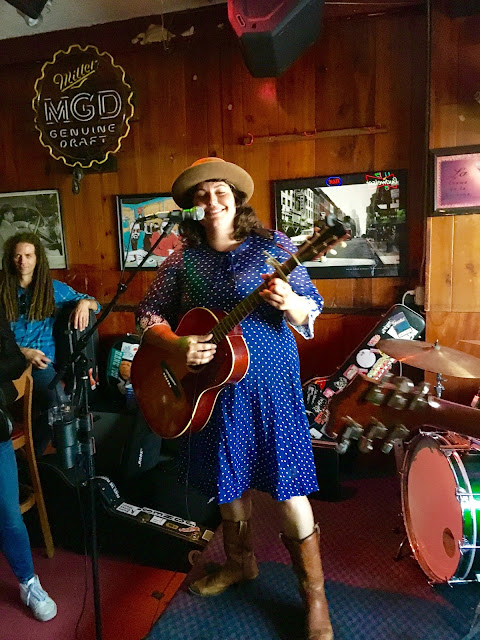 The place was packed solid, and as I made my way out to the back patio, it was one big embrace after another, as the day only got better. Out back there was a crawfish boil in full swing, helmed by Chef Brian Dunsmoor from Hatchet Hall. 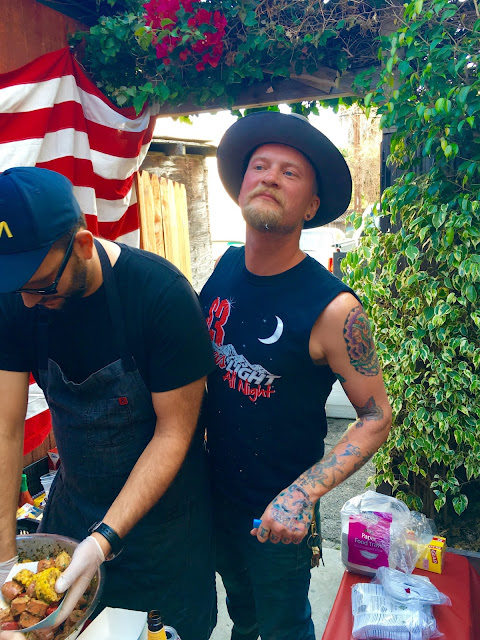 People lined up to get themselves a basket of crawfish, corn, potatoes, and sausage all in that garlic butter spicy sauce that throws any kind of manners out the window. You just slurp and suck and make a total mess - and love every minute of it. 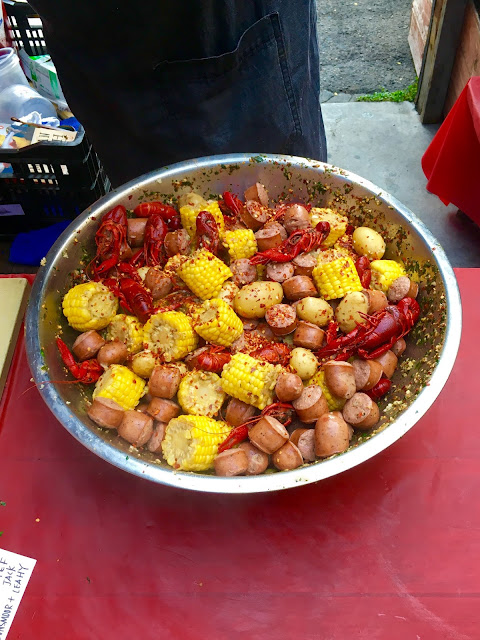 The alley became a spot to get some fresh air after being squeezed tight in with all your friends, and that's nice, but only for so long because Paul Chesne was up next. And Chesne is the best. 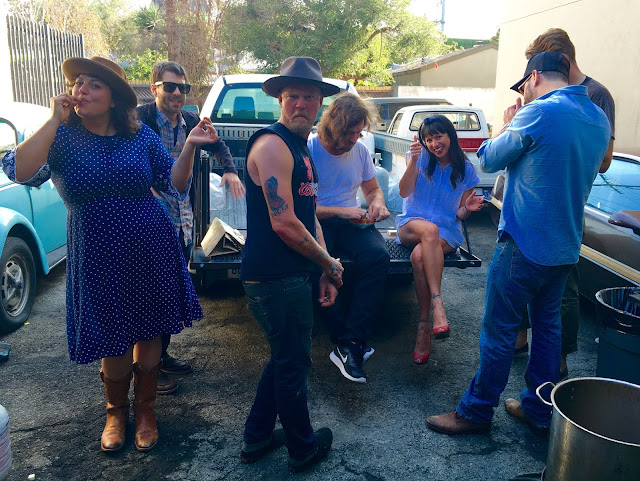 I don't even remember which songs Chesne and his rock solid band played, but I know the whole place was dancing. I looked around to see that some of the other folks from the Victoria block party had also made their way over to Sepulveda, and now the parties were merging. Excellent. 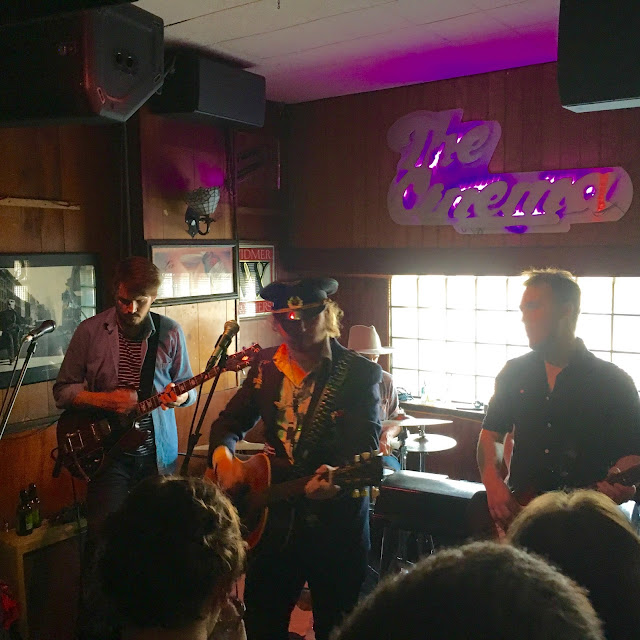 A breather out back after Chesne wasn't really a breather, because DJ Bright Moments (Paddy Wilkins) was back there spinning, and every song had us singing and dancing along (it may or may not surprise you that the big crowd pleasers were "I've Had The Time Of My Life" from Dirty Dancing and "All Night Long" from Lionel Richie ... tipping the hand that perhaps we'd all been teens in the later '80's). It was an absolute blast.

Back inside we went to get down to Matt Ellis and his band, sounding as great as ever on that little stage - so tiny that bassist Dustin Bookatz just played from right in the crowd. Vavine Tahapehi joined her husband for a couple tunes, and as we all sang along and loved each other, there again was that LUCKY feeling. And the AWARENESS of it. 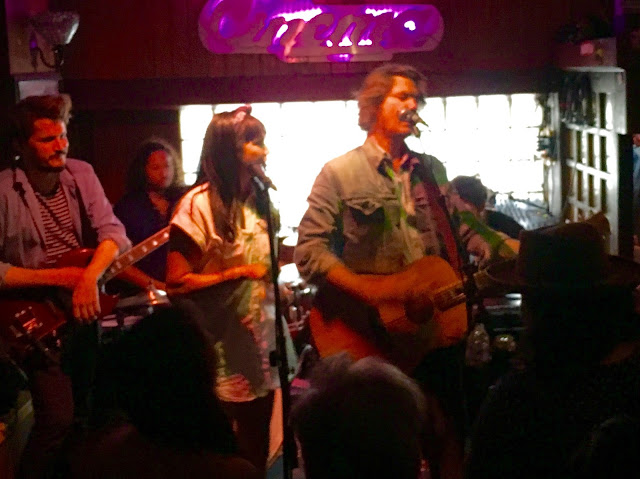 After the bands all finished, everyone danced and sang some more out on the patio until we got the boot. The party adjourned and several of us met up to sing even more around a campfire. As the stars came out and everyone started to get sloppy, I gave a moment of thought to what the day was about. Yes, Memorial Day is about remembering our fallen Veterans of wars, but it's also about remembering what they fought for. I've known plenty of Veterans (I was thinking mostly of Tomas Young on this particular day), and none of them signed up to fight for oil rights or to prop up foreign dictators who play along with the American agenda. No, they all signed up to protect US, and days like we had on Sunday. Friends and families gathered together to celebrate each other, and to celebrate Freedom. To break bread together and listen to the music that defines who we are and what we're about. To live together, in unity, with justice for ALL. THAT is what it's about. And that is what WE were about on this perfectly wonderful day under the Stars and Stripes. FREEDOM.


THANK YOU to every single person involved, whether you organized it or attended it, it was great because of you being there.
Posted by CJ Gronner at 2:41 PM