Venice Vs. Snapchat - Communities, Not Corporations!

Snapchat, the awful corporation currently trying to ruin Venice, is poised to go public with their IPO tomorrow, and our Venice community had something to say about it. A hastily planned protest went down yesterday on Market Street right out in front of Snap Inc's headquarters to let them know we're not at all pleased. 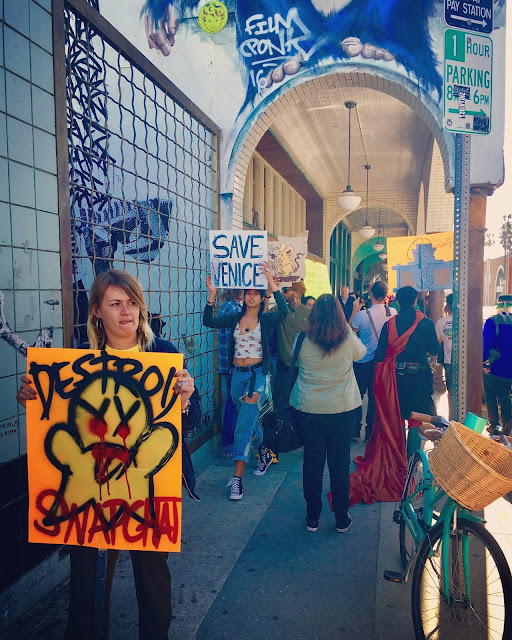 Venice locals and concerned members of our community gathered on Pacific and Market, armed with signs letting these tech jerks know exactly what we're thinking. 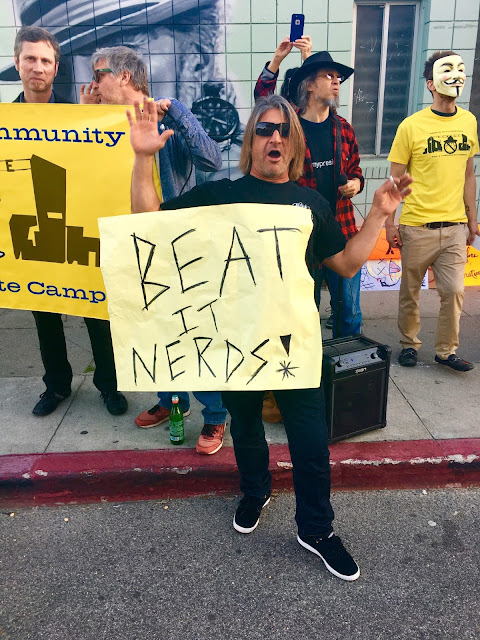 There was a pretty good turnout considering it was a Tuesday (Fat Tuesday, at that!) in the afternoon, and it was encouraging to see all the familiar faces we've known and loved around Venice for years come together in the name of preserving our bohemian beach town that we all deeply love. We live here because it's different - and we like that. 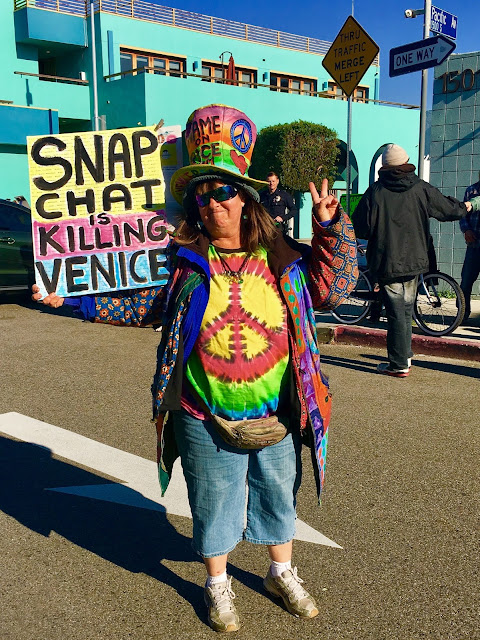 As citizens marched up and down the sidewalks in front of Snapchat, they chanted hilarious (and true) rhymes and waved their signs ("Evan Spiegel is the Trump of Venice!) for the news outlets gathered. Protest organizer, Jim Robb, was interviewed by USA Today here, letting the whole country know that we think they're lame if they choose to invest in a company that cares so little about one of the coolest places on Earth. 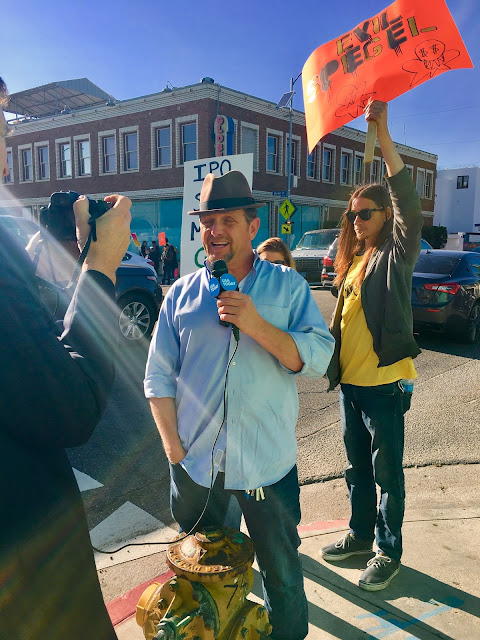 I added that the app itself is so lame that no respectable adult should be using that thing for flower crowns and animal faces, it's never made a profit, and basically, it's a stupid fad that we're not willing to give up on our town for. If you've ever enjoyed a visit to Venice, you shouldn't be supporting it or investing in it either. Period. 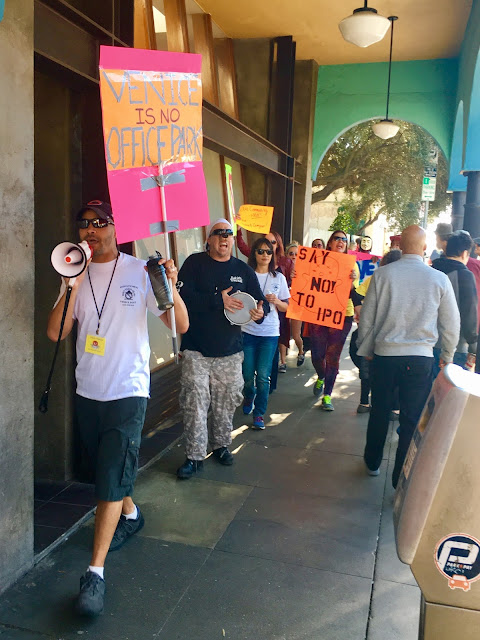 It was easy to tell who the Snapchat workers were - that dared to come outside, that is. They all wear the boring, Millenial tech worker bland uniform of neutrals with zero character. No flair. No personality at all. A couple of the corporate drone douchebags walked through the protest actually Snapchatting it, drawing our jeers and ire. The less brave peeked out the office windows and took pictures. It's all just SO not Venice, that it's hard to believe THEY even want to be here. They simply do not fit in. Nor do they even try. Why be someplace where you're so extremely unwanted? That's never a good feeling. The overarching sentiment of the day was really just Go Away, Snapchat! ASAP. 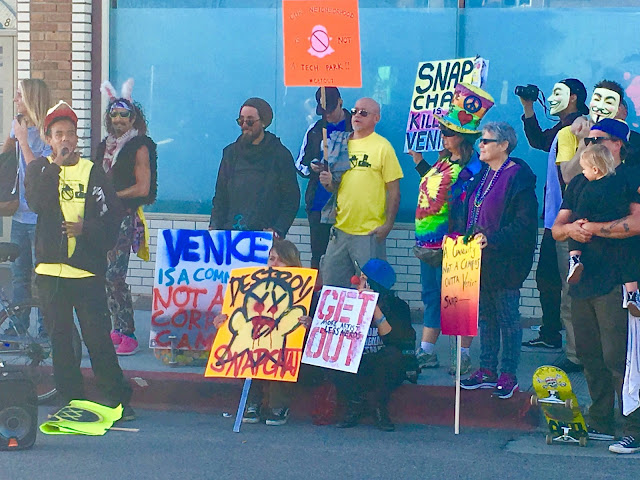 With the Snap, Inc. IPO looming tomorrow, it stand to make this dumb company even more money, which would allow them to gobble up even more of Venice, displacing all the wonderful originality that made Venice a destination to begin with. Money and greed running all the cool out of town to create a corporate campus of rich, little brats that think life in Venice is all about them - which it plainly is not. 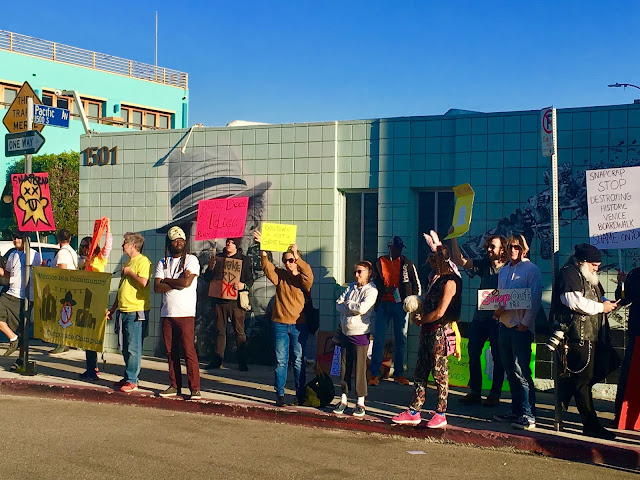 The Snapchat security (notoriously known to be dicks) skulked around the fringe, occasionally doing laps in their dumb little golf carts or plain cars, and we all just yelled louder. The cops on the scene were pretty chill, mostly staying out of our way unless someone tried to jaywalk outside of the crosswalk or march in the street instead of the sidewalks, which was mostly about just safety.  Cars would drive by and honk their support and solidarity, drawing louder cheers each time. The best was when a gang of motorcycles did laps around Market, revving their superloud motors right outside the front doors of Snapchat. I bet not that much got done in there yesterday. Good. 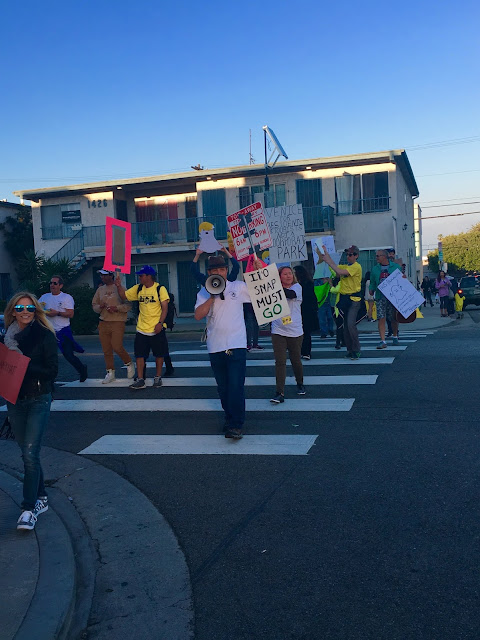 We all know how much Venice has already changed, and that change is inevitable. There is, however, a respectful way to implement change, and that is not the course being laid out by Snapchat. They release little statements about how they want to be a part of and give back to the community, but it's all b.s. They think Venice is their Snap world, and we're just living in it -while we still can afford it. We were there yesterday to let them know that the opposite is true. They are in OUR town, and we're not going anywhere. We can chant and protest every day. They can go somewhere else and be an office park in a place established for that, not turn one of the most beloved Southern California destinations into one. 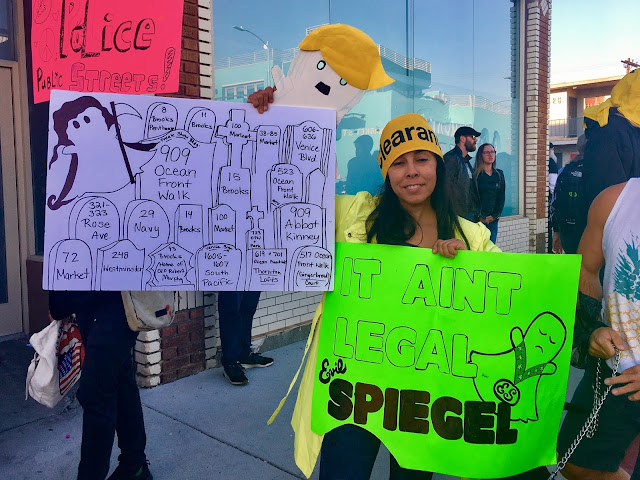 Speakers chanted and orated about their love for Venice over a makeshift P.A., and a playlist of protest-appropriate jams blared in between. Bob Marley, Bob Dylan, Rage Against The Machine ... a soundtrack for the resistance that we all sang and danced along with ... because Venice follows the Emma Goldman dictate of "If I can't dance, I don't want to part of your Revolution." Venice protests - like everything else - are fun. And that's what we're fighting for. We don't want to be a corporate playground, and no one that visits here wants that. We/They want that funky, unique, exciting, unpredictable Venice. Think about it. Mull it over, Snapchat, because you picked the wrong group of People to fight with. We won't go away. 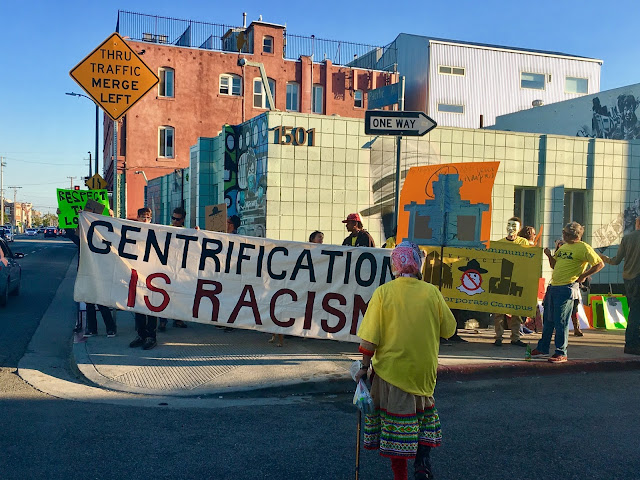 We won't go away because of little dudes like our friend, Kingston, here. He was born and is being raised here in Venice, by parents that love it here and want a cool Venice to bring their son up in. No one wants to tell their kids that it USED to be hip here. Why would any company want to be responsible for that? Why would anyone support a company that would do that to a World landmark without a second thought? It's disgraceful. 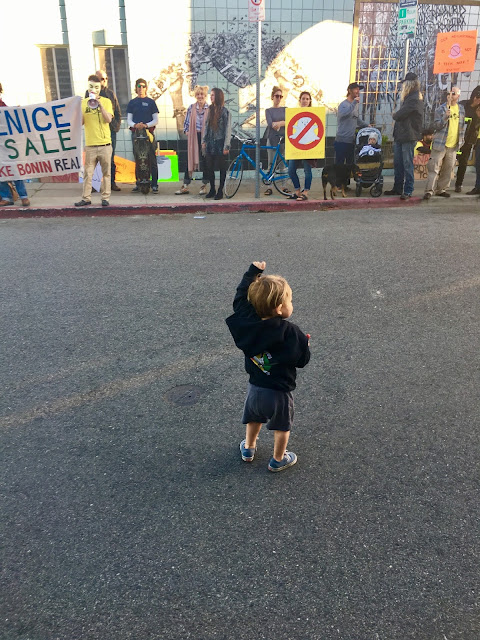 Little Kingston felt it. He could not be contained, insisting on getting right out in the street with his tiny fist raised, all on his own. He is why we were there. We want to make sure he gets to be proud of his Venice. People don't move here or come here or stay here because they want to be like everywhere else. They're here because they felt that something special that is Venice, and don't want to be anywhere else. Chants like "Keep Venice Weird" kept up until after sunset, and as the rush hour traffic on Pacific grew, so did the noise. If I worked at Snapchat (which I never would), I'd be embarrassed. First, for adding nothing to society but a time-waster, and second, for working for a company that is so widely despised and unwanted here. Clearly. 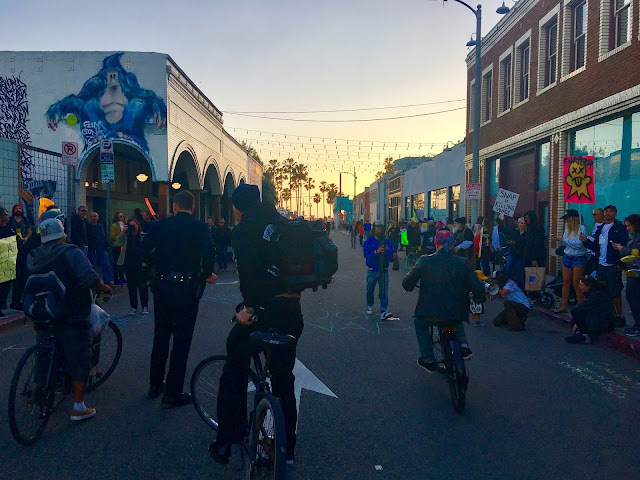 We're all hoping this IPO fully tanks, and soon the unfriendly ghost of Snapchat will just be a bad nightmare memory here in Venice, and we can all go back to gathering in the name of good vibes. Venice vibes. No matter what happens with it, they can expect to keep hearing from the still very strong Venice community, loudly and proudly.