Last night was the first Venice Art Crawl of 2017, and it was a complete blast. The theme this time was "This Is Venice", and everyone did their best to show what that was. REALLY was. I'm not sure if it had anything to do with it being St. Patrick's Day Eve, but people were in the mood to go OFF. And did. 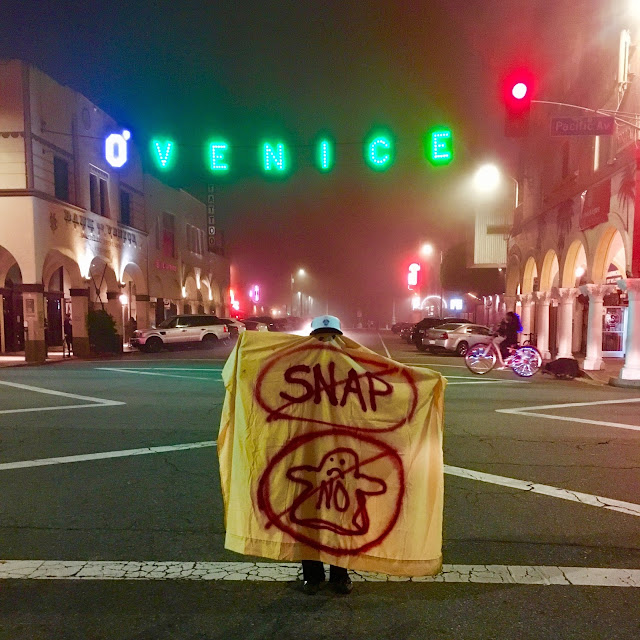 We kicked off the night at In Heroes We Trust with a little music and pre-party, as you do. This Crawl focused on the Venice Boulevard corridor (I've always called it the "Cultural Corridor", and in fact, this is the zone that Danny Samakow is talking about making our Venice Arts District. Solid.), from the beach to Beyond Baroque. With so much ground to cover, I had to kick in the spurs and wrangle everyone to go, and after zooming past the gorgeous Paris photos at Le Pop Up Gallery on Abbot Kinney, we traipsed through the walk streets to Beyond Baroque, who were hosting the Inaugural L.A. Punk Film Festival. How cool. The only thing was that we had no time to sit and watch films when there were still miles to walk. They might want to think about having it be its own event next time, so everyone can attend. Just a thought. It was fun just walking around last night, almost like Halloween for adults, with crowds of people walking the streets in clusters, letting everyone know which house/venue not to miss. 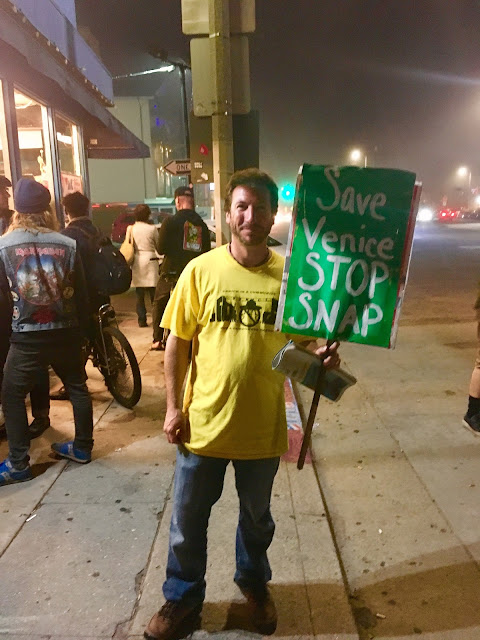 One not to be missed was  at the corner of Venice and Abbot Kinney, where the front yard of the new Josa store from Tulum was having a bootleg event, off the map, in true Venice style. Jules Muck was there doing a live painting of a big, beautiful flower on the building, and Death Of Politics played out on the front lawn, pretty much stopping traffic at that intersection. The Electric Bike Parade going by received an enormous ovation as they lit up the foggy night on their colorful cycles. 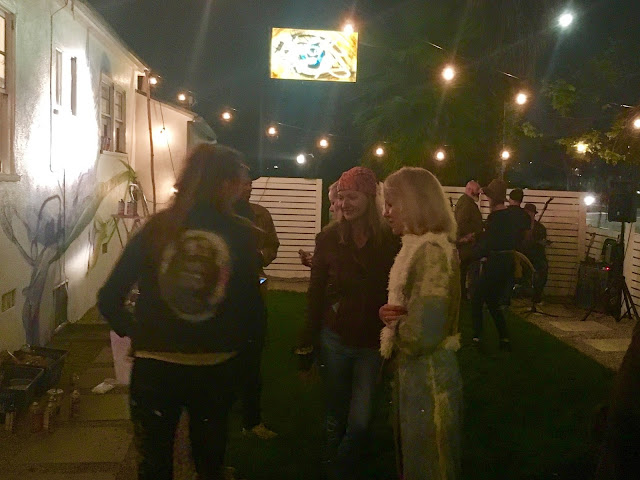 I heard a lot of friends saying this Art Crawl felt like the old days, and they were right. That's what I love about the VAC too, it always feels like it's about the Community, and you always see people you know. Oh, and basically everywhere is serving up drinks, so it feels like the old First Fridays when you could drink and have music in the stores. No one was feeling any pain last night (though we all are today). 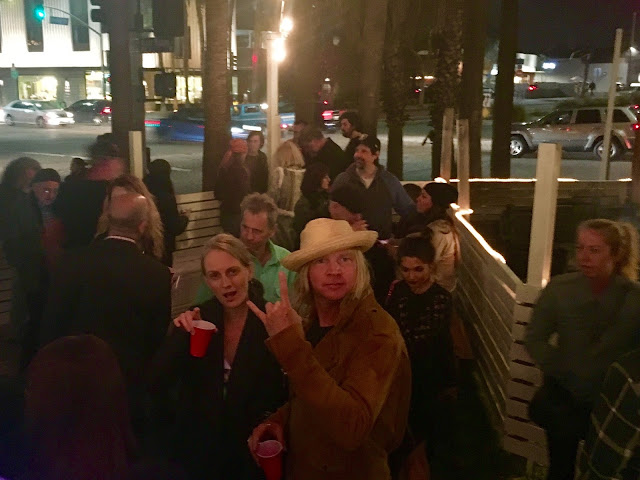 As the clock was ticking, we headed off down Venice to the Library parking lot, where more live painting was happening. 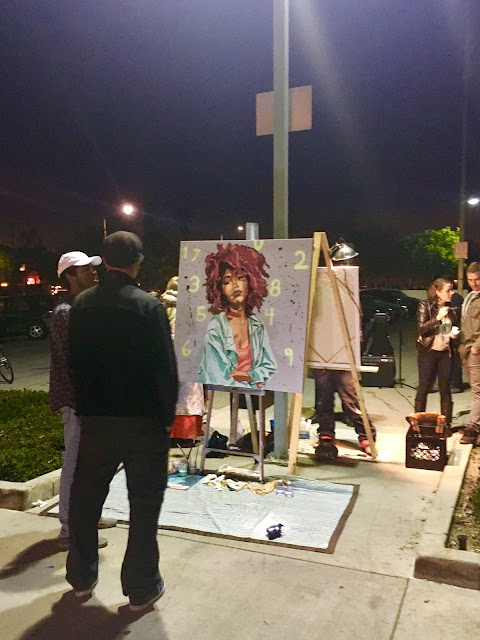 The Boys and Girls Club had a community canvas going, where any and everyone was invited to pick up a brush and add to the masterpiece. We used to do this at Abbot's Habit back when my brother was the manager there. They'd put up big canvases and someone would do a sketch and then divide it into squares. Each person chose a square to fill in, showing how all our different styles made up the creative whole. They always turned out beautifully, and I could kick myself that the one I bid on was lost in one of my moves. Boo. We should do it again before Abbot's closes! O.K. 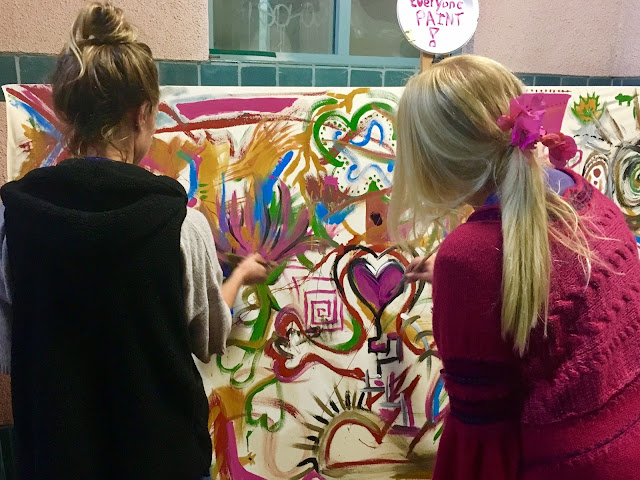 There was an interactive game set up where you could toss a bean bag and win a book. The books were all gone by the time I got there, which was fine because I was awful at it. But good times. The night only got crazier as it went, so I lost all my cards and map with notes and names on it, etc, but shout out to this stop where we had a lot of fun. Thanks! 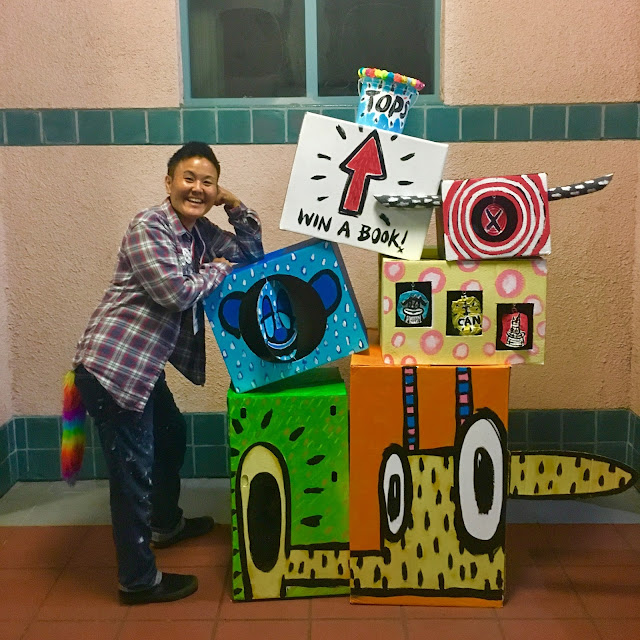 Off we went to Sunny Bak's place, our tireless Art Crawl leader. She was showing her incredible Beastie Boys photos and her venue was stuffed with appreciators of the arts (on a day when the NEA is being de-funded, this Venice experience is more important than ever!) 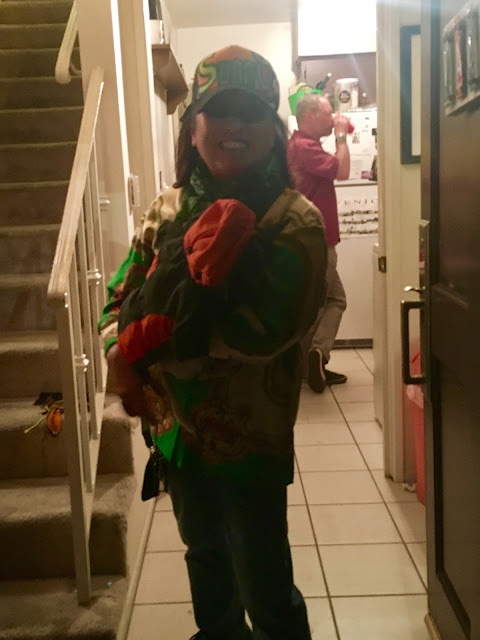 They were also showing Harold Cleworth's fantastic car paintings at this stop, and I loved the Lowrider one that said, "Bless The Lowered".  Fresh. 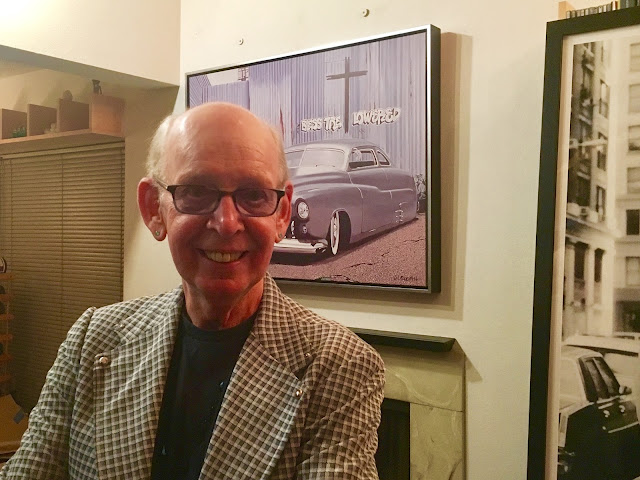 I knew we could not miss the first time the Paper, Scissors, Rock salon was on the Art Crawl, and I was totally right. You could tell from a block away in the fog that this joint was going off. People were partying out on Pacific Avenue, in the street, like the good old days. 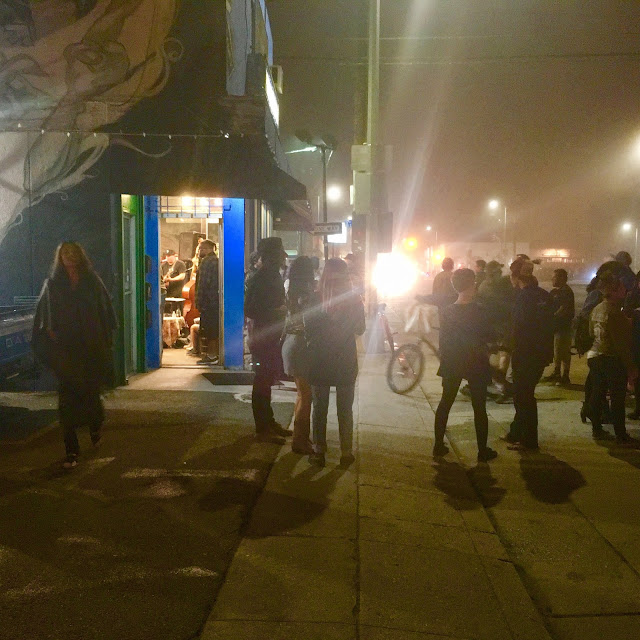 You could hear the music of Jeremy Parker and Masao Miyashiro setting the good vibes, and when we rolled up it was so tight inside you could barely move. 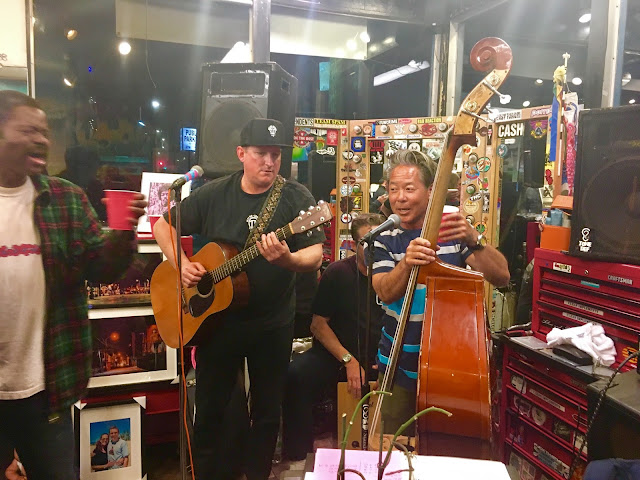 Great photos from Ray Rae and Josh "Bagel" Klassman were on display, and Bart Saric and Jeff Ho were showing their paintings, but the best part of this location was all of the extra fun people who came out. It was like a big house party in there, and this stop was a unanimous favorite. 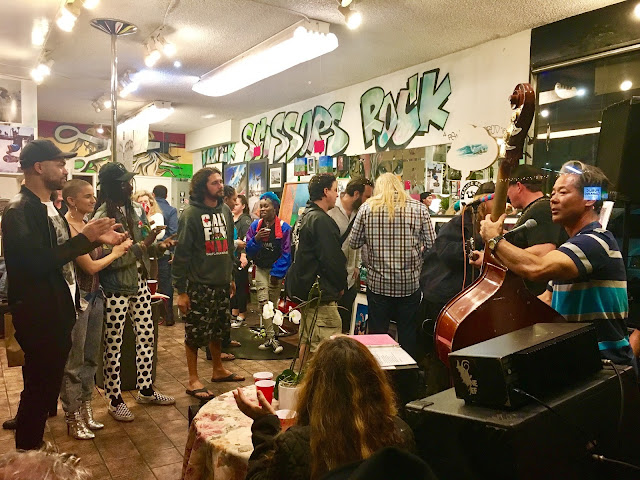 We could have stayed at any one of the stops for the whole evening, as each of them were so fun this time. This is always a problem when you want to see everything, and having such a good time everywhere we went meant that there were some good venues I missed, and I'm sorry. By this hour, we had to hightail it over to Gotta Have It, where our friend's awesome band, Restavrant, was going to be exploding the place into smithereens, as they're known to do. 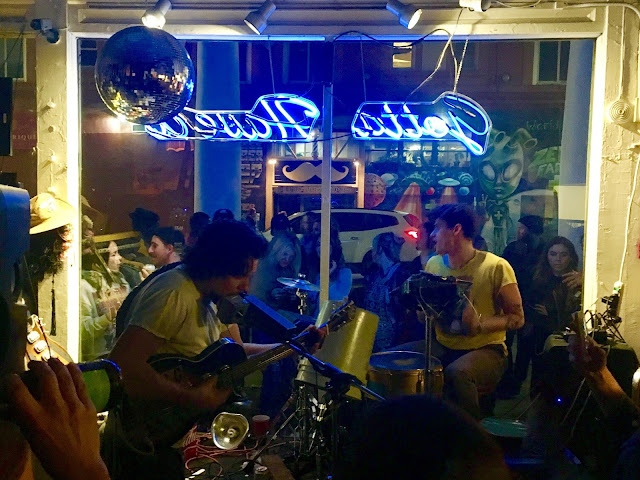 Gotta Have It was also jam-packed, again with solid wall to wall friends. Restavrant does not mess around, and they had the room going crazy the whole set. Like, there was a mosh pit in a vintage store last night in Venice. Super, all-star fun. 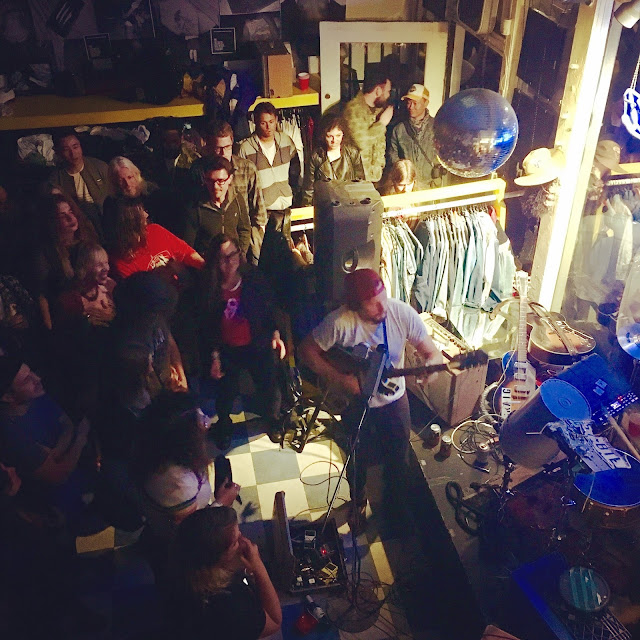 The fog outside only grew thicker, but no one cared and the party spilled out on to the sidewalk out front, as it should. People were making liquor store runs, and passing out beers to friends and strangers alike. It was a good, old fashioned, sweaty, proper rock and roll jamboree, and every single person in there was stoked. It didn't appear that anyone minded that it was now officially St. Patrick's Day, a day on which you're kind of expected to party pretty hard. Again. No problem.

The walk home was thick with mist, letting you pretend you might be sort of Ireland-adjacent. All I know is that I was smiling, and today's text messages were all about how much of a grand old time everyone had. A humble and true thank you to all the participants, from artists to musicians, to planners to players. I love you all an awful lot.