Whew, this week has been all about defending Venice. It's been so encouraging to go out and stand up for our town against the awful Snapchat all week, and see all the homies coming out to join together in solidarity down on Market Street. Meanwhile, over on Abbot Kinney, the same sentiment was scrawled across the slew of posters advertising Logan by The Brig. 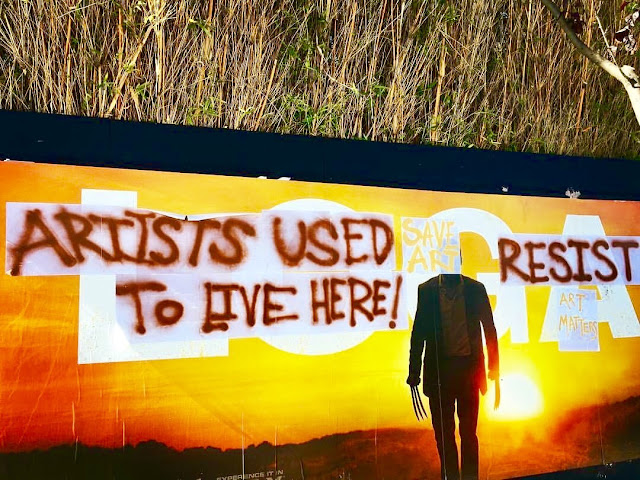 My friend Gallo took that shot, and he's also the guy that created the classic Venice shirt, "Venice - Where Art Meets Crime" (which you can purchase HERE). While I don't agree that artists USED to live here, as I still know plenty who live here, the point was well taken. Every artist I've interviewed has said they moved to Venice to live and work because it's known as an artistic vortex, but also because it was cheap rent back in the day. That's no longer the case, of course, and we've seen a mass exodus of artists to places like Inglewood and San Pedro, and that's a major drag. Thank goodness we have things like the upcoming Venice Art Crawl to keep it arty around here. Again, we know change is inevitable, but just THINK. Think about what made Venice great, and it always comes back to the art, the skating, the beach, the freedom, the FUN. It was never about the money. We also know that money talks  ... but you don't have to listen. Some things are more important.