Superbloom 2017 In The Anza-Borrego State Park

I've been itching for a little adventure, and also highly aware that a rare "Superbloom" of wildflowers is going down in the California desert, so I talked my brother into (begged) heading out there for a road trip - Destination: Beauty. 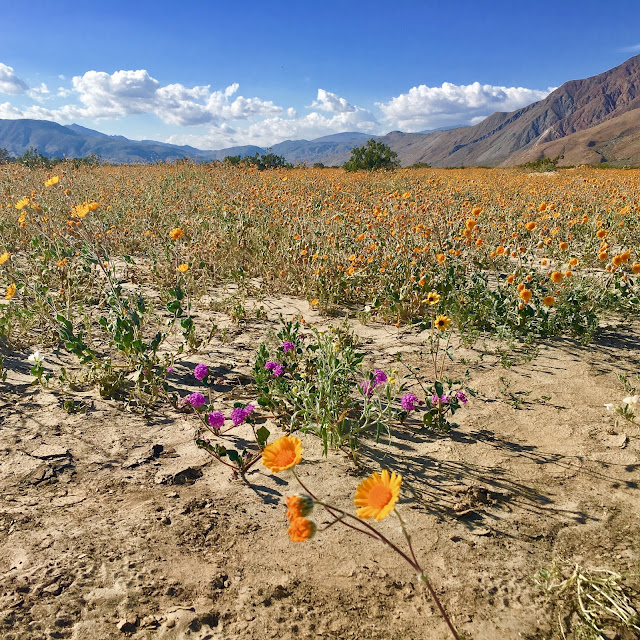 The area getting the most Superbloom buzz by far this Spring is the Anza-Borrego State Park, about three hours away in the Southern California desert, Northeast of San Diego. The rains we finally got this year have caused the desert blooms to explode out all over the place in a riotous celebration of rebirth. Spring has sprung! 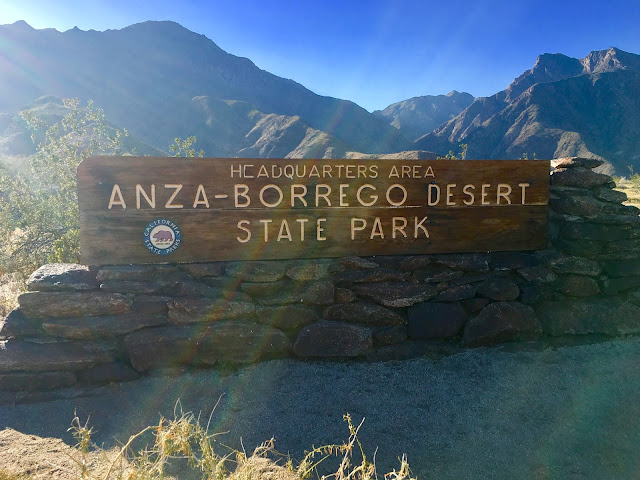 We didn't get that early of a start from Venice (Paul.), so we had a strict pedal to the metal policy of no stopping until we reached the blooms. This was actually kind of hard, because the entire drive was gorgeous, once we left the main highways. It's SO important to me to get deep out into nature pretty regularly. I need to remember that there are wide open spaces and so much natural beauty remains, and we're so, so lucky to have it. Each time I have an outdoor adventure, it renews in me a fierce responsibility to cherish our Earth, and protect it. When I even think of politicians wanting to cut the EPA, and ignore climate change, and build and drill in our National Parks ... I just freak out. All it takes is one visit to any of these wondrous natural destinations, and you just can't believe we're even having that conversation. So, again, these nature road trips are beyond crucial - especially now. 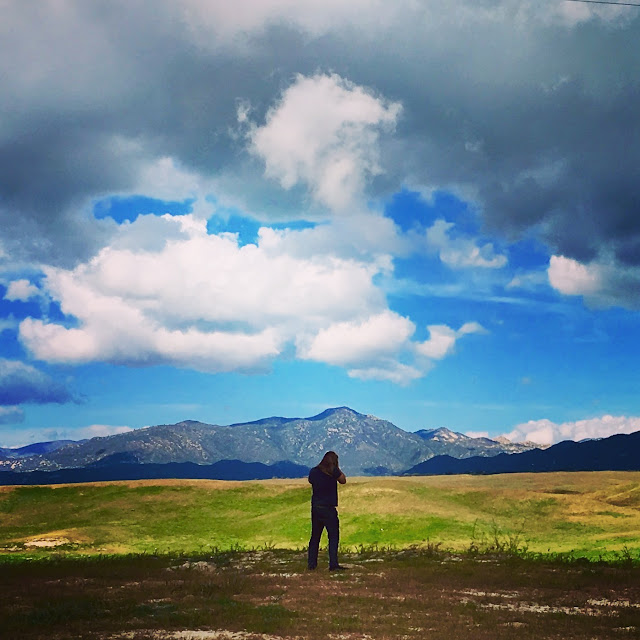 My brother, Paul, is a wonderful photographer, so he of course wanted to stop at every mountain road turn-out to capture each vista. I kind of had to crack the whip. We had a plan to return and get some of them on the way back, and then we took a different route out, so you'll have to trust me that there were some awesome cows, trees, cacti, and ramshackle barns along the way.

Anza-Borrego is deep in Native American reservation territory, and it was cool to travel through and see all these places with such long histories and tribal traditions, surrounded by such vast expanses of stunning beauty. I repeated the truism at one point that the journey WAS the destination, because this drive was so very lovely the entire way out there. Alice In Wonderland and Dr. Seuss references were also made the entire way, as the landscapes were so colorful and surreal, it felt fictional. 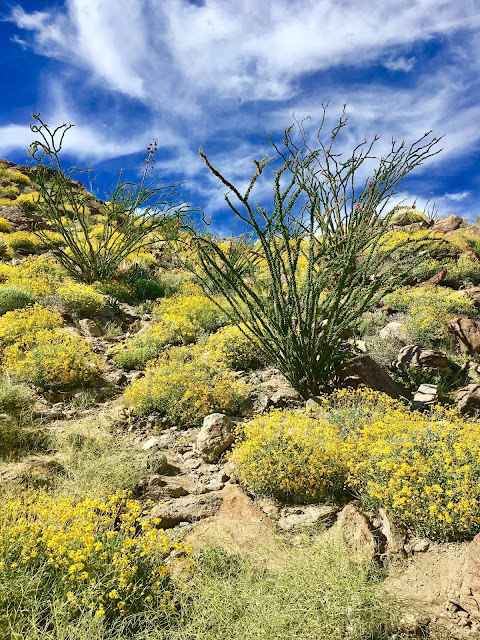 The photographer was on a race with natural light, so we kept speeding along. And never ate. The scenery was so beautiful, we sustained ourselves on a visual diet, actively ignoring the stomach grumblings. I'd heard the traffic and crowds had been awful down there for the Superblooom, but we didn't find that to be the case. One highway adjacent area was pretty riddled with tourists, but that was about it. We skipped the main Park parking lot, carrying on through and out of the little town of Borrego Springs, as per the Wildflower hotline (#760-767-4684). Winding along the mountain passes, commenting on the funny names (Peg Leg Road), we finally came around a curve and BEHOLD! An entire valley full of an absolute Superbloom! 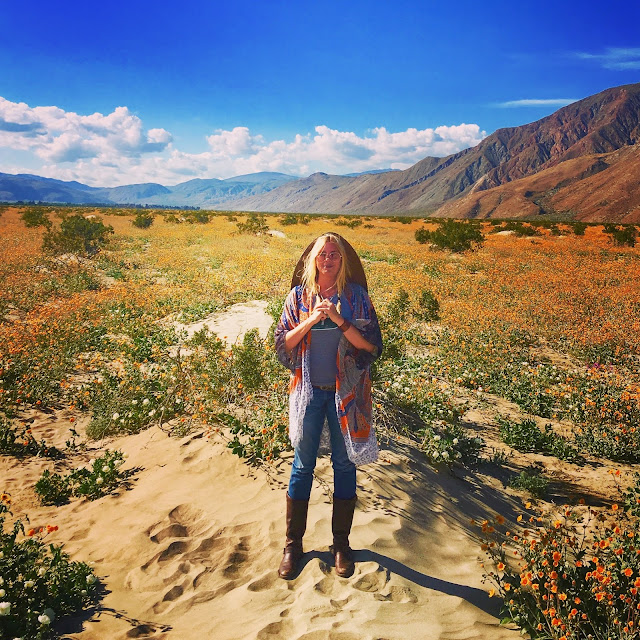 Beauty as far as the eye could see - and then some. One part of the valley was entirely orange, in a floral carpet out of The Wizard Of Oz. The Wonderland of Alice was felt especially here, as while we were hiking out into the massive field of flowers, we looked down to see that every plant had enormous caterpillars squirming around them. They looked like squash blossoms, until you got close up and saw that the thing was moving. It was verrrrry trippy. 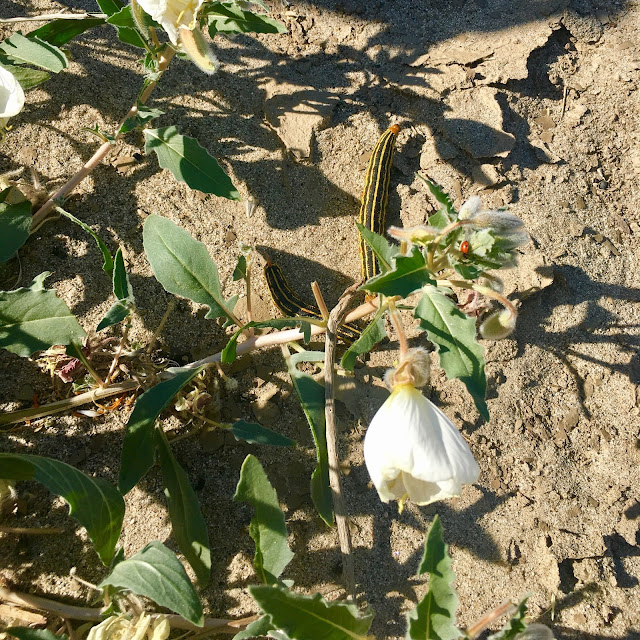 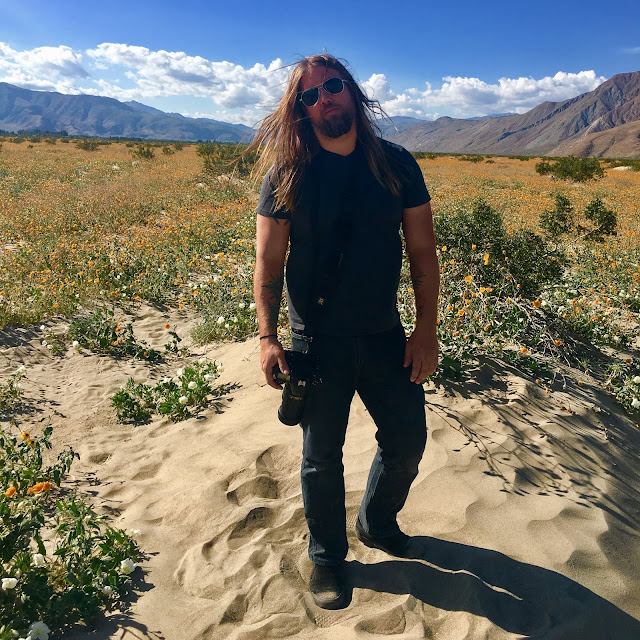 We were still starving, but the sun was starting to dip behind one of the mountain ranges, so we forged on. We hiked around, we read those handy State Park information things. We learned about our place exactly right then in the Universe. We are small. 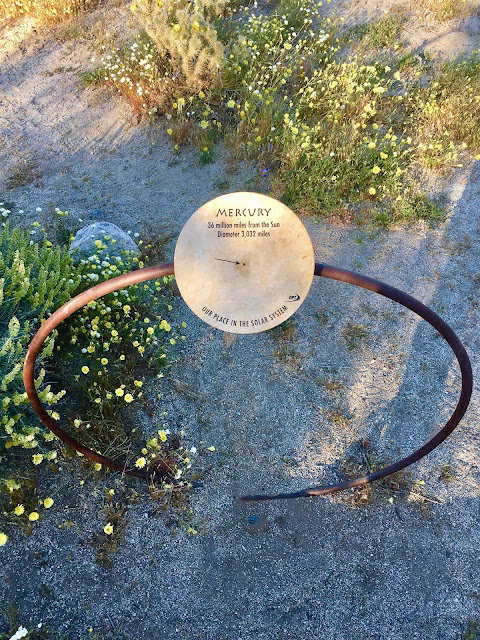 Another perk of an adventure day like this is it does exactly that, shows you your place in this World, and demands that you be in the moment of right then. You even get a reminder that HERE YOU ARE sometimes, which is helpful. 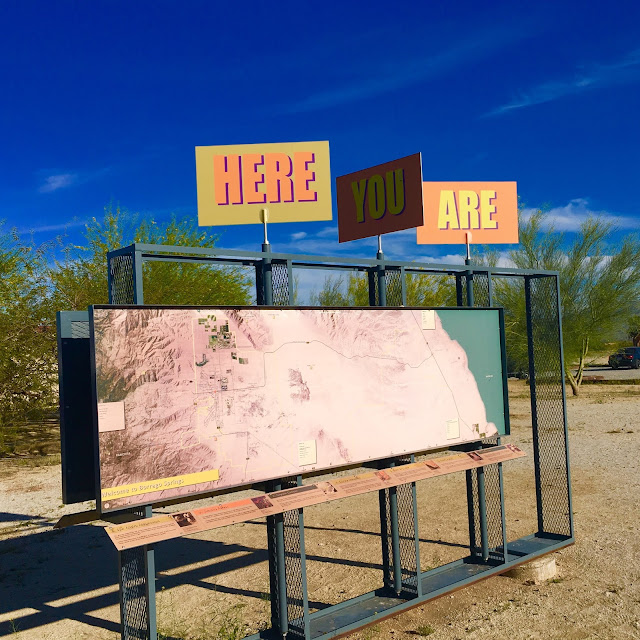 The wind was picking up and the temperature was falling, but then the light got even better, so ahead we forged. You truly could turn in a 360, and every view your gaze fell upon would be prettier than the next. Paul tends to take a long time to edit and post his recreational photos, but believe me, you have something to look forward to. 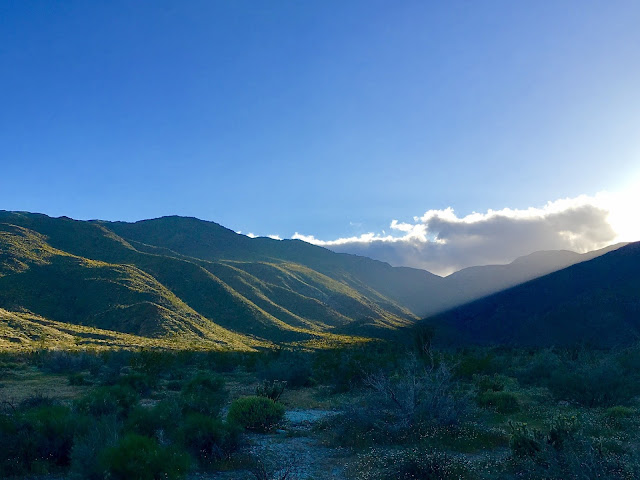 The sunset was a tough competitor to the wildflowers, but as a Superbloom is more rare, I'm gonna give it to the flowers this time. This is starry country, so the view continued to excel even as the darkness began to take over. 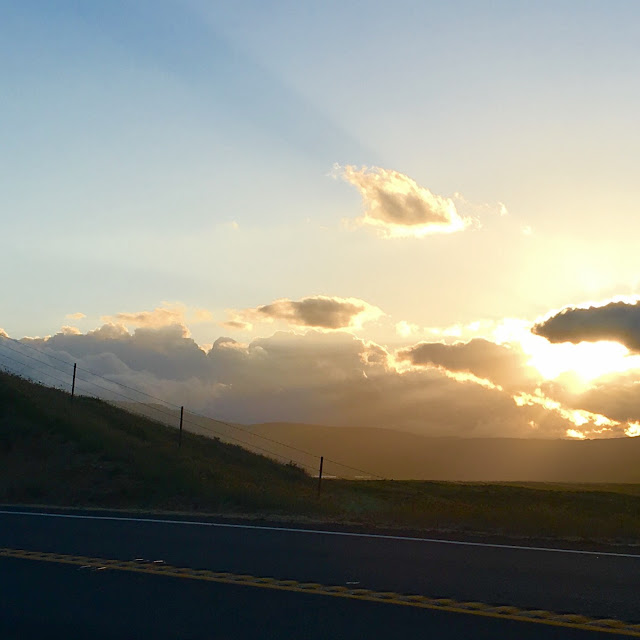 We made a deal that once the sun set, and we had no more light to waste on being indoors, we would stop at the first place we came to on the mountain road out of the Park that wasn't a chain (I don't do chains on road trips). If it had the word "Roadhouse" in its name - even better. We rounded a curve just after the sun was all the way down, and saw the sign for the County Line Wood Fire Grill. Exactly, precisely what we had in mind. We parked, got out, saw there was a picnic table open outside in full view of the waning sunset, and immediately took a load off. We could smell the wood fire from the grill, and though they were short-staffed and swamped with flower-lookers, everything we had was truly delicious. The staff was great. The view was charming. They're adding a big deck and live music this Summer, and suddenly I find myself wondering aloud when we'll be back in Warner Springs, California. Superbloom or not. 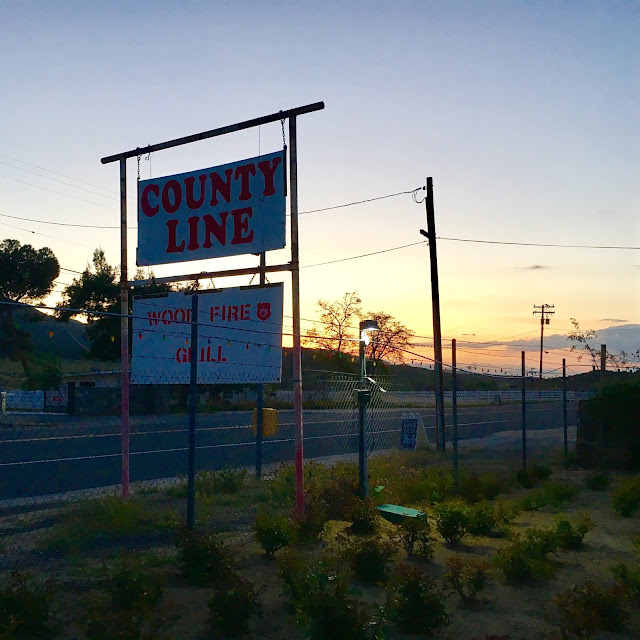 What a sorely needed, wonderful day! I laughed my head off, I marveled at the wonder and persistence of nature, and I felt at my most alive as I breathed in all of that color and aroma. Not just alive, but super, extra grateful that all of this still exists, and that I was there to see it. Road trips are what's up, and I hope you'll get yourself one soon enough that leaves you smiling as you re-live your own memories. If you want it to be Superbloom memories, you need to act fast ... the Sun only lets it last so long. 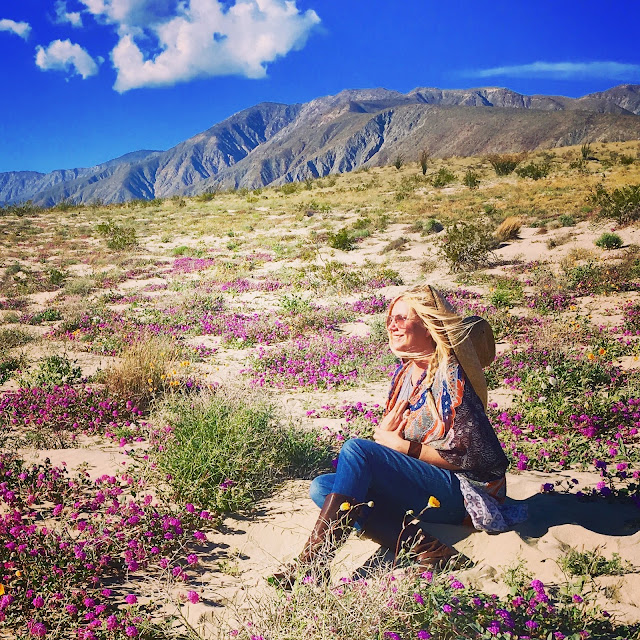 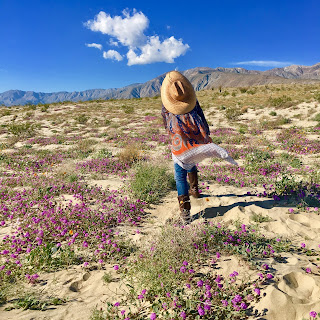