A Zen Oasis In The Canals

Yesterday I was waxing philosophical about life and nature, and so grateful I got out of Dodge for an adventure into some natural beauty. Today I'm on my beach walk in the morning, and so in my head I made it all the way to the jetty at the end of the Marina before I realized there was a giant, stunningly beautiful Pacific Ocean right there. Your thoughts create your life.

I felt kind of bad about that, and took a moment to stop and acknowledge it, and breathe it all in. Then I began the walk home, and got right back inside my head. Some people were walking all slow and taking up the whole sidewalk on Venice Boulevard (drives me nuts, lately it's like walking behind people wandering at the airport), so I ducked into the Canals, both for the beauty and the open sidewalks.

Just as I was grumbling to myself about annoying people and gentrification and flaky L.A. people that don't return messages or do what they say and Ow, I got a hangnail and how can I personally stop climate change and ... a gap opened up in between some houses on the Canal, and I had to stop. It was a Zen oasis. Another reminder to CHILL. 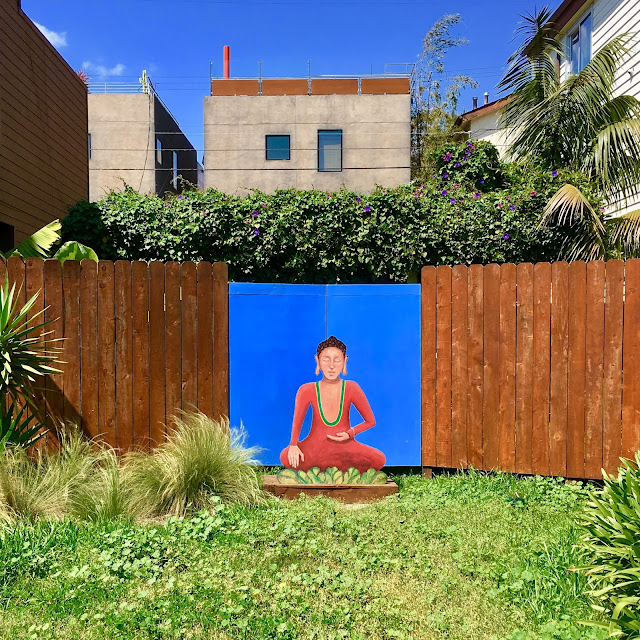 I'm not super up on Buddhism, but I do know a big part of it is to be present. To Be Here Now. Organized religion has screwed up so much of the World, so I'm not a big fan. I did study pretty much all of it in College though, and I know that the overarching tenet they all have in common is to believe in Good. Just add an O to God, because everyone calls that something different. I think it all started as one thing, then like language and the game of Telephone, it spread out and people made up what they wanted to, but it all comes down to The Golden Rule. Do unto others as you would have done unto you. It's so dang simple to believe. But apparently so hard to implement. Faith is believing that we can.

I walked out of the Canals, refreshed, renewed, and reminded once again to be present. To be grateful. To be GOOD. And to try and have it last more than one day. Ommmmmmmmm.