The Concert For Social Justice - Live From Hollywood!

Man, when I hear "Concert for Social Justice", I am, of course, there. The event was held last night at The Fonda in Hollywood by the Grammy Museum and Robert F. Kennedy Human Rights to fund the organizations' "Speak Up, Sing Out: Songs Of Conscience" program that gets kids from K-12 to write songs about social justice issues. It was a show all the way up my alley. 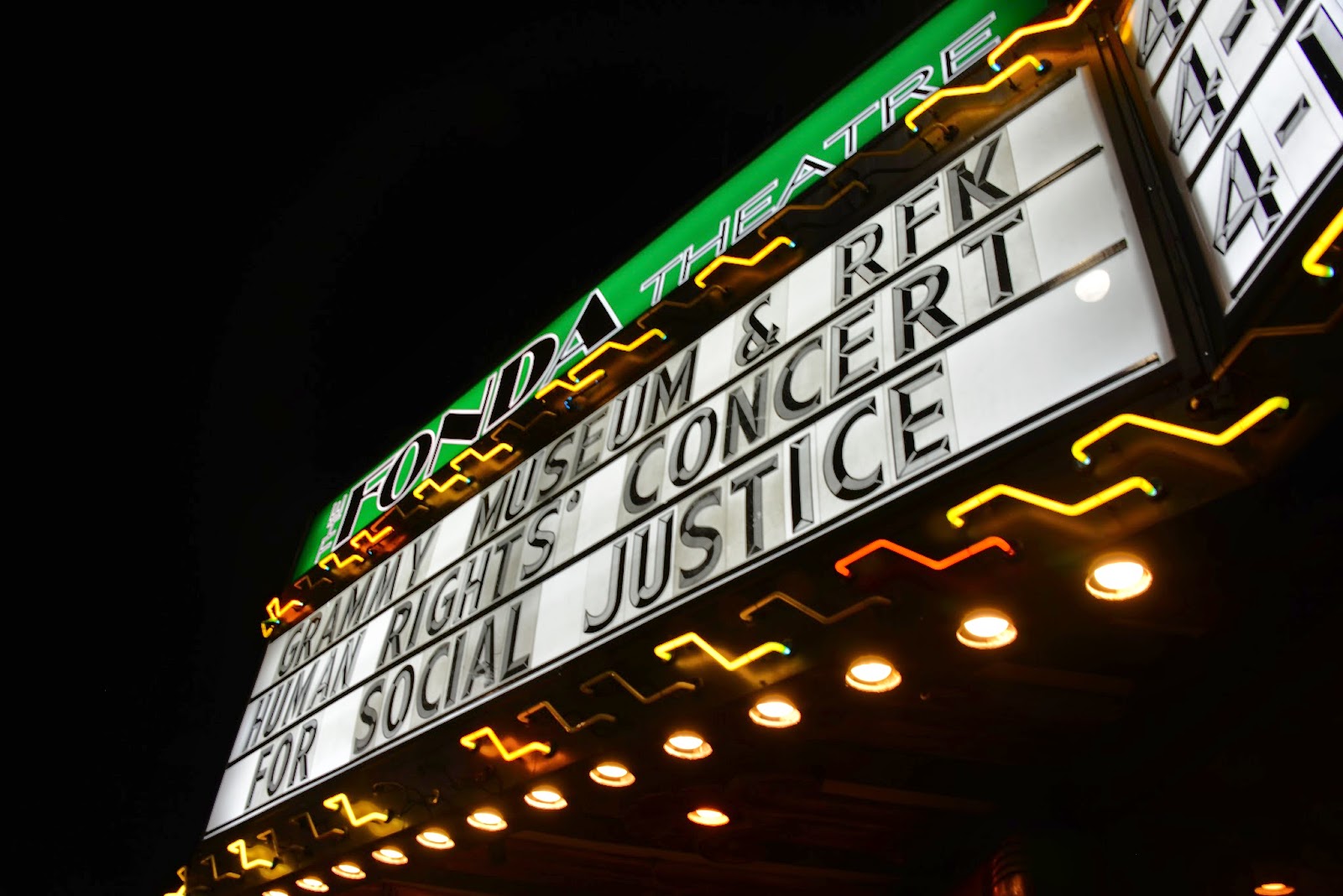 The lovely L.A. traffic caused us to miss all but about the last chord of the marvelous Rocky Dawuni's tune, "Shine A Light" from his brand new album, Branches Of The Same Tree. His happy music with a message set the tone for what would be a wonderful night of voices singing out together in the name of social justice. 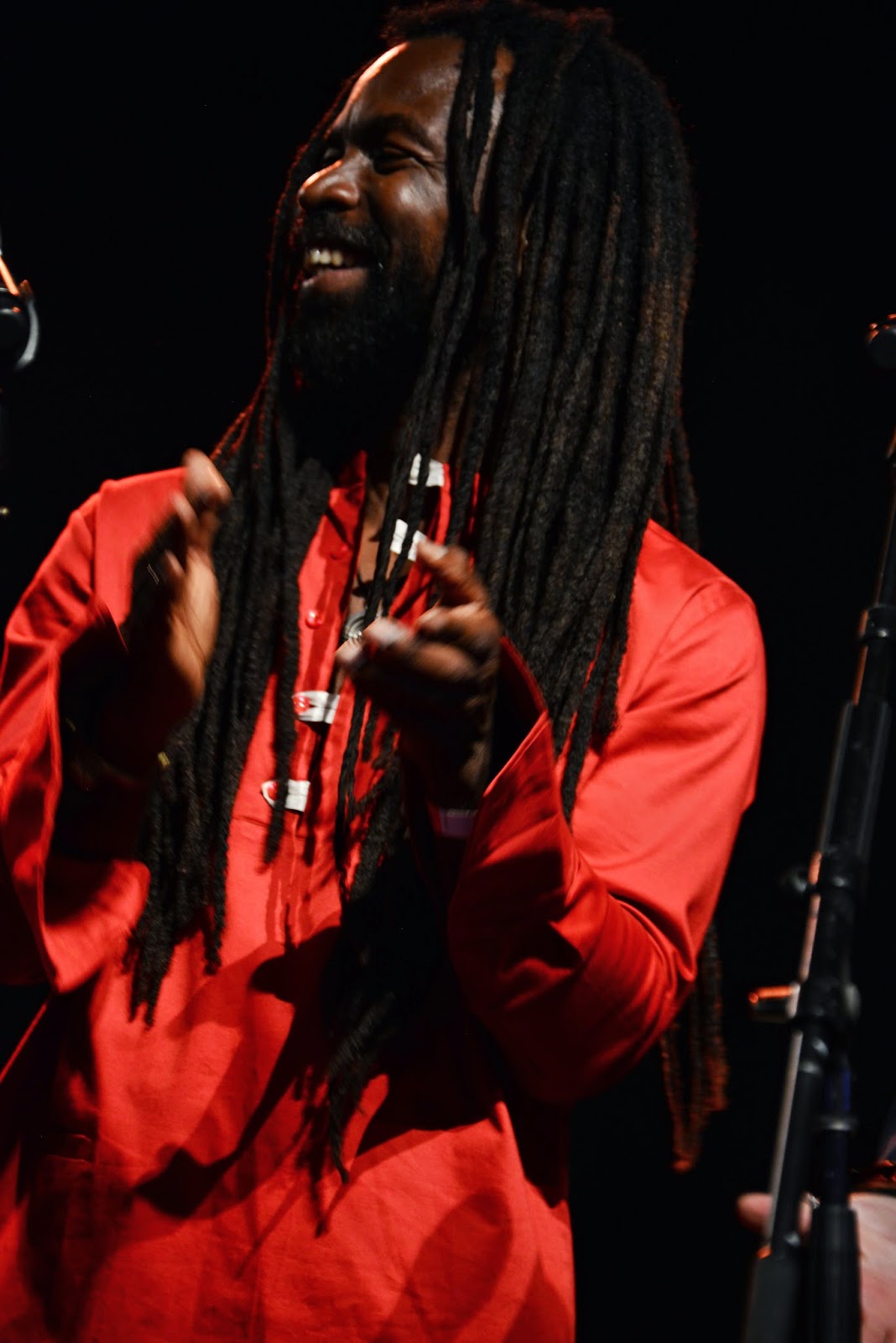 Up next was the Grammy winning group, La Santa Cecilia, and their Latin jams. 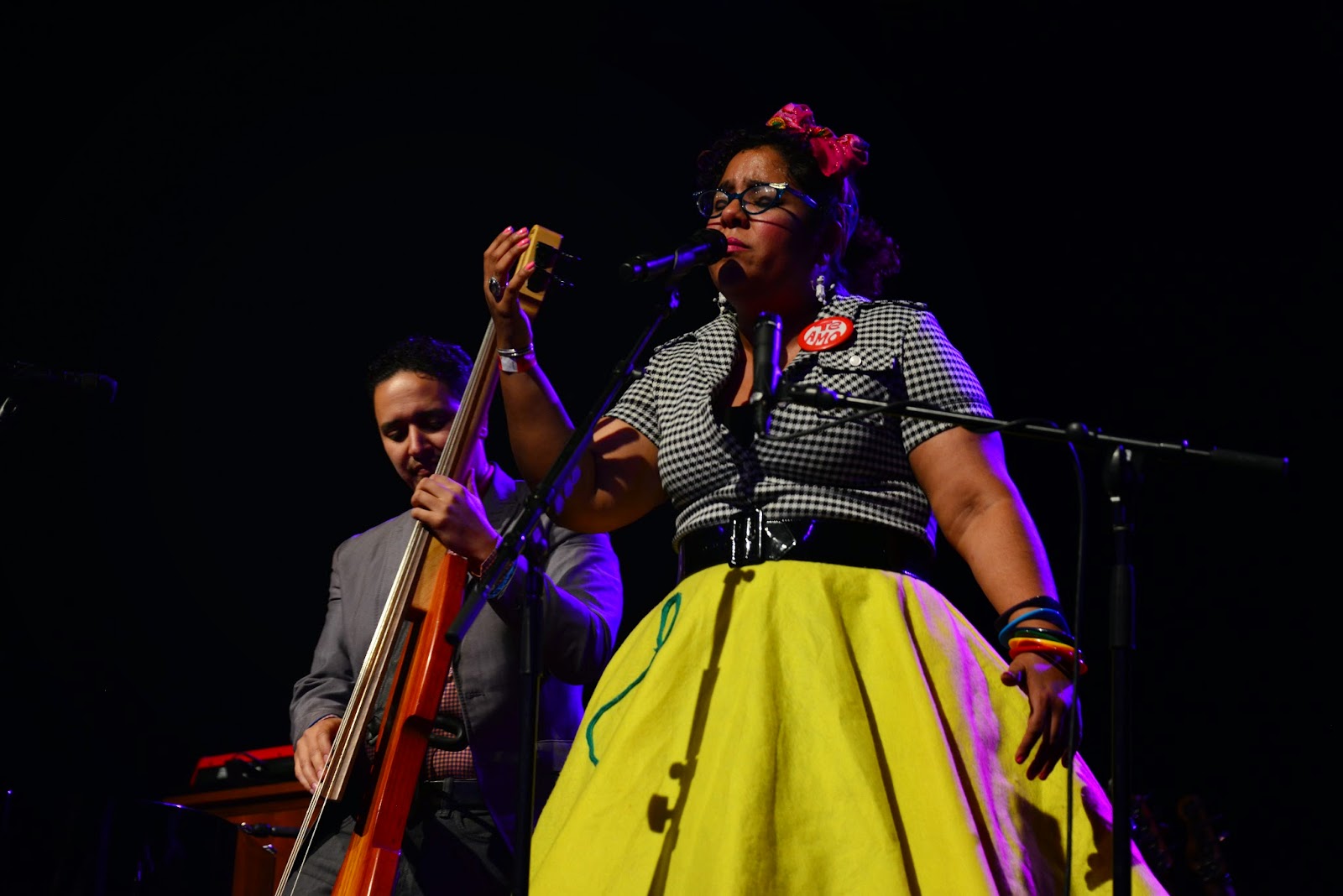 Led by La Marisoul in full yellow skirt, getting everyone up and dancing, as she said, "Social justice music can also be good to dance to!" I don't know what the words being sung were (in Spanish) but the universal beat was impossible to resist. You'll want to check them out for sure. 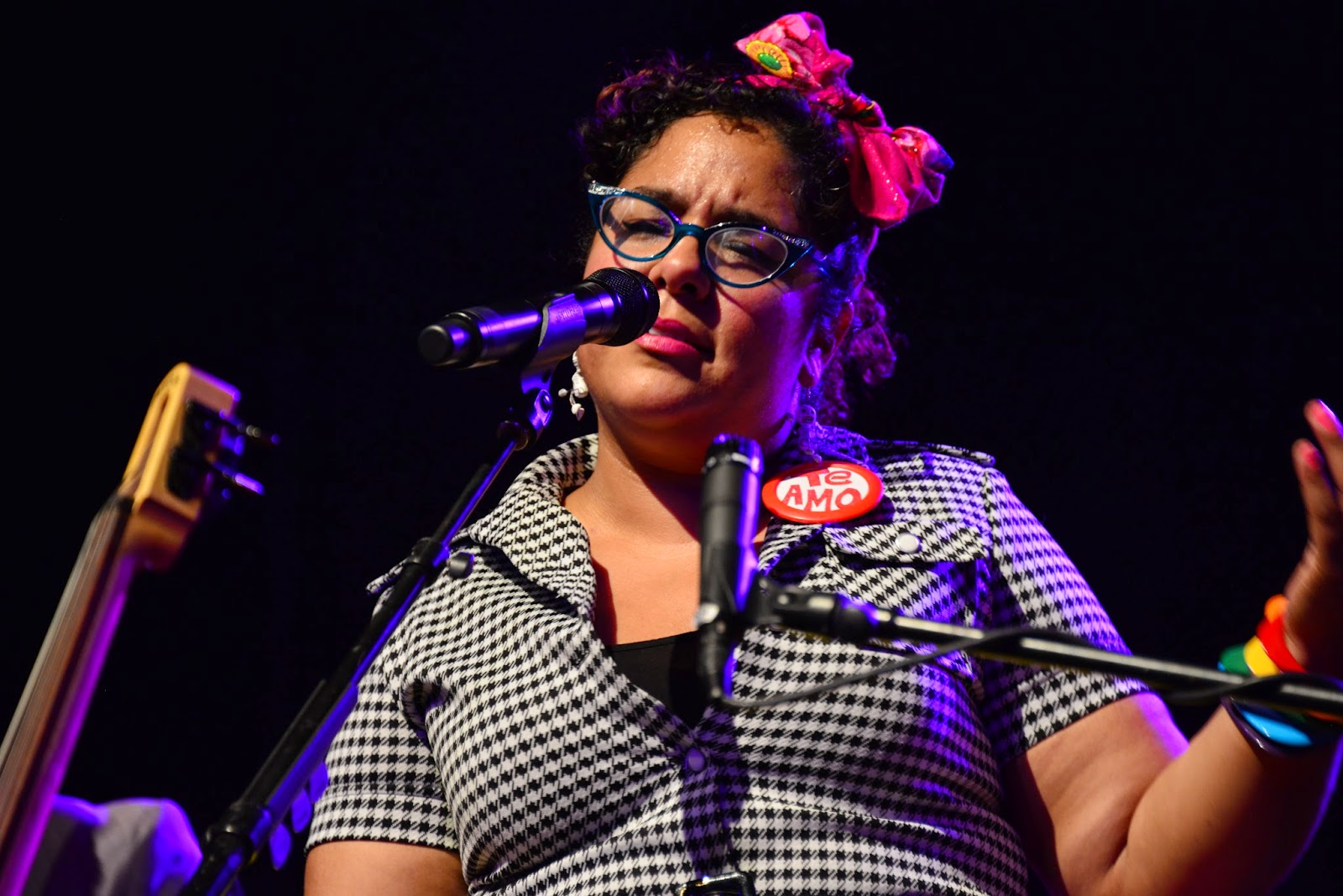 Actresses next took the stage to read letters from around the globe from people speaking out and making a difference for the world. Alfre Woodard led the way, telling stories from Malala in Pakistan, from a Kenyan woman leading a movement to plant trees, and from a woman rising up for the Mayan people ... all ending with the urge to "Speak truth to power". It was moving stuff, and solidified in the minds in all gathered there really what the evening was about - and how very important it is for us ALL to do that truth speaking. 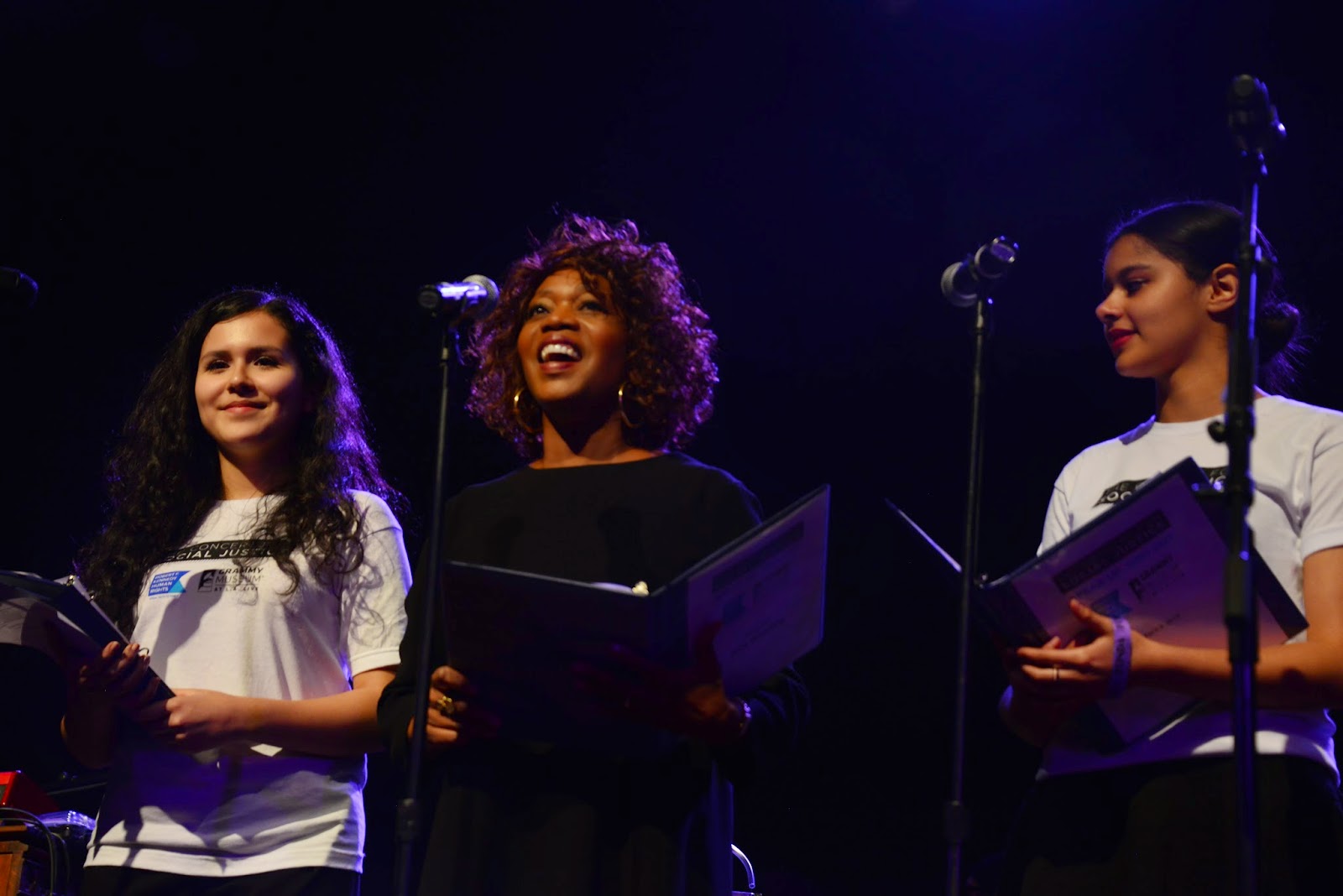 Tom Morello had people yelling for him before he even took the stage - and proceeded to incinerate it. The Nightwatchman and his Freedom Fighter Orchestra had some technical difficulties (like, no sound from the guitar - "The rock can't happen with no guitar."), and took that time to ask "Are we all in this together, People?!" We assured him that we were, and the floor was rewarded with Morello telling them all to move up and get rid of the velvet rope that separated them. 'Cause that's how he is. 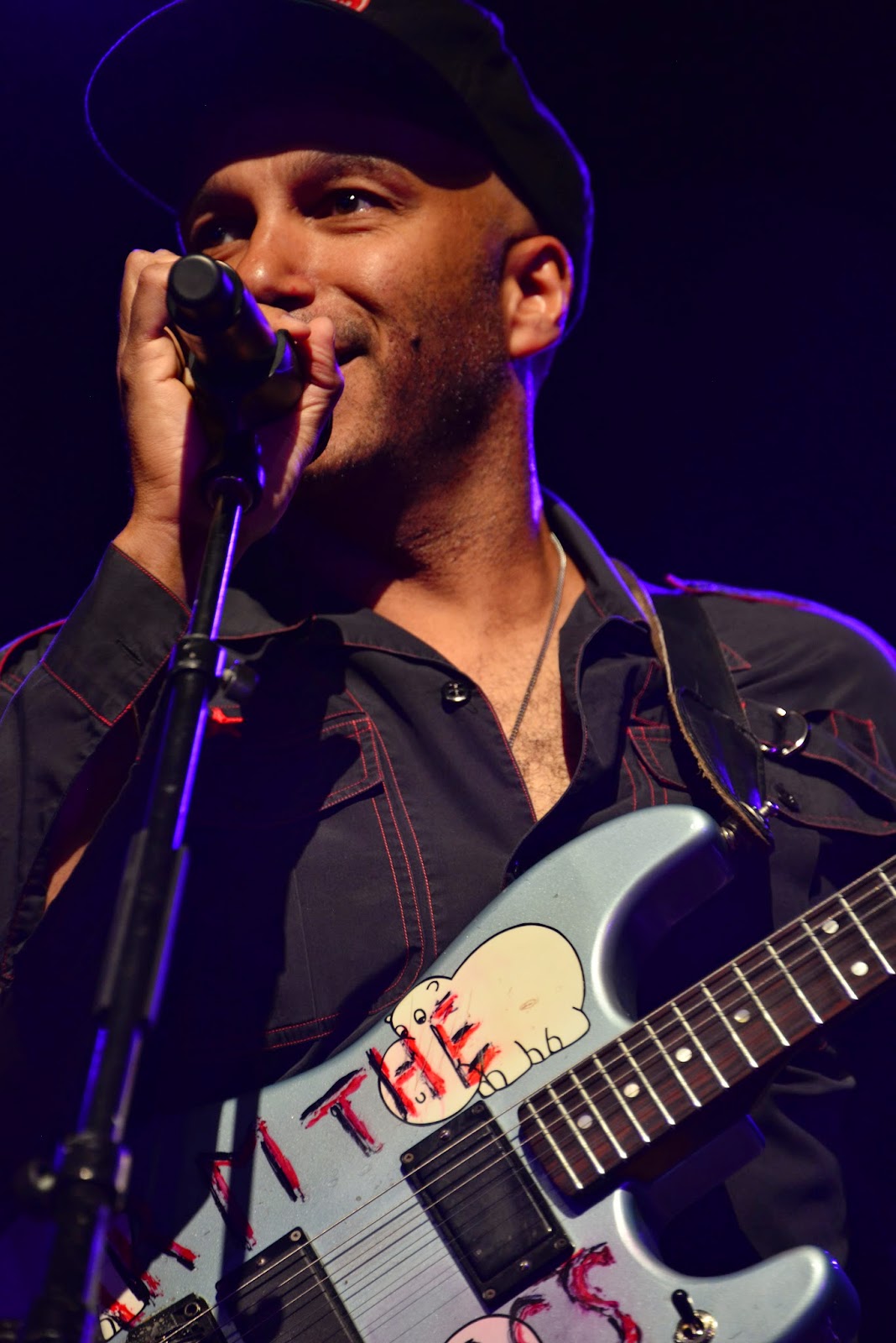 With the crowd now smashed together up front, they lit into "One Man Revolution", with its fresh verse change to say, "On the streets of South Carolina, they're ready to blow" - referring to the murder this week of the unarmed Walter Scott, that this time was fully caught on tape. This cannot stand, and we'll sing about it and talk about it and protest about it and cry about it until it stops. When Morello yelled, "Fuck, yeah!" at its end, he was merely echoing the thoughts of everyone there. 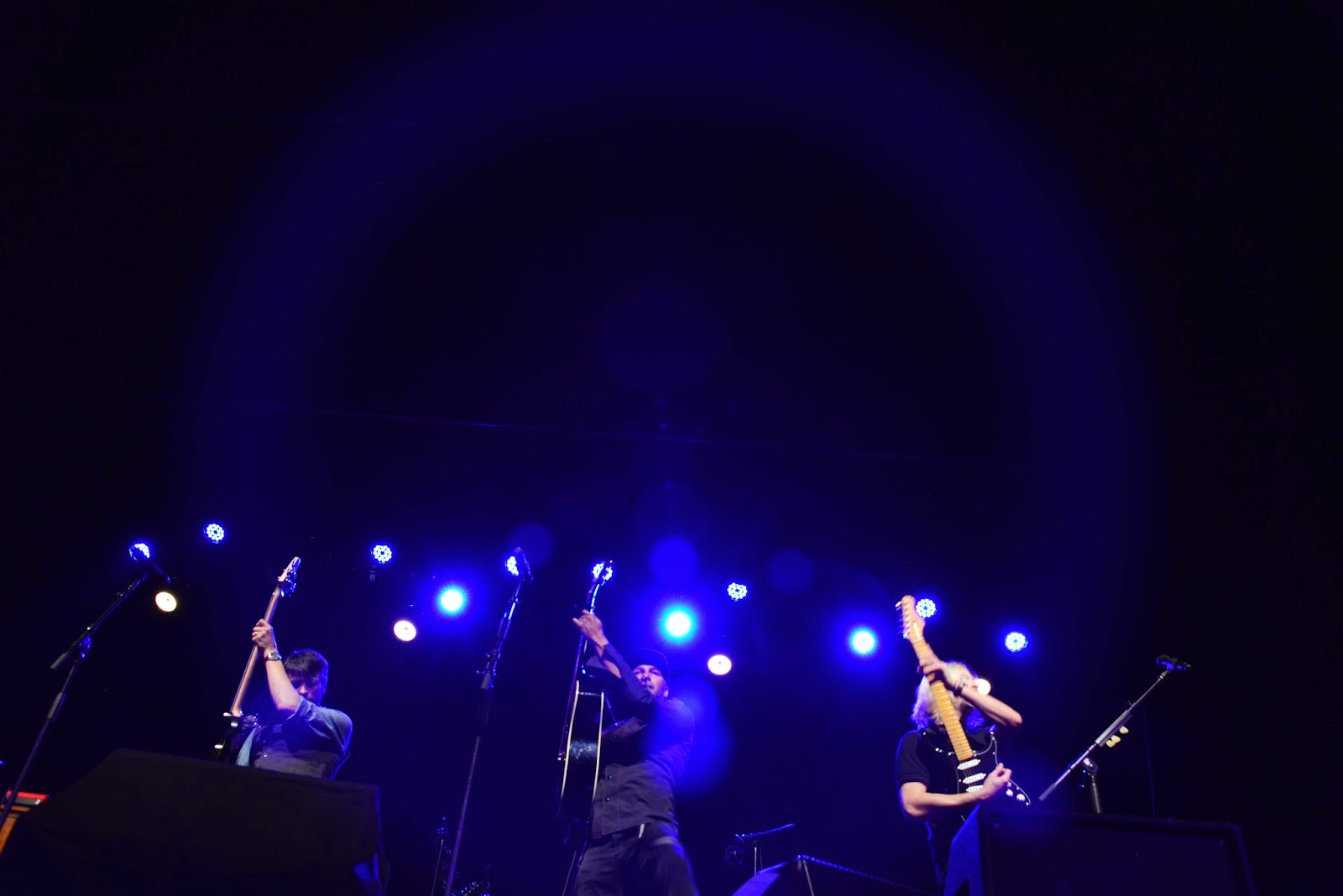 "Black Spartacus Heart Attack Machine"rocked the house silly, and then Morello did his now iconic take on "The Ghost Of Tom Joad", dedicated to RFK and our late friend, Tomas Young. People now anticipate his ridiculous guitar solo on this one, cameras out and toes on tip. I've heard it a ton of times now, and I still get chills every time - especially now on the again changed line "Wherever there's a cop shooting a guy ... Look for me, Ma, I'll be there!" We ALL need to be there now. When Morello lifted his "Arm The Homeless" guitar to do his teeth solo, it revealed the sign on its underside, "I Can't Breathe!" And really, none of us really can until this complete madness stops. 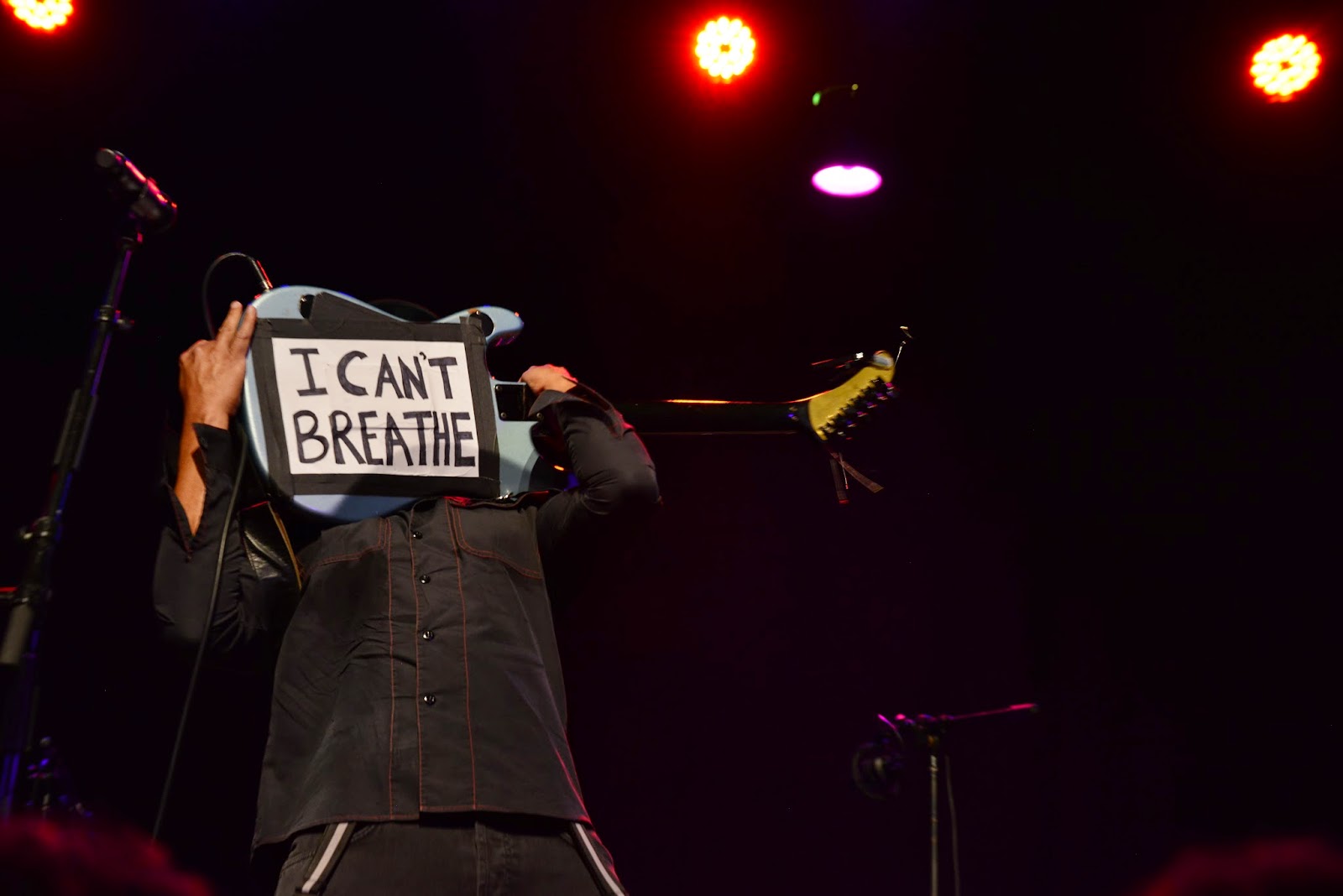 Everyone was on their feet after that one, screaming for more, and they got it. "The Road I Must Travel" sealed the deal for Morello with this crowd, as the place was all in, singing heartily along with the "Na na na na na!" chorus, and then losing it when it merged into the guitar riff from Rage's "Sleep Now In The Fire". 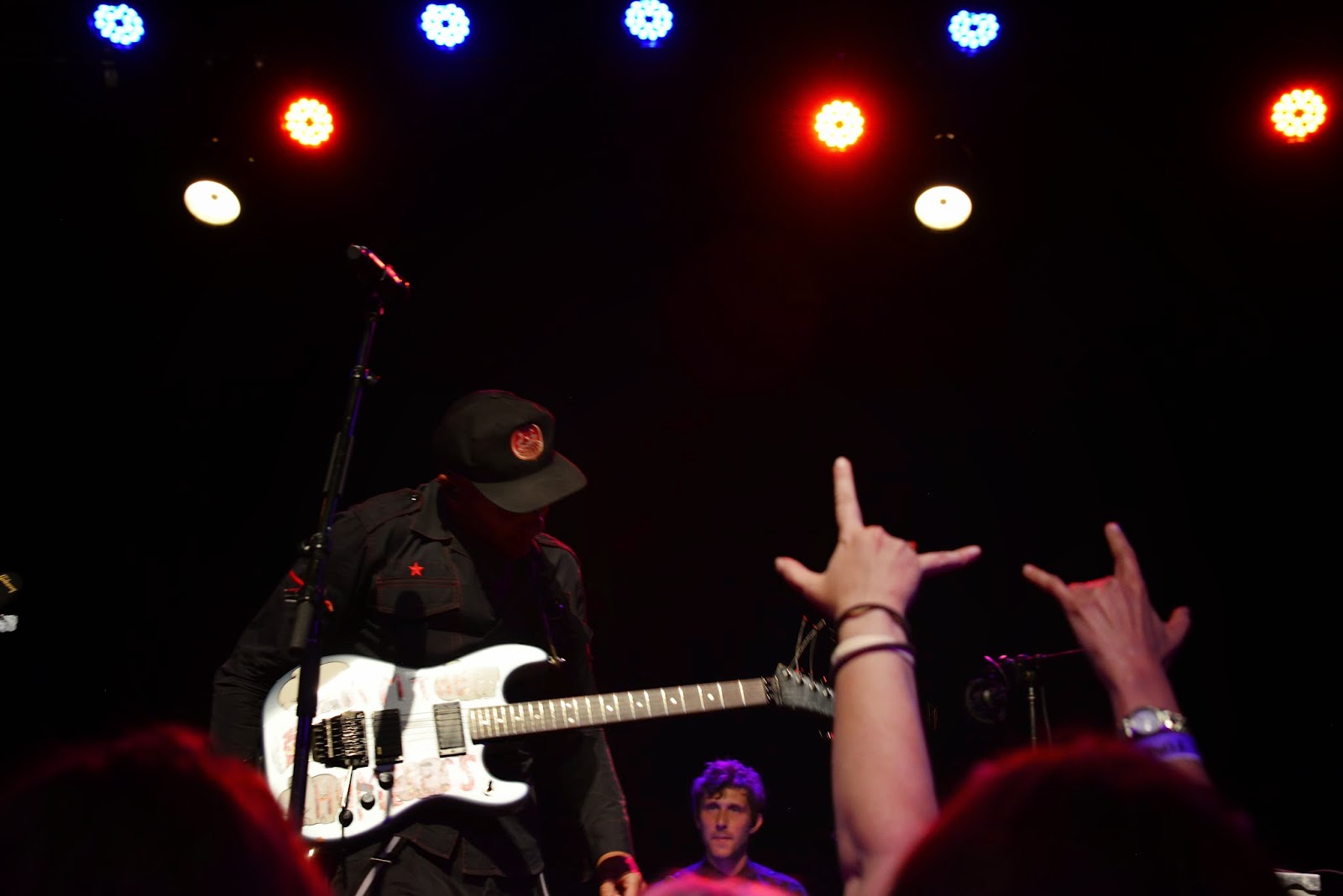 Another standing ovation, and the room was still trembling when a group of actors took the stage. Martin Sheen, David Arquette, Billy Ray Cyrus, and Chad Lowe took the stage to read letters from the men around the world who are speaking their truth to power. I had trouble hearing them because people were speaking loudly to each other up in the balcony, but did catch Lowe saying, "Tom Morello stood right HERE!" It was that kind of a performance. 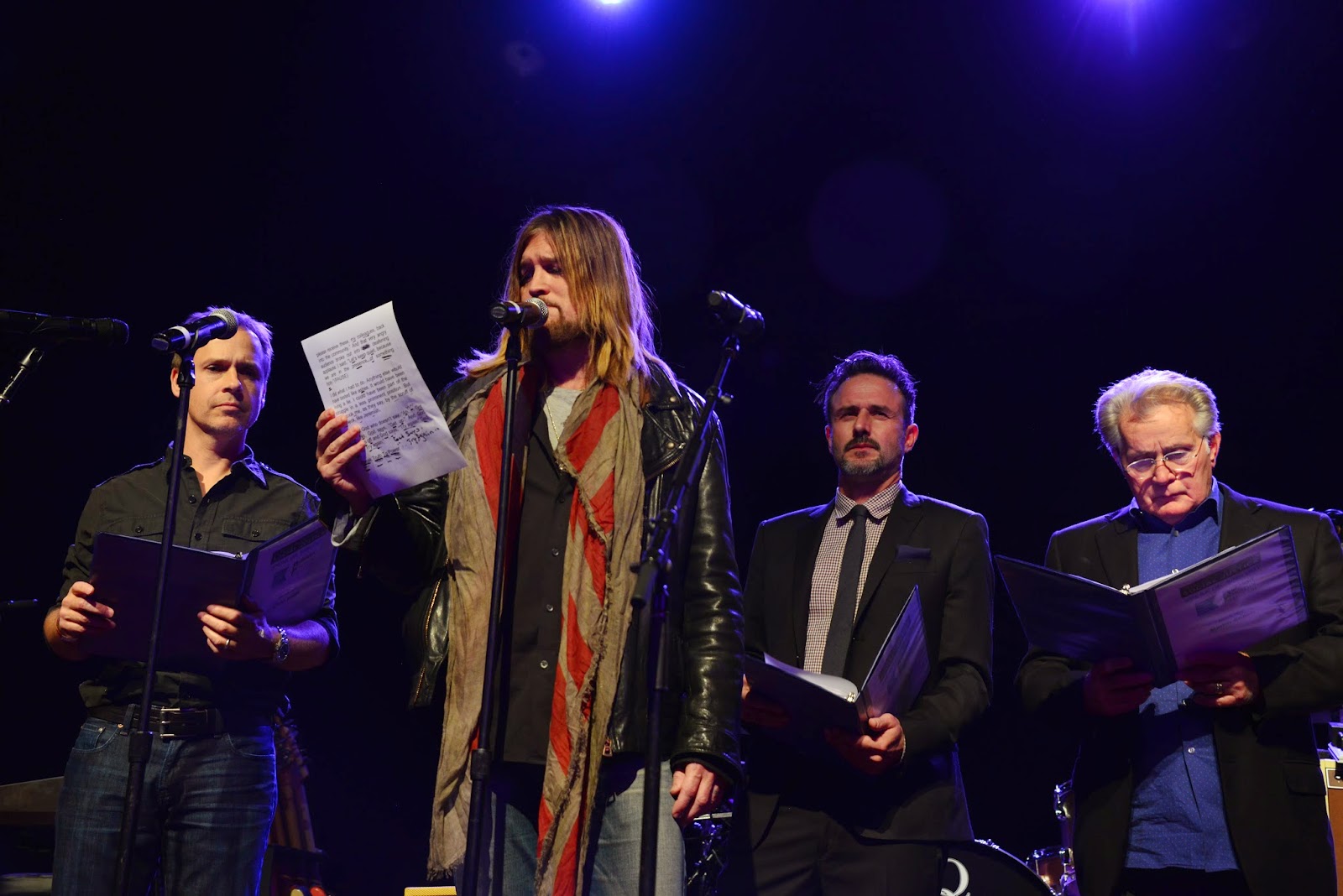 "They said Social Justice, and I said 'Yeah'", said Melissa Etheridge when she came on to sing the great and aptly titled for the night, "Testify". Her voice is so unique, raspy and strong all at once, and just she and her acoustic guitar held the room rapt. Even more so when she talked about her coming out in 1993.  "Social justice starts with the individual. Someone steps up, someone else steps up, and then it's a whole crowd ... and now it's all 'Oh, gay marriage' ... We're all really different, and that's the thing we have in common." Truth! Then she sang her "Silent Legacy", with its beautiful line, "Pray in the darkness for wings to set you free ..." Arms were held in the air to applaud after that one. 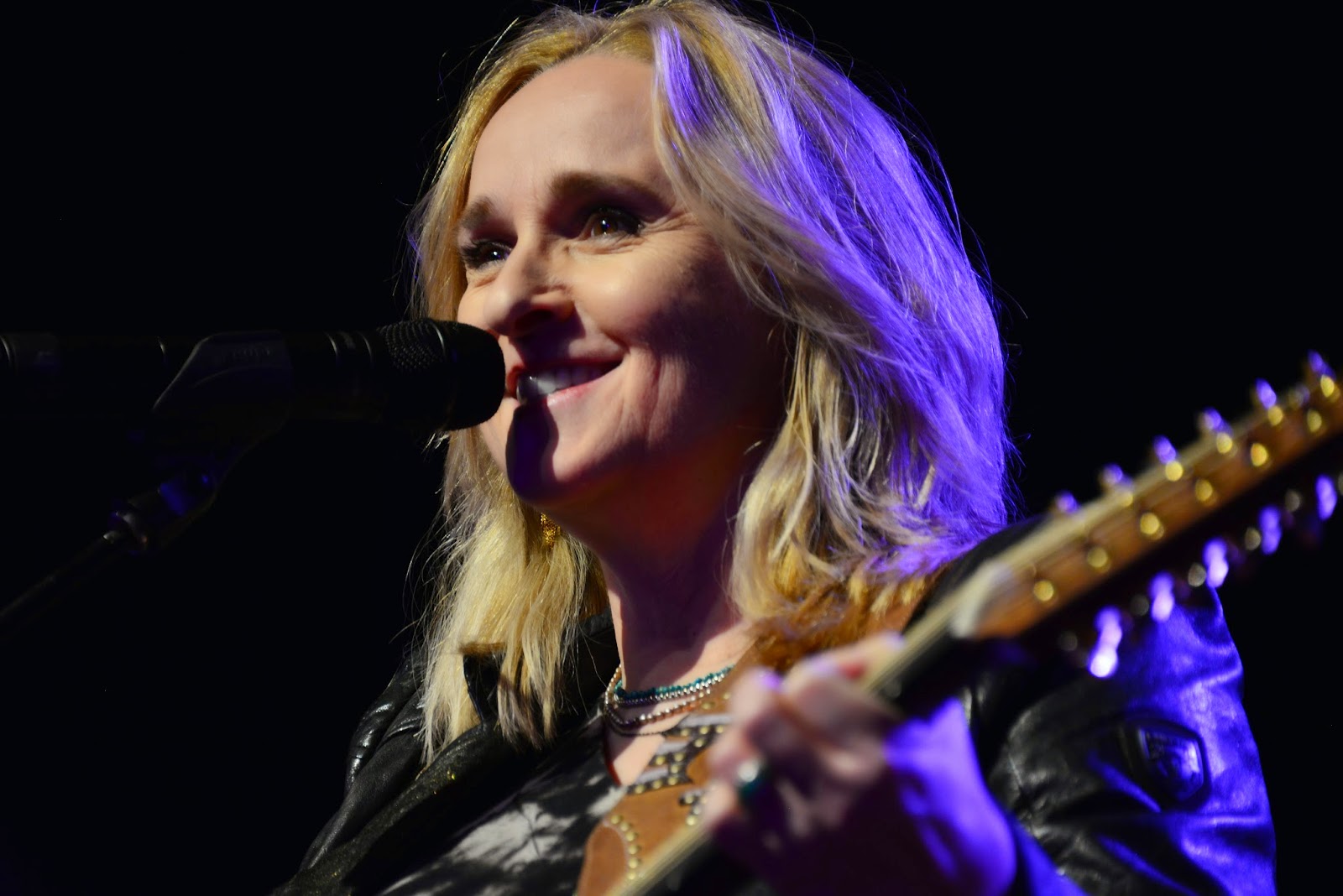 Etheridge next talked about coming out about being a cannibas user. "Plant medicine is good medicine. The freedom to explore our consciousness is a very important freedom." More truth, hit home with her cover of Brandy Clark's "Get High". The lighting turned green, and the air grew thick, as we all smiled along, knowingly - or wistfully. 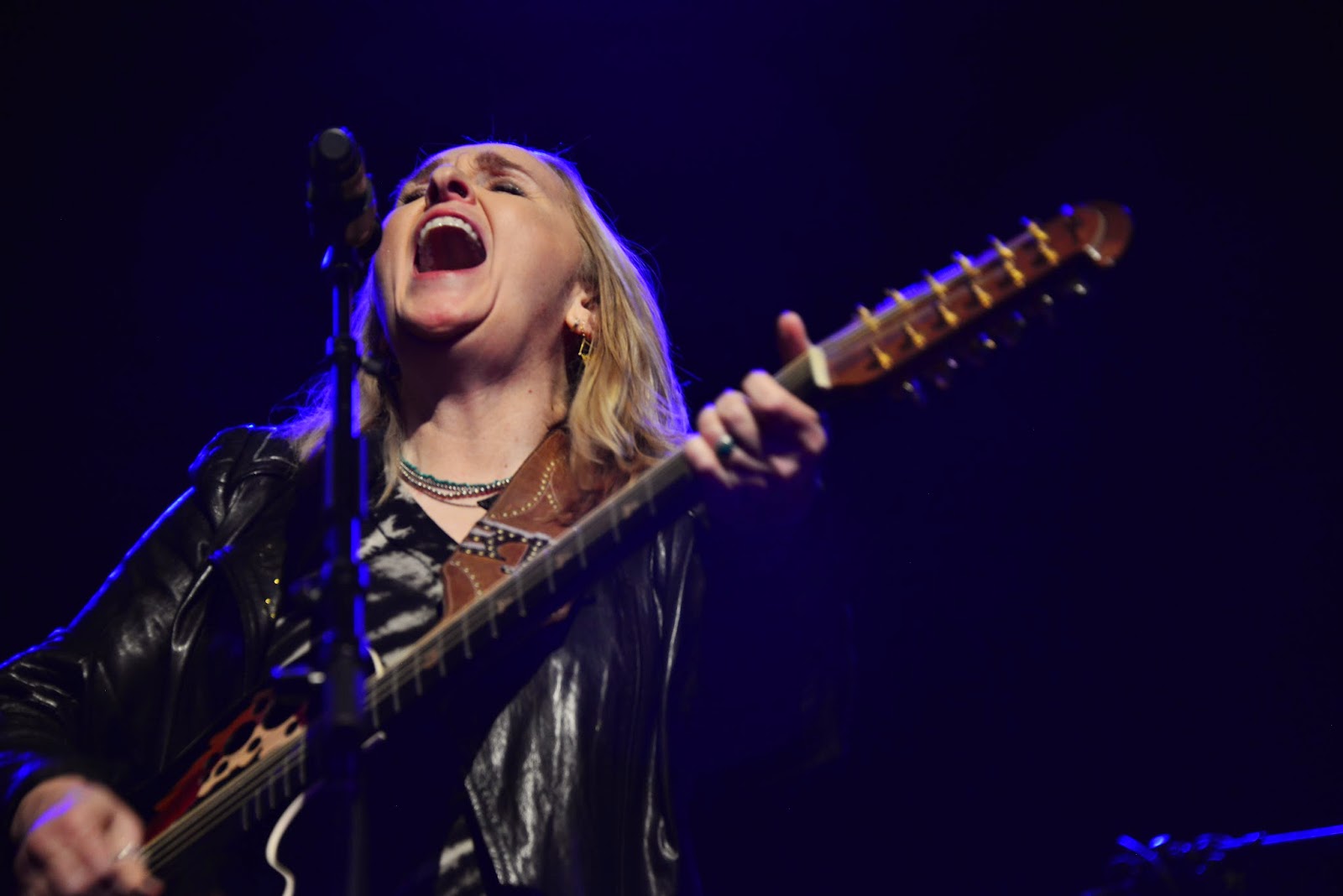 Etheridge brought on her old bandmates, Kevin and Felix (I think she said) to help her cover "Get Up, Stand Up", and believe me when I tell you, EVERYONE got up. Stood up. It was awesome, and then they played their jam from 1988, "Bring Me Some Water", which was equally well-received, with thunderous applause and whistling. 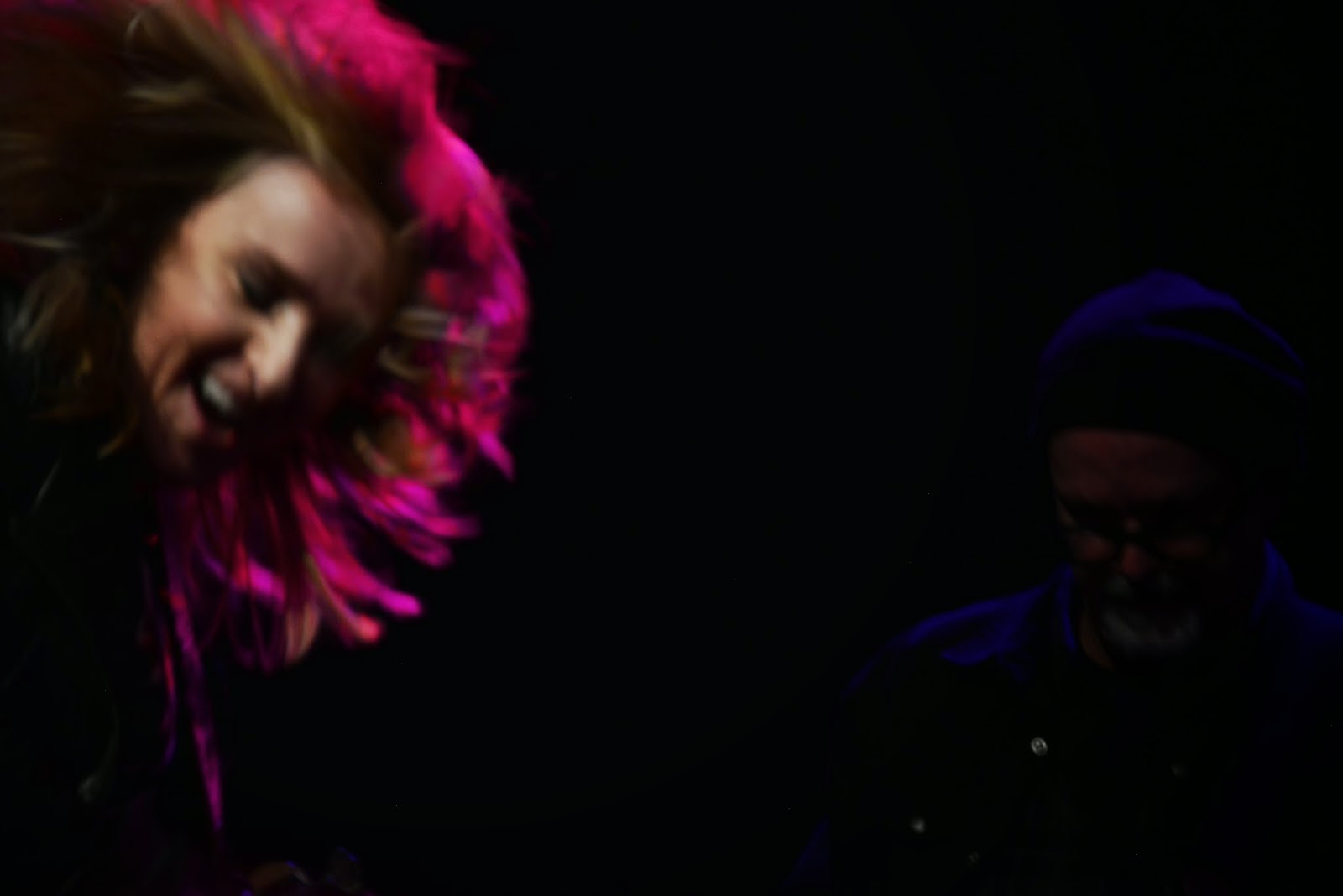 To introduce the next act, Etheridge confided that she'd originally thought of Jackson Browne as her sperm donor, but they went with David Crosby to be her childrens' "Bio Dad". 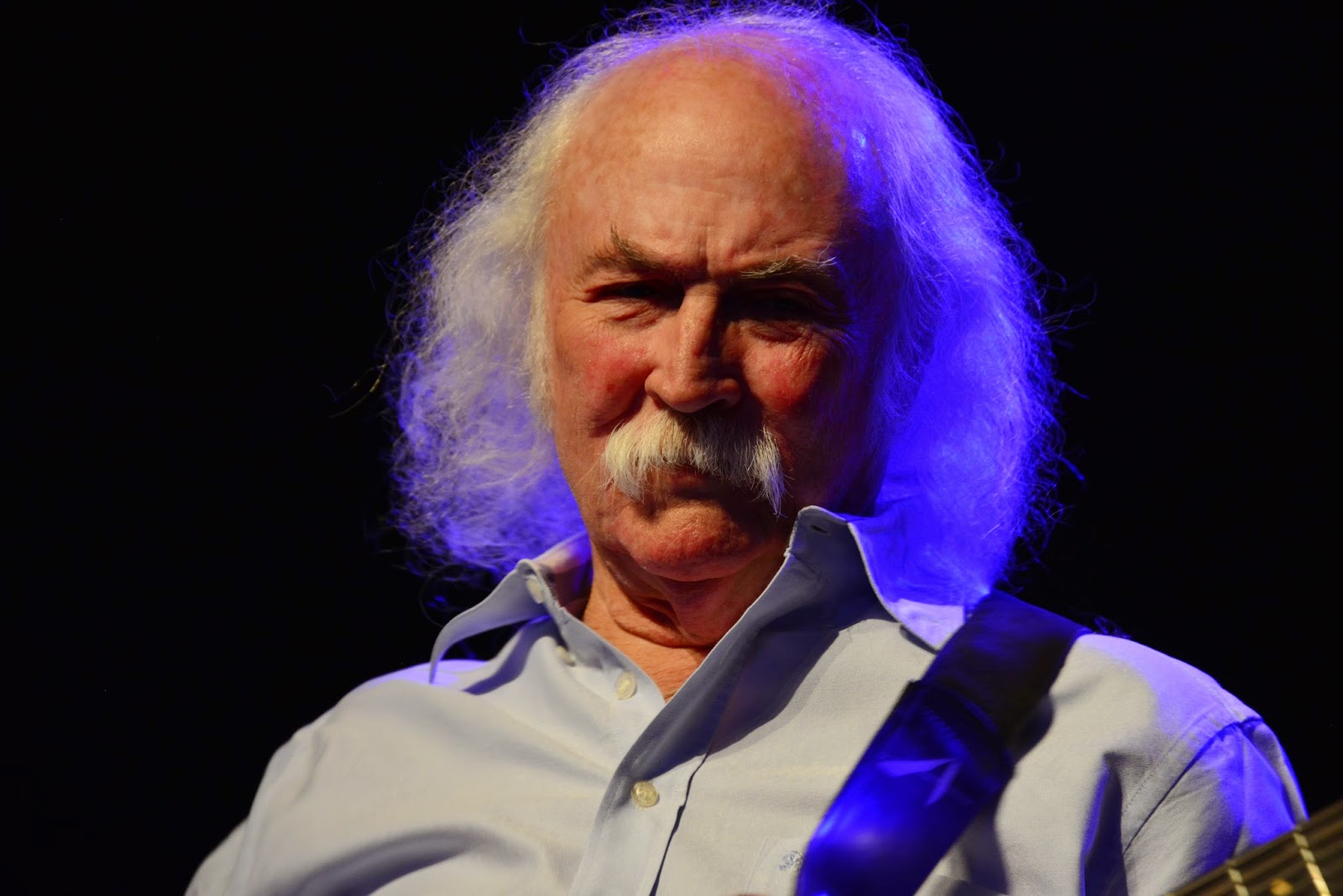 People went nuts when David Crosby and Graham Nash came out, and that's when I saw the exact same guy up and dancing on Monday at Arlo Guthrie, up and dancing on this night too. It was a big week for all the good old hippies - and those of us that want to be them - in Los Angeles, to be sure. They have long been outspoken on issues of social justice, and they opened with their perfect for the occasion, "Long Time Gone", and its verse that goes "Speak out you got to speak out against the madness, You got to speak your mind if you dare ..." Truth to power. Their gorgeous harmonies are still intact, and there were a whole bunch of stoked Baby Boomers in the house at that moment, trust me. 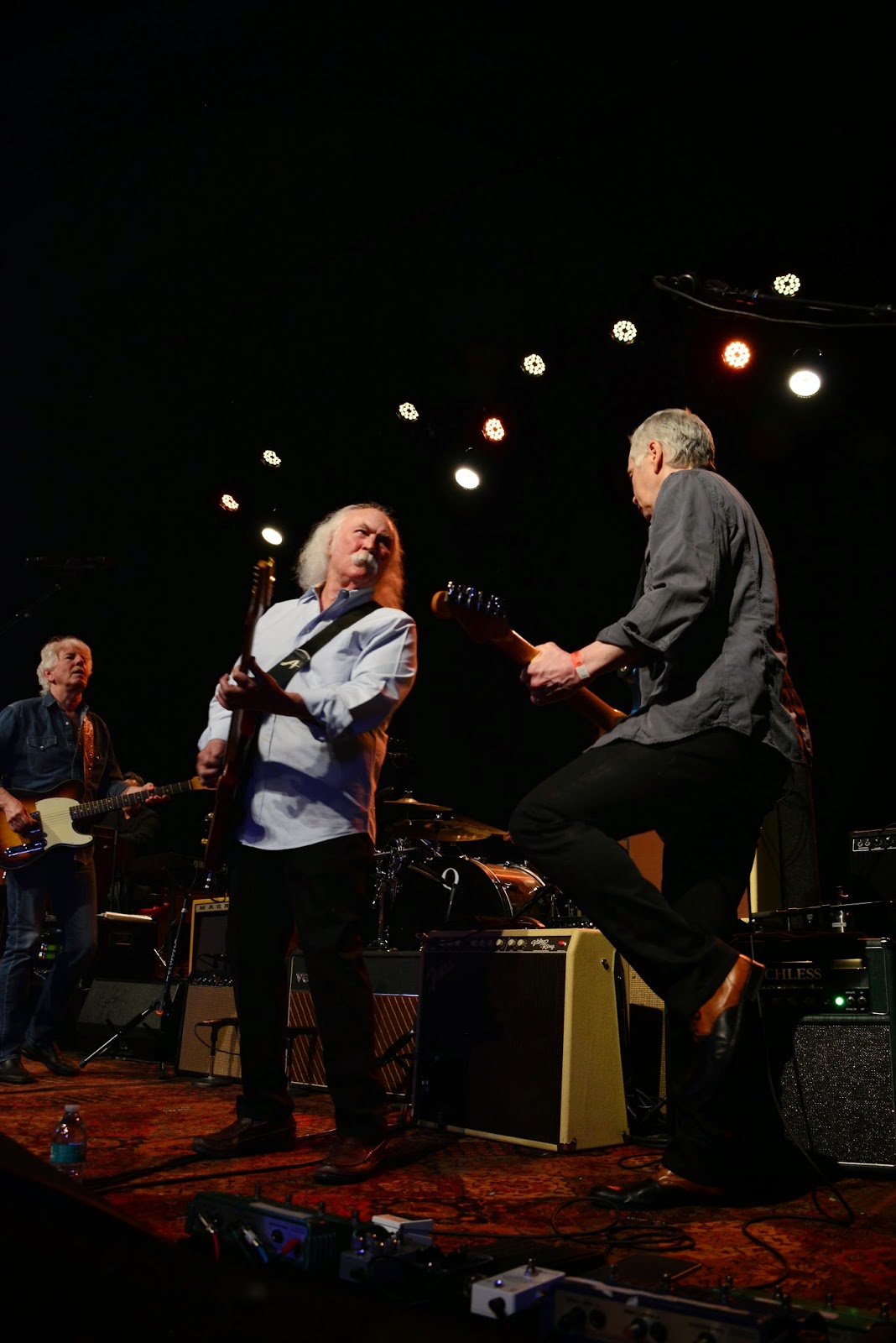 They followed that one with "Military Madness", again timely and classic. Nash took over the piano then for his truth speaking, "Chicago (We Can Change The World)", and the people loved it. Like arms in the air, swaying the whole time loved it. "We've been singing this one since the Civil War," cracked Crosby, "About something that just keeps getting worse." He was speaking about the people that run this country, and the wealth disparity, and they were singing a cappella, "What Are Their Names?" It was heavy, and again, extra true. 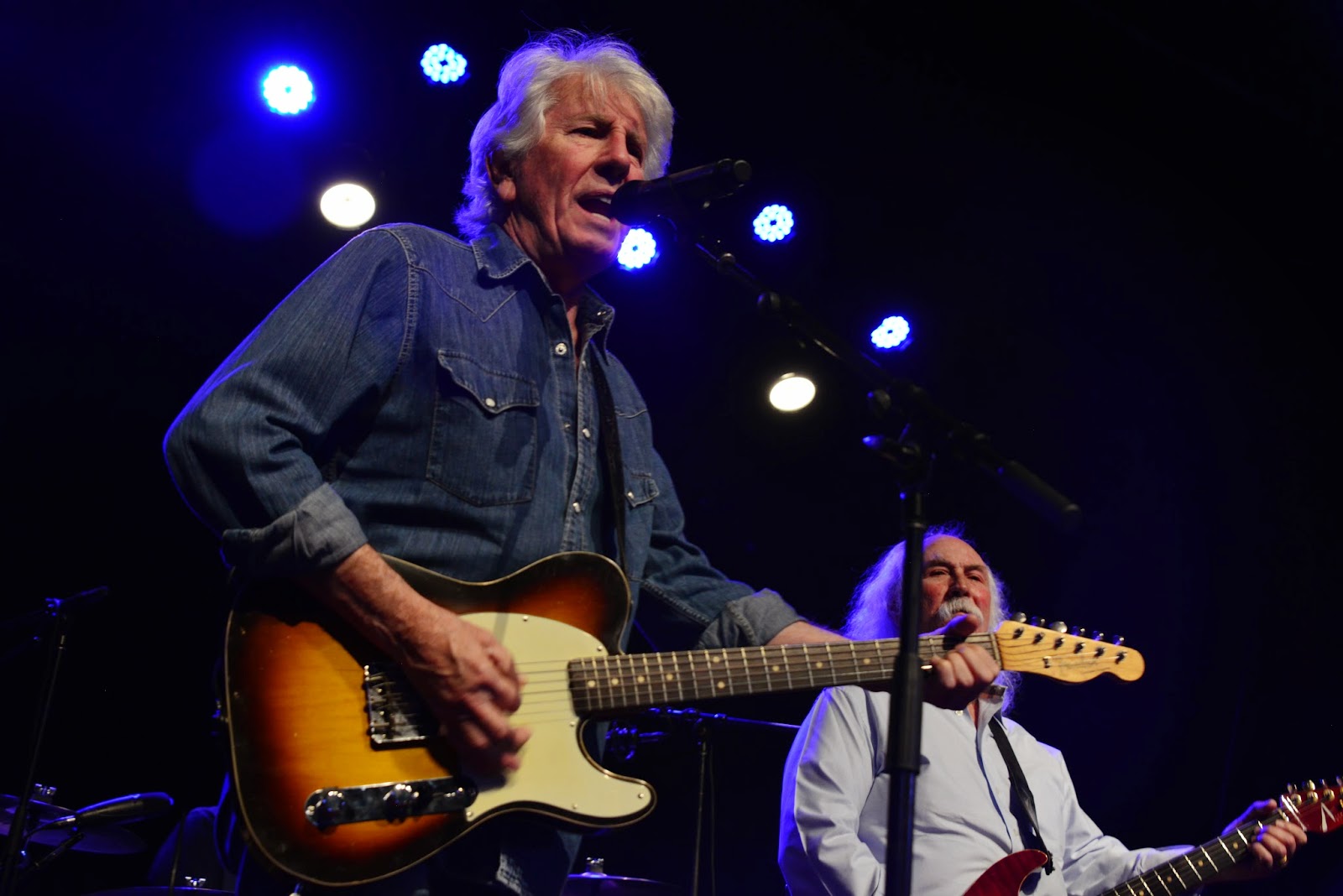 "It all starts with teaching the kids the right way," said Nash to introduce their classic hit, "Teach Your Children." Everyone with a voice sang along, and basically yelled the "And know they love you!" part. Hearts swelled. 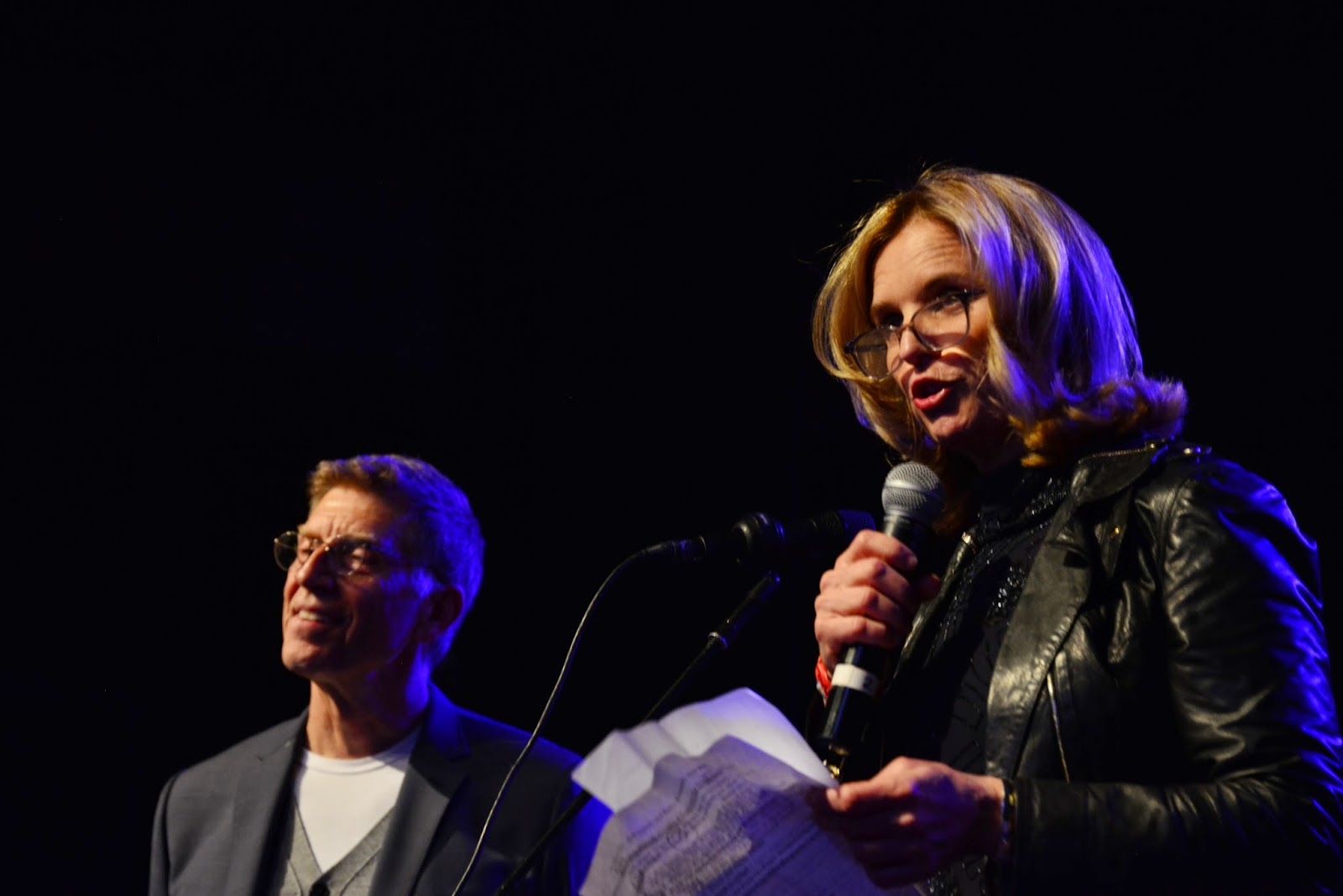 As they did again when Kerry Kennedy and Bob Santelli of The Grammy Museum introduced the winner of their "Speak Up, Sing Out" contest, a girl named Jade Rhodes from The Brentwood School. She wrote and performed a song called "Invisible", about what a refugee from Darfur might be feeling and thinking. She held the entire room's attention, the entire time, and a star just might have been born. People loved her and shouted their encouragement, as she shyly left the stage. It was great, and showed how important and special the work for social justice is. 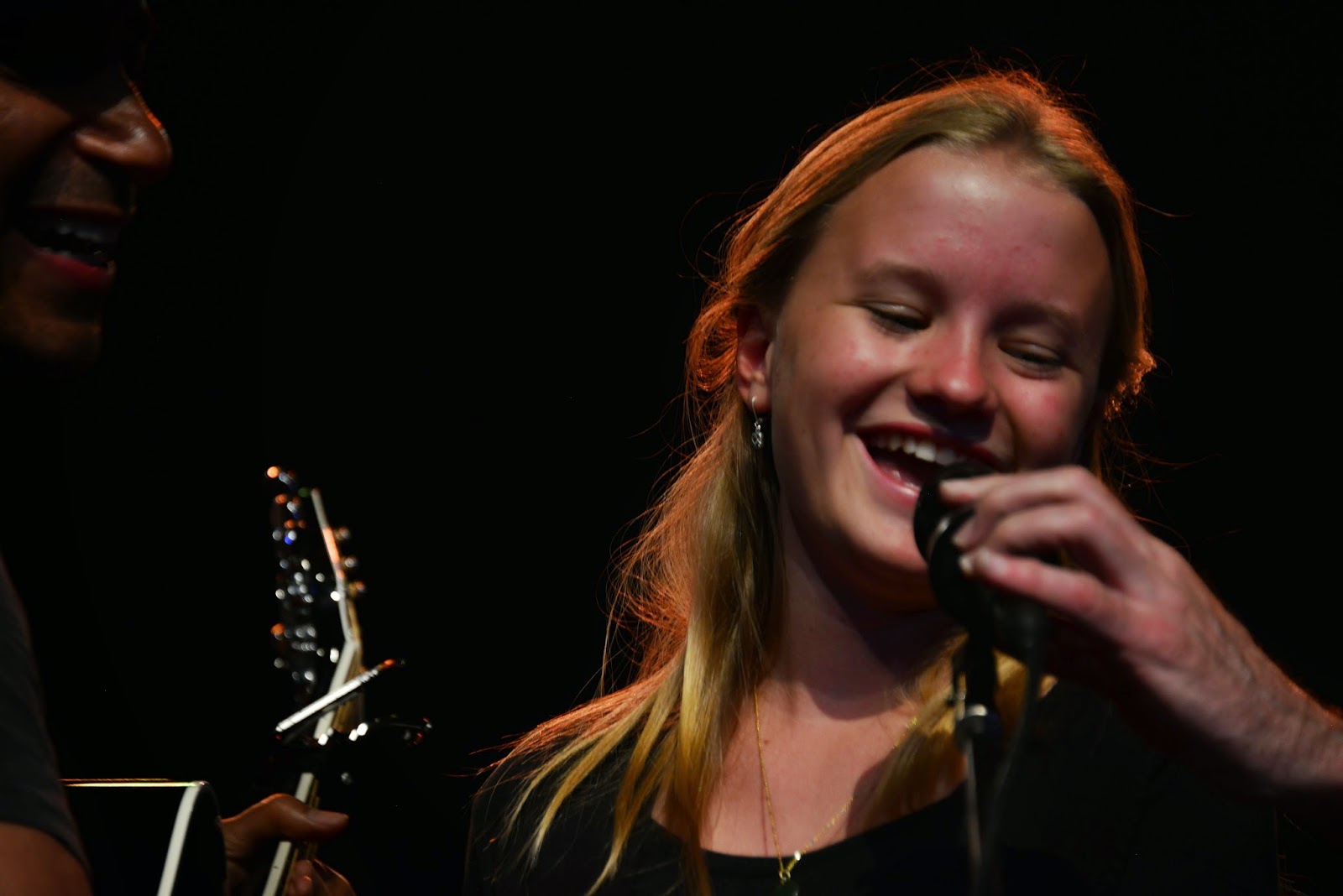 Kennedy said that when they were talking about the musicians they wanted for the concert, musicians who have dedicated their lives to singing - and acting - for social justice. "The first person I called was Jackson Browne, and he not only said yes immediately, he called his friends to join him." 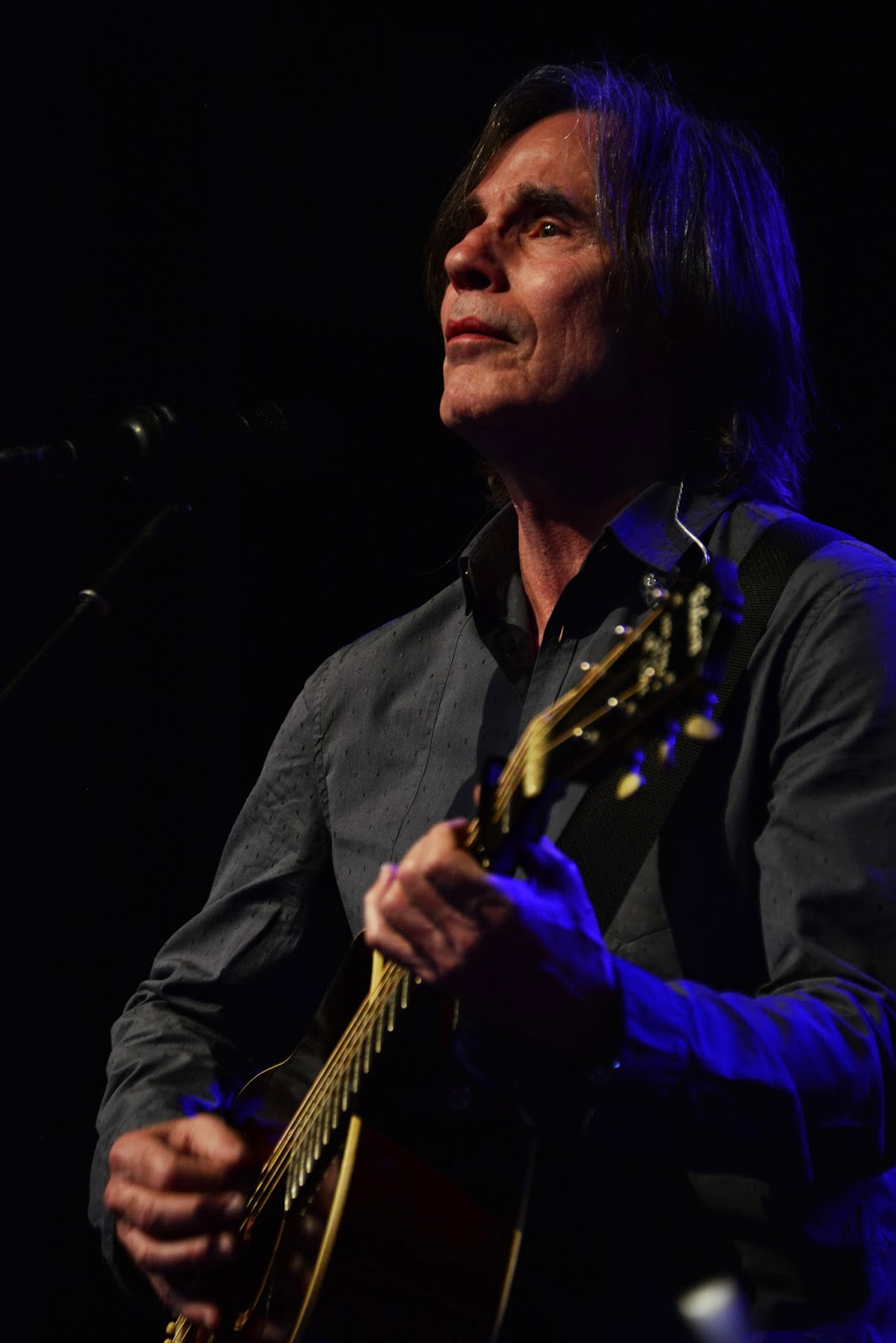 Out came Browne, saying just that, that he'd always just wanted to sing songs about social justice, and so he did. "Lives In The Balance" is just such a song. Listen to the lyrics and receive an education about unjust wars. Truth to power. "Far From The Arms Of Hunger" was no different, slow and lovely, but hitting as heavy as anything fast and hard. "Looking East" kept the wisdom and the beautiful music coming, and then he covered "I Am A Patriot" by Little Steven, and got the place dancing again with its slightly reggae beat. The faithful did not want it to end. 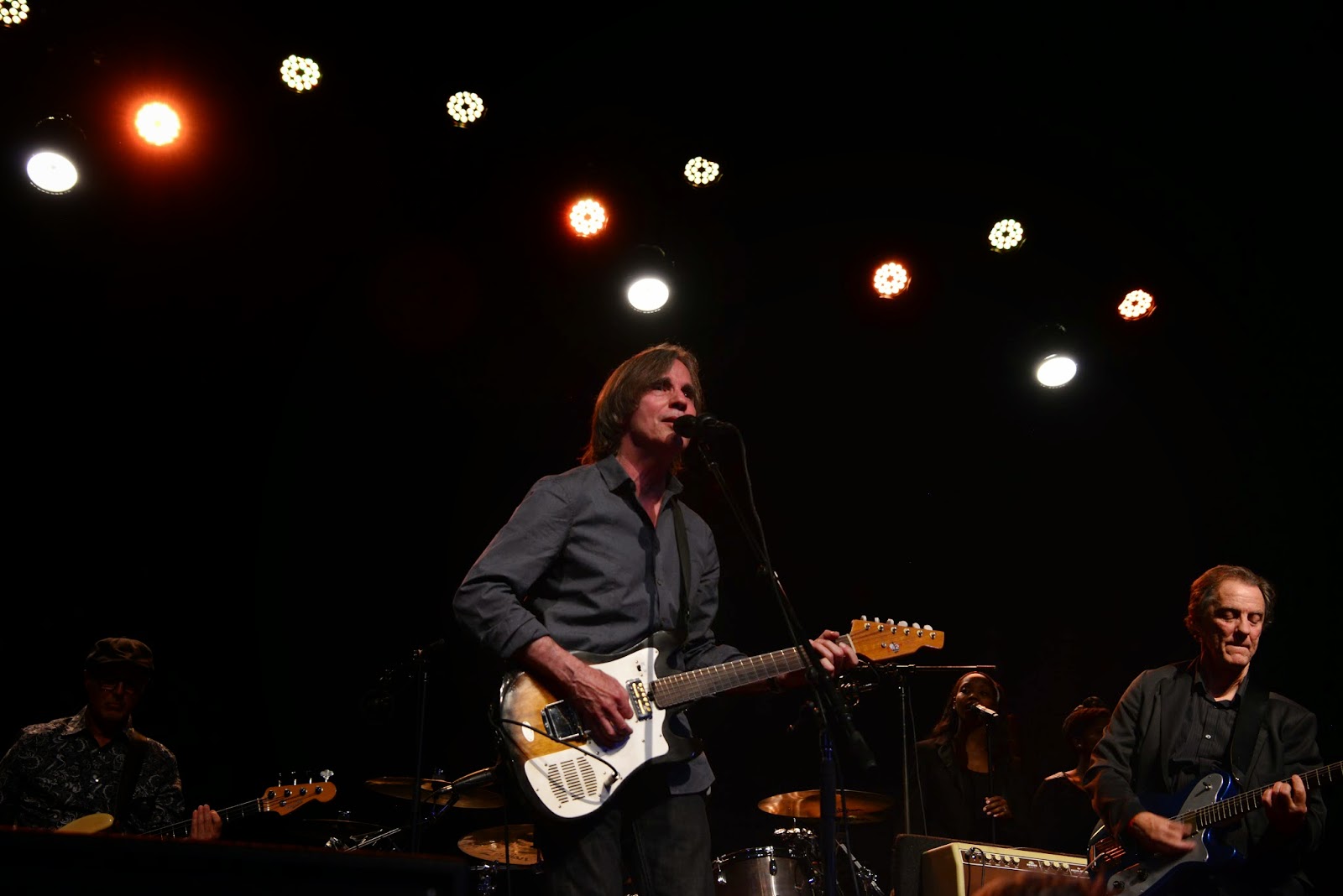 As always at a good social justice jamboree, you have to have an All Star Jam! As Morello is about the best ringleader in the world for these kind of things, he took the mic and said, "No Social Justice concert would be complete without a Woody Guthrie song to anchor that shit (Sorry, kids - the fight for social justice is not always PG13)! ... Whether you're of the Occupy Wall Street generation or the Aquarius generation ... This land is your land!" 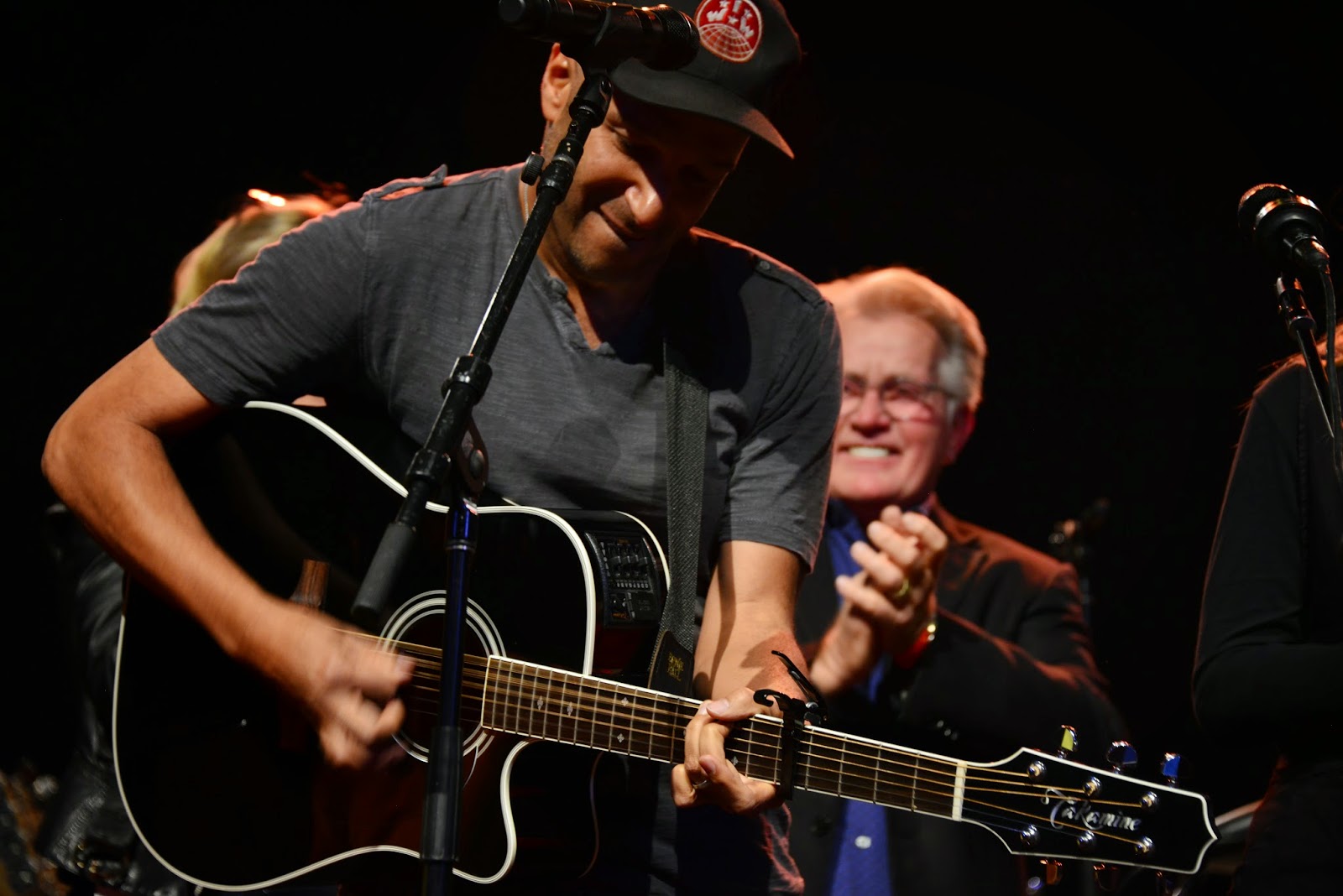 All the evening's artists returned to the stage (except I didn't see Crosby and Nash?) to belt out that "Alternative National Anthem" together as one. La Santa Cecilia's accordion player added a lovely touch to this version, and folks took turns singing the ALL the verses, including the previously censored ones. It was especially great when young Jade Rhodes got her turn to take a verse, happily sandwiched between Morello and Browne. I mean, C'mon! It was a night to remember for everyone, but probably the most for her. 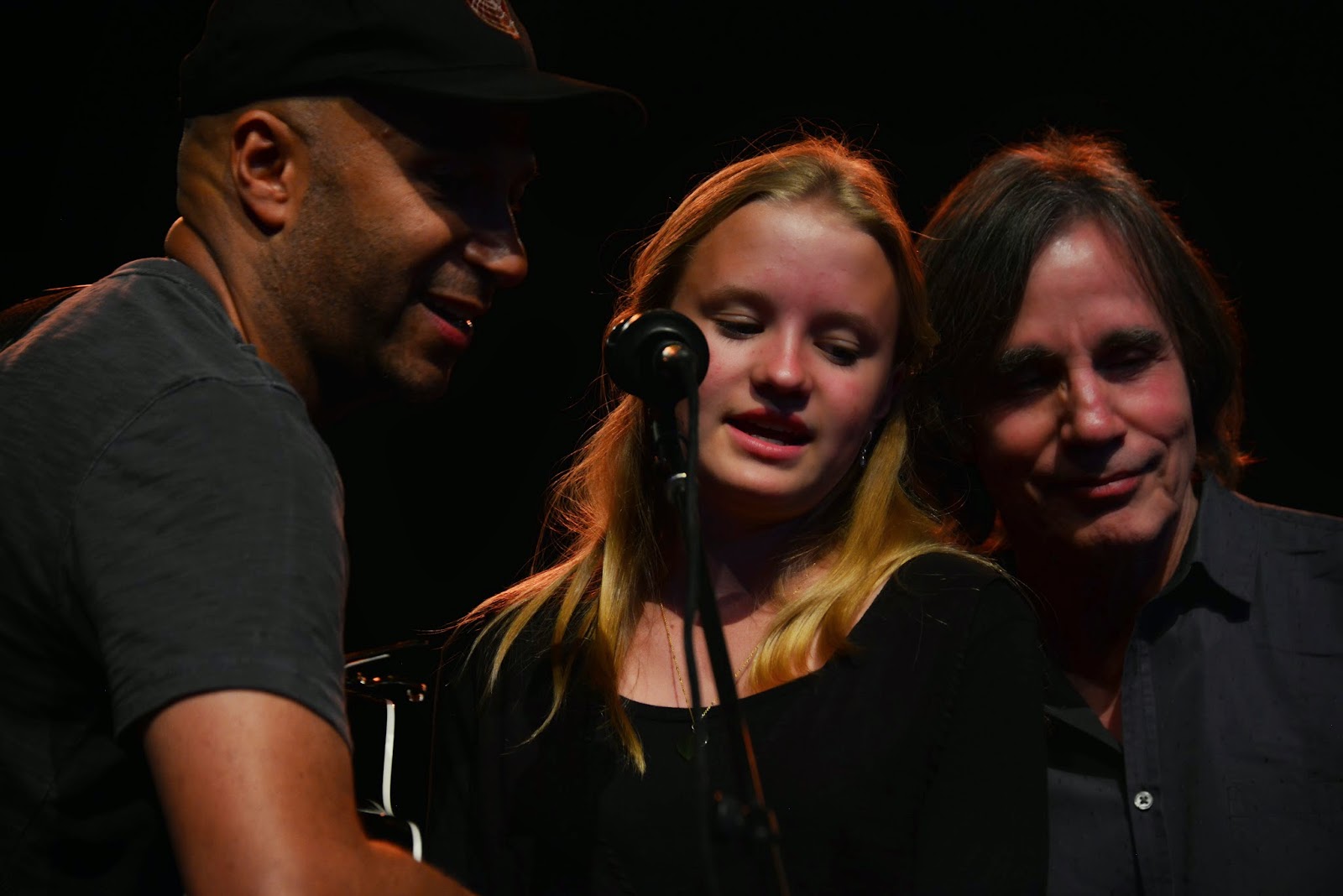 Morello called for the house lights to be turned up, so he could see that everyone in the place was standing up, singing "as loudly as it's ever been sung on Hollywood Boulevard to date" and jumping wildly up and down, "From the sound man to my 91 year old mom sitting right up there!" We stood, we sang, and we jumped for freedom, for justice and for rock and roll. 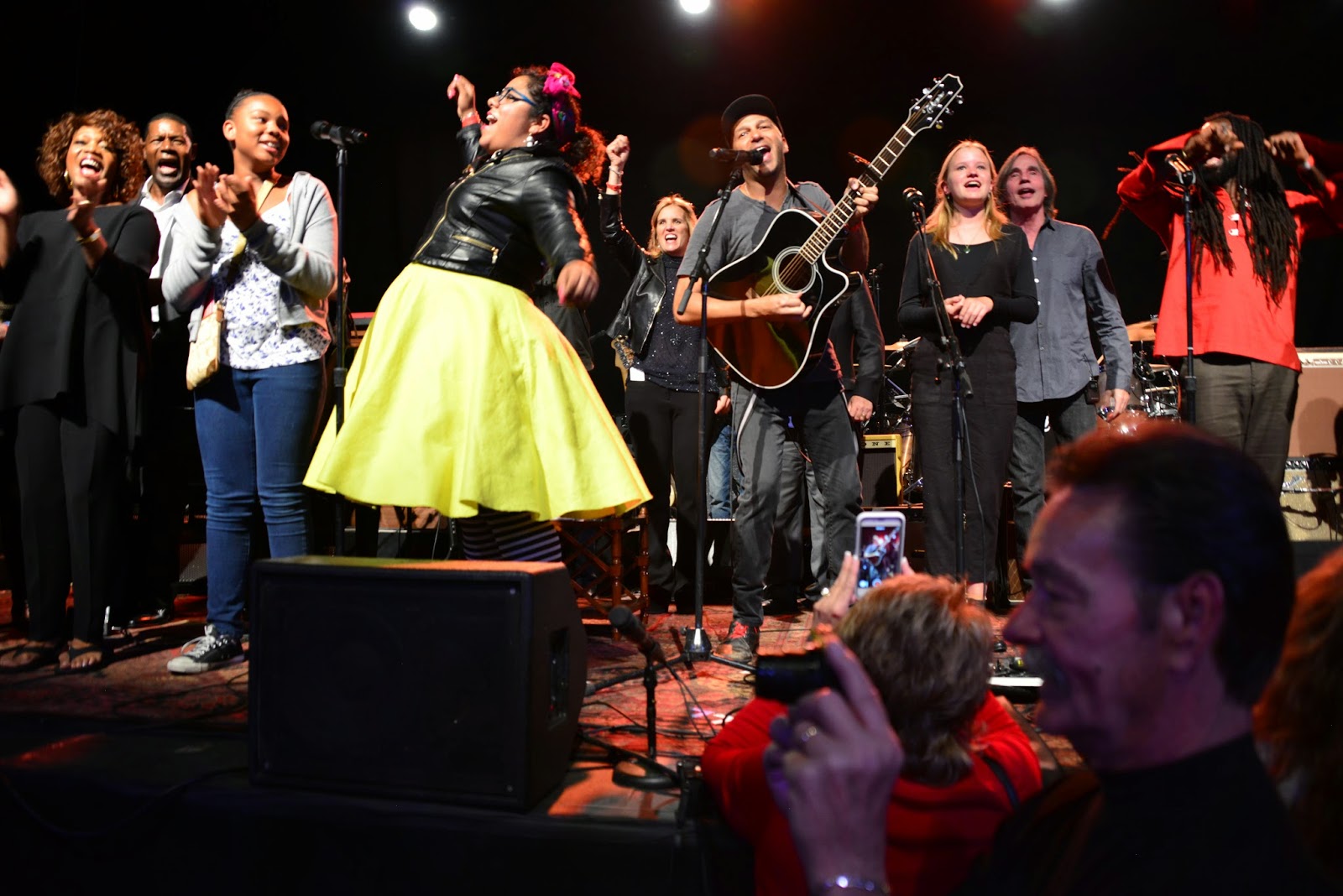