I was excited when invited to see Arlo Guthrie at Walt Disney Hall, because though I've grown up on his songs, I'd never actually seen him play them live. The audience filing into the wonderful room was clearly a room of Guthrie's own demographic, and they were all excited too. Really excited. You know it's going to be good when you run into Ramblin' Jack Elliott and Sarah Lee Guthrie backstage before the show even started. It was that kind of a show, like a family reunion in stories and song. 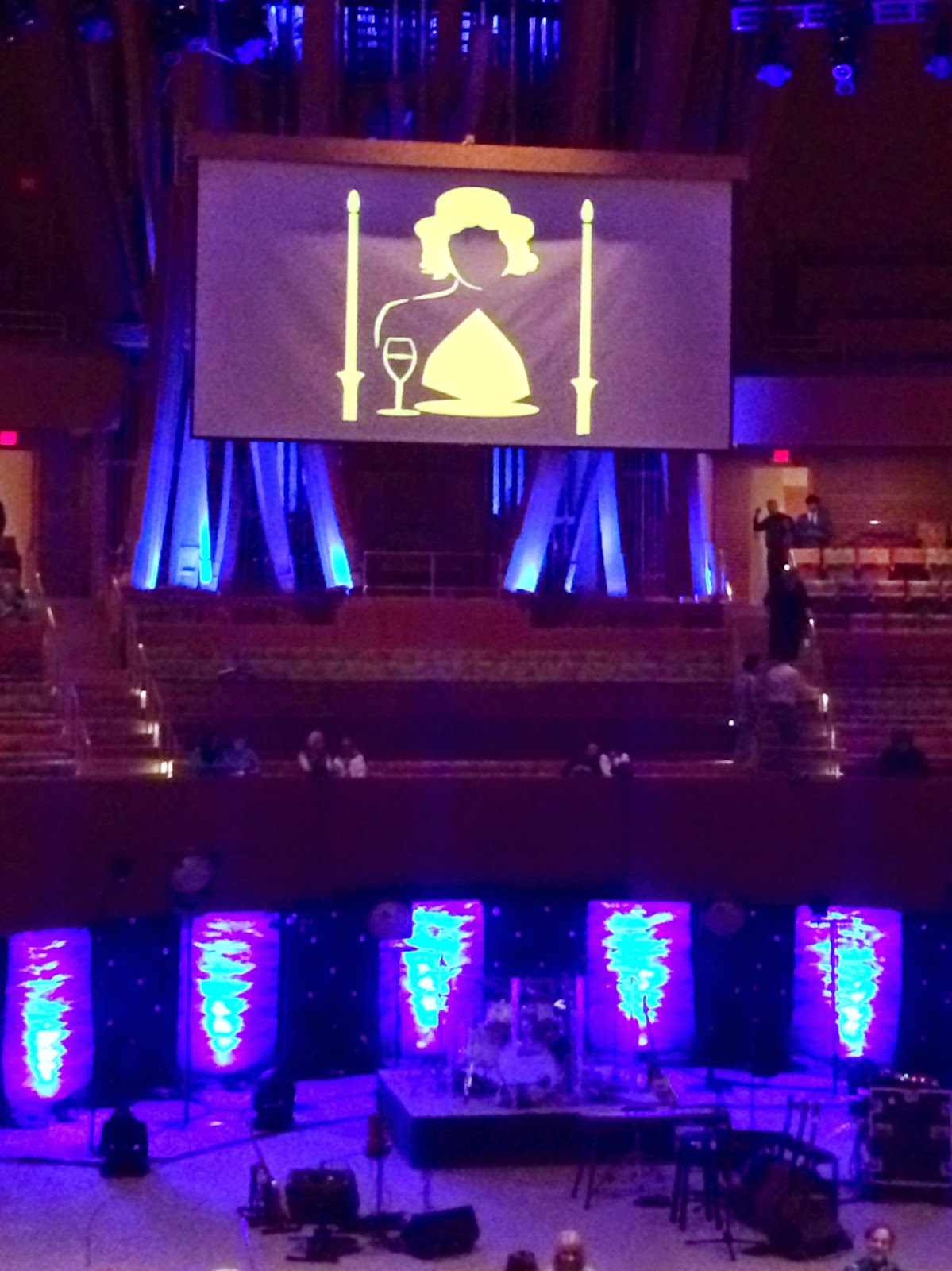 The show opened with a video of an animated pickle - yes, a pickle - riding along on his "motorsickle", that seamlessly became his band playing it live on stage beneath the screen, and then Mr. Guthrie joining them (to raucous applause) to be the pickle singing "The Motorcycle Song". He looked like a tall General Custer type, in a black Western shirt - groovy and commanding all at once. 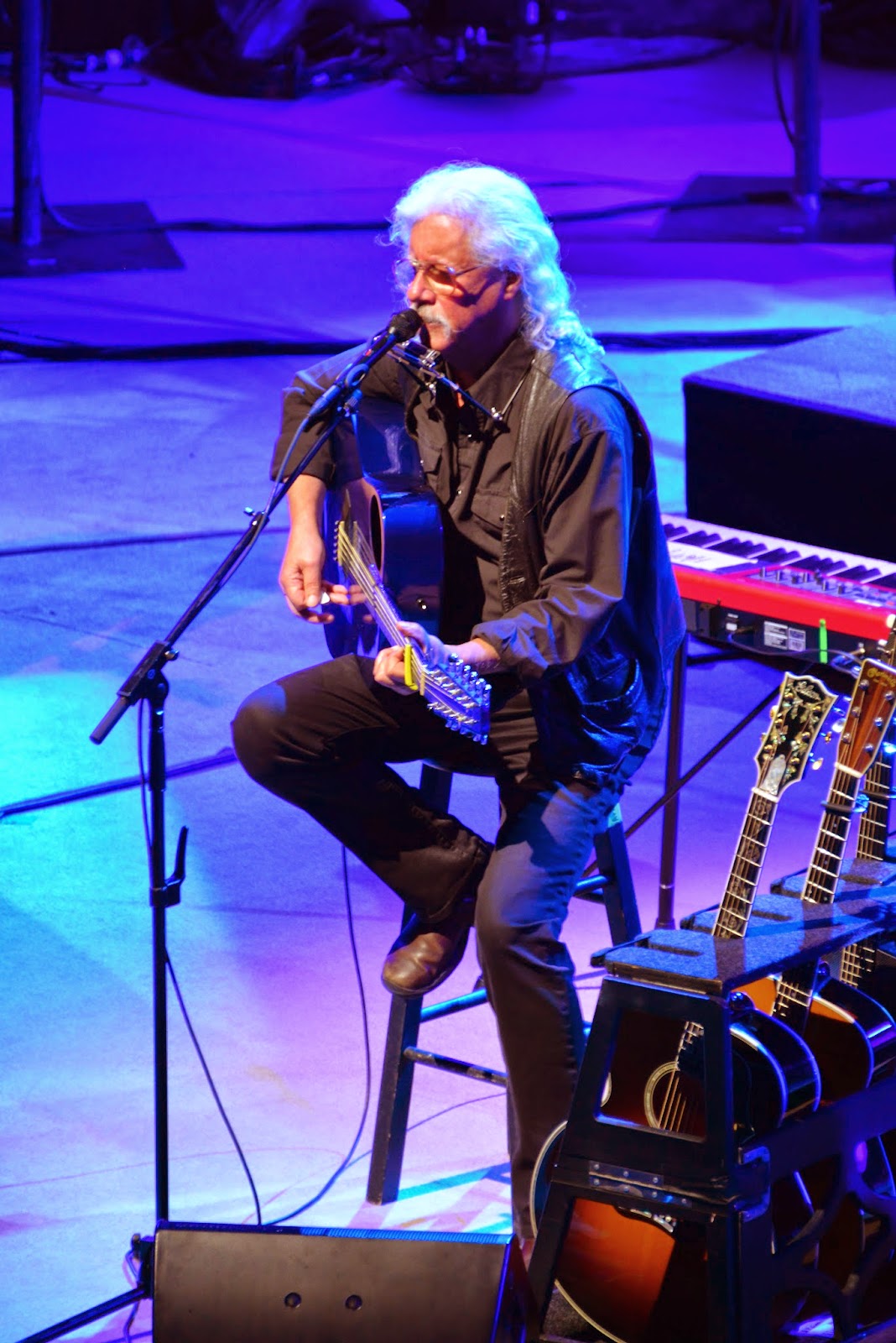 Everyone loved it, and at song's end, Guthrie said, "Thanks for helping us celebrate 50 years of stuff!" He went on to say that they'd lost that video for 40 years ("for good reason") and then wondered what to do with it when they found it. "Now we know." Guthrie introduced his band at the beginning, a group comprised of his friends and neighbors, and including his own son, Abe Guthrie. 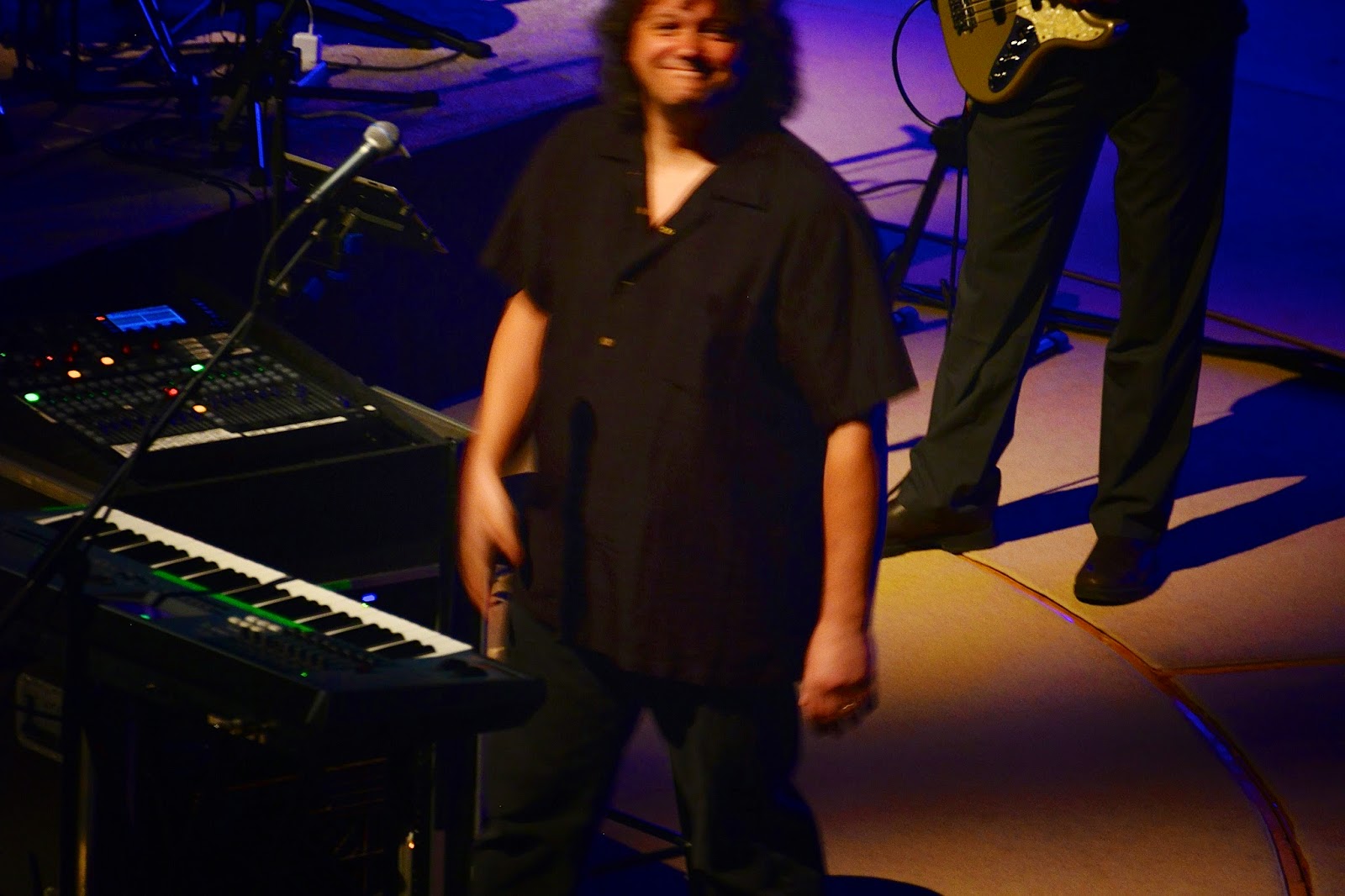 "We're gonna play a lot of old stuff tonight,"said Guthrie by way of introducing, "Chilling Of The Evening." That was more than fine by everyone in there (especially when Guthrie wailed on his harmonica). Old stuff because his vast catalog goes back fifty years, and Guthrie said when choosing songs for this tour, even if he'd picked only one from each album, we'd be here for a few days, "and that's just from what I can remember, 'cause you can't pick stuff you forgot." That brought chuckles, and knowing nudges between the also-grey haired majority of the crowd. "I love the old stuff," Guthrie said at the end of "Darkest Hour". We were all in agreement there.

As the tour is in its beginning stages, the set list is still being worked on. Guthrie said he was happy to include one by his father's (the wonderful Woody Guthrie, of course) best friend, Cisco Houston. "St. James Infirmary" was great, and featured an acoustic guitar solo by Guthrie that brought whistles from the people that know. 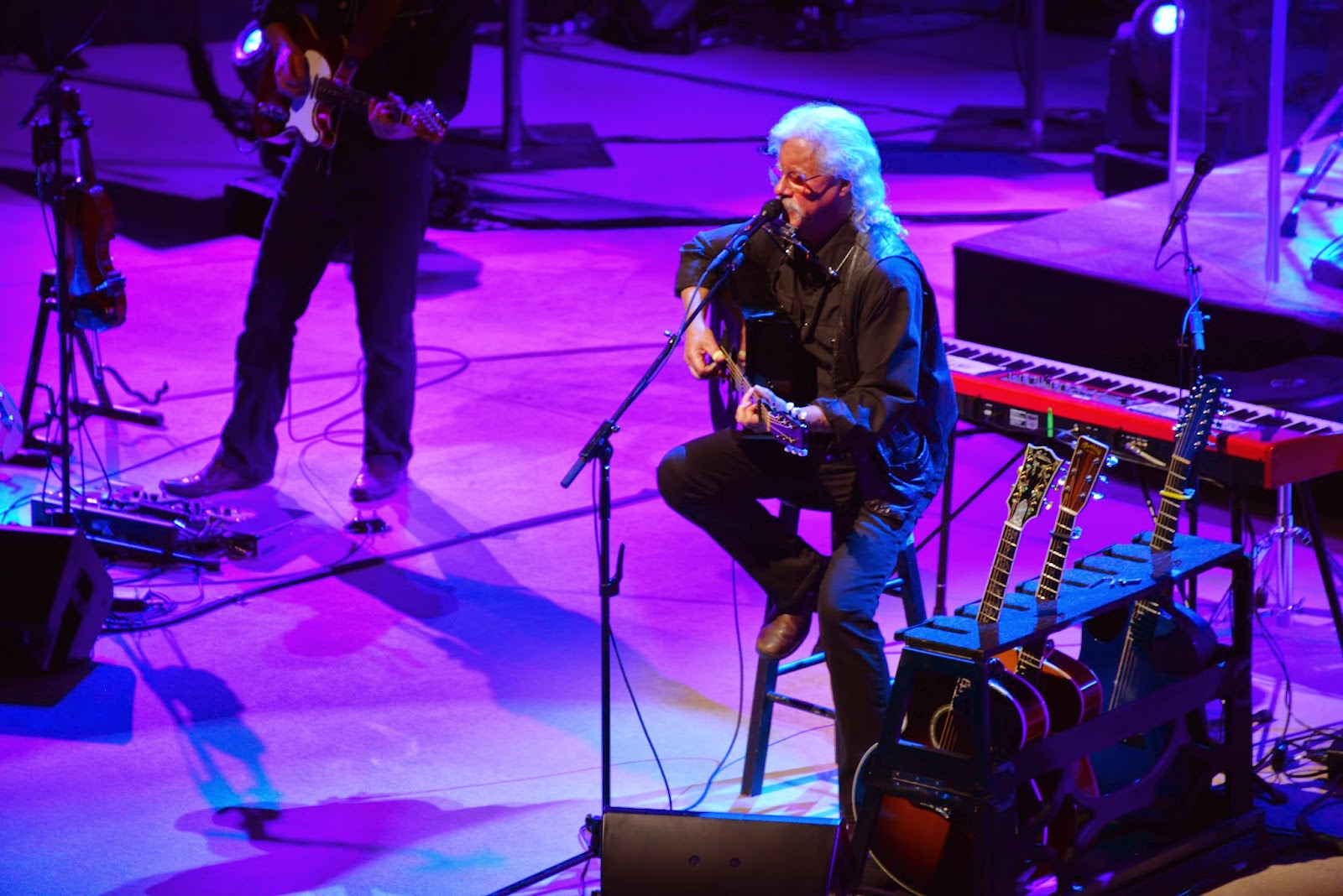 "On the off chance that there are some young people here ..." made people laugh, but Guthrie explained that he'd been "dragged to things like this when I was a kid ... but before there was recorded music, you had to go get someone to play ... play for getting married, getting buried, for getting hung, songs for kids ... but overnight songs for kids went to hell, they all had to be about building self-esteem, building character ... but these songs were not by someone that had actual, living, breathing kids! It's stupid. You want to scare 'em ... give 'em a reason to stay under the covers! This is for kids." While Guthrie then played the charming, "Me And My Goose" as the video for its children's book of the same name played on the screen. The goose gets cooked, and Guthrie said at its conclusion, "I know it's sick, but that's why I like it." And why we do too.

"My kids made a list of my songs I should know, and this is one of them," Guthrie cracked to introduce his "Last Train". Whereas his father's train was BOUND for glory (and his autobiography has that title), Arlo's is the LAST train. Hmmm. Either way, it was great, as was a rollicking, old Ledbelly tune, "Pigmeat". Guthrie met Ledbelly when he was two years old, and remembered that "If it made a noise, Ledbelly could play it." His early memory was of standing there holding Ledbelly's pants leg - "and that was about it." Guthrie's storytelling is as good as his playing, and both compliment each other beautifully. Ledbelly played the 12 string guitar, so Pete Seeger played the 12 string (in addition to and as often as his famous banjo). "Pete stole everything from Ledbelly, so I stole everything from Pete." 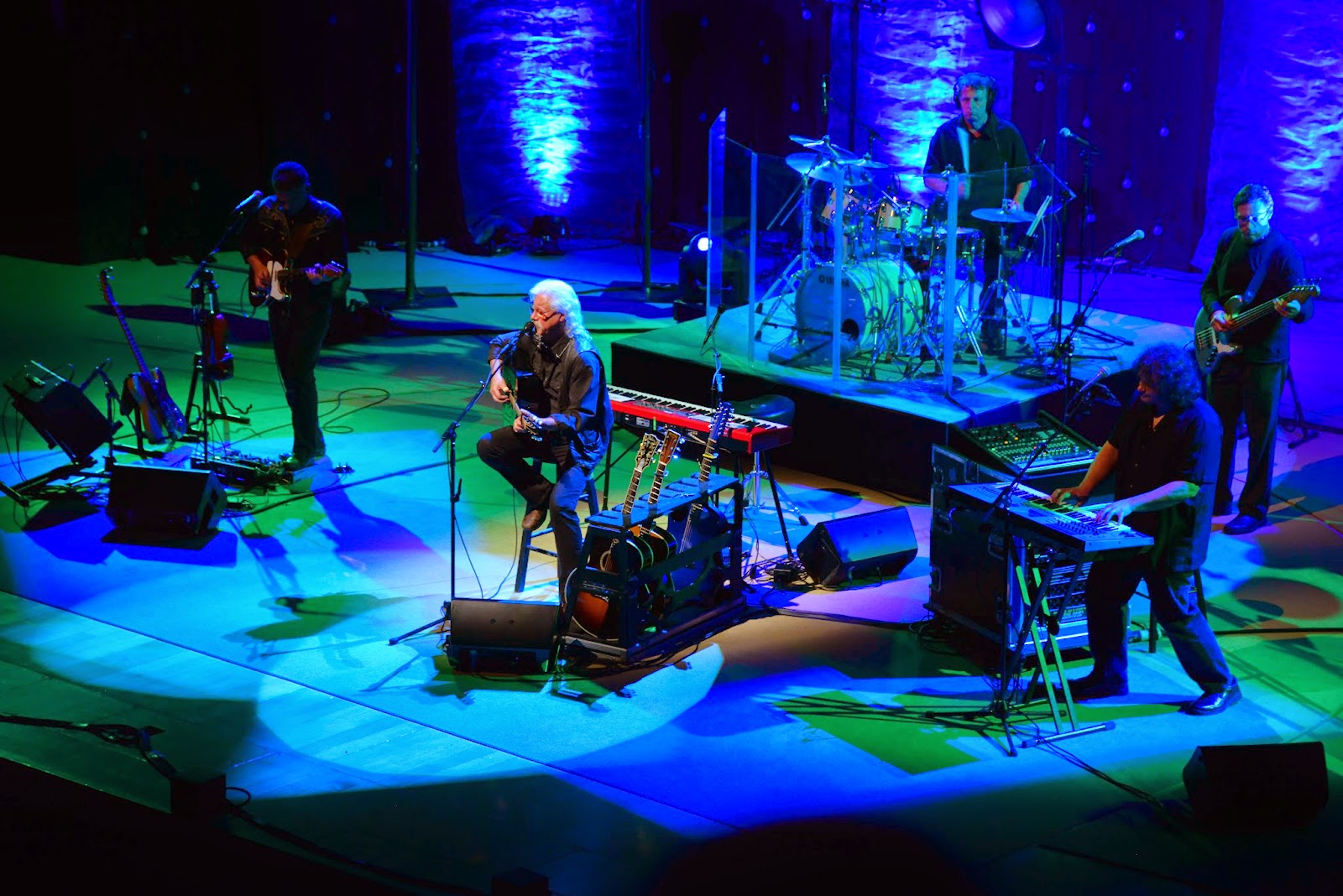 With friends like those growing up, and Wavy Gravy, and Ramblin' Jack, and the list goes on and on ... the stories are really something. Guthrie told his tale about Woodstock, and being flown into the venue by an open-doored chopper. Two policemen were on board with them, talking about how they'd never go down there with all them dirty hippies ... and that's when Guthrie knew it would be a good time. He wasn't set to play until the next day, so went off "and did what everyone else was doing." Suddenly the promoter told him it was his turn to play, "And I couldn't even talk! Or walk!" But he did play ... "At least that's what I remember". He took us back there with him when he launched into a rocking version of "Coming Into Los Angeles" ... a couple gals that might have really been at Woodstock were up and dancing for this one, but they were tame in comparison to a groovy old dude down front who was dancing all alone like he just didn't care, even in the staid Disney Hall. It was awesome. 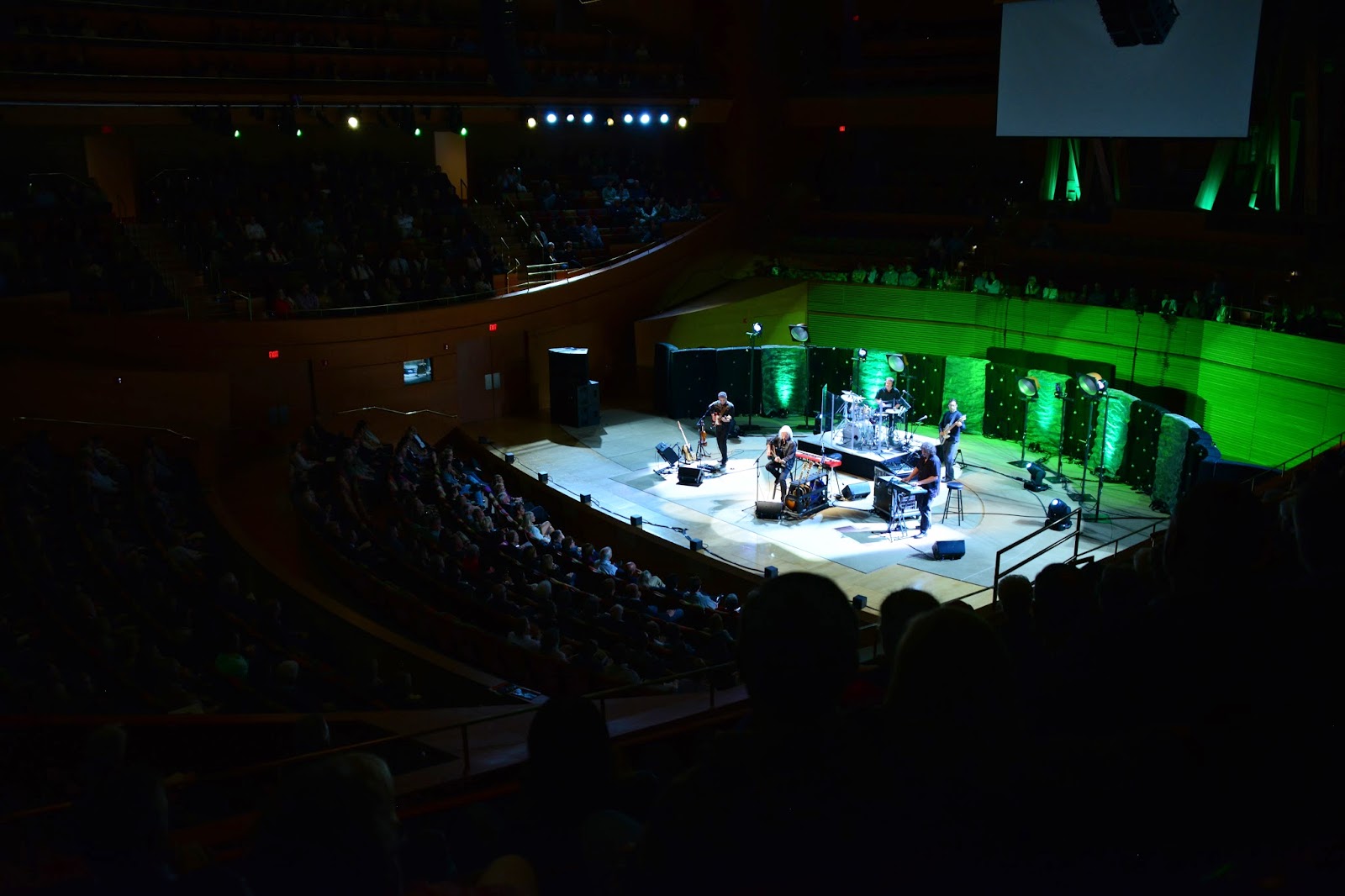 There was then a brief intermission before Guthrie came back saying, "You're still here?!", sounding surprised. Of course we were, because now it was time for the reason for the evening - the 50th Anniversary of "Alice's Restaurant". People clapped loudly just for the opening chords, prompting Guthrie to say, "Oh, you've heard this one before?" The 18 minute, 34 second talking song really put Guthrie on the map as a spokesman for social justice. The whole story (and accompanying film by Arthur Penn - that stars all the real people of the story, even the Officer Obie nemesis, who in real life became Guthrie's good friend) is all about how dumb justice (or the lack of it) can be sometimes. Some well-meaning kids help a friend dump some trash, get busted for littering, get drafted and have to go with hardened criminals ("These weren't Mother rapers, they were FATHER rapers!" - I've never even heard that phrase!) because of the arrest ... and all they were trying to do was be cool on Thanksgiving. People sang and laughed along throughout, and as Guthrie said, when you get enough people together singing the same song for justice - it becomes a movement. "We can change the world! So sing it loud enough that it's worth correcting in the first place." The last strummed chord brought people to their feet, and the building was tangibly rowdier. It was again awesome. 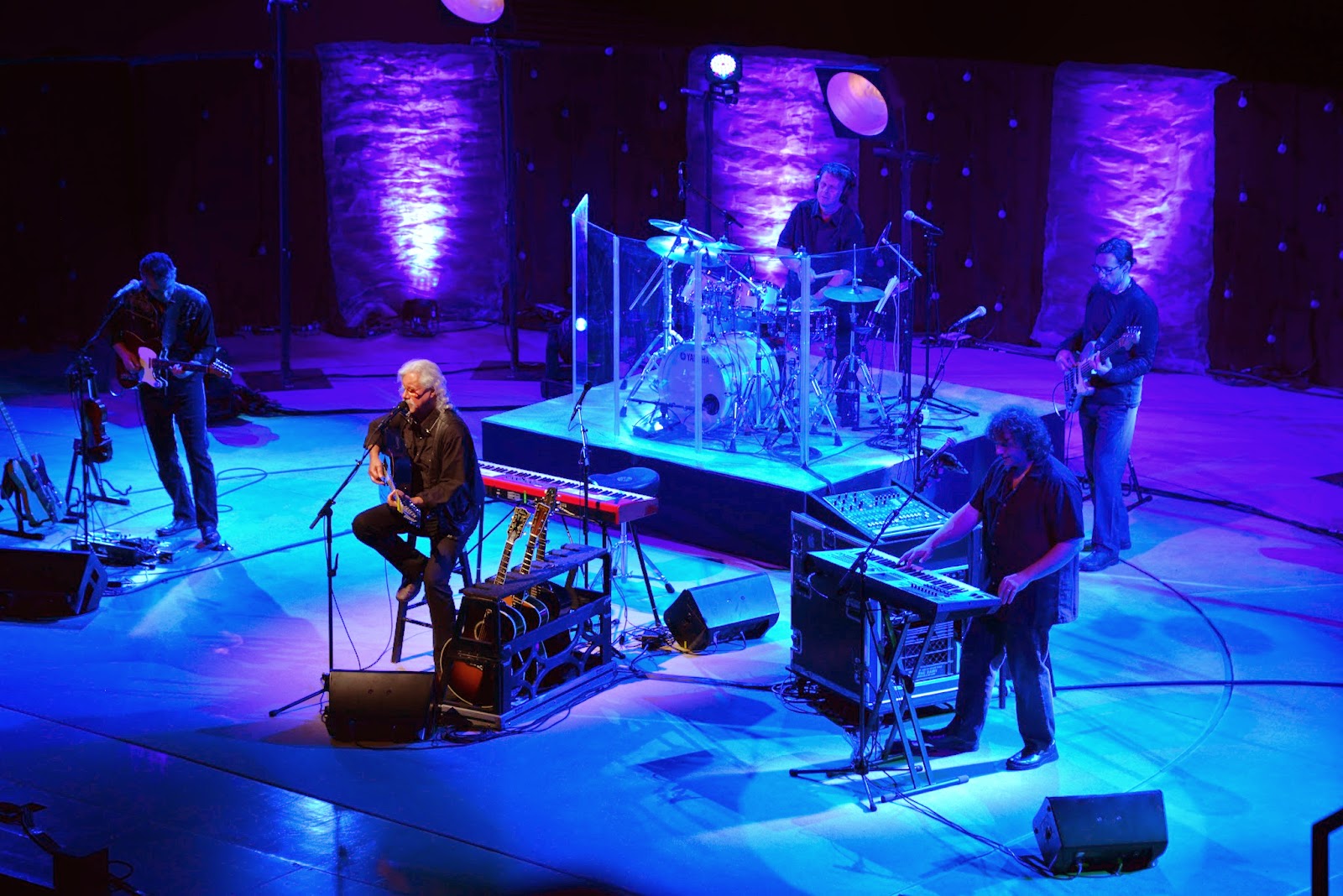 "When A Soldier Makes It Home" was a lovely tune, but sad too, because it talked about how people didn't care that they were home. It unexpectedly choked me up, because when you think about it, isn't that all ridiculous too? That people would go fight for someone else's idea of a war, and then make it home and be mistreated for it? UGH ... it's all just ridiculous. Thank goodness for people like Guthrie that tell truths, and do it in a way that you don't even realize until it hits you.

Guthrie explained that his sister, Nora Guthrie, has been compiling all their father's work, and as there was so much of it, many of the lyrics found didn't have music. She gave some of those songs to different artists to put them to music, and Guthrie then played us Janis Ian's version of "My Mother's Voice". I, of course, choked up again listening to him sing about hearing his Mother's voice one more time. In a family where everyone is musical, you can imagine how lovely hers must have been, while treasuring the voice of your own in your mind. A special song, for sure. 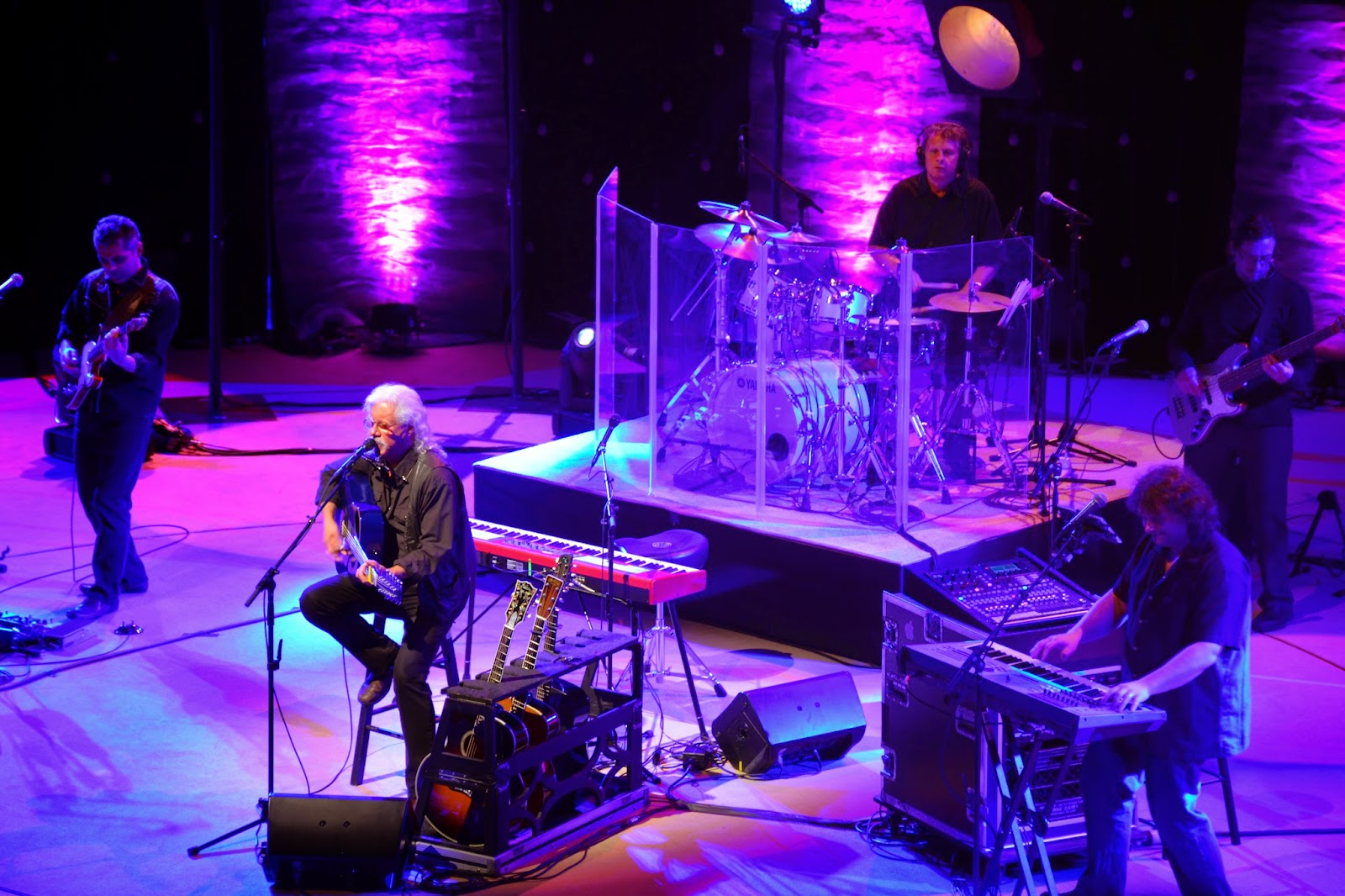 People LOVED "City Of New Orleans", and Guthrie told about how its writer, Steve Goodman, actually wanted Guthrie to get it to Johnny Cash. Cash passed as he already had a bunch of train songs, "So that worked out well for me." The whole place sang along with the "Good Morning, America, how are you?" chorus, and I think it took everyone back to the sunny day when they first heard it, wherever they were. There was certainly a lot of nodding along and toe tapping to let you know people were feeling it.

One day, friends of Woody Guthrie, Brownie McGhee and Sonny Terry, asked young Arlo to open for them on their West Coast tour. Guthrie's mother said he had to stay with friends or family, and that meant Ramblin' Jack Elliott. Guthrie was thrilled, as he knew what kind of trouble Ramblin' Jack could get into. Immediately upon arrival in Malibu, Elliott took Guthrie to a rodeo, where he saw the prettiest girl he'd ever seen. She totally ignored him, so Elliott gave him some kind of pill to cheer him up, saying, "Don't worry, it will wear off!" When it did, he went to The Troubadour, where the same pretty girl was working as a cashier. She paid him enough attention then to marry him, have his children, and "put up with me long enough to celebrate our 43rd wedding anniversary in 2012." As it's 2015, that suddenly let us know that she was gone, and as the slides played on the screen of Guthrie's beautiful, happy wife Jackie ... this time actual tears sprang to my eyes when Guthrie said, "This is for her," and played "Highway In The Wind". It was a truly beautiful memorial to her. 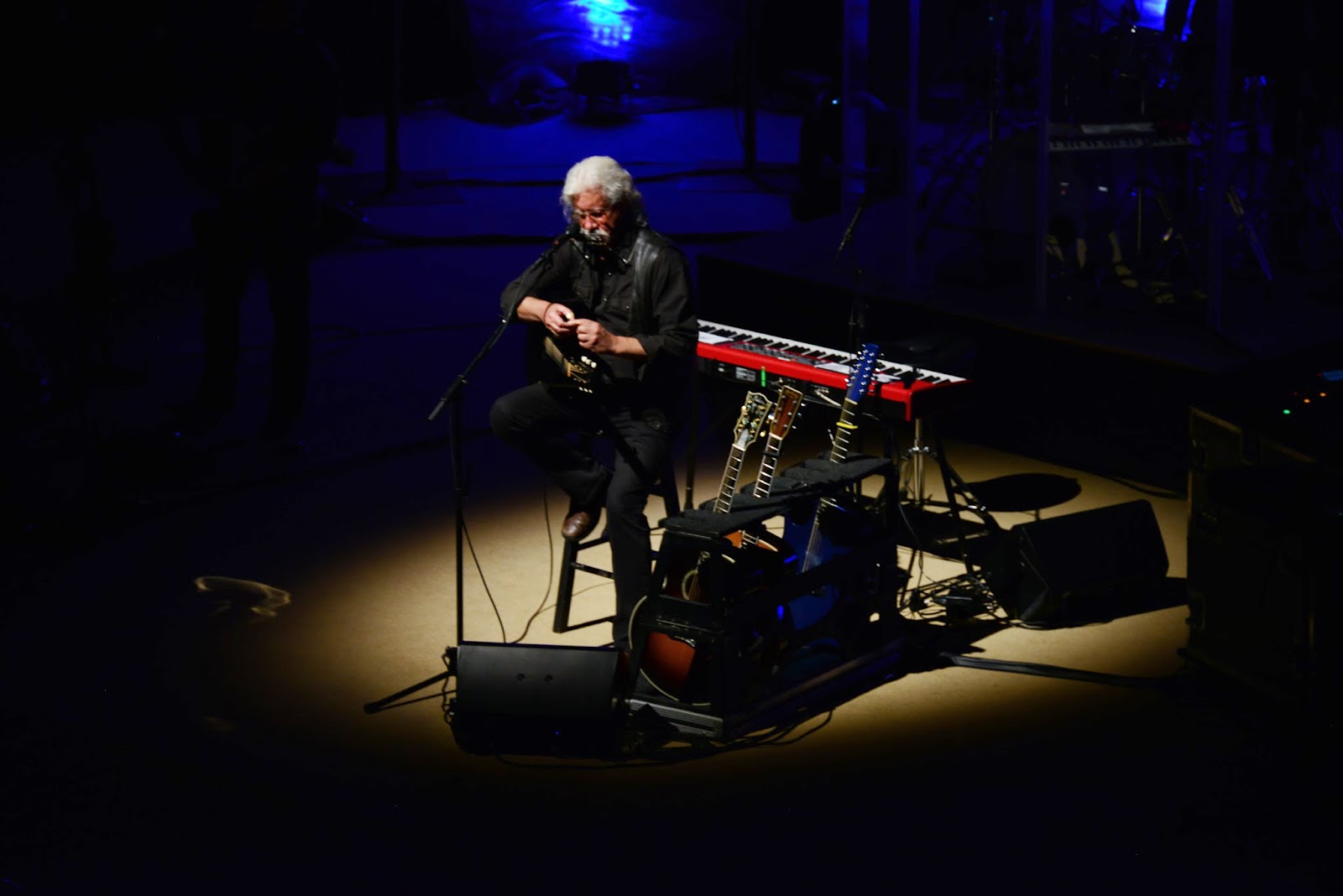 One of the few songs that Woody Guthrie actually taught Arlo himself was his seminal wonder of a song, "This Land Is Your Land."  We've all sung that classic a million times, but as Guthrie explained it, a piece of you is left with it each time it's sung, making it all the more meaningful. Like when you visit a place that an event happened and everyone goes there to see it, you leave some of yourself there, making it even more of a special place. As we all sang it together again, with the son of its writer, it indeed felt special. Also because of the massive standing ovation Guthrie again earned for it. 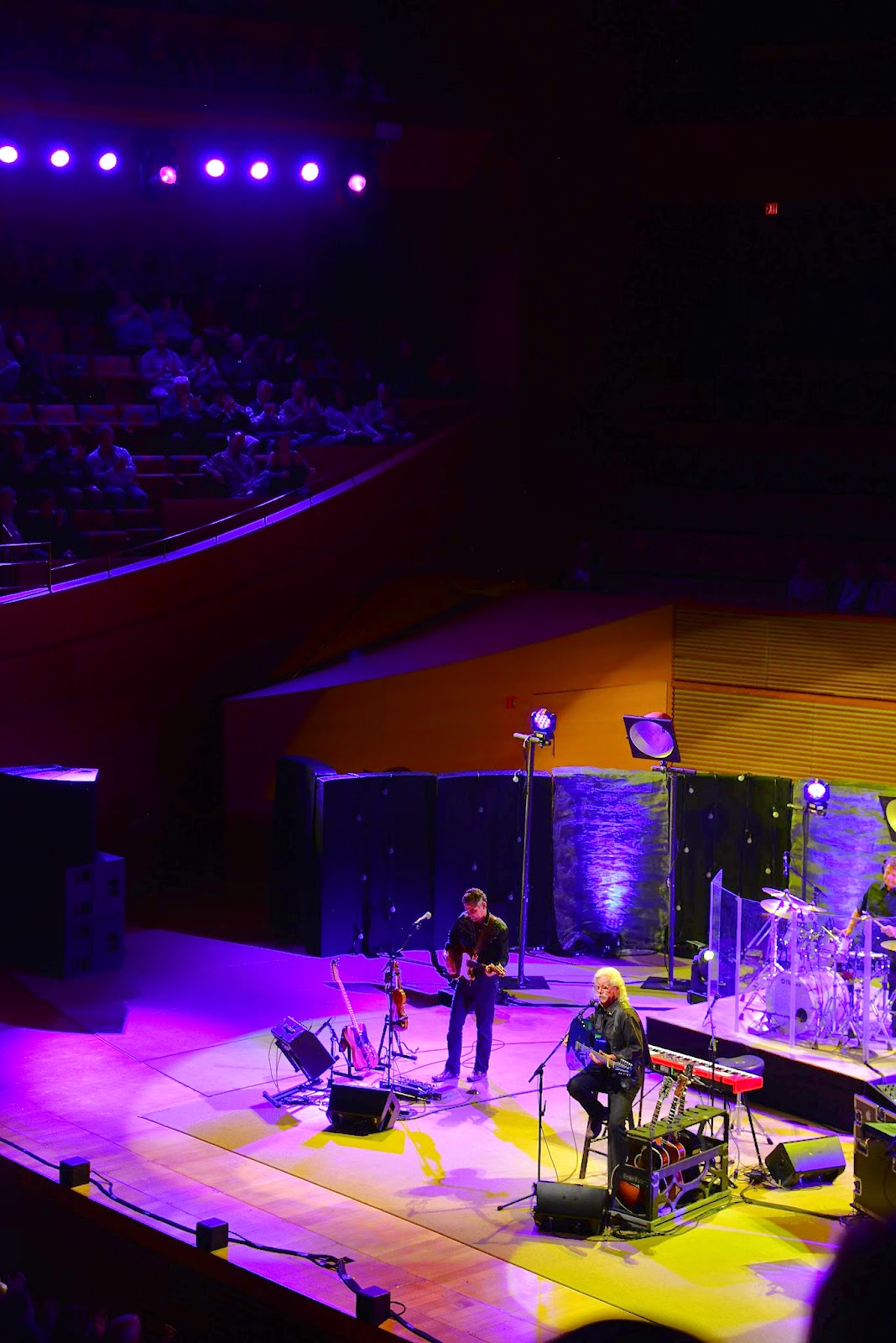 When speaking of his father, Guthrie is appropriately reverent, but also funny. He told of how Woody read and was very affected by John Steinbeck's The Grapes Of Wrath, which inspired him to write "The Ballad Of Tom Joad." Steinbeck wrote him a letter after hearing it, kind of mad that Guthrie was able to distill his entire novel into 12 lines! The Steinbecks and The Guthries are all good now, even intermarried, and Guthrie told more tales of their family together, hanging out in a mental hospital with Woody, having parties, making the best of it. You really could sit and listen for days. 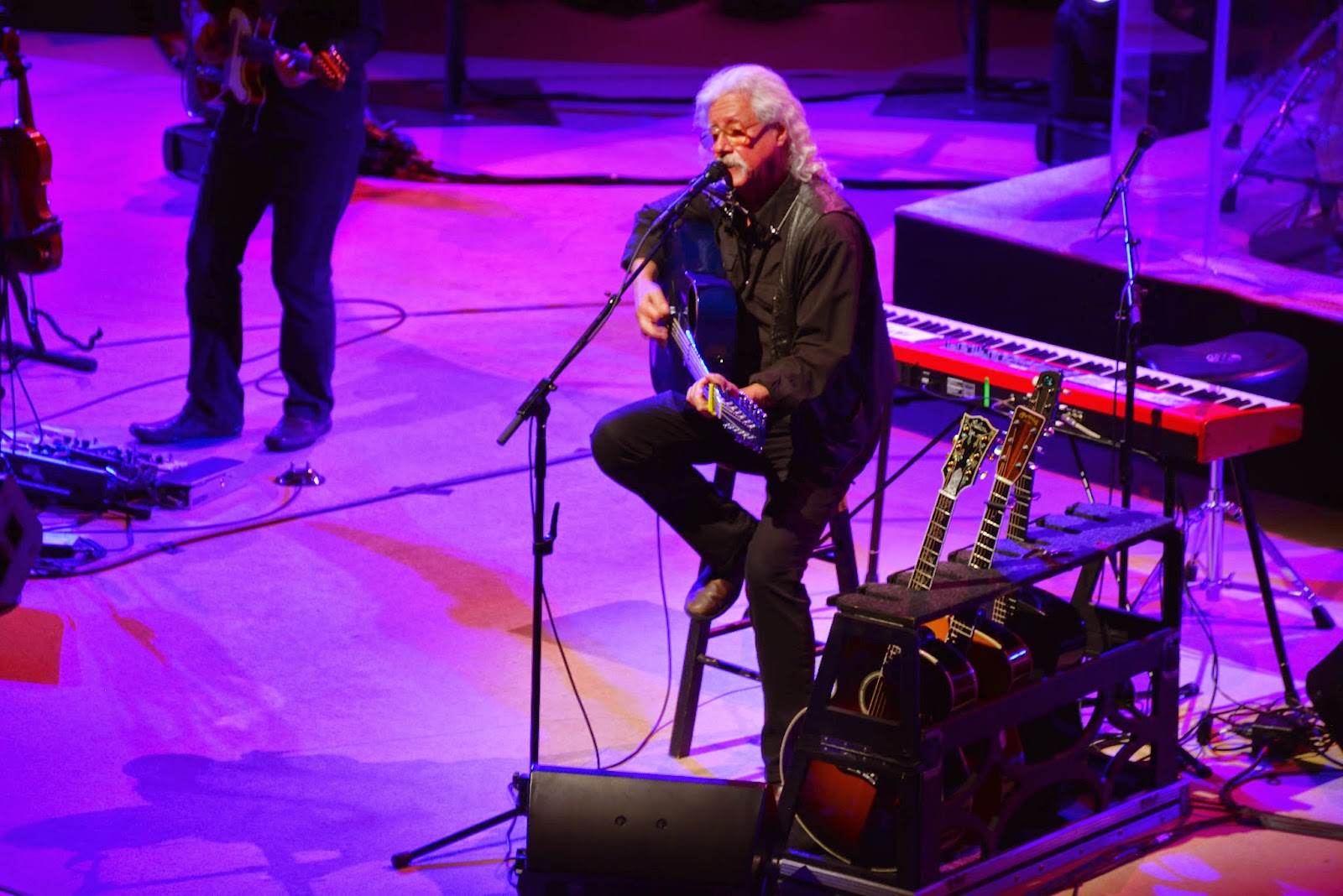 There was only one more song, however, and though it was, as Guthrie said, "A bit Kumbaya", we all did sing together once more, the lovely "My Peace." Guthrie said it was a fitting summary of his father's life, and what life could be better than one that goes ...

And that was that for the music, but not for Guthrie, as his fans stood and applauded until he was gone with a "God bless you and Good night!" 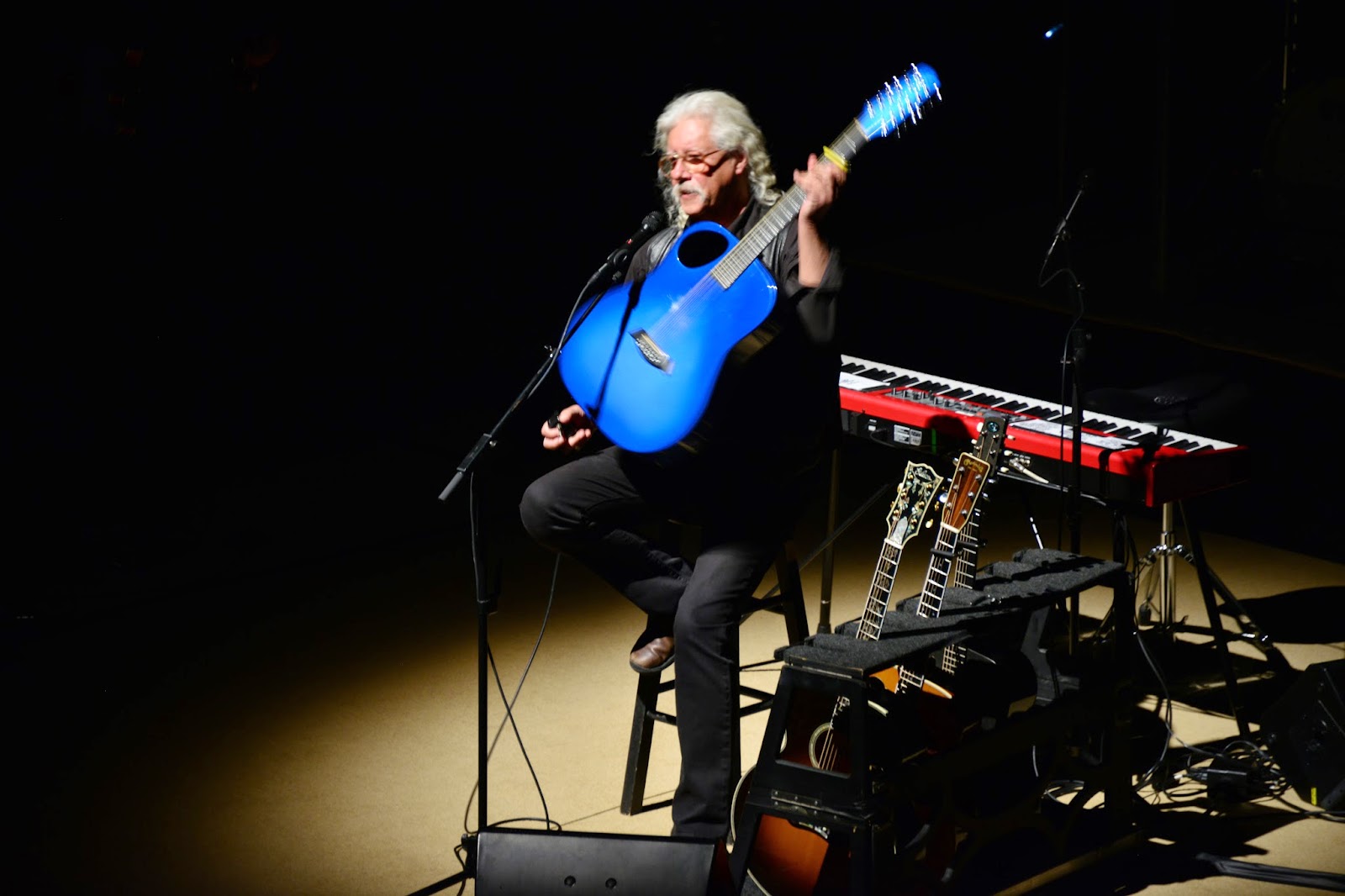 ... And we were blessed and the night was good, just for having been there.

The 50 Year Anniversary tour of Alice's Restaurant continues throughout 2015.