Keep It Clean - A Waterkeeper Comedy Benefit On Earth Day

Ok, bit of a conundrum. Some of my dearest friends on this planet invited me to a benefit for Waterkeeper Alliance, an organization near and dear to my heart - on Earth Day. The only thing was that it was a comedy show benefit, and I'm someone that doesn't really find comedy funny that often. Stand up comedy is usually too mean spirited and awkward for me to enjoy that much, if I'm honest. But then I'd probably even suck it up and go to a Bieber show or something if it was for Waterkeepers, so off I went to the Avalon in Hollywood.

There was mingling, and information, and lots of tequila courtesy of Patron, one of the evening's sponsors (the tequila would help with making the comedy more funny, I figured). There was a very cool car on display coming out soon from Toyota (another sponsor) called the Mirai, that's only emission is water. Host Kevin Nealon joked that if we all here in California bought one, it would solve the drought! Not a bad idea ... 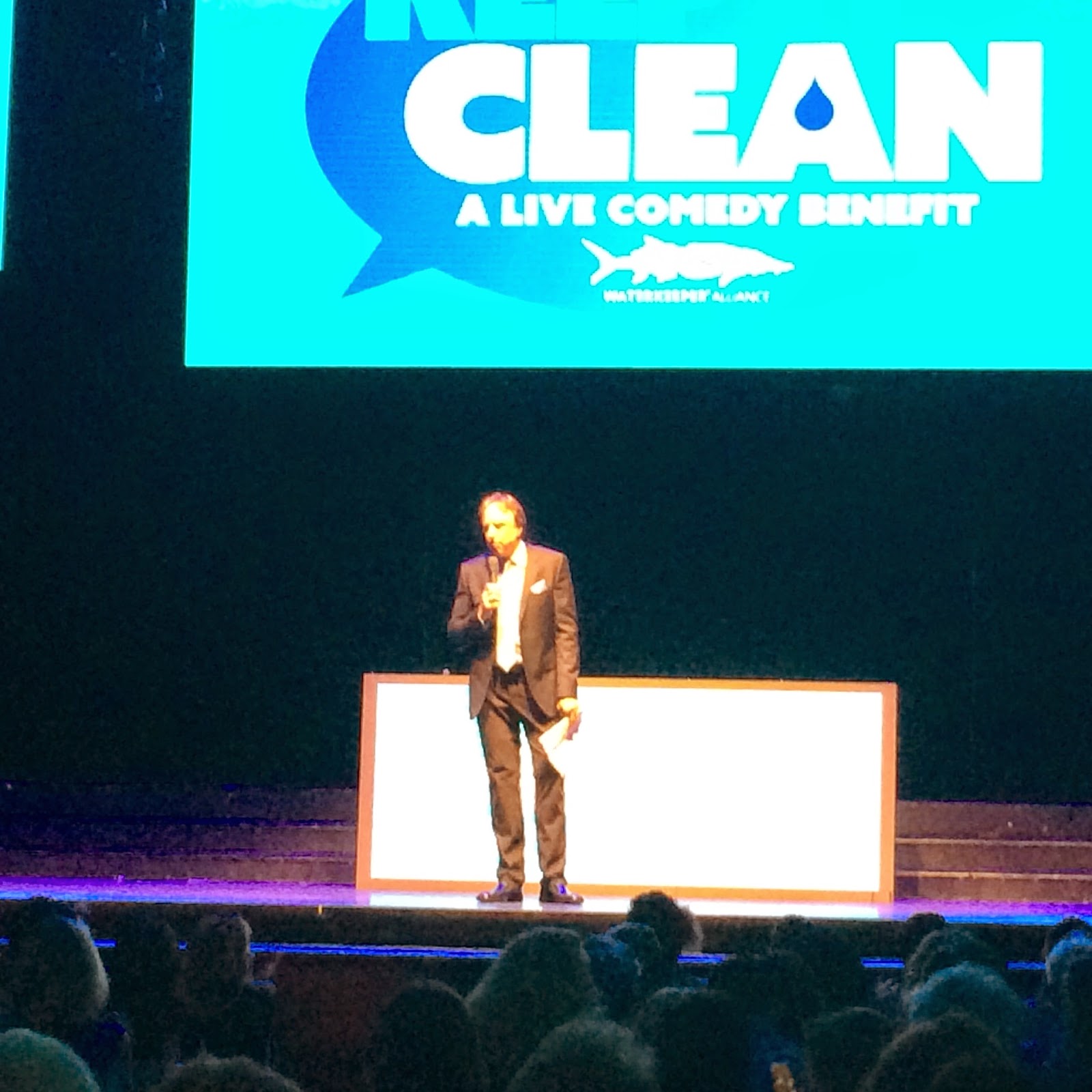 Nealon kicked off the show with, "I see you're all fans of water ..." and then went on to tell a story about his goldfish dying because of unclean water. "Goldfish are like foodies when it come to water, it has to be clean." He informed the crowd that Waterkeeper Alliance currently has 252 Waterkeeper organizations around the globe in 20 countries. So far. They focus on issues that affect our waterways, from pollution to climate change. They patrol and protect more than two million square miles of rivers, streams and coastlines - and I took all that right off their own materials. It's so important, and as we saw an absolutely sickening video of a river choked to death with a mass grave of fish, you understood how they came up with the idea for a comedy show - it would be way too depressing to even talk about it there wasn't also a little laughter.

There was actually just that, little laughter for Brad Garrett, who was there to introduce Ray Romano, and proceeded to rip on Ray Romano and Robert F. Kennedy, Jr. (President of Waterkeeper Alliance) in just that mean spirited and awkward manner that I was leery of. I settled in for a long night. 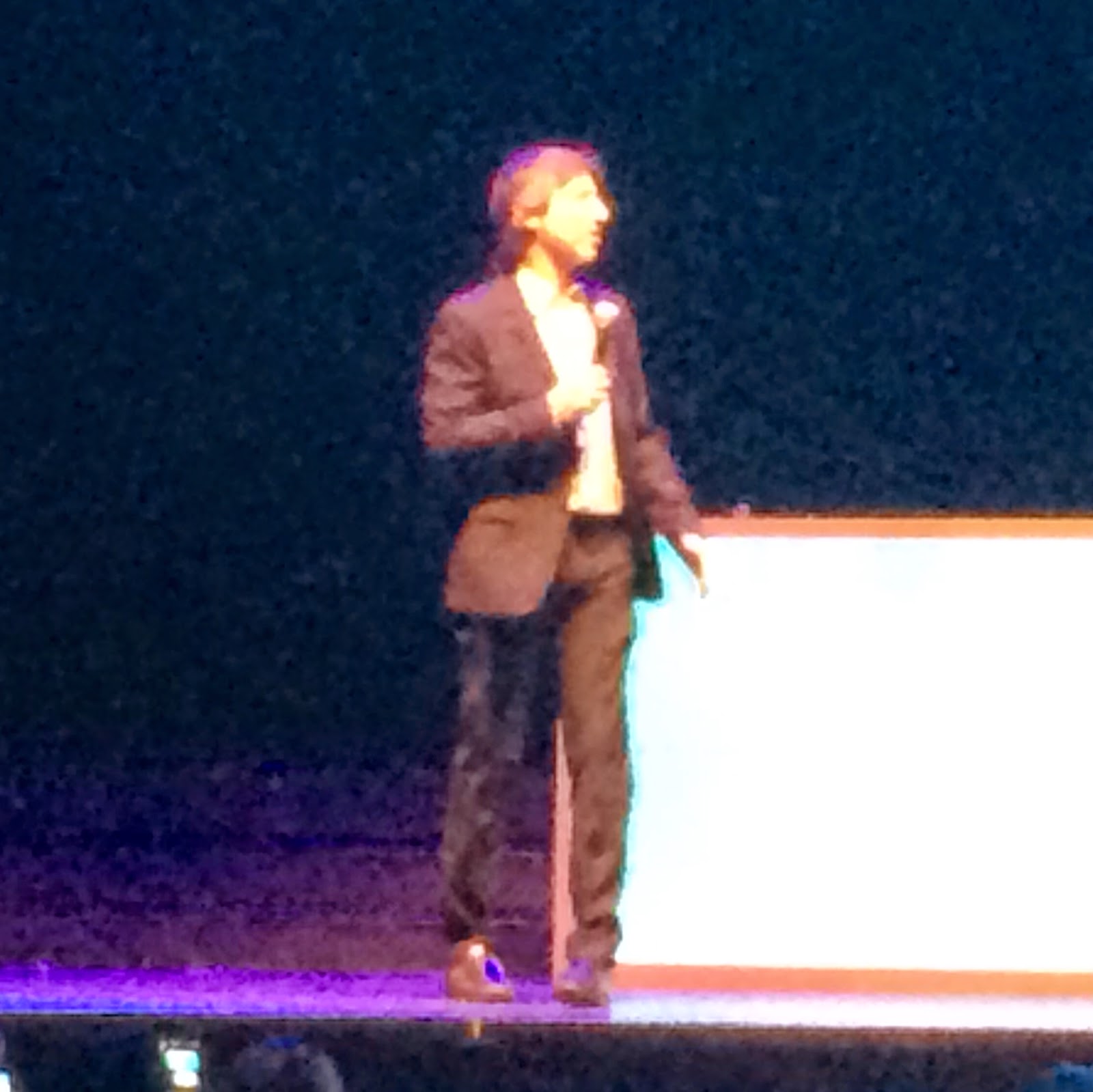 I was pleasantly surprised by Ray Romano, I have to say. I never watched his show, so wasn't familar with his schtick, really, and I was cracking up. He talked about the kind of friends you have as you age, and now he's in the stage where you want to be friends with as many doctors as possible. "I'm not gay, but if a gay doctor has an MRI machine, I'm sleeping over." He made some fun of his kid - "If my kid was on the space shuttle, he'd be watching his pee float." - and his wife - "Women want you to spend every waking moment paying attention to them, and then when they're sleeping, they want you to sketch them." HA! Yeah, so? 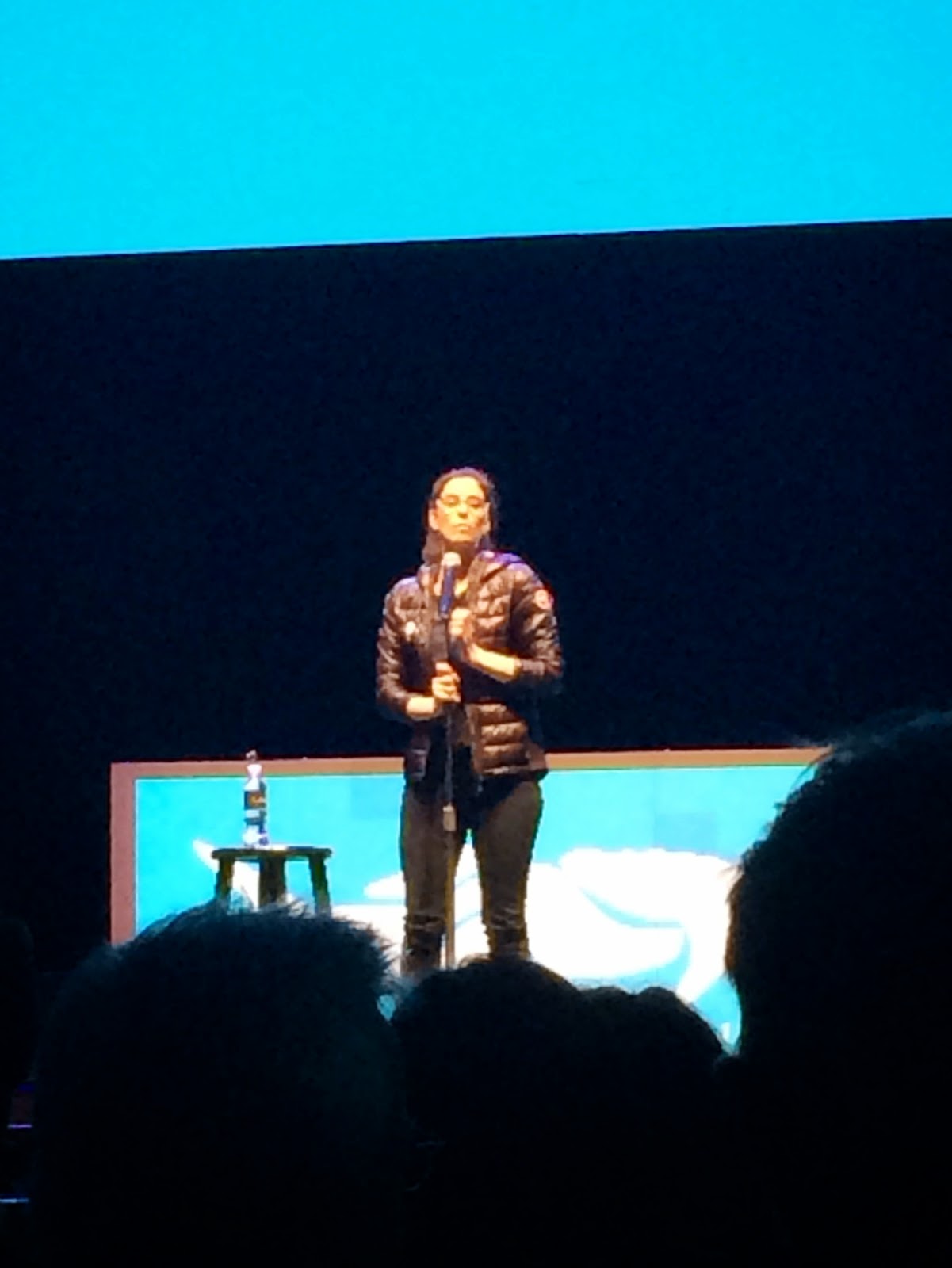 Sarah Silverman was up next, seeming unprepared (which I thought a little odd considering some in this crowd had paid thousands to be there. You might want to save the new, untried material for another time. I like her a lot, don't get me wrong, but I probably would have rehearsed for this event). Ignoring the "Keep It Clean" theme, about the only thing I can even repeat (barely) that she said was, "I have Angelina Jolie's lips - in my underwear." I'm not nearly a prude, but she made one guy in there real uncomfortable, and I can't tell you why because my Mom might read this, and we want her alive. But I admire not giving a rat's ass ... therefore, I admire Silverman.

JB Smoove bantered with Nealon, and Rachael Harris presented a great video of comedians talking about what water meant to them. It was funny, but also surprisingly touching, as these were funny people being funny, but also being nostalgic, and themselves moved by what's happening to these watering holes we grew up loving. 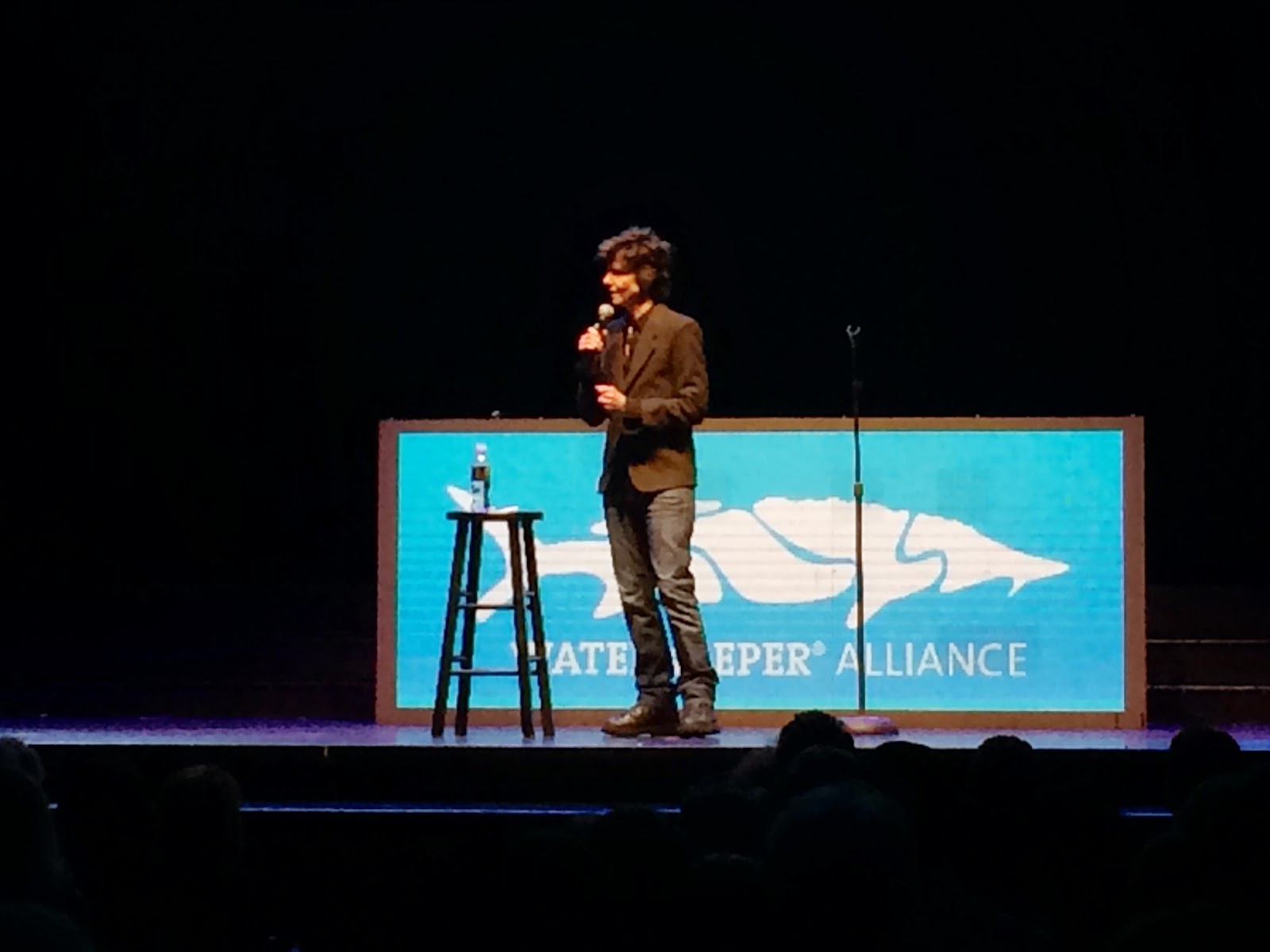 Cheryl Hines (Larry David's former t.v. wife, Bobby Kennedy's current wife) came on to thank everyone and introduce Tig Naturo, who I'd never heard of, but when I said I was going to see her, a friend told me she was like Mitch Hedberg - just about the only comedian I've ever found to be truly hilarious. Well, good job, friend, because she killed it. I had actual tears in my eyes from laughing. If she's on the bill, I could see myself going to more comedy shows. She did this bit about how people laugh that was hilarious. Like the sigh people do after a laugh, "like they're reminiscing about one second ago." Or the person that throws out a pig snort in their laugh, who she so badly wants to find out one day is an actual pig in the audience that comes up to her and says, "Pig fan!" (that one was funnier if you were there). The one that just killed people though was when she talked about seeing an actual sign at a public swimming pool that asked people to refrain from entering the pool if they had "Active diarrhea". As if this was so commonly an issue that there needs to be a metal sign made. People were crying ... and then a man in my row showed me a photo that he'd actually taken like two weeks before of just some sign in Santa Barbara. That's a real thing. Naturo ended by saying, "So I guess I did have water material." Hoo boy ... that was funny stuff. (Naturo is also a breast cancer survivor, and joked about even that in hilarious fashion - not easy). 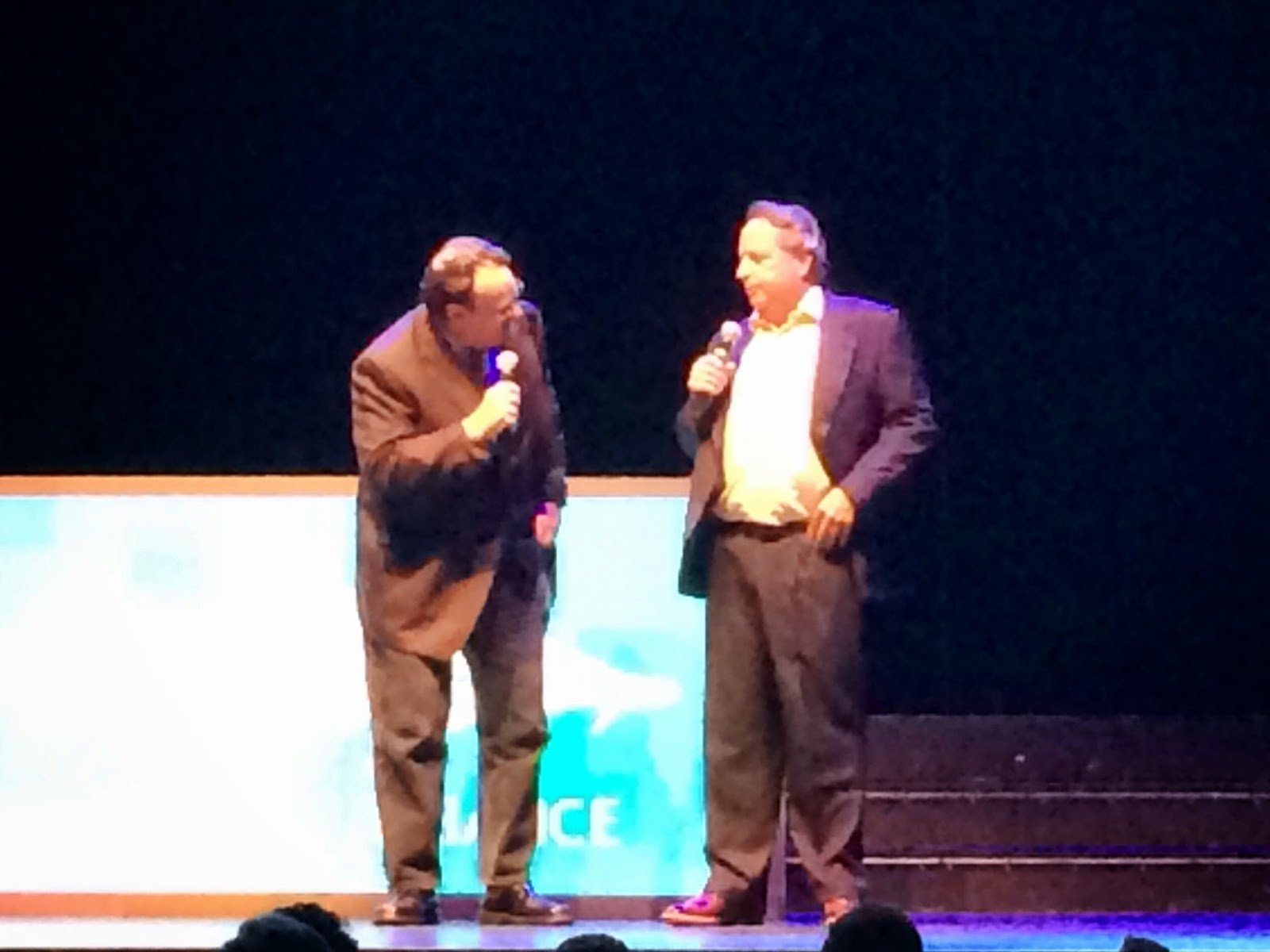 Dan Aykroyd and Jon Lovitz came on briefly and charmingly to introduce Martin Short. They are so clearly great friends, and that was touching too. Akyroyd said he'd want Lovitz as his friend on a desert island, "because we'd laugh until we starved to death." We all could have had more of them and less of Short, I think, as his set was basically just talking about how great he was. I think facetiously, but still. He made it into kind of a roast of Bobby Kennedy, which I'm not down with because I think the man is simply great. About the funniest thing Short said was that Kennedy looks so good these days he gets mistaken for Rachel Maddow. Courtesy laughs, but nice of him also to be there to support his friend and Waterkeeper Alliance. 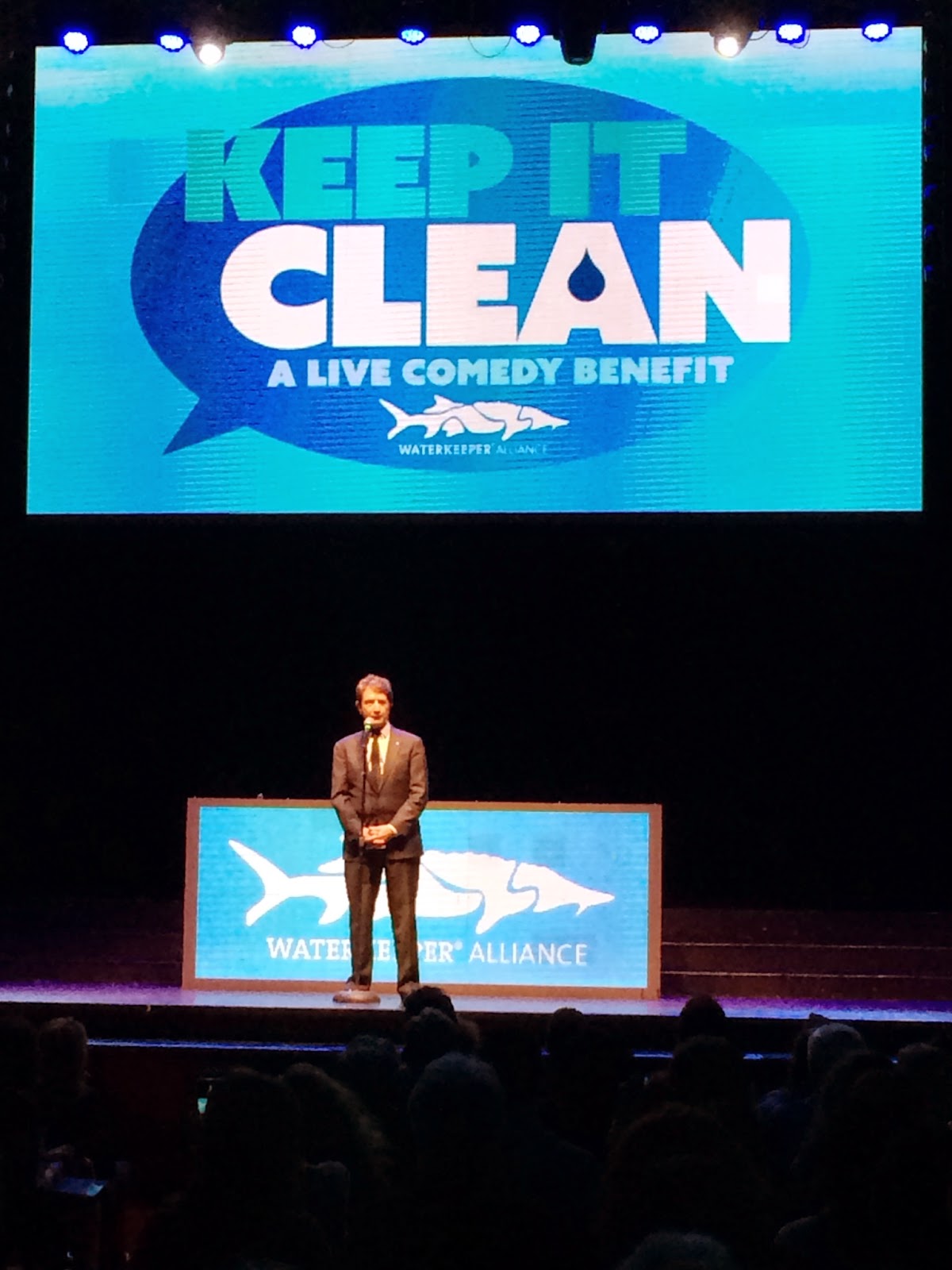 But seriously, folks ... the best part of the show (after Naturo) was Kennedy's speech. It was so inspiring, and so vital for really everyone to hear. He told about how he moved to California and has loved living at Point Dume and having a swim every morning to start his day. How it calmed and healed him, and when it recently rained (not nearly enough), how he and his son couldn't go in the water for three days, and that felt like a theft to him. And it IS a theft. Corporations polluting our water to the extent that you can't go into our publicly owned waterways or eat the fish within them without fear of getting sick or dying, and that is a robbery of our right to clean water, and should be punished accordingly. How his memories of the sea air, the feel of the clean water, the fish he'd caught as a boy, how much more special those thoughts and feelings are to him than any electronic device spent childhood could ever hope to be, and how important it is to not only share water and nature with the kids of today and the future, but to preserve it for them. "We will keep these waterways clean and protected for the kids," Kennedy said in closing, to a thunderous - and well-deserved - standing ovation. 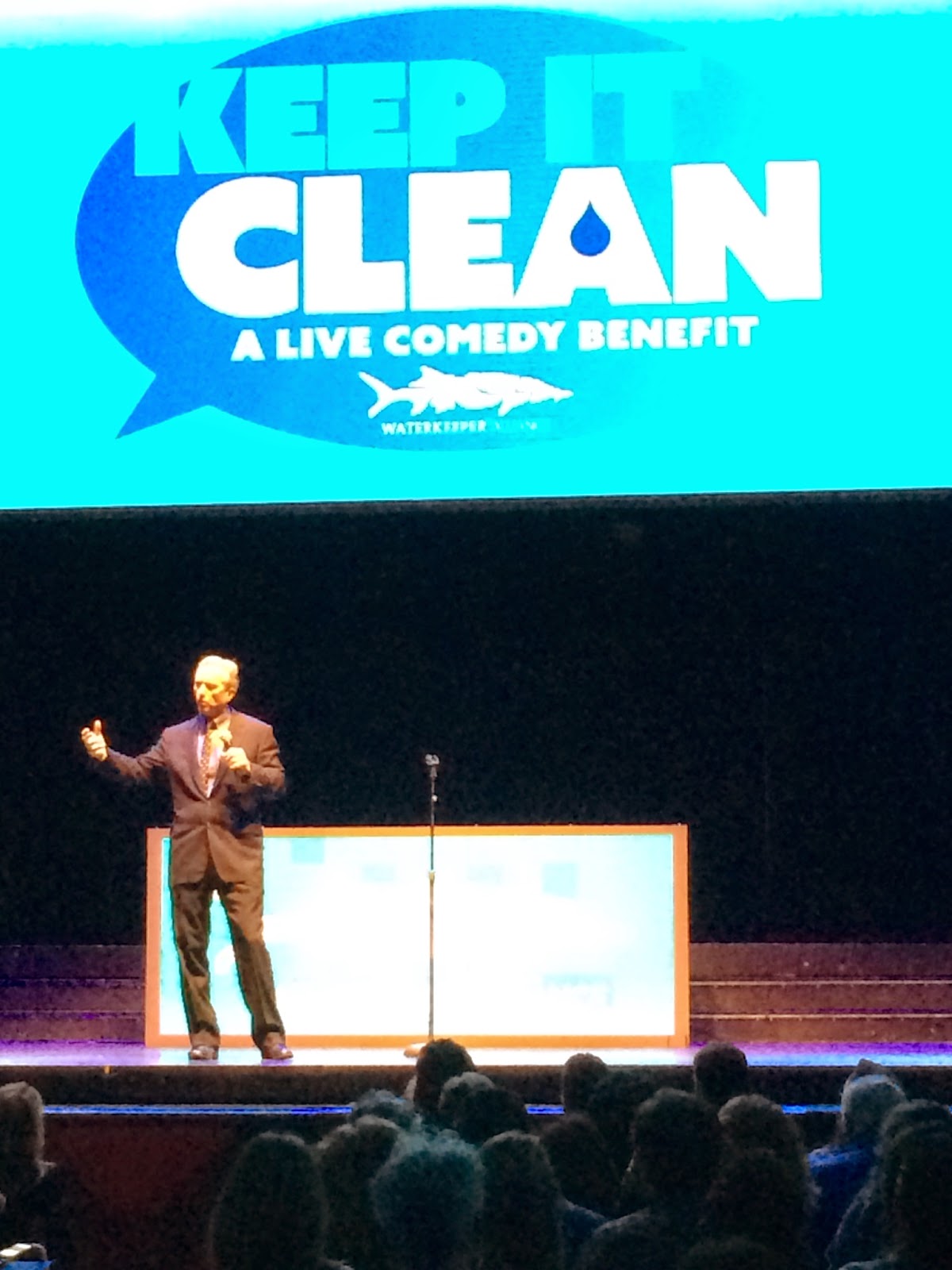 We all carried on to the (fun and funny) after party, truly feeling not only greatly entertained, but deeply inspired to play any part in helping the superheroes of Waterkeeper Alliance in anything they need help with. And you all should too. It's a really big deal, and everyone has to treat it as such now. Donate, because legal battles against big, sinister, polluting companies takes a lot of dough. Pressure those companies to change their filthy habits by not supporting them in any way with your dollars. I think, most importantly, love and respect your waterways, and hold them dear. When they're destroyed, so are we.