The Fine And Fanciful Art Of Alexis Murray

5/9/18: Lexi passed away this past Sunday. There are really no words that can express how sad that is, so I will let her story speak for itself. She was Awesome.

Alexis Murray is a fine artist living and working in Venice, California. She's also my friend, and real cool. We had a chance to sit down recently and dig more into her art and the path that got her here. 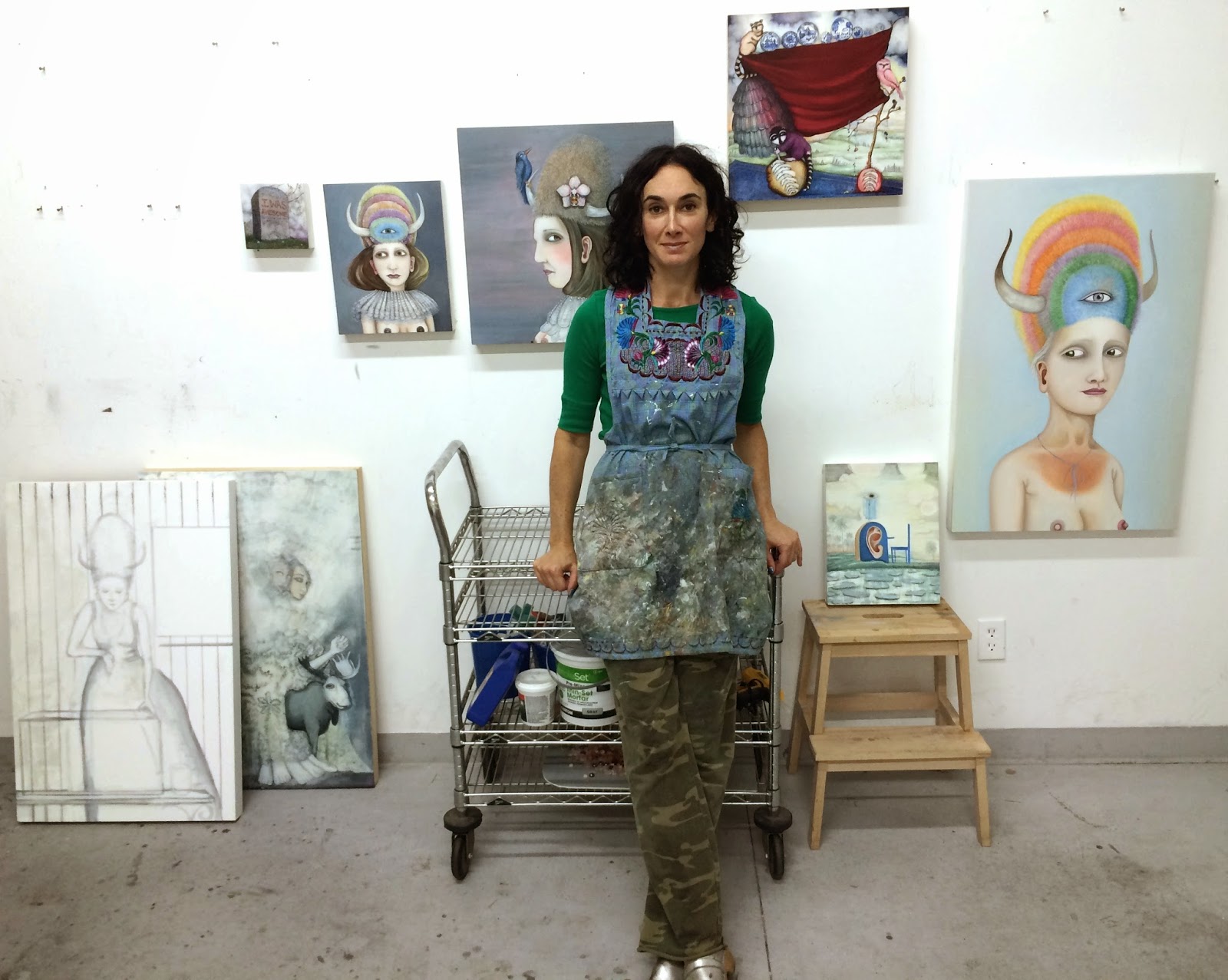 That path began in Philadelphia, where Murray was born and raised in household where "Artists were like heroes in our house." Her family's appreciation for art was further encouraged in high school, where Murray had the first teacher that really celebrated her work in a Mrs. Alice Cook. That led to attending Cooper Union Art School in New York and then transferred to Rhode Island School Of Design to pursue her higher education in painting and photography.

After working gigs in graphic design and as a photography assistant, and working on the Duke and Duchess of Windsor auction at Sotheby's in New York, Murray was happy to be working in her field ... but really missed painting. She created her first studio in her friend's extra bedroom and got into grad school at the School Of Visual Arts in NYC. She also got into illustration while there, which I totally see in her work ... you really want her to illustrate some very cool book out there. She had to choose a mentor for her thesis, and renowned photographer Duane Michals filled that role. His sense of humor and surrealism impacted her work, and grad school set her off in the direction of her current work. 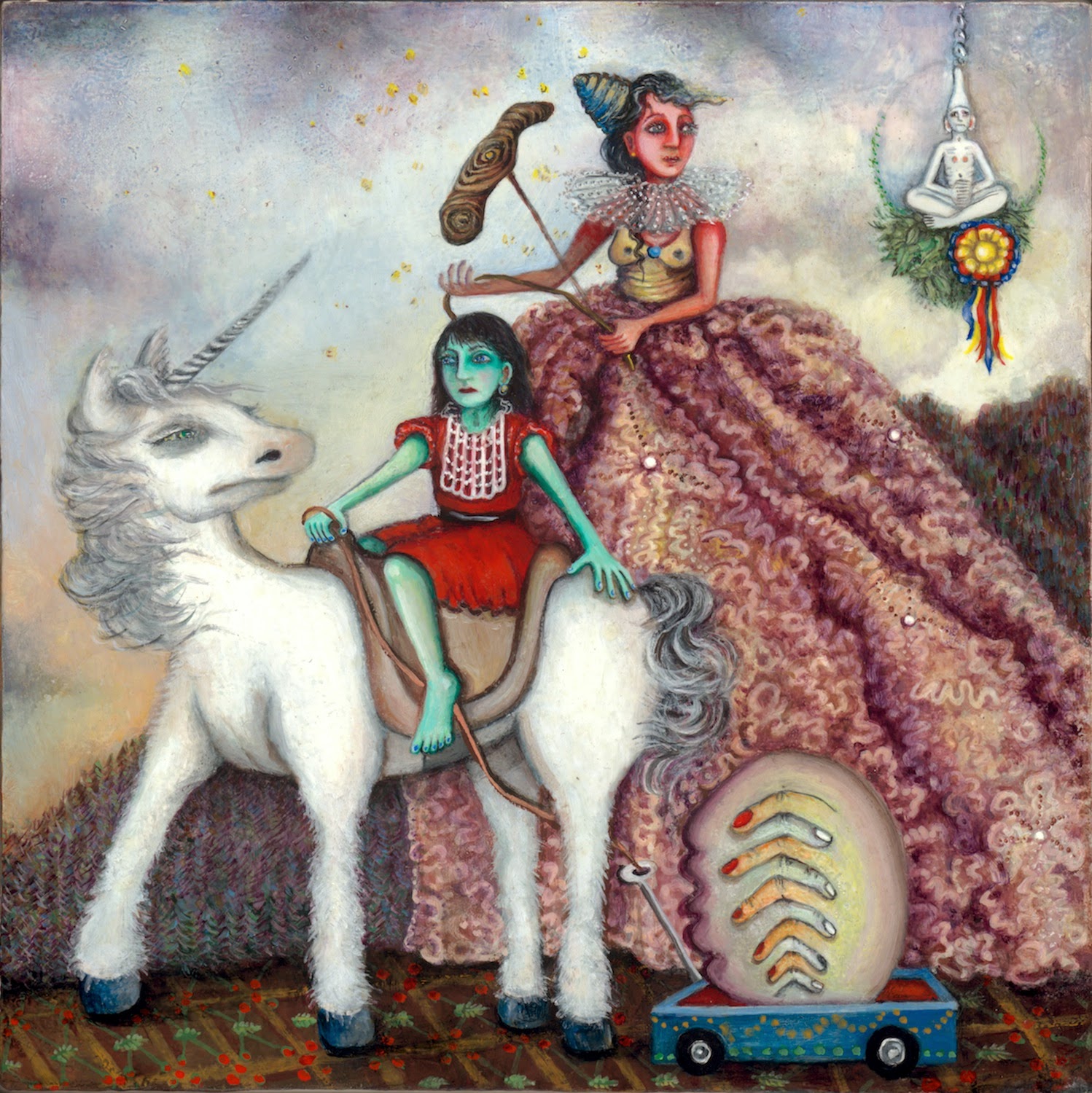 Murray wound up falling in love with her childhood crush, Austin, and he lived in Los Angeles, so that meant a move across the country. Together they embarked on a worldwide trip, which so influenced Murray that she set up her art studio right when they got back, all inspired. Two (darling) little girls (Luna and Larkin) soon followed, and that meant the studio space got sub-letted, while Murray spent more time at home. Home also affected the work, as painting at home with babies necessitated smaller scaled pieces, both for space and time.

Being home with two little girls also meant lots of time spent with imagination, dress-up, role playing ... "All the things that inform who you'll become." As Murray explained, "I want my art to have that sense of magic that you have in life as kids." As you can tell by looking at any given piece of her work, it certainly does. 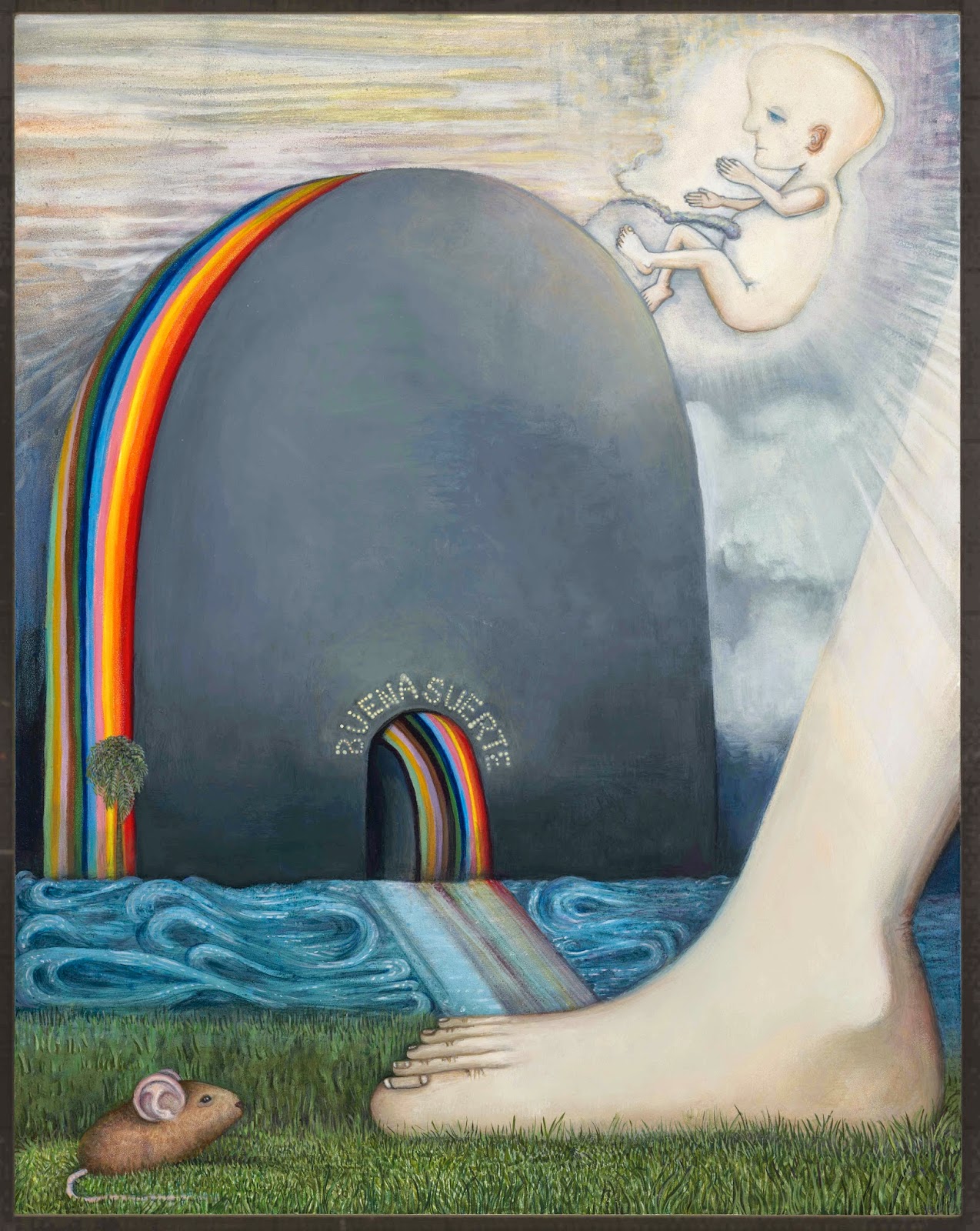 Her work also always has that sense of humor within it ... "Everything I do is fun for me ... I find myself laughing while I work all the time." That comes through in her paintings for sure, but perhaps most amusing are her gravestones. The above painting, Buena Suerte 2 is like a sketch for her real, fabricated, sculpted headstones that say things like, I Was Awesome or For You (for the heirs). One upping that is her plan for an inflatable Afterlife Machine, a large scale public installation, where the viewer would walk through and see what their next reincarnated life would be projected on the wall. Fun AND funny! 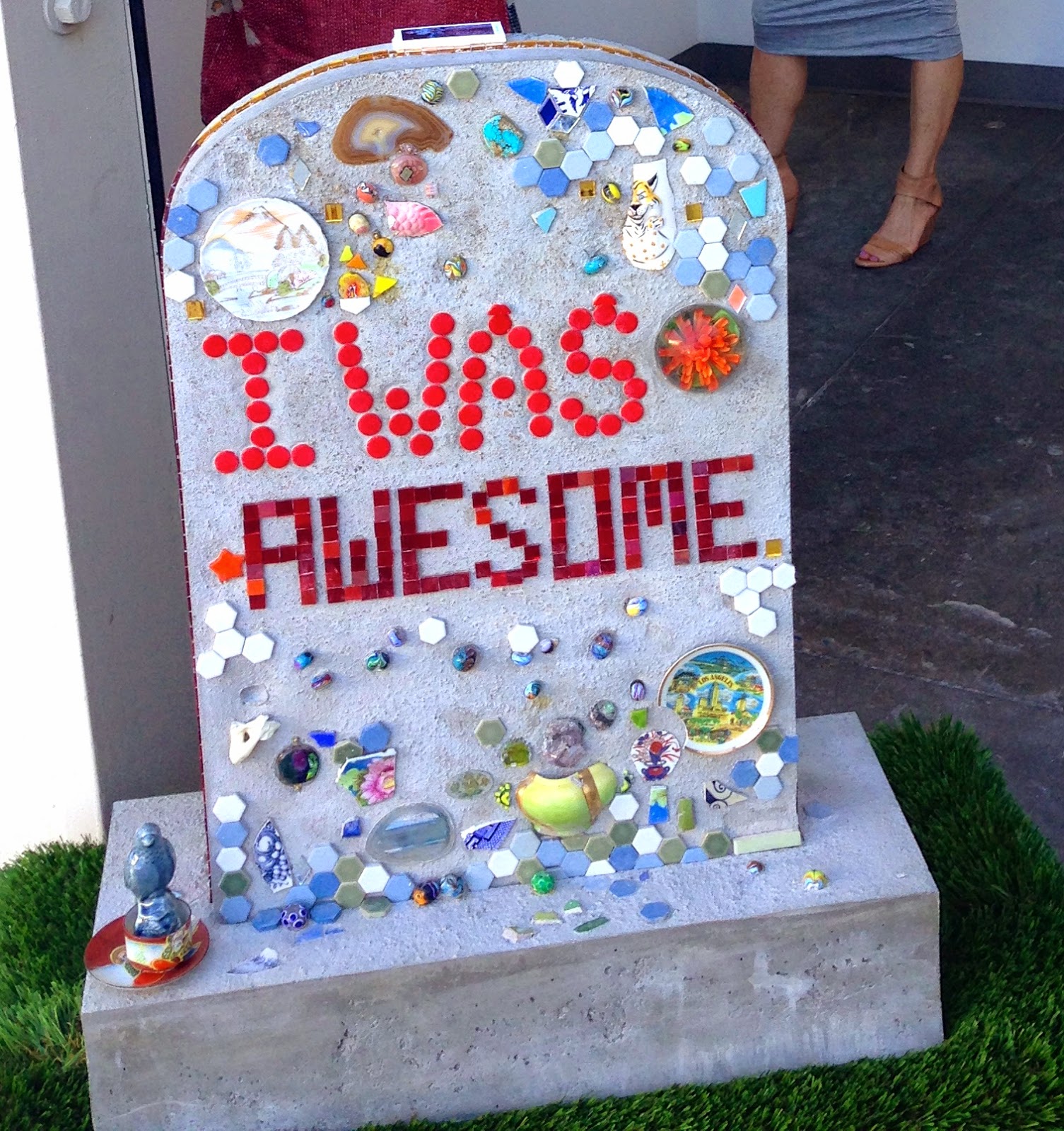 Now that the girls are in school and busy as kids are these days, Murray has a new studio in the Beacon Arts Building in Inglewood. Once each year, the building hosts Open Studios and this year's event is November 8th and 9th, from 12-5 pm. "Inglewood is super supportive of the Arts Community," says Murray (and now has far cheaper studio space than Venice - something we need to get a handle on if we still want to be a haven for artists. For real.) The November event is sure to be feast of fantastic art to behold. 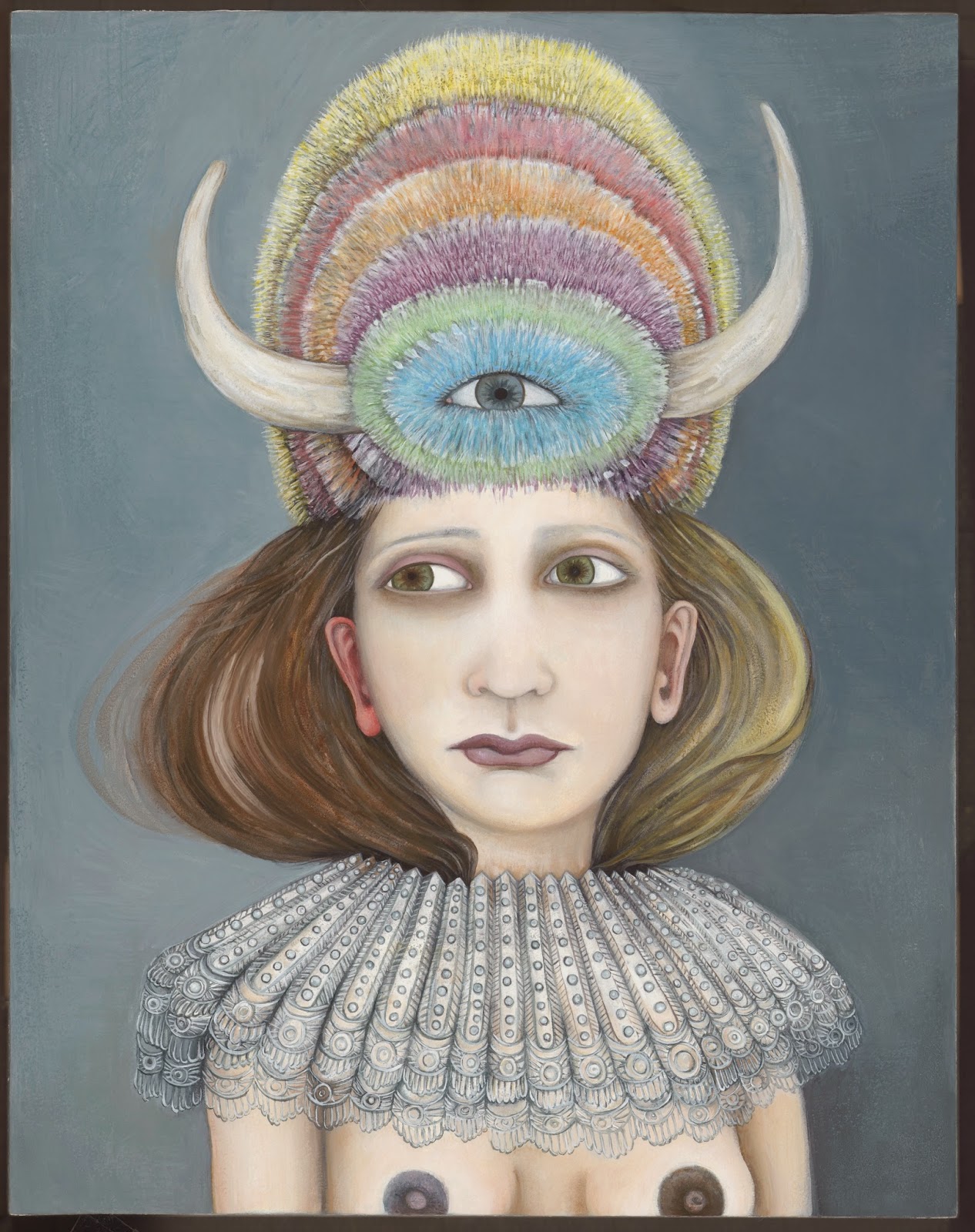 Murray's own work has grown once again, both in scale and meaning. As she explains, "I'm extremely interested in dualities. Almost all the paintings I make depict things trying to live in many worlds at the same time, and the struggle that inevitably presents." As in her Keeping An Eye ... "Here you see identity, sexuality, authority, femininity, aging, beauty, wisdom, bundled with severity, humor and melancholy." As you stand before it, you see for yourself - it's all there. 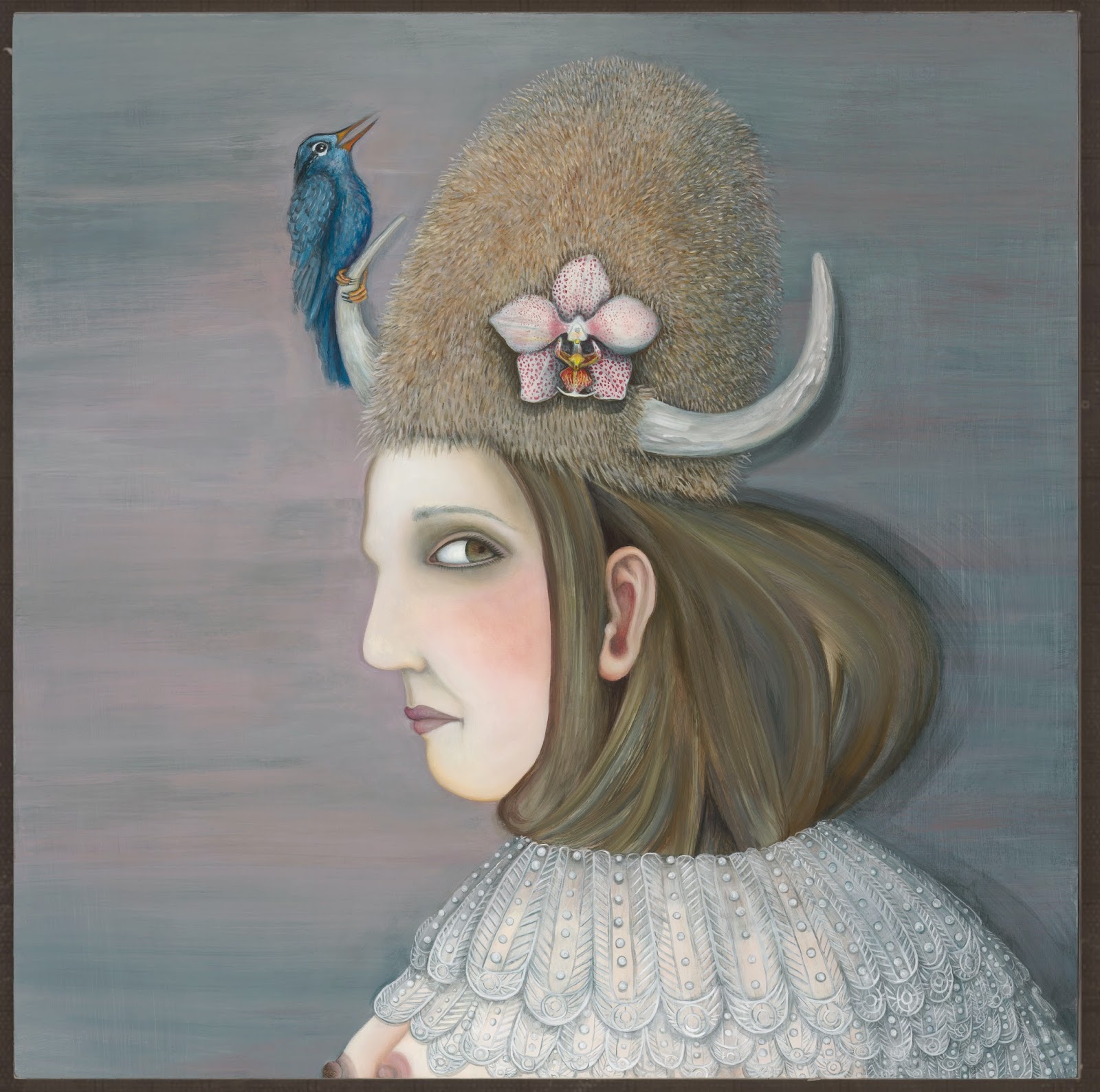 Showfolk is about family life. "It's about how we all change roles and shift in dynamics within any given scenario and continually challenge one another." Murray went on to say, "I also love kitsch. This informs a lot of my colors and the overall look of the painting, and adds an element of modernity to the very traditional style of painting I have studied and worked so hard to learn." So great. 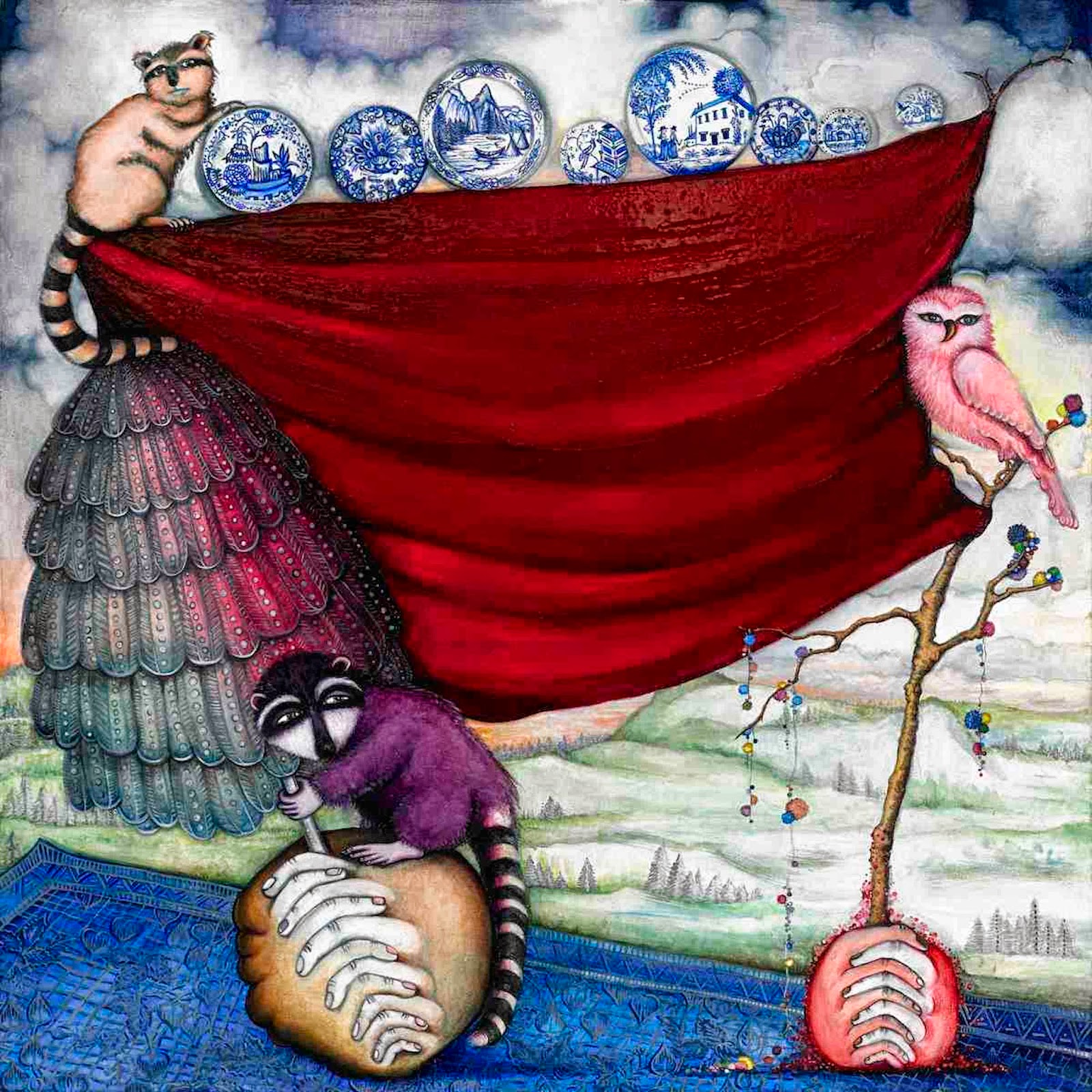 You notice in Murray's work that she tends to also have fun with composition and traditional teaching about where things should go, tweaking the work with things you're taught not to do, and making those choices work. 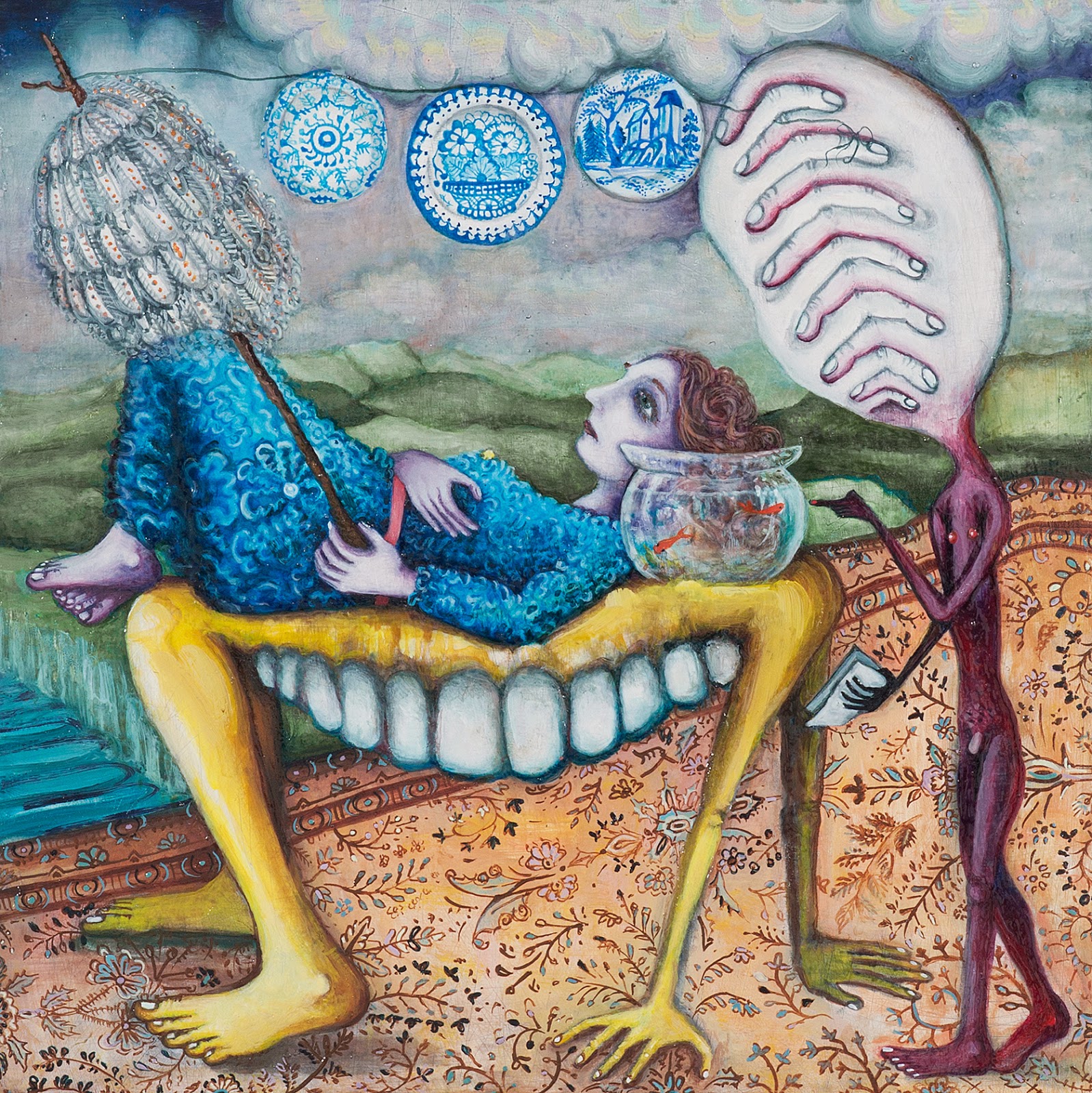 Among her body of work are the miniatures, work directly inspired by her time spent in India. Six inch squares that "demand intimacy from the viewer even in the way the need to be physically approached ... they should almost seem impossible to make and are the result of obsession." And because they're so little, you can both afford them and have the space for them! Win win. Another cool thing for Murray was that she was also recently chosen to design a commemorative coin for the state of Wyoming. How cool is that?

We also spoke about the Venice we love, and Murray told me, "I've only ever lived in Venice in L.A. - and I have every intention of dying in Venice." (Her headstones would certainly fit in here!) She felt similar to how I did when I first came here, that "Venice is the essence of being free to be who you are." Arriving from New York, Venice fit Murray to a T. "People are so open-minded and so cool ... it's bohemian, but upscale if you want that ... the climate ... the creative vibe ... you just meet the best people here." Fact. 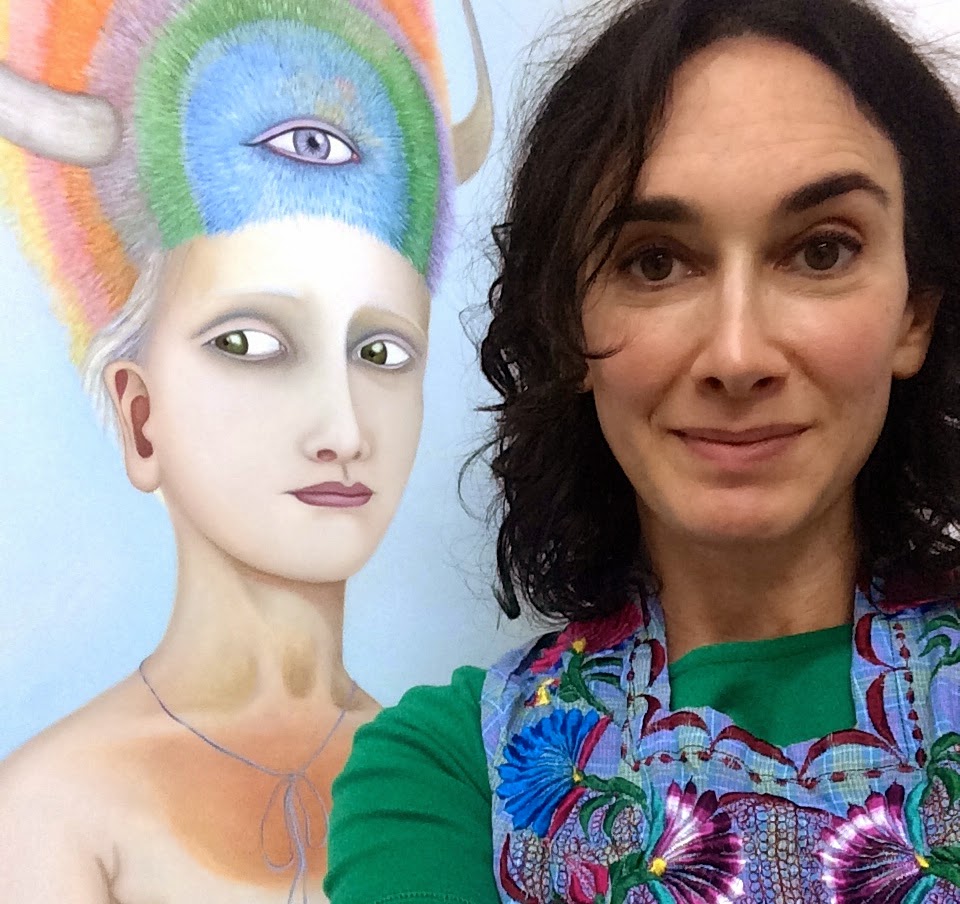 Murray loves raising her kids here (you should see their house for Halloween - wow!), loves their neighbors, loves the Saints and Sinners bakery on Lincoln ("the epitome of Venice funk"), and loves that she gets to live and work in a place that so lends itself to exactly what she's doing. Living her art. 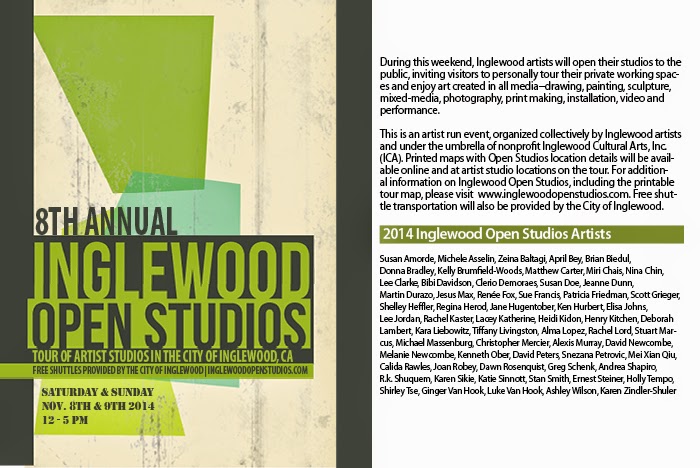 Visit Alexismurray.com to see more, or visit her at the Beacon Arts Building for Open Studios, November 8th and 9th, 12-5 pm. Murray is located in Studio 4D.