I finally got to go to one of the greatest, coolest traditions around Venice last weekend when I finally remembered that it was the annual reading of Moby Dick put on by the Venice Oceanarium. 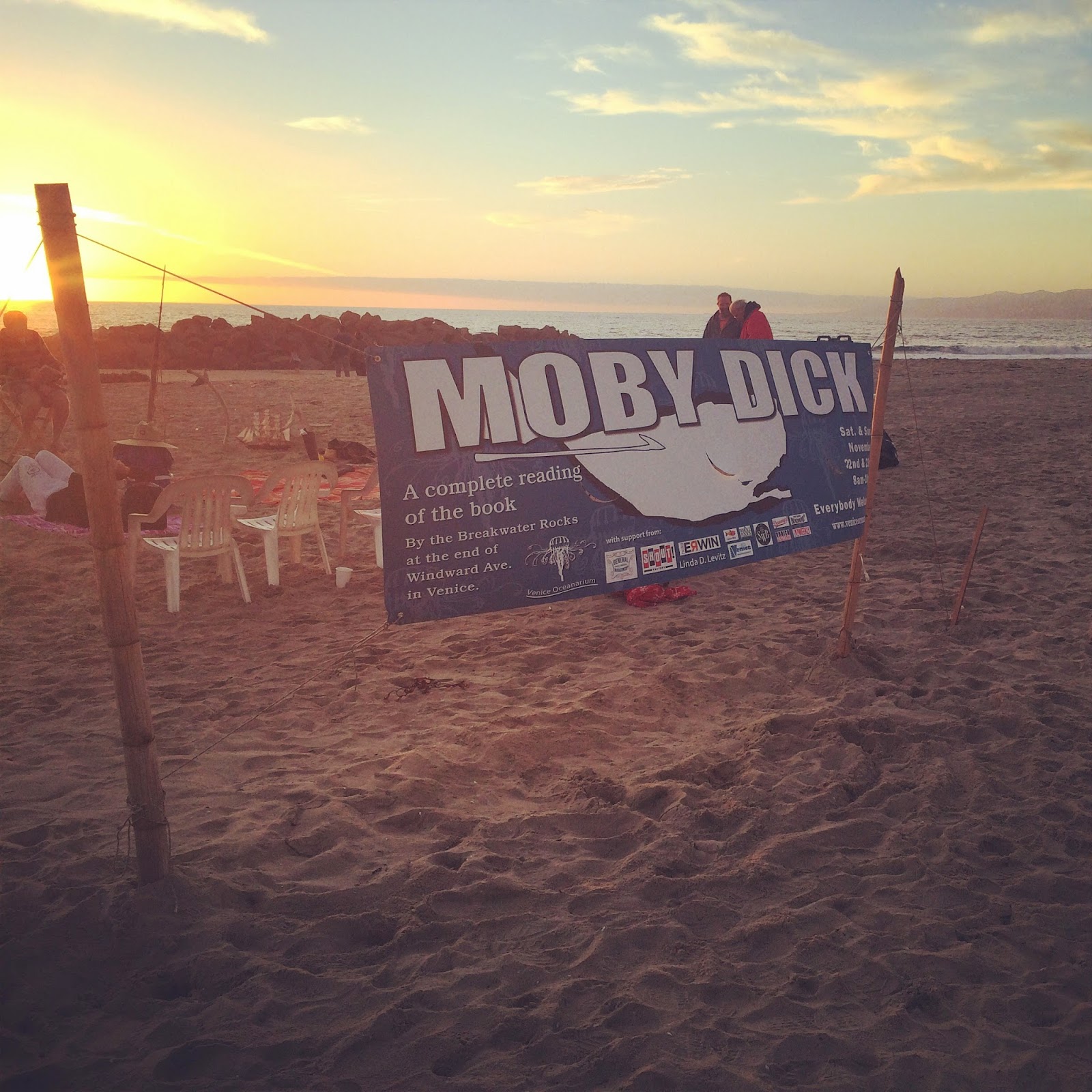 I went down for the sunset segment on Saturday, and a good portion had already been read (It goes from 8 am to 10 pm, both Saturday and Sunday!). All sorts of different people were sitting around in the sand near the Breakwater, where a microphone had been set up with a p.a. and nautical props like whale bones, a spear, and a little model ship set the stage for the salty tale. 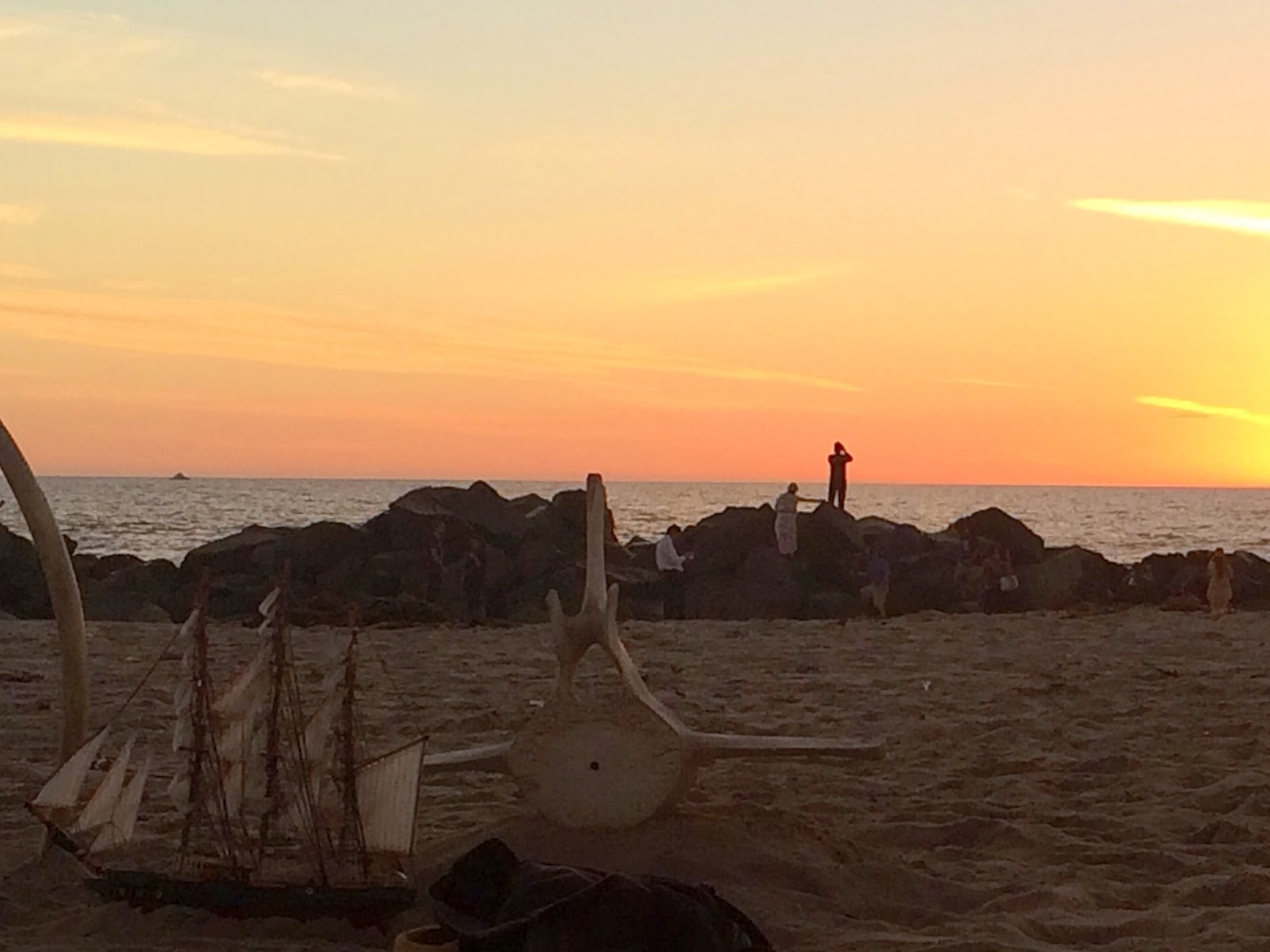 It was so picturesque, with the sun setting, the clouds dancing and the waves crashing against the rocks behind ... you can imagine how very pleased Mr. Melville would be to see his great work honored in such a way in these modern times. 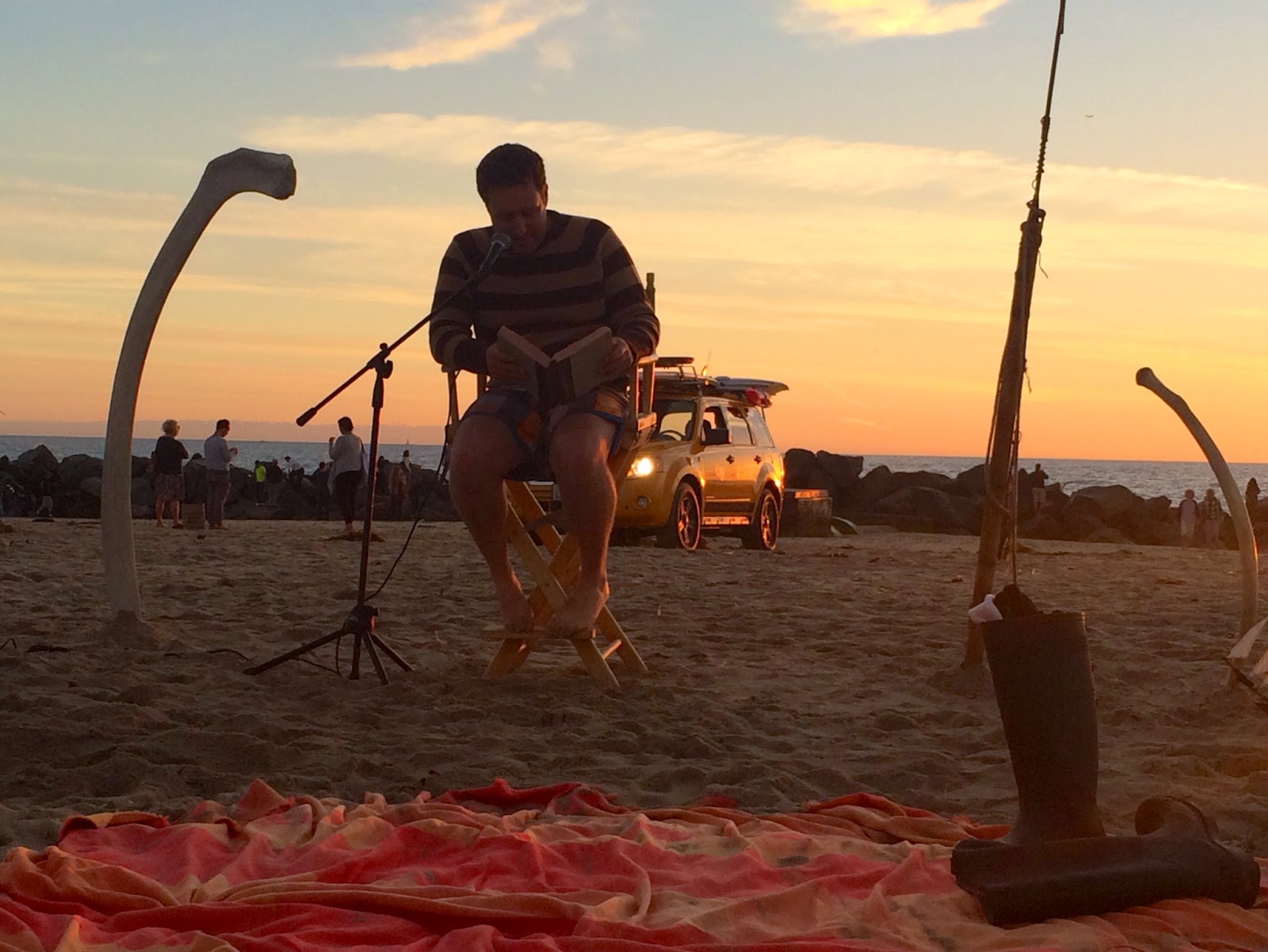 There's something very nice about being read to ... it frees up your mind to really imagine as you listen, rather than focusing on the words yourself. I thought of my little story hour reader at our library back home (RIP, Mrs Swanson!) and how she had set me on the path to love reading and writing. There were several obvious students there, taking notes and following along in their own copies ... but that's a pretty cool way to get extra credit.


I didn't take a turn reading as I somehow got a gnarly cold and would not have made it through many sentences without hacking, but I certainly appreciated the readers who got up there and brought the quest for Moby Dick to life. Some got into character, some offered their own digressions (like David Bush who didn't want to read next to the spear, as he's a pacifist. I love Venice), and though one clearly couldn't stay for the whole thing, I'm quite sure that they all greatly enjoyed it.

Just as I was starting to freeze and sniffle more, hot clam chowder arrived on the sand, donated by Enterprise Fish Company. So now we're listening to Moby Dick as the very last streaks of sun etched the sky, eating clam chowder and taking snaps off a thoughtful friend's flask. What a perfectly gorgeous Venice evening, truly. 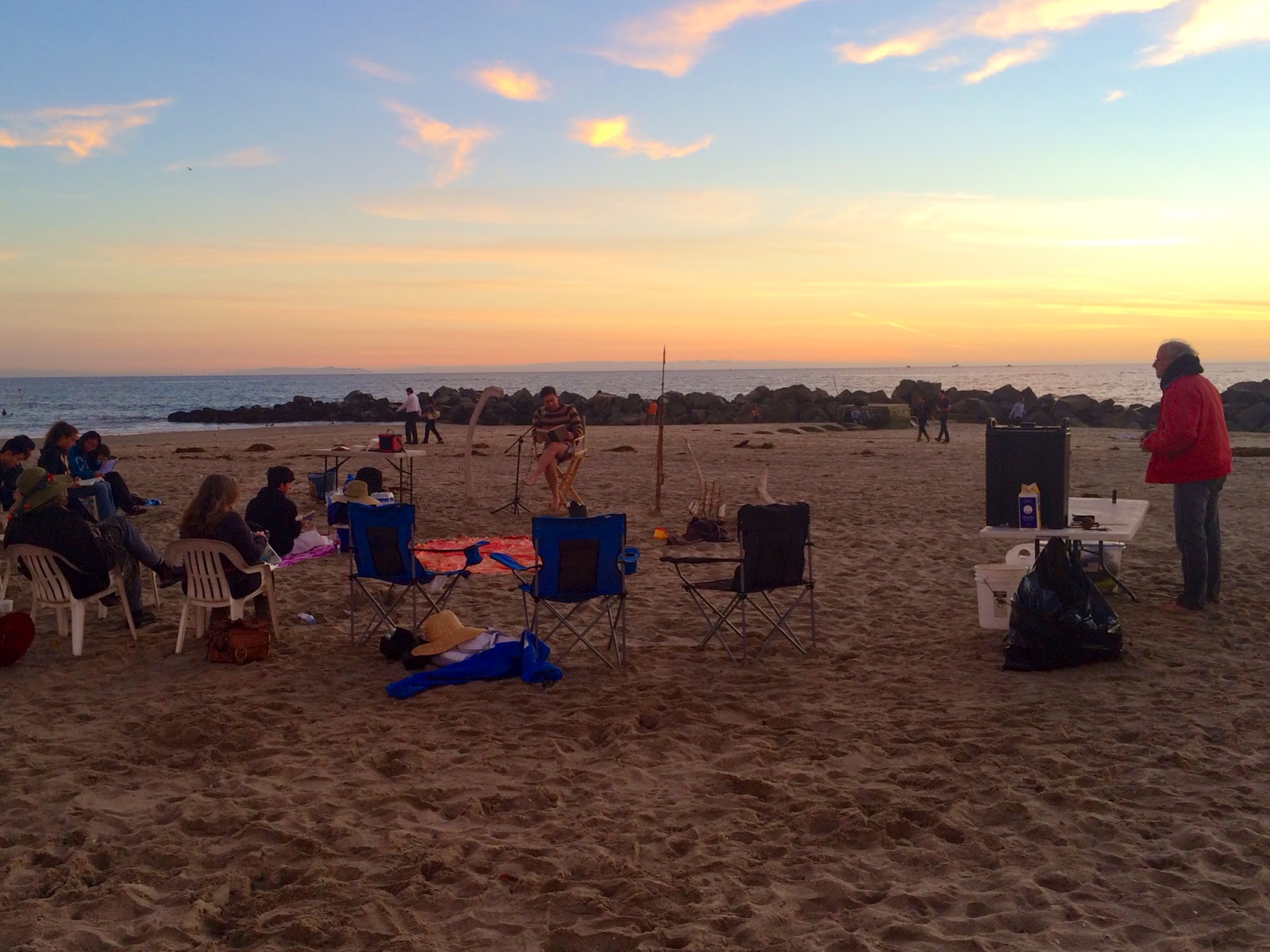 There are wonderful, unique, supercool things like this going on all the time around town, and once you take part in them, you don't want to miss them again. 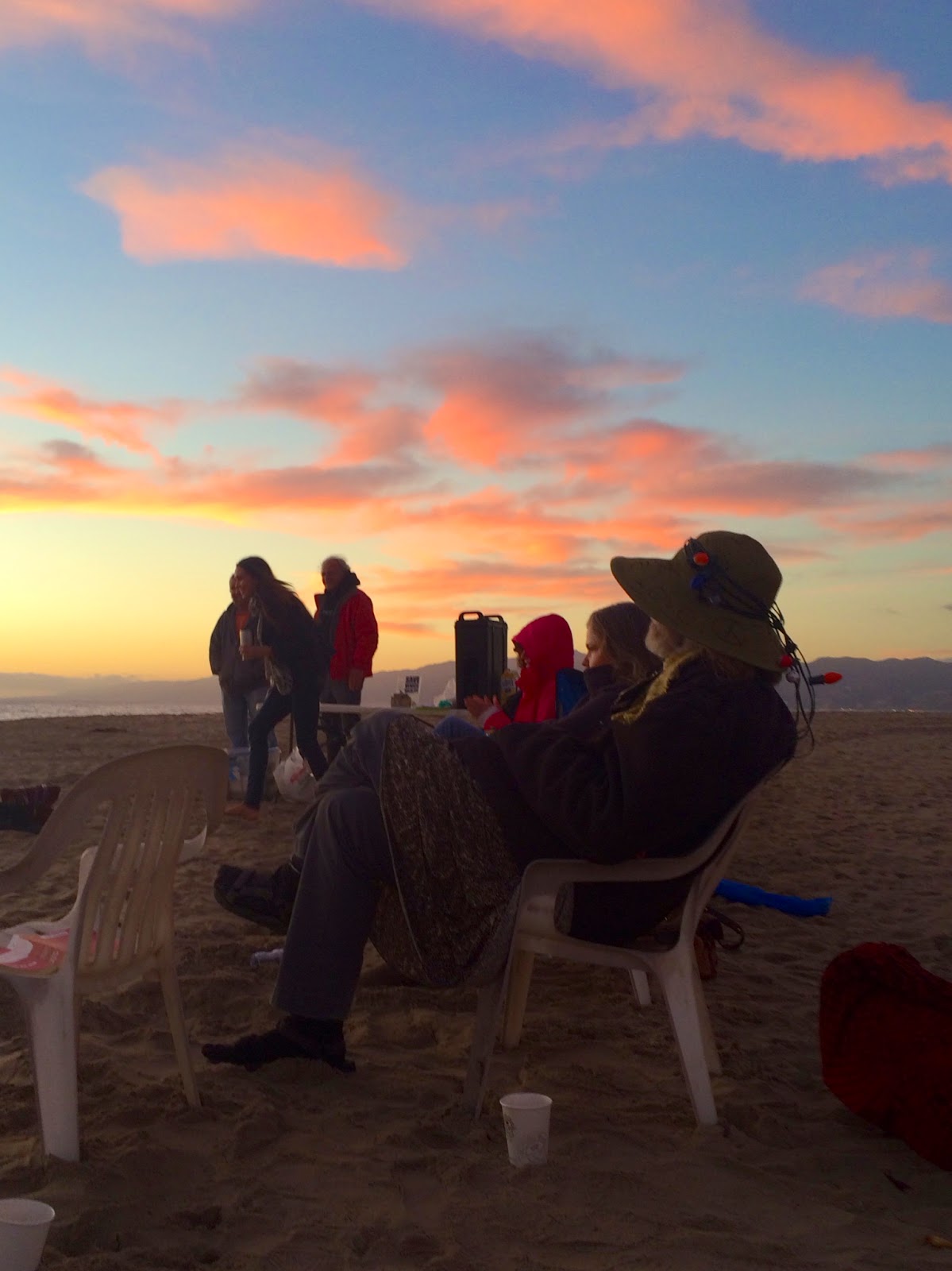 Thank you to all involved in this magical event ... I'm going to come on Day Two next year to find out what happened! (Ha).