Mason Jennings - In A K-Town Church

I got to see Mason Jennings again on Friday night in a church in Koreatown. I've seen him play many times, both out here and in Minnesota, but it had been a while, so was extra great to hear songs I've loved for a long time, played by just Jennings and his guitar.

A Friday night show in Koreatown that starts at 7 pm is nearly impossible to get to on time when you live in Venice, because traffic simply sucks. The Unitarian Church listed that as the show's start time, and said it again when I called. We raced there straight from work, but still didn't arrive until 7:45. A frantic search for nearly impossible parking revealed others rushing down the sidewalk, looking equally frantic and bummed. When we arrived at the church, everyone was all casual and said the opener didn't go on until 8:30. They were not very well organized. So now we had time to kill, which led to a tour of Koreatown that felt like a free vacation, so foreign did it seem as we traversed 8th Street past blocks and blocks of sidewalk food vendors that all smelled great. We wound up at the R Bar (after obtaining the password - IT'S ALIVE! - from the internet). Cool spot, cheap drinks, good food. We had some laughs and then hot-footed it back to the church to have entirely missed the opener, Lucette. They were selling drinks in the lobby, that we said we didn't have to slam, you could bring them with you into the sanctuary. What?! This felt somehow wrong, especially when folks were acting like it was a club, spilling drinks and leaving their glasses on the floor when they went to get new ones. Not very respectful of the venue. At all. 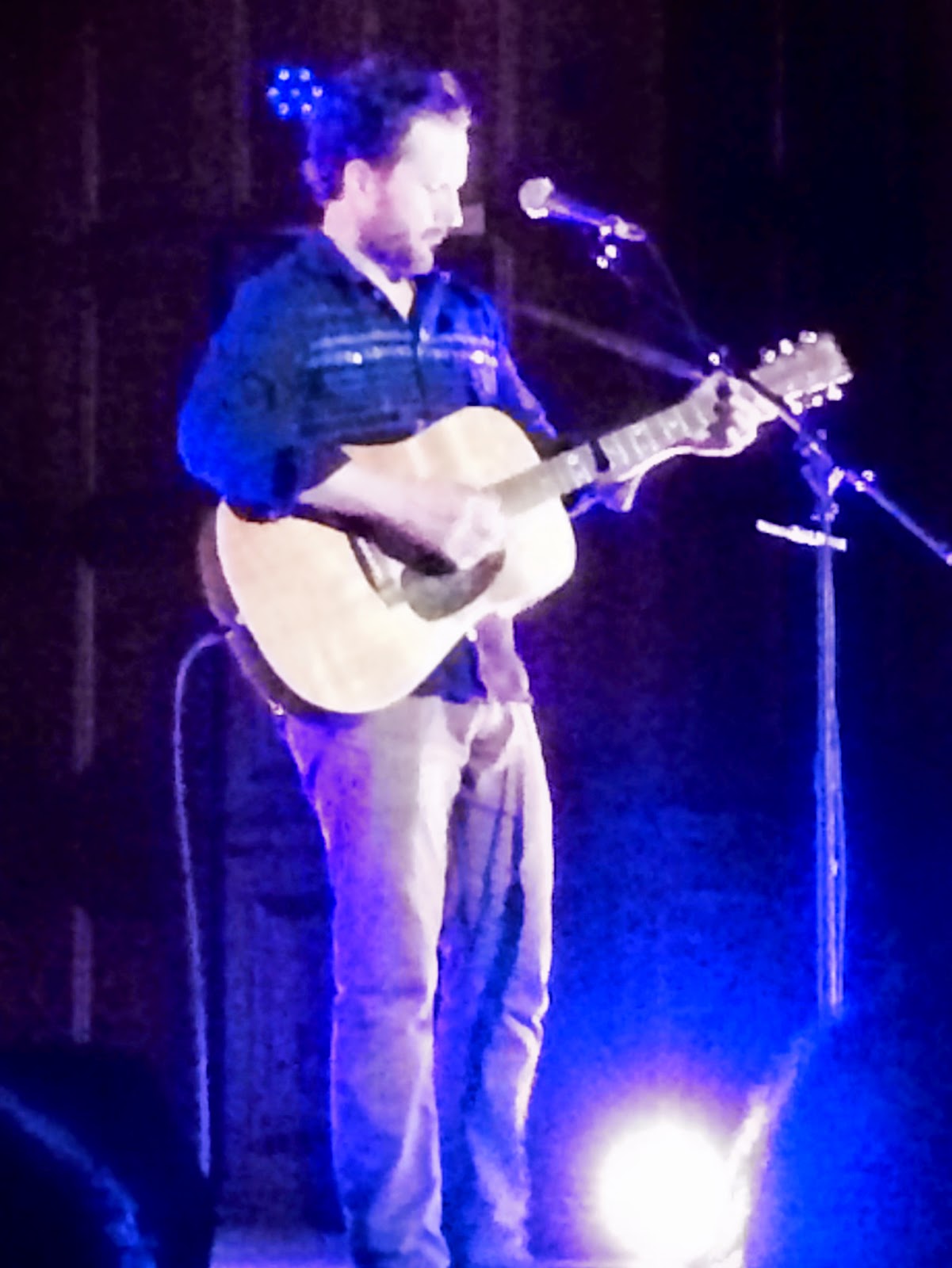 Anyway ... Jennings clearly still has superfans, and they all wanted to hear their favorite songs. From the moment he took the stage (altar?), requests were being shouted. He opened with "Wilderness" from his newest album, Always Been, which I just bought at the show so don't yet know. It sounded as good as ever, and the fans went nuts. I brought my friend, Amanda, who had never seen or heard of Jennings, and we laughed as she began to see how rabid some of the Jennings fans are. They LOVE him. "Adrian" was next, with the trusim line that goes, "Fear is where our hatred begins..." This was especially timely and poignant considering how the recent mid-term elections went. People very obviously - and stupidly - voted out of fear. But I digress ...

The whole congregation sang along for "Be Here Now", but many disobeyed that command by checking their phones and stuff, as they do, but the point was still made. The guy next to me had never seen Jennings live either, but had long loved his music after listening to it all the way across the country on a road trip. "I thought he'd have a white beard, and be older, like Sean Connery," he said. He does have that sage quality in his voice, but nope - he's a young, cool dude. The clap and shout- along was in full effect for "California" - always a crowd-pleaser when played here, even with the line about staying far away from L.A. 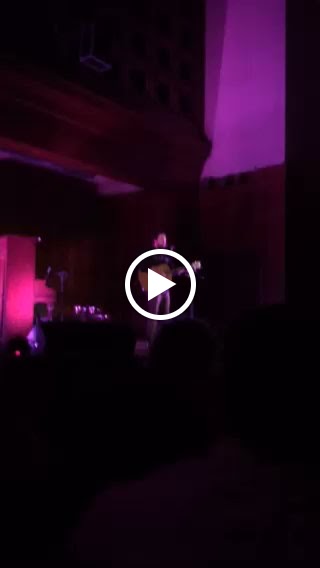 "Your New Man" is another one that's always a fan favorite, with its comedy about winning back an ex-girlfriend. As odd as it was to be at a show in a church (they must need the money or something?), I will say that the acoustics are fantastic. With only his voice and his acoustic guitar, the songs sounded exactly as they'd been recorded. Perfect. As was his sweet new song, "Rainboots". Another charmer, for sure. "The Light" was great as ever, and then Jennings introduced a new song, saying, "I read a lot ... I hardly ever write a song that isn't inspired by a book." Then he played "The Fisherman", but I didn't catch what book it was inspired by, as some girl was yelling about how he was a beautiful man - in church. The harmonica came out for this one, and got its own screams every time a note was blown. Superfans. 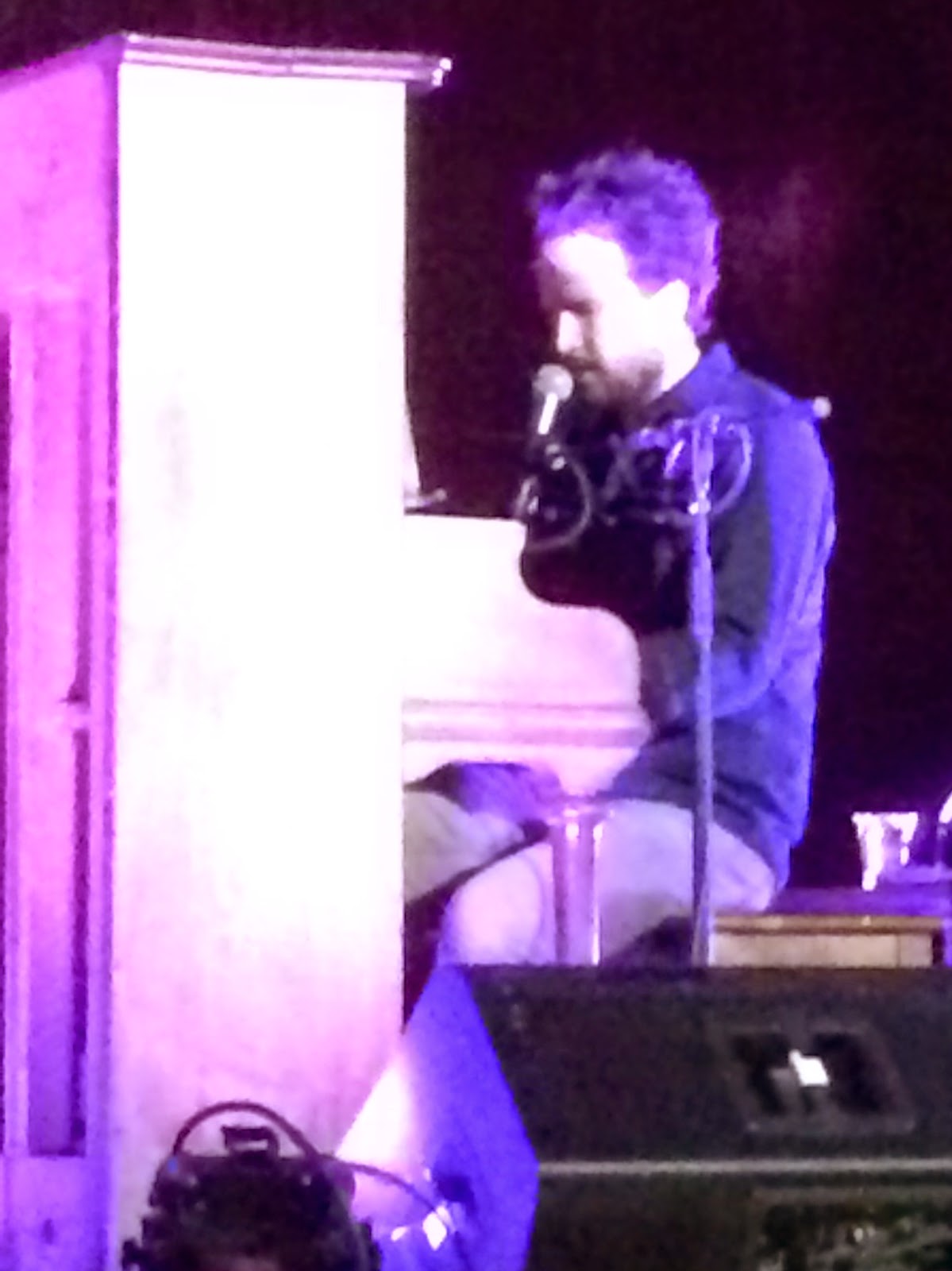 "Jackson Square" took us back to post-Katrina New Orleans, and then Jennings sat at the upright piano for "Bitter Heart", which he played beautifully, even though he said it was missing some keys (?).  Then it was time for a brand new one that Jennings said "Seems like it's against Florida ...well, it IS against Florida (ha!)..." and laid down "The Florida Song" as it's named for now. It was swampy, with a surf guitar vibe that he said was inspired by his Dad moving there, and True Detective. You'll dig it.

"Darkness Between The Fireflies" and "Nothing" were both as great as ever, and then Jennings invited out opener Lucette to join him for "Something About Your Love." Her voice and piano playing complimented the song perfectly, and the place was dead silent. Lucette got some new fans that night, including me. 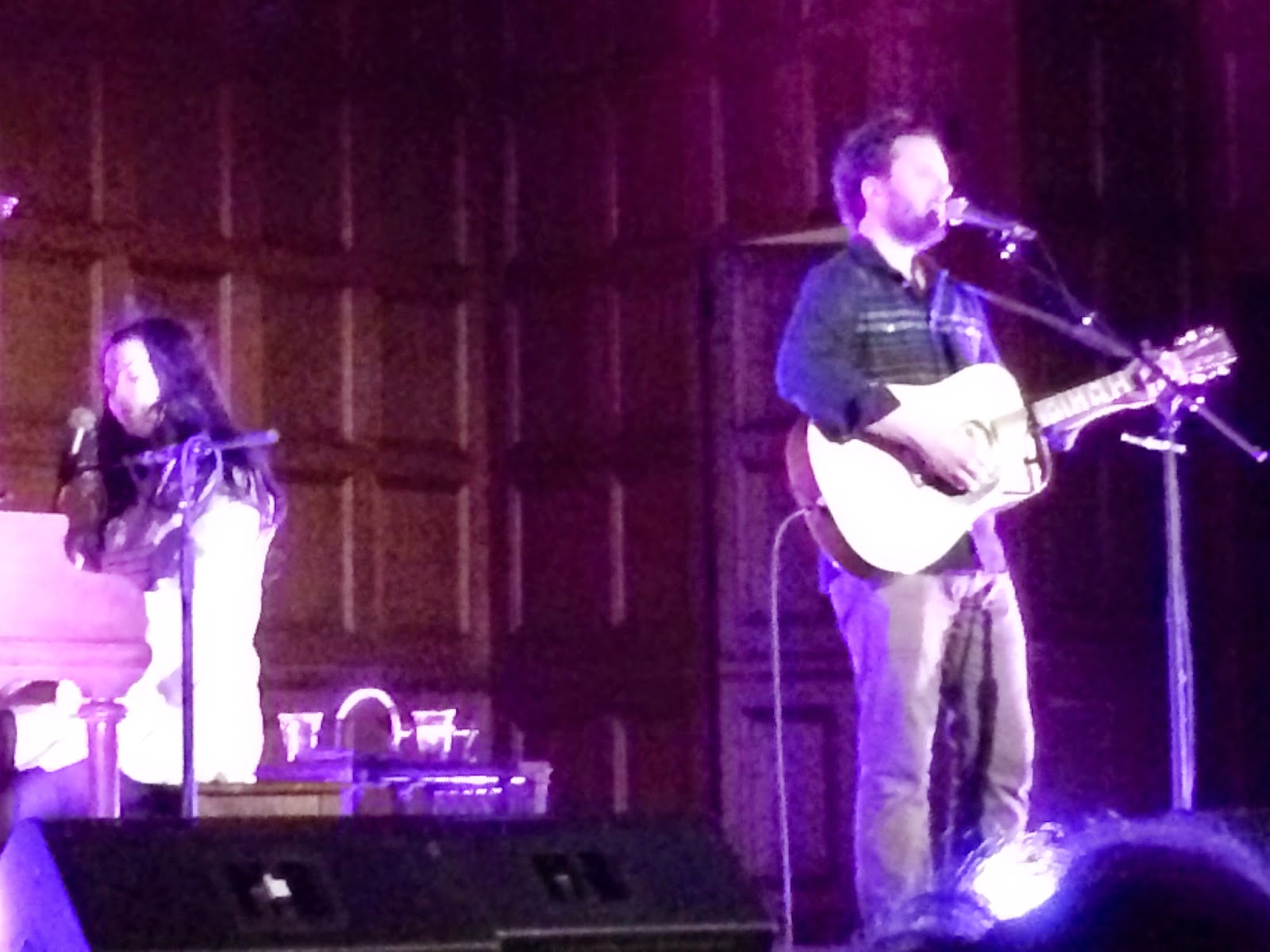 Speaking of fans, a guy in front of me was so happy and so into it the entire time, that I just have to include him. His face was beaming like this all show long, and believe me, he knew every word to every song, and had no qualms about chiming in. Unusually though, it wasn't annoying, because it was clearly so sincere. I was just happy for him. 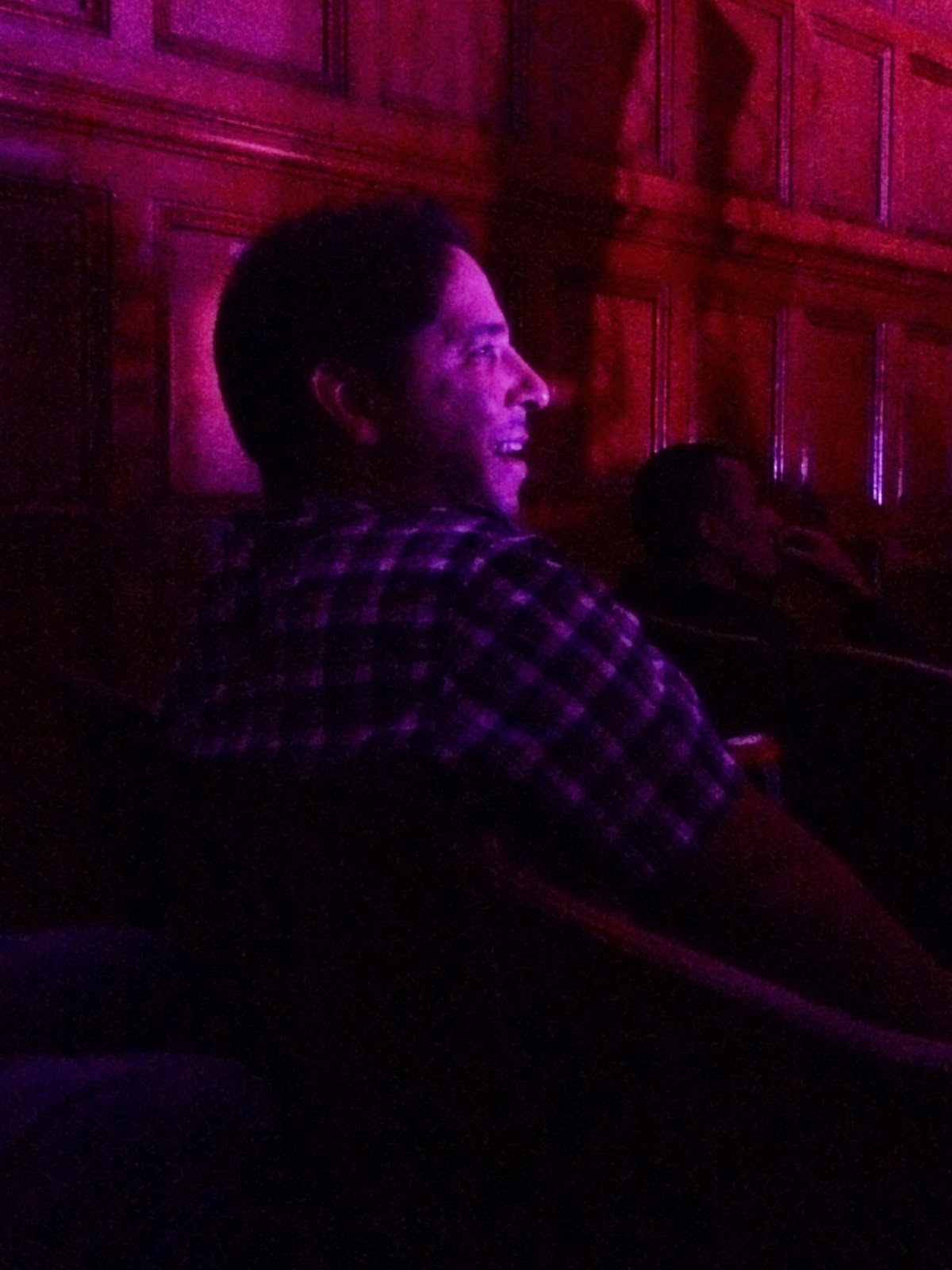 "Patti and Robert" was the song about Patti Smith and Robert Mapplethorpe that was inspired by reading Just Kids. I hope Smith has heard it. The end seems to be sung as her, in a falsetto that Jennings doesn't usually pull out. Great. "Crown" and "Ulysses" were granted to fans screaming for them. Jennings said that he just recorded a 2 song EP with Stone Gossard of Pearl Jam, but of course all ten copies were sold out by the time I got there. I'm sure it rules.

Jennings was back at the piano for "Sorry Signs On Cash Machines" and then it was "Thank you very much" time. Fans yelled themselves hoarse, but Jennings was cool and quick about it, coming right back out to play "Big Sur" with its great (and timely again) chorus, "This is as song to give you hope!" Thank you. We need that. 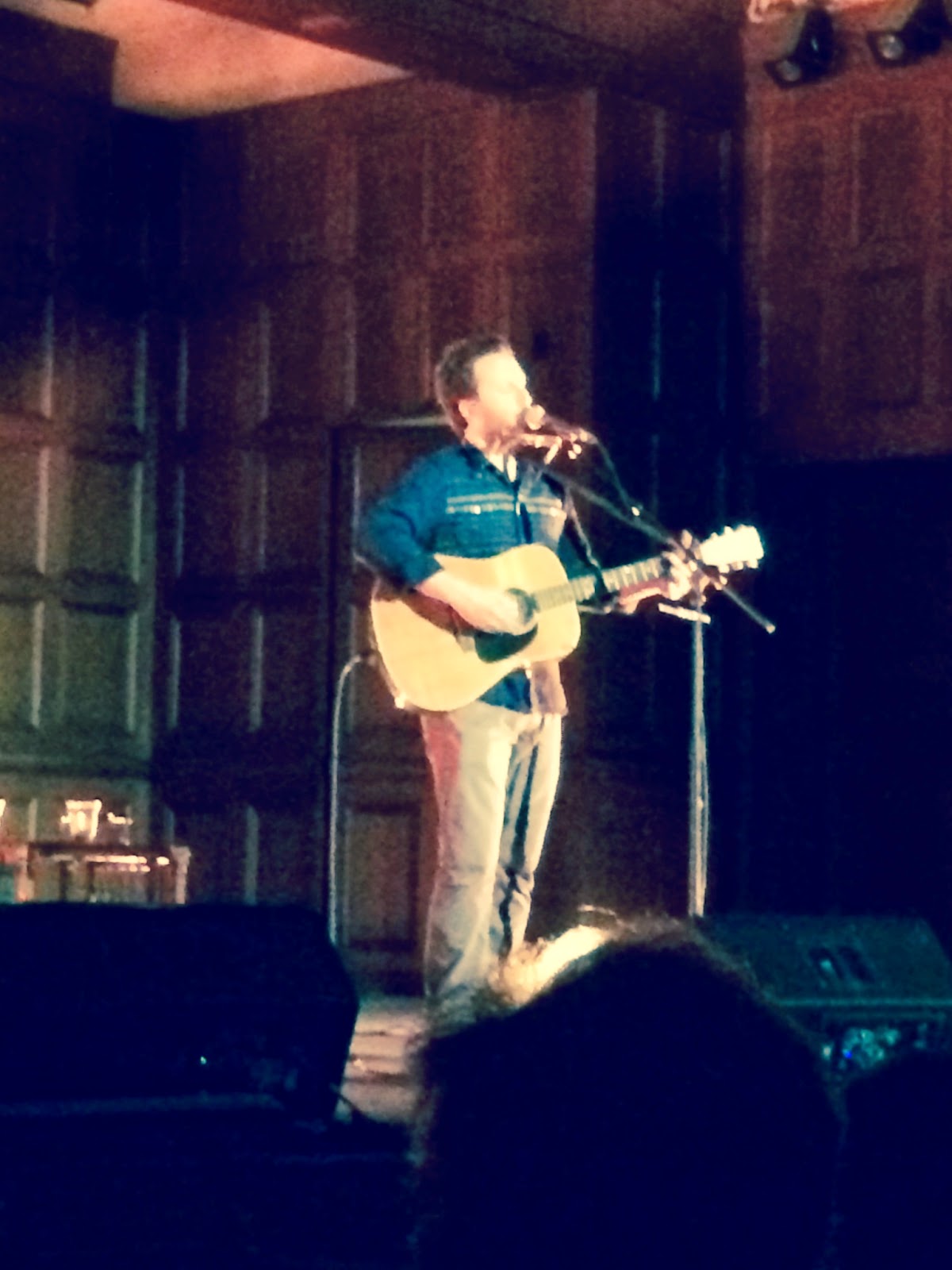 "1997" is so visual, and tells such a story, as all of Jennings' (and all the best songs) songs do. Love it. Then Jennings said, "So, what's the last song gonna be?" The cacophony  of requests was deafening, but somehow Jennings managed to pick out "Fighter Girl" and play that as his finale. A standing ovation was his, as Jennings took his bow and promised to come out and meet people in the narthex.

I had to split so did not get to congratulate Jennings on his great gig, but then when I got home, I had a brand new song waiting for me from his brother, Matt Jennings. Matt and I have been working on a songwriting project for a couple of years now, with me on lyrics and Matt on amazing music.  Please enjoy this first listen of our new song, "Western Sky Home".

This world is blessed to have the Jennings guys. Their talents make the place a whole lot better.