This was one of the most fun Halloweens in recent memory, for sure. It began back in the Summer, it feels like, with spooky Halloween decor showing up on houses on an almost Christmas level. I've never seen as many houses getting so into it, as the adult takeover of the holiday continues its advance. 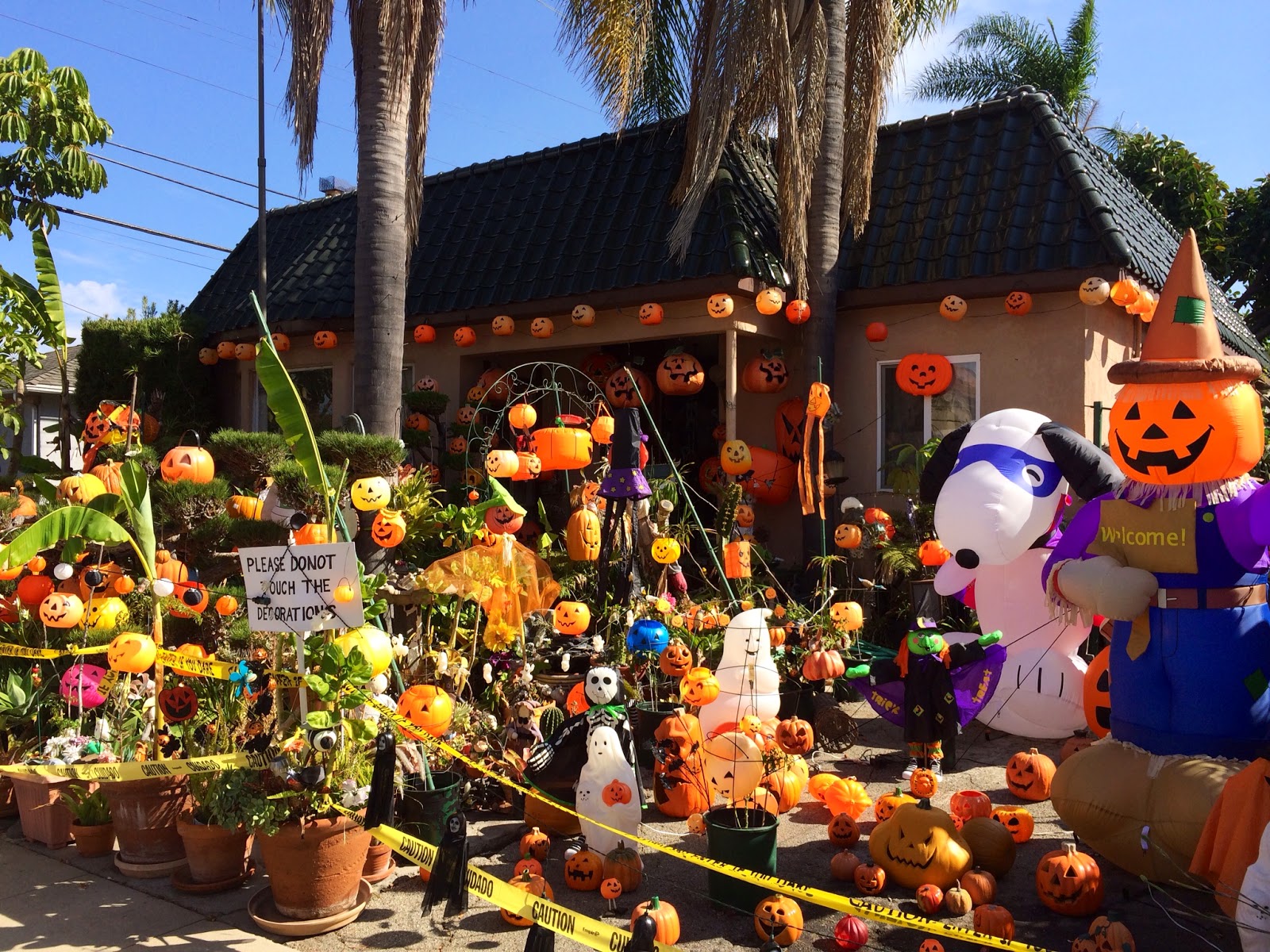 The place to be in Venice for Halloween is Rialto Avenue, and this year was no different. The street was blocked off so kids ands their handlers could roam freely between the extra-decorated homes without worrying about cars. One house was better than the next, and so much candy was being handed out that kids could hardly carry their own bags of the loot. 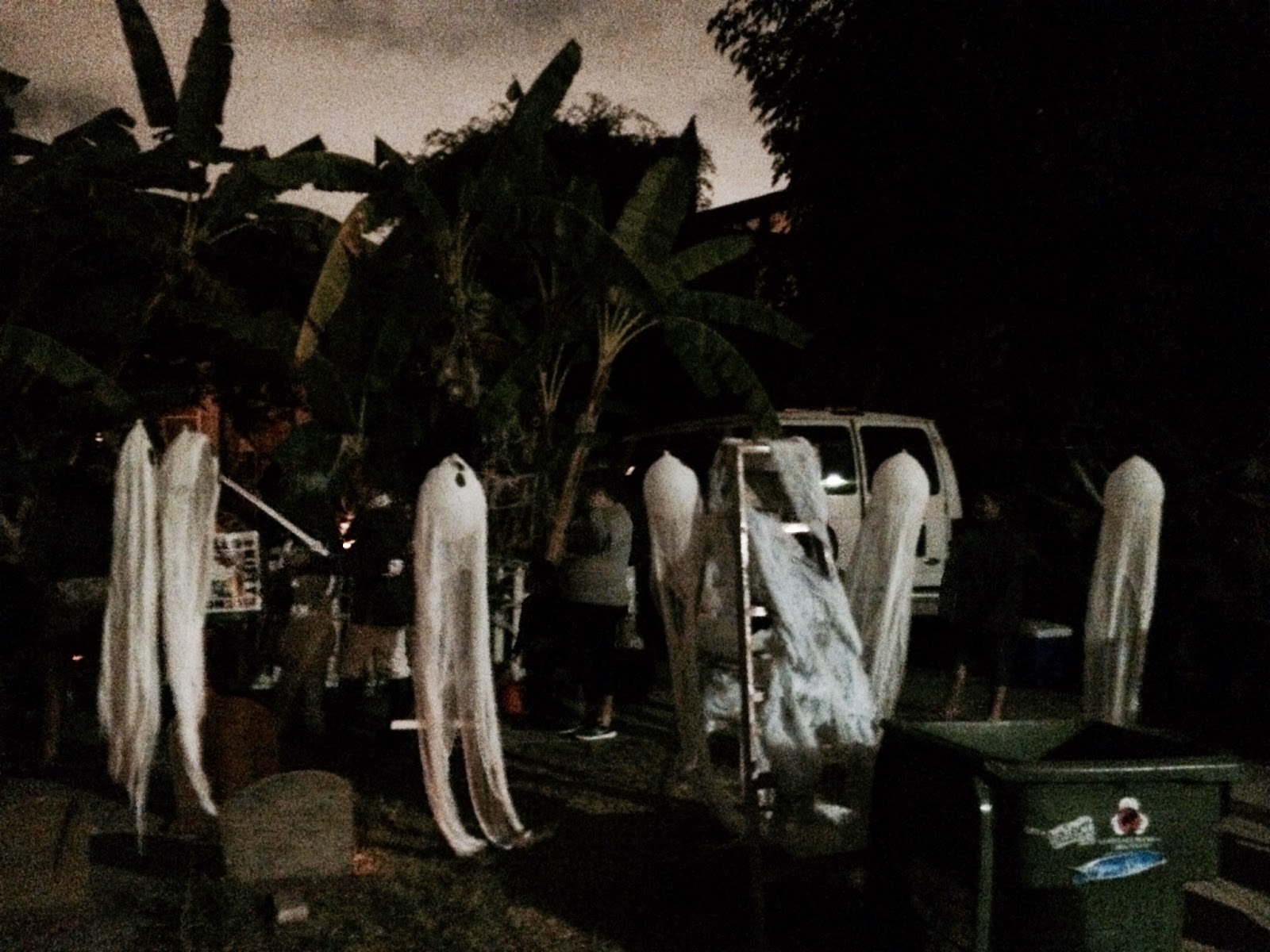 I had to speed-race up and down the block, as this was another one of those over-booked holidays, but I certainly saw enough to be impressed. 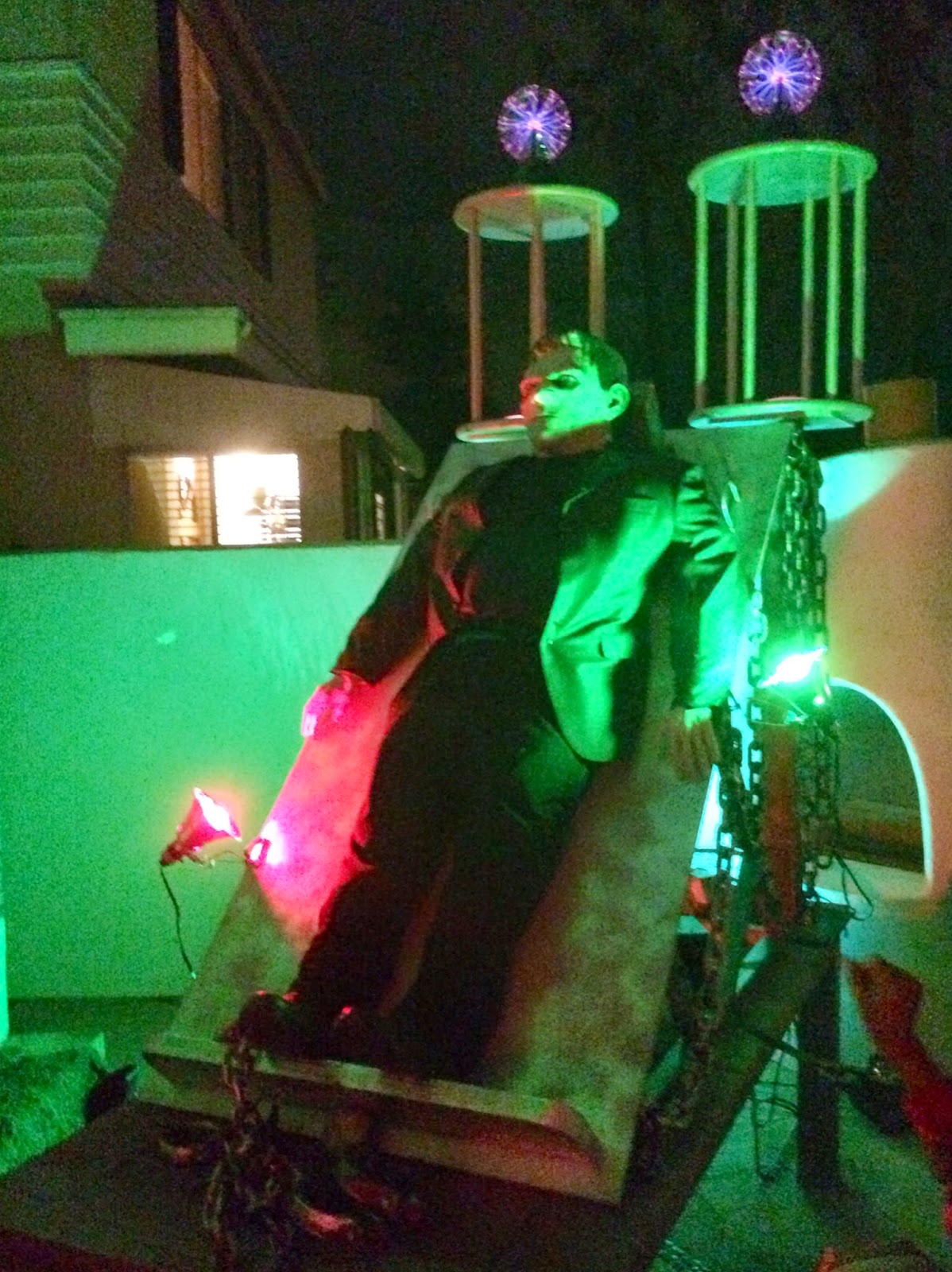 People went all out, with full on horror vignettes, not seeming to care at all if it might be scary for little kids - good! 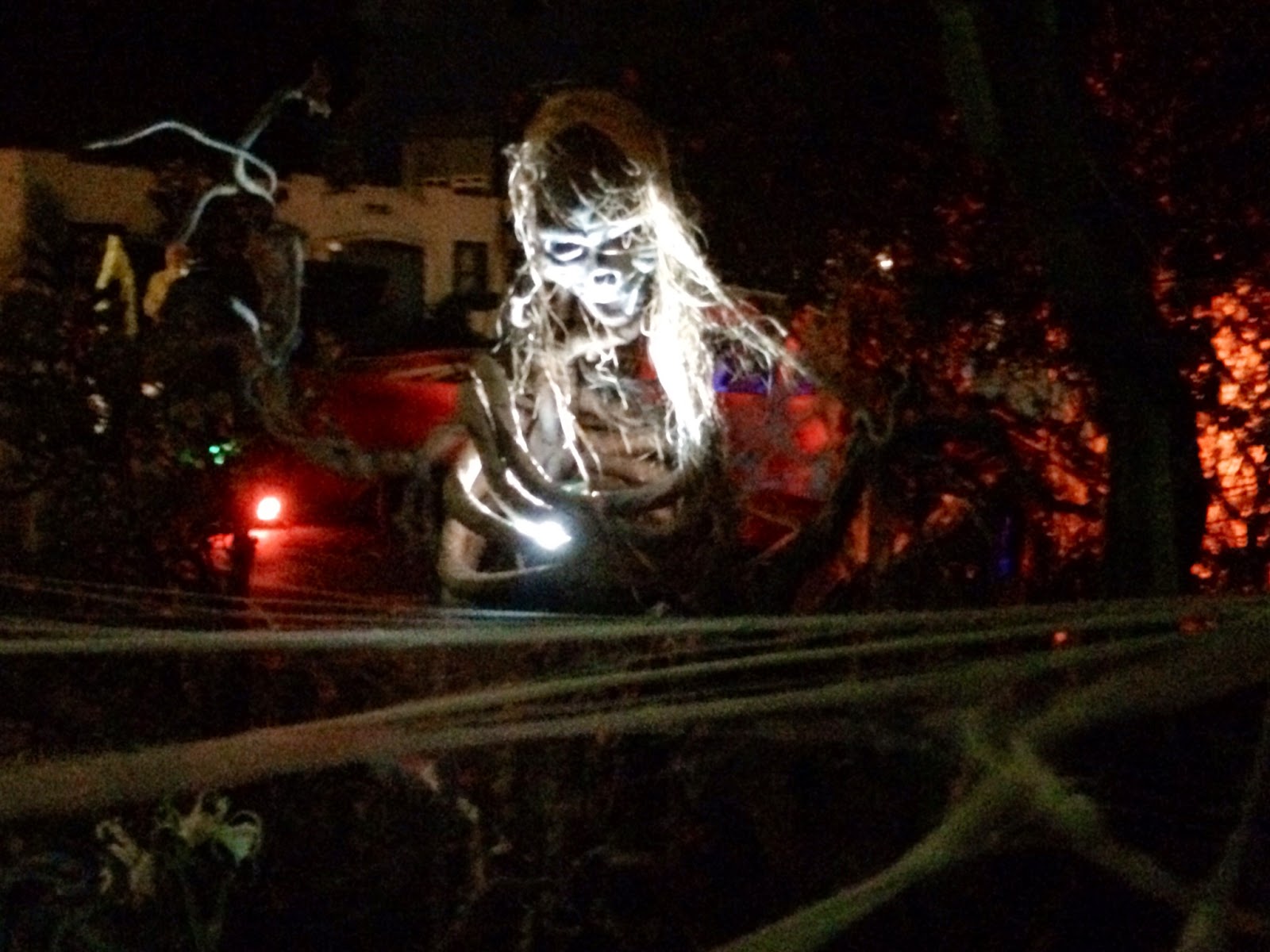 My friends Russ and Harry live on Rialto, and out-did themselves, as usual. From costumes to decor, people on Rialto mean biz. 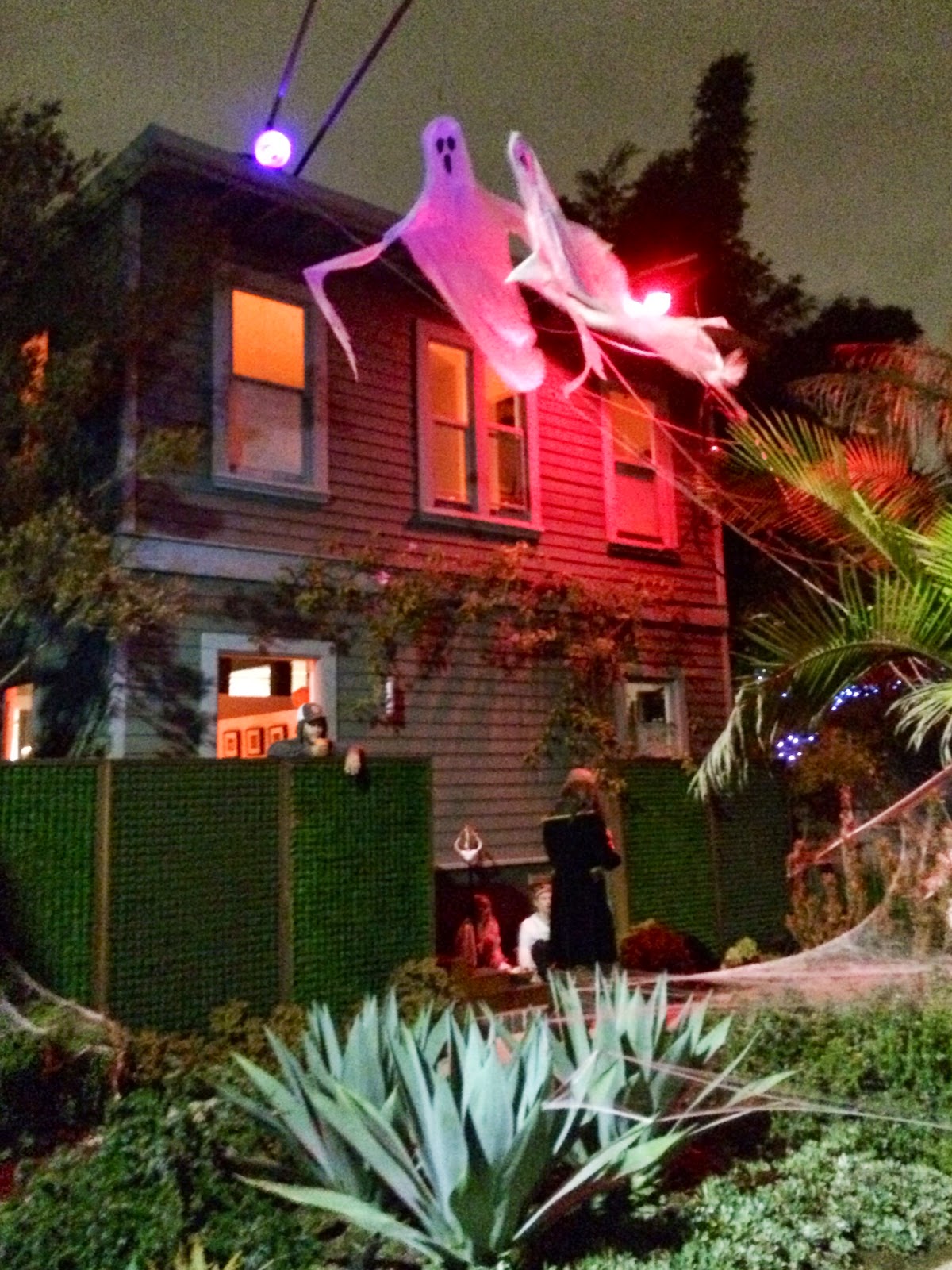 The Dragon house was again breathing fire, delighting all who passed by. Live bands played in driveways, and sidewalks got congested with all the kids squeezing past to get to their sugary reward. 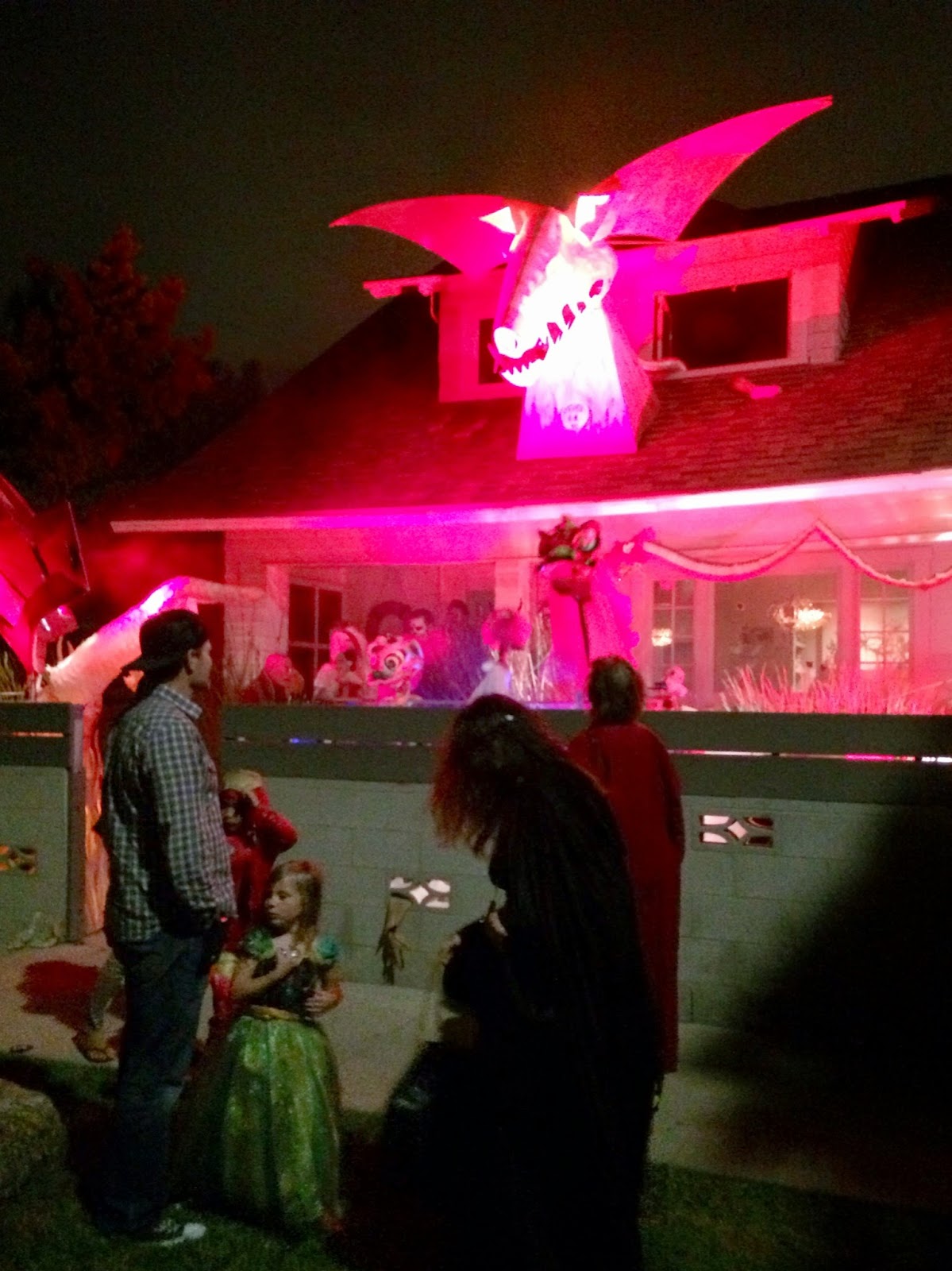 I didn't look at my photos until the next day, but among them seems to be a real ghost. I swear! It was this shadowy and black and white without my doing and I don't at all remember taking it. OoooOOOOoooo! 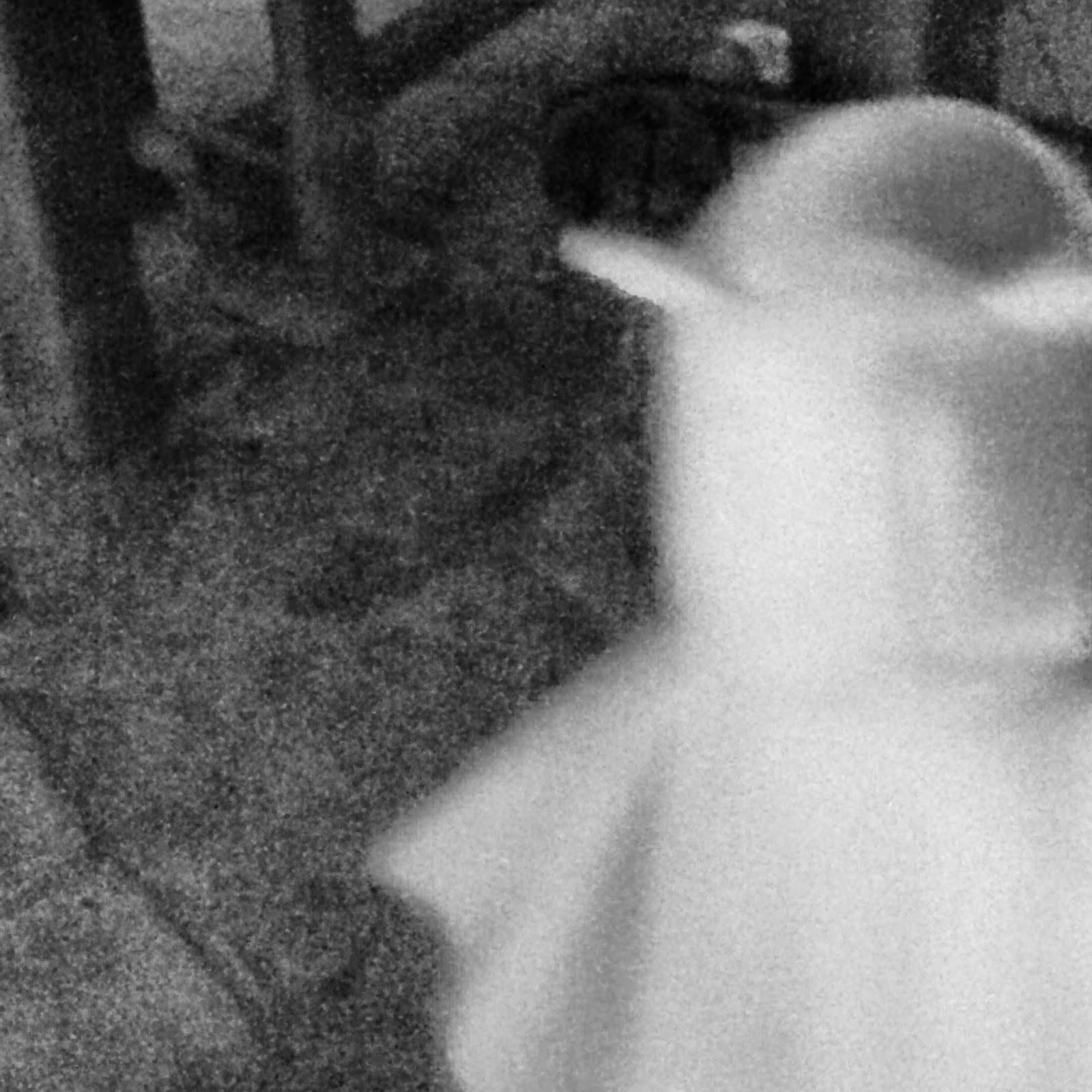 I couldn't linger long as I was going to see the Queens Of The Stone Age at the newly refurbished and fabulous Forum! This was the first time I've been to a big, real concert on Halloween, and it was a complete blast. 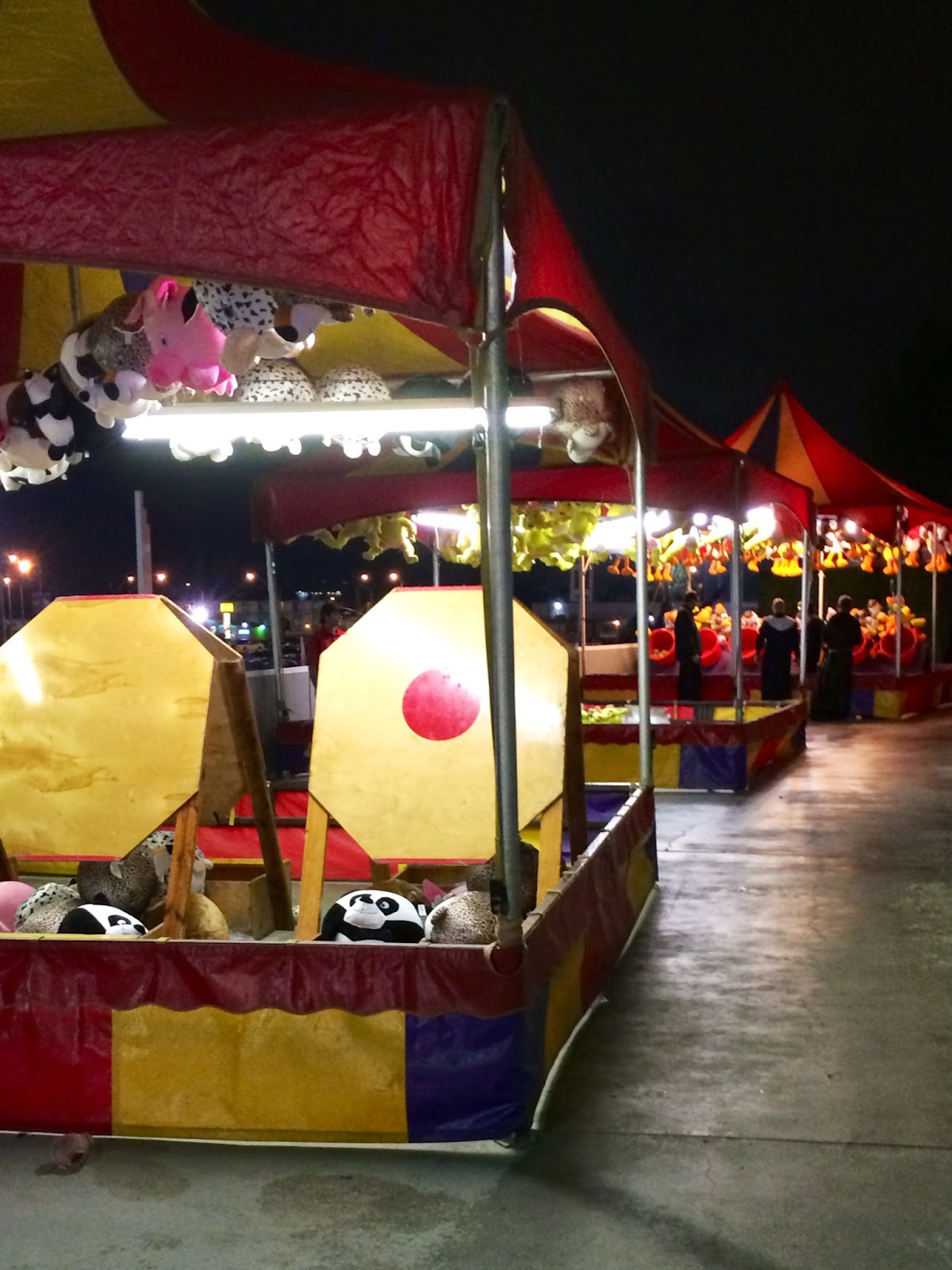 Everyone was into it, in full costume, as they made their way into the Forum after checking out the circus-y side show attractions and haunted house put on by Queens in the parking lot. We didn't get there in time for all of that (because of Rialto, which is a must), but I heard it was real scary. 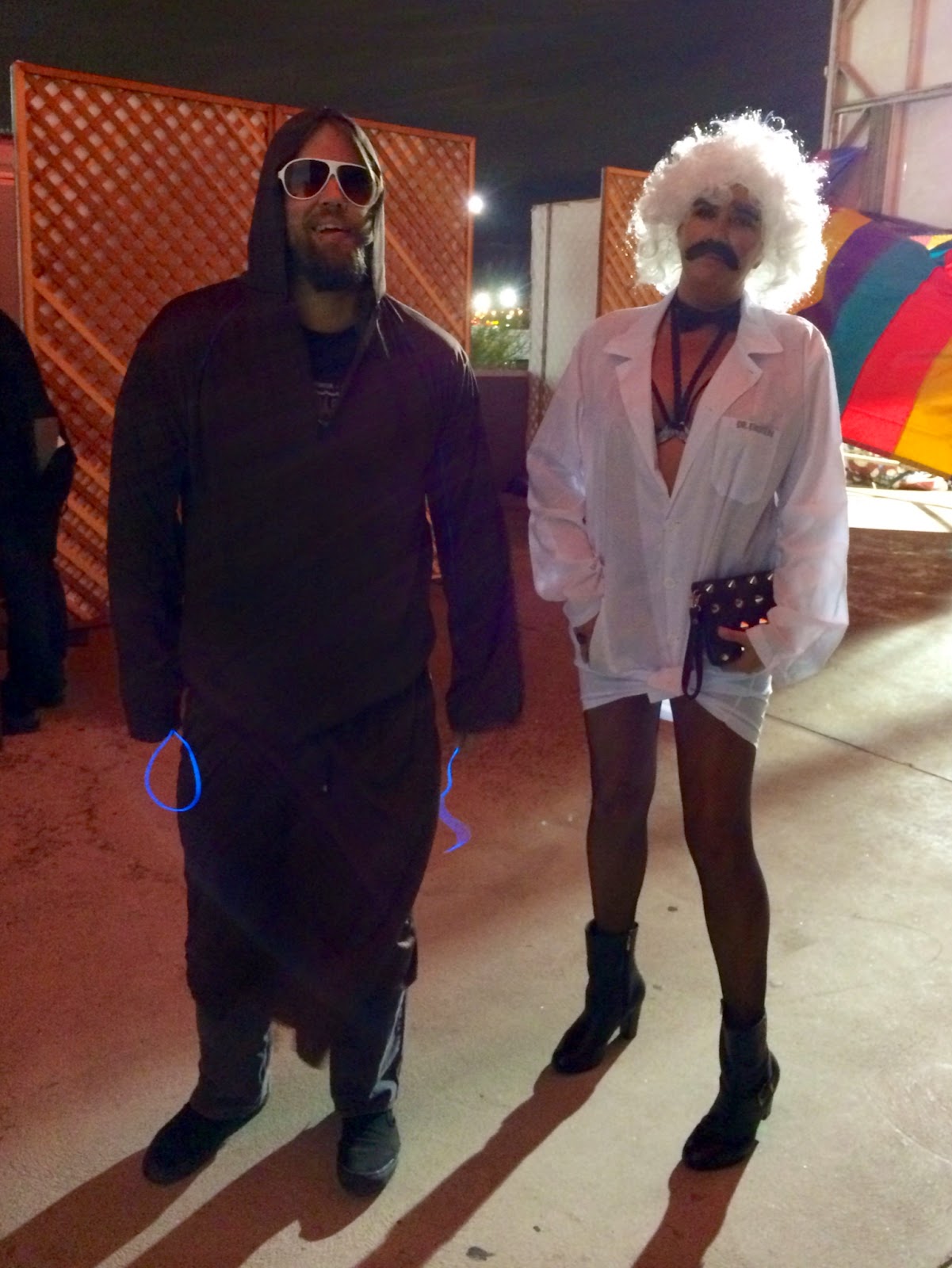 Costumes ranged from Queens (and Kings) of the Stone Age and Vampyres (of time and memory) Josh Homme (a tall dude in a red wig) concert-themed get-ups,  to a full sized lobster, lots of John Snows, a few American Horror Story clowns and a full dumb range of sexy cats (REALLY?! My least favorite costume every year) which I railed against in my PSA costume of Sexy Einstein. Smart is sexy, Ladies! 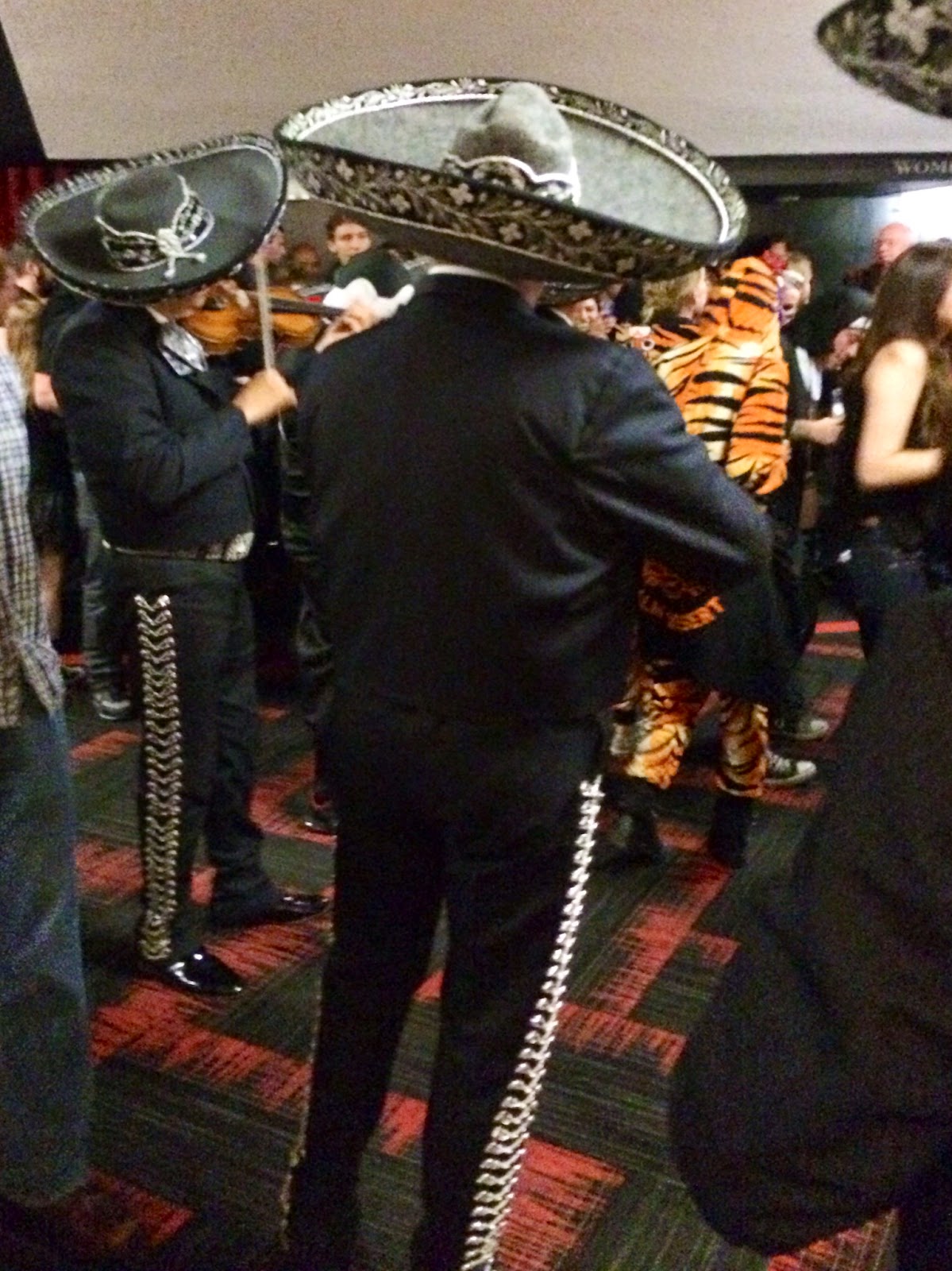 Mariachis strolled the concourse, lending it all an even more festive vibe. Nick Oliveri and The Kills opened the show, and sounded great from outside, but we were in Halloween party mode out in the lobby and missed them. I waited too long on securing tickets and wound up with a nosebleed pair, but it didn't even matter. Queens will rock you, front to back, top to bottom. No one is safe.

Queens took the stage in priest costumes (!) and people went bezerk from the opening number, "Keep Your Eyes Peeled". Like BEZERK. People leapt to their feet in the last, highest row - and stayed on them the entire show. People were moshing so furiously, I was thankful that many of them had squishy costumes to pad and protect them a bit. Whoa.

We were in full party/enjoyment mode, so I didn't really take awesome notes (or take any good photos), but you can just read the set list and pretty much know how hard it all rocked. "Feel Good Hit Of The Summer". "The Lost Art Of Keeping A Secret". A fun maraca opening to "My God Is The Sun". Josh Homme greeted the crowd by saying, "There's a shit ton of candy out there! What a night! This shit should be illegal! ... This is our last show for a long time (What?! Sad!!!) ... Fucking Smooth sailing ..." And they gave us fucking "Smooth Sailing." Awesome.

"If I Had A Tail" went right into "Little Sister" and then Homme said, "How 'bout something dark and dirty?" So they aptly went with "Someone's In The Wolf". After "Vampyres Of Time And Memory", Homme commented on how great all the costumes were (there was a pre-show contest in a boxing ring set up in the middle of the floor, manned by Suicide Girls - I hope it was won by a Queen of the Stone Age), and said, "That haunted house nearly scared the dick right off my body!" I'm not so bummed I missed that. "Are you having a good time, L.A. fucking Forum?!?!" The answer was a deafening YESSSSS! Man. 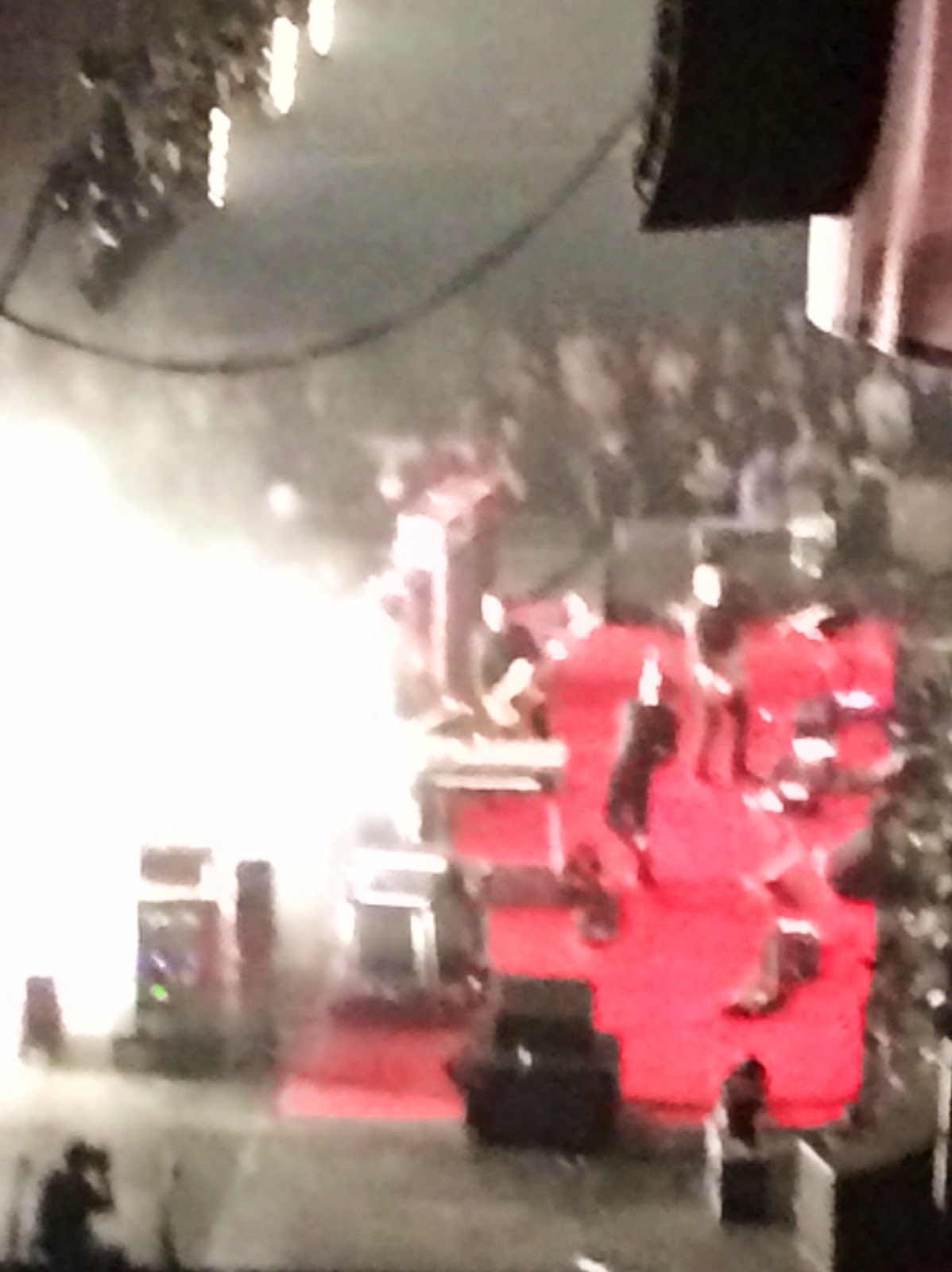 I love "I Sat By The Ocean" (they did not play my favorite "Kalopsia", but that's cool) and of course, "I Want To Make It Wit Chu"always keeps the party going. Speaking of parties, Homme said, "You could be at some stupid party, but instead we're at a stupid party together." As I was Einstein, I can solidly tell you - this party was nowhere near stupid. It ruled.

"Regular John" and "No One Knows" were followed immediately by "Go With The Flow" and "You Think I Ain't Worth A Dollar, But I Feel Like A Millionaire" in a flurry of punches that left us feeling like we'd been in that boxing ring after all. That needs to be noted ... QOTSA are RELENTLESS. It just never lets up, in one of the most exhilarating live rock experiences you can have these days (but not for a couple more years now, I guess.) They're so tight it's ridiculous, which comes from all the shows they've logged over the last couple of years all over the world. Super, extra impressive. "Happy Halloween!!!", shouted Homme, as the band left the stage to pure, ecstatic fan thunder. 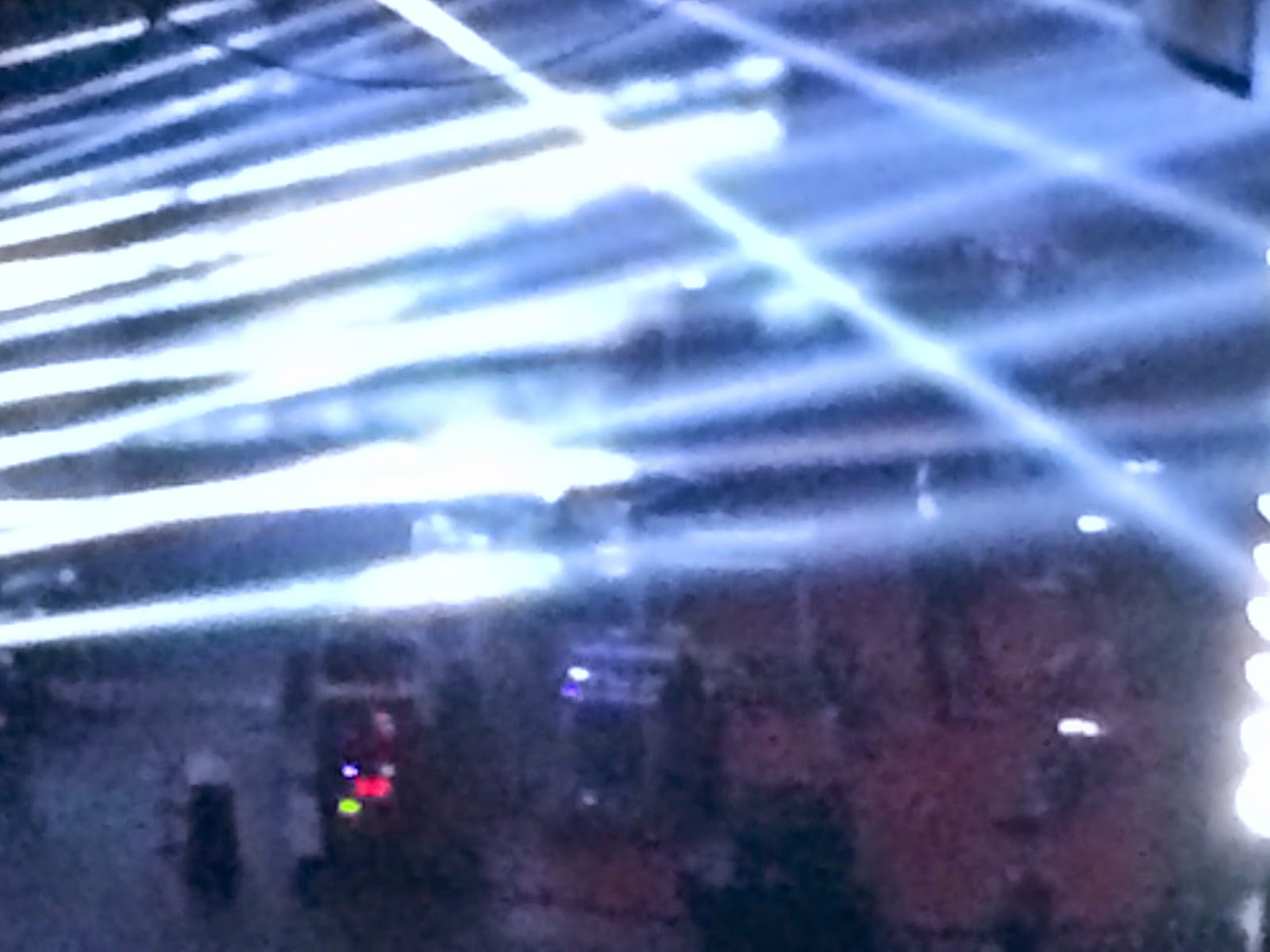 A couple minutes more of yelling and they really would be playing Songs For The Deaf. The priests blessed us again, and came back out, this time with their friend, The Devil (Nick Oliveri). "Together they blazed through "Six Shooter", "Auto Pilot", "Another Love Song" and "Gonna Leave You", which all ruled, but vocals should really be left to Homme. Sorry, he's just worlds better when it comes to singing. A nice reunion, though. 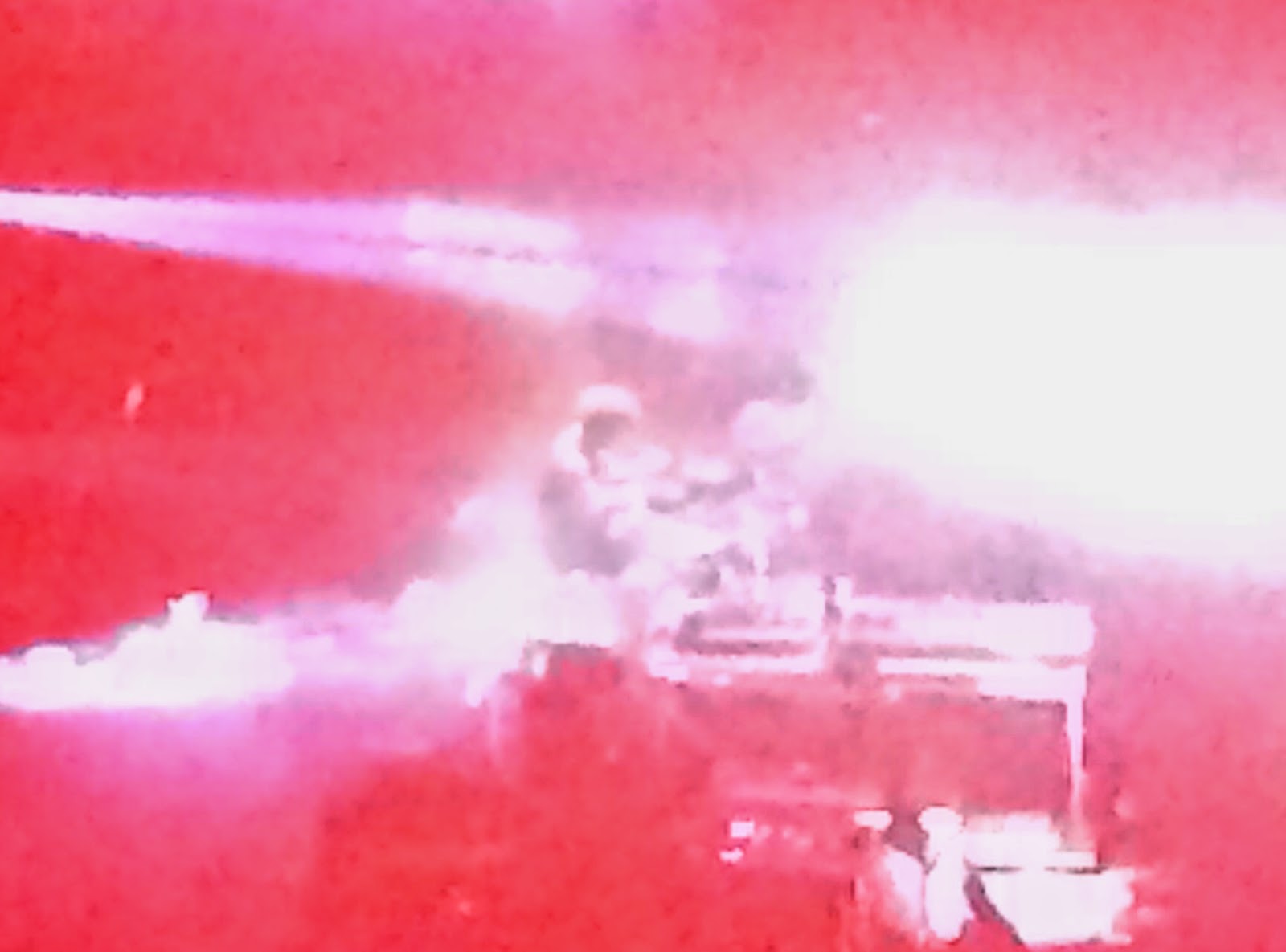 Fittingly for a Halloween show, Queens ended with "A Song For The Dead". They just went completely off, none more so than Venice homie and drummer, Jon Theodore. His laser-enhanced mid-song solo actually lifted the people OFF of their feet, airborne with rock bliss. A girl in front of me was banging her head so hard, I think her scalp came off (though it may have been a wig). 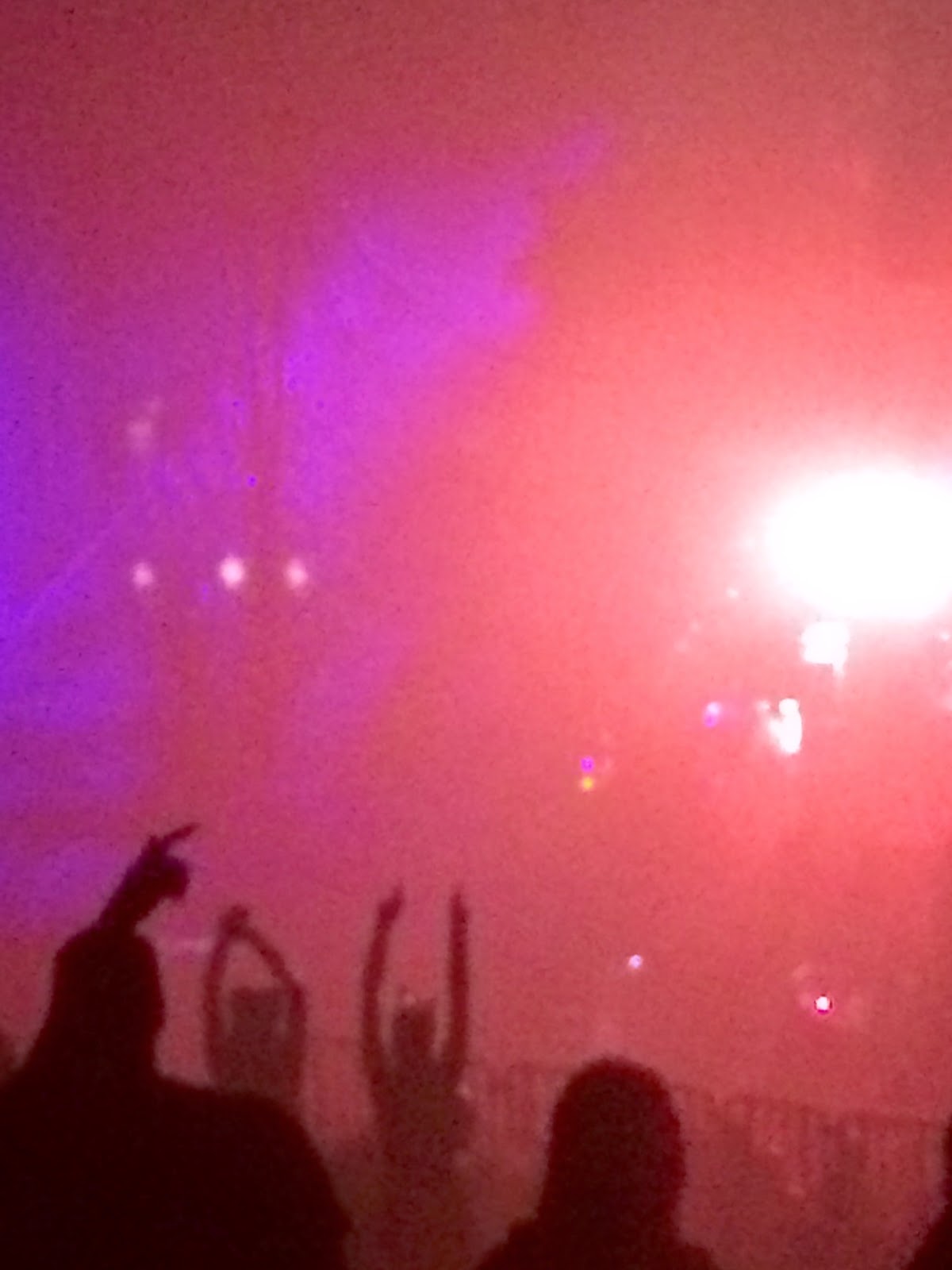 As the last chord rang out, cannons spewed out black and orange confetti endlessly while the band took their bows. "We'll see you in a couple years!" and from the sound of it, that's gonna be a very long time to wait for these rabid fans. Carny music came on and the costumed masses poured out of The Forum only to find that it was FINALLY RAINING IN LOS ANGELES!!! 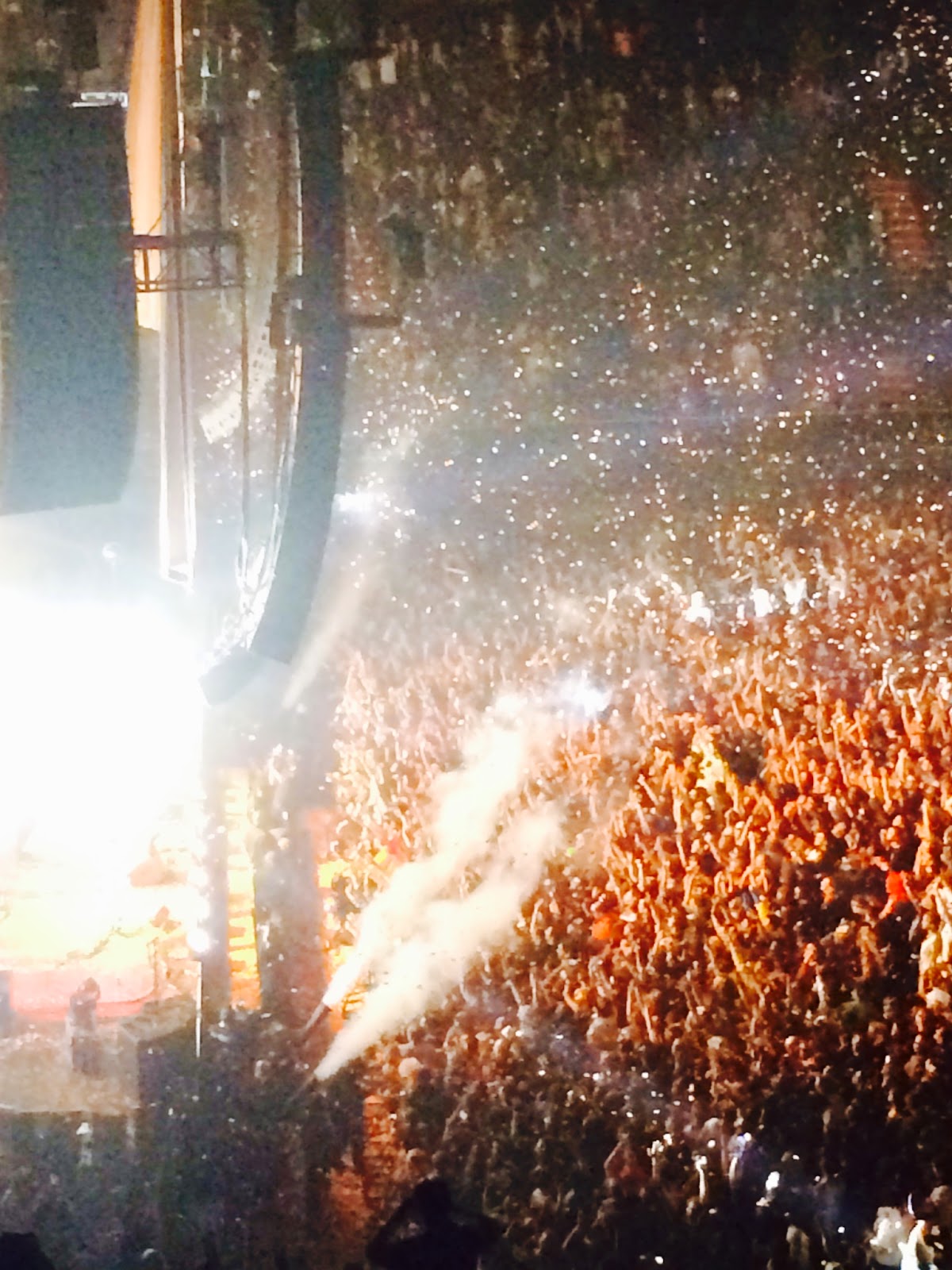 No spirits - good or evil - seemed to be dampened at all by this. People ran to their cars, skipping and dancing in the puddles on their way to whatever trouble they'd get into next.

Halloqueen '14 is in the books - as one of the very best times ever. Hope yours was too!