Monday morning. June Gloom. Fatigue. Responsibilities. Chores. Goals. Ideas. But first, I must commence the week with a walk along the shore to refresh my mind, and my appreciation/
observation of my beach. News has been bleak all over the place, and then there's your own life to handle every day. It can tend to feel like a lot to deal with. Especially when you have a bit of a party sore throat whine leftover from the weekend.

Which is why it is so classic to live in Venice, breathe in the salty morning air mist, go get your Cough Shot/Cold Buster combo at the Fruit Gallery, and come back outside to see this otherworldly creature coming down the Boardwalk, on a scooter towing a stuffed grocery cart. 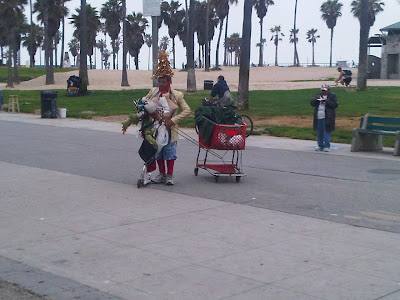 His hat reminded of a Thai Temple, a mannequin torso tied to his own, all sorts of other stuff, and not batting an eyelash that he was somewhat bonkers looking. I'd fiend to know his story - and will get it one of these days - but I had no materials with me, and he was also in the middle of a bit of a verbal skirmish with one of the Mad Max ones down there, so I thought I'd steer clear-ish for the moment. Whatever was going on, both wasn't my concern, and also didn't matter. What mattered was the mischief and spirit that would compel this guy, who probably doesn't have much at all, to get all done up as a human art installation and give the gloomy week's start a kick in the pants! At least I took it as such. 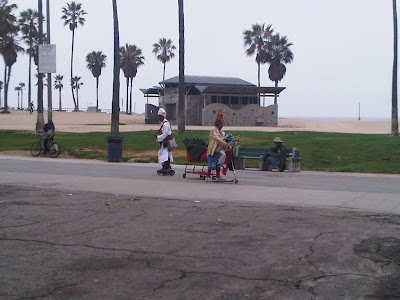 We were standing there, gaping in a bit of awe at this dude, when here skated the Cosmic Crusader (aka Harry Perry)! We see him many mornings getting his juice in his Clark Kent daytime persona, but he's rarely turban-ed up so early. I asked him what was up with that, and he said, "I can't tell you."

Ahh. More mystery and intrigue to the soft parade of this Venice morning.

And all of us in it together.