There's been a lot of talk lately about how the Boardwalk vendors aren't really that Venice anymore. Cheap Chinese jewelry sets from Santee Alley for $2.00, and packaged incense and soap you can get anywhere seem to be more prevalent than local arts and crafts created in front of your face by local artists following their bliss. There are lovely and spirited exceptions to be sure (the ones you'd likely read about here), but ask anyone standing around the beach Police station early Tuesday mornings for the weekly Boardwalk booth lottery, and you will get an earful about how scarce the legit artists seem to be down there these days.

Which is why it's so great that there is a new Art venue straight under the shadow of the lit-up VENICE sign hanging at Windward & Pacific, called Artisan Venice. Fittingly, and poetically justified, it is in the exact spot recently vacated by the chain Coffee Bean & Tea Leaf that locals wanted no part of. From the hand painted sign to the art spilling out on to the sidewalk (most often actively being worked on by a local artist right then and there), it is clear that Artisan is by and for Venice artists. 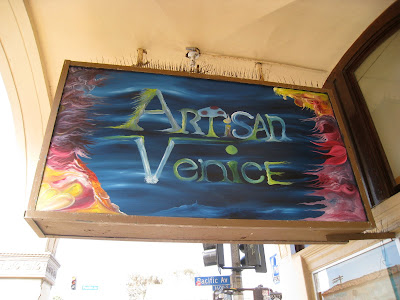 I happened to be biking by after being juggled by another story subject (Sigh. Los Angelenos, you CAN be better. You don't HAVE to be flakes!), and thought, "Oh, right. I can go check out that corner place that's not open yet when I bike by early mornings and see what's what." So I cruised on in, and one of the guys inside saw my Minnesota Vikings shirt (same colors as Lakers, and I have school spirit) and said, "Are you from Minnesota? Discount on anything in here if you are!" Well, that cemented the friendship immediately, as it does, and I shook hands with co-owner, Darren Hall, also from Minnesota. Duluth to be exact. He had a few minutes, so I sat down and learned about the spirit of the place, while smelling the foggy air and acrylic fumes of the skateboard painter working right outside. 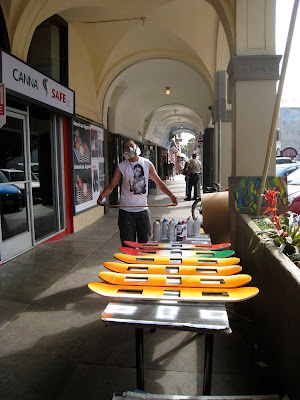 Darren grew up and went to school in Duluth ("In the third largest white ghetto in the United States", a fact I did not know), and though he loved music and art, his track seemed to be heading towards a thrilling built-in HVAC career, courtesy of his step-dad's biz, like most of the other guys in the area (at best). But then he thought it was time to go and introduce himself to the Father he'd never met, a guy who blew through Minnesota back in the 80's on tour, named Daryl Hall. Hall of Hall & Oates. (In a stroke of sheer synchronicity, H & O are in the news today for canceling their Arizona gig in protest of that state's dumb immigration stance. Good for you, Hall & Oates!) After the somewhat awkward backstage meeting, Darren went on tour all over the world with his Dad's band, and saw a lot of cool things. He wound up visiting a cousin in L.A. at one point, who brought him down to Venice. He straight away thought and knew, "This is it. This is home." (I remember that exact feeling myself, and could probably look up the exact day in the archives, as profound as it was.)

After some stints doing awful collections phone calls, and the much more fun video game testing, Darren got a gig working at a smoke shop on the Boardwalk, where he developed good relationships with a slew of glass blowers, and learned to love, as he put it, "the Boardwalk Hustle". After a while of that, and helping the business owner to prosper, he began to have thoughts - and a lot of encouragement from locals - of opening his own business, with his business partner, Steve Avila (an Ohio boy). They tossed around ideas, among which was a 24 hour, cheap and good pizza delivery (which we could still use, by the way, guys!), and just knew that "whatever it was gonna be, no matter what we were gonna do, it was gonna be cool". 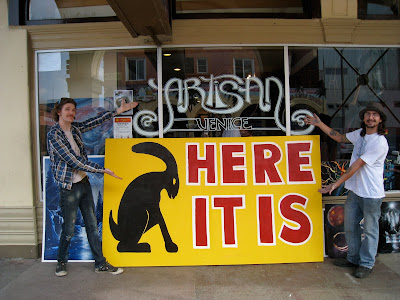 Knowing that he could get a ton of glass merchandise to open shop with, they began there, until hitting on the idea of creating a space for ALL Venice artists to show, create, and sell their works. It is a space that is "evolving daily", but that you can see is already a welcome and welcoming spot for art of all kind. When I was in there yesterday, there was the fore-mentioned guy out front spraying boards, there was a guy inside painting on t-shirts, and we were surrounded by the art of Venice artist, Jules Muck, on every inch of wall space - their first one person show. From handmade hippie chick dresses (that I love) to hand knit beanies, to those brilliant locally blown glass pieces and earthy jewelry - also being pliers-ed together right there by one guy - it is abuzz with the spirit of creativity. 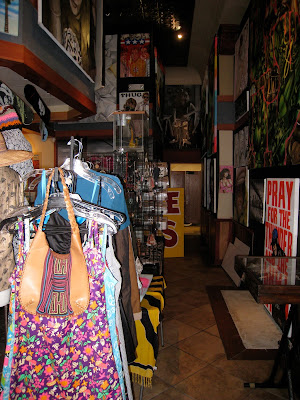 Darren and Steve want artists to not only know about the space, they want it to be USED, and encourage artists to contact them about doing their actual work in the shop. I asked Darren how he goes about choosing the art, and he said, "We take anything. I don't judge art." (Um, I would like to introduce him to my college art professor that I'm still a little scarred by. Jerk.) The idea is that everybody gets 1 spot in Artisan, as you never know what someone is going to like. Then, if it does well, maybe they get some more spots ... you get the idea. Oh, and "They have to love the thing they want in here. People can tell." Meaning, you made something you love and want to share that with people, not buy junk downtown at marked down prices and then come down here to jack it up to sell to Boardwalk tourists. 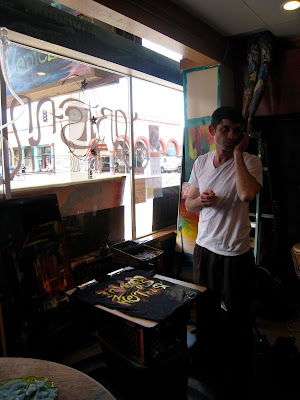 This is all very important for Venice, as there is no shortage of complaints about how art isn't as accessible, and commerce has become such the bottom line. Not at Artisan. The love and community vibe is genuine, as evidenced by the stream of people stopping in to say hello or show their latest work to Darren and Steve. 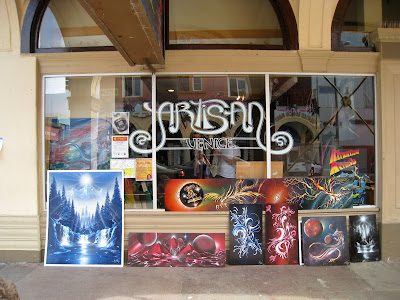 To add to the fun, they've been hosting live music on weekend nights, to a full house that spills out onto Windward's sidewalk and makes full use of that VENICE spotlight. An Australian band saw the drum set in the corner last week, and asked if they could jam. They drew a crowd, including the long truck from Fire Station 63, whose Firefighters lined up to join the rocking mix of neighbors and tourists.

As for those tourists, it is Darren and Steve's hope that Artisan Venice will become one of those "Must See" spots when out-of-towners make their Venice pilgrimage. As it should be. It's always cooler to point to that bright, trippy spot on your wall back home, and say that you got it on a sunny day in Venice, California, by a friendly person that you got to know a bit while they created their work and shouted out greetings to their buddy from up the street. Cooler yet to know that no one else has it. It is original, and colorful, and maybe a little daring - just like the town itself. 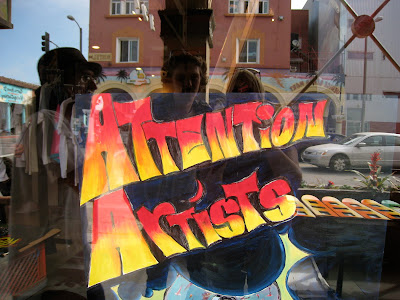 Artisan Venice is supporting local art like perhaps no one else is right now. Let's return the favor by supporting them. Like Darren said, "Come in and believe!"

Located at 80 A Windward Ave.