If you have the music in you even just a little, then the new documentary done by the marvelous band, The Good Listeners, is going to be one of your new favorite films. Don't Quit Your Daydream (Winner of the Nashville Film Festival's Special Jury Prize) had its L.A. premiere last night at the Egyptian Theatre in Hollywood, and it was a packed house of friends, fans, and fellow dreamers that laughed and applauded the entire time.

The film follows The Good Listeners, Nathan Khyber and Clark Stiles, as they embark on a road trip in big RV across America to record an entire album - a song a day - with a stranger collaborator in each city they chose, and document the whole thing in what would wind up being the movie we all cheered last night.

As both guys were nearing 40, and both were unwilling to give up their rock star dreams (after having tasted early success as a part of the 90's band, Absinthe), they wanted to do something extreme to express their music, and also to reflect upon themselves and where they're going in their lives. They had tried to get work scoring films, and when those opportunities grew scarce, they just decided to score their OWN film. They've done unconventional recording before - 10 songs in 10 days holed up in a cabin for their debut album Ojai - but this was their biggest, and most urgent feeling, endeavor yet.

The film is deeply touching for anyone that, frankly, has a pulse, but especially for those who entertain their own musical or artistic dreams, that can seem so elusive at times. The people they meet along the way, and the music and friendships they create (in one day!), show not only the power of music, but the power of humanity.

From Joshua Tree recording in an "Integratron" space alien thing with a real cool hippie banjo player named Bingo, to the lushly gorgeous visual of recording ON a swamp cruise in Louisiana with the Cajun Man, Black, accompanying them on accordion (made all the more poignant with the tragedy of recent oil spill events wrecking everything down there), every person and place they visit is both memorable and inspiring.

In New Mexico, they meet up with a "Nuisance/Collaborator" called Lane and make music in a metal shop. In Texas they play with a guy named Paul that makes music using old video game sounds. In Memphis they play/learn the blues with an old mechanic named Daddy Mack, whose fatigue with life is transparent, even as he tells them about blues notes and how "You gotta lay it back" when you play them. In Louisville, they collaborate in a beautiful horse barn with their friend and producer, Adrian Grenier (Yeah, Entourage's Vince). They visit the Kentucky Derby with him, and learn about how "The world is beautifully unfair", when they can't get a room themselves, but Adrian makes one call and they get two fancy hotel suites. Sure enough.

The kids at the Paul Green School Of Rock in Philadelphia give the guys hope for the future of music, and let them reconnect with their original feelings about music. A guy named Christian in New York is struggling with the choice between professional baseball and a music career, also lending musing points to our Good Listeners, as they reflect upon their own life choices, making stunningly lovely music all the while. 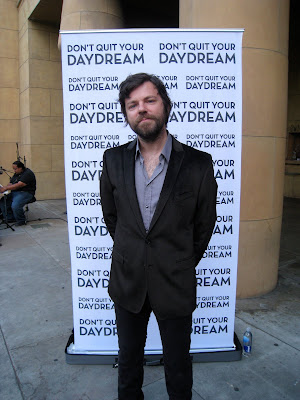 And that's the whole point. As Clark says near the end of the film, "Even if Nathan and I never make it big, we'll always have the music we made." Yes, they will ... and so will we. What a blessing that is, as is this fantastic journey they've created and shared with us. The film ends with the Collaborators saying bits about what music means to them, and Bingo says, "You should do what you love to do. 'Cause that's what you'll be best at." 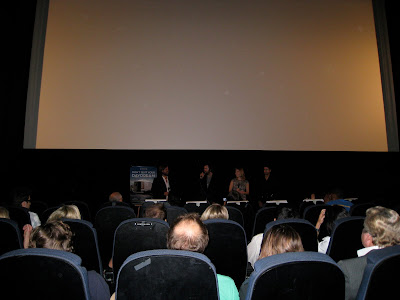 The evening wound up with a quick and humorous Q & A with Nathan, Clark, and Adrian, and then a live jam by The Good Listeners (and Friends!) in the Egyptian Courtyard, which left us all with the comforting knowledge that whatever happens ... we'll always have the music.

See Don't Quit Your Daydream (and listen to the wonderful album of the same title that they wound up with!) as soon as you can ... and take that title's advice deeply to heart.
Posted by CJ Gronner at 10:39 AM