Damian Wagner and his darling wife, Anne Greene Wagner, returned to live in Venice with their son, Luke (Skywalker), after a while on the East Coast. Only upon their relocation have I had the privilege of getting to know them better ... and the more I know, the more I am intrigued.

After chats at various social functions, where I kept finding out more and more cool things about them, I went over to their house last weekend to listen to the Earth Sounds Damian had recorded for a museum project in Brazil. And when I say "Earth Sounds", I mean - literally - the sounds made a mile deep in a hole reaching for the Earth's core. Sounds that must be heard to be believed.

The American artist, Doug Aitken, approached Damian about helping him with an art installation for the Instituto Cultural Inhotim (pronounced "In-Yoo-Cheem") in Brumadinho, Brazil. An installation that had never done before. Aitken's vision was to bore a hole a mile deep in the ground on the campus of the AMAZING Contemporary Art and Environmental Studies Center (that I'd never heard of until Damian told me about it), to record the sounds made in Inner Earth. Then build a "Sound Pavilion" (2009) to blast the sounds while visitors looked out at the 360 view of the natural landscape. 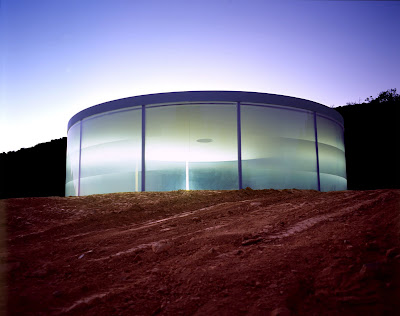 After a ton of research and experimentation, the exhibit is open in Brazil, and is currently blowing peoples' minds. It blew mine the other night in Damian's home studio, where he and Anne had us over to take a listen. You've really never heard anything like it. Damian said that some people were bursting into tears inside the Pavilion, as the sounds are so incredibly visceral, you really don't know how it will affect everyone. For that reason, Damian even had to consult with Doctors about the noises, "since we didn't want to kill people, or give them heart attacks." My bigger fear once I donned the headphones Damian handed me, was that I could go crazy. It's like you'd think Outer Space would sound like, but Inner Space. A deep humming, with occasional explosion sounds (magma?) and throbbing, otherworldly swells and pauses. I closed my eyes and tried to imagine looking out the glass windows at the Brazilian greenery while these sounds blasted out of hidden speakers, but don't think I did it justice. This place in on my MUST SEE List in life now, to be sure.

They had a lot of trial and error while building the Pavilion and digging the hole. The three microphones (or "Accelerometers") had to be encased in crystals (natural) and put in PVC pipes, then covered in sand, then loose gravel and rock, which would secure it down deep to pick up the Earth's vibrations, and then the vibrations are converted to sound. They had to install a water pump so if the hole filled up with rain, the whole thing wouldn't be ruined. They had to put limiters on the mics so the explosions (or whatever they are?) wouldn't blow up the speakers, since they blew up 4 different giant sub-woofers while experimenting. As Damian said, "I'd never experienced sounds like this before, there was no definition, and normal sound scales (EQ) did not apply. It's the Earth, Man."

They had a big disappointment when they originally tested the whole works, as they cranked up the sound and nothing happened. NO!!! But then Damian put his hand near the speakers and the vibrations coming off it you could practically grab onto, so they knew they had something and just had to harness the sound. Hence all the sand packing, etc ... and they finally got it to work and not only work, but STUN. Much like if you've ever seen lava flowing, or felt an Earthquake, listening to these sounds make you feel both connected to and dwarfed by the infinite possibilities of our Planet (and the Universe itself). 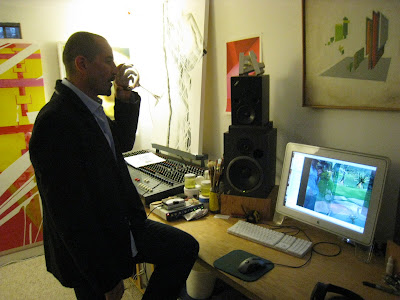 Damian is also a visual artist, of massive brightly colored sculptures and paintings alike, and you can look for a show of his new works very soon. Oh, and he's from Minnesota, so that makes him extra cool. His Dad ran one of the biggest mines in South America, so rocks, gems and crystals abound at his house, and probably gave him some insight as to how to approach the Earth hole digging. He creates it all in his back studio, where he also has his sound equipment. He and Anne (she is a singer and a writer, and comes from Baltimore, Hon!) recorded an album of songs together (D And A) that sound extra-modern and classic all at once. This is one creative family, as Luke's art projects and imagination already show the influence of his inspiring parents.

It just goes to show, how you can be just casually talking over cocktails on any given Venice night, and wind up learning about the most interesting stuff you've ever heard. Literally.

Thanks to the Wagners, for a scintillating evening of learning, awe and wonder!
Posted by CJ Gronner at 1:30 PM