I walked past the place every day for years having no idea what delicious cooking was going on inside. Our wonderful new(ish) neighborhood restaurant, Marla's, began as a catering operation on the corner of Victoria and Abbot Kinney (2300 Abbot Kinney, South side of Venice Blvd, across from The French Market), and only earlier this year opened up for public consumption, when Marla decided that she'd rather have a stool to rest on once in a while, vs. hauling food for thousands to events around town. Lucky us! 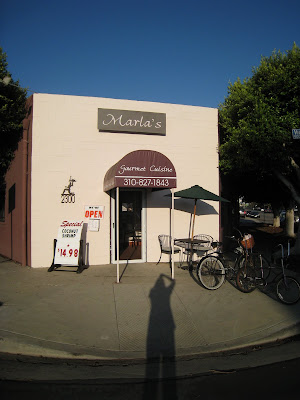 Marla Berreira grew up in Wisconsin, but headed out to California as soon as she figured out that one doesn't HAVE to be cold all winter (I get it, Marla). Then she traveled Europe solo, shipping her VW Van back and forth 3 times, adventuring all the while. She learned catering from cooking for dozens of friends on her little van hot plate, and naturally progressed, like people who follow their hearts do, to sorting out how to make a living doing what she loved to do. Feed people good old home cooking. I asked her how she came up with her menu - that varies from AMAZING tacos (I dig the carnitas most) to daily specials like Coconut Shrimp or Baby Back Ribs - and she said, "It's all just the things I make at home, that I love making." Well, you can't really get more comforting food than that. 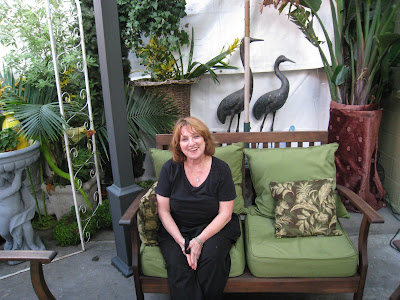 Comfort. That is about the best word for Marla's. You order and pay in the front part, (where there's a couple of tables, but you really want to sit in the back patio) and then go find a couch or table in the dominantly green patio that you swear is someone's house. There's a little subtle jazz or reggae playing as you settle in, with that bottle of wine (or beers. or flask. we've done all three) you brought from home - that doesn't require corkage. It feels like you're at home, sitting on the comfy couches or chairs, laid back ... with your dog chilling with some water beside you, if you have one. Marla's sons, Danny and Mathew work there too - for free, for now - as it's a total family labor of love. When Marla talks about her husband, Fernando, you can see by her glow that she's as in love with him as the day he swept her off her feet on a dance floor in Greece (though he's Portuguese). They've lived in the Venice Canals for years and years, so they're locals here, and know what the locals like. Family. Food. Comfort. AND Delivery! (3-9 p.m.) I'm in. And have been since the first day I walked in (Right, Jez?).

Her chips and guacamole are delicious, and when I asked about them, she told me how with corn chips, kids could choke on them, but flour would dissolve, so she started making them that way - and spicing them up with her special red spice mix. Well ... Yum. 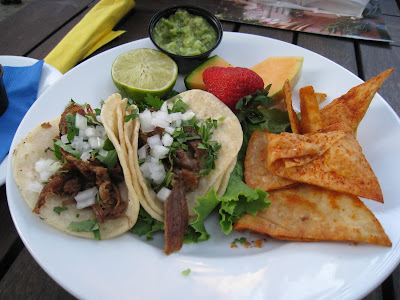 It's really hard work to run a restaurant, and I told Marla I completely admire it as someone who likes to cook. She said, "Well, you're putting food into peoples' bodies, what could be more intimate? And what a big responsibility!" True that. And rare to hear in this day and age of faster, less nutritious, eat on the run lifestyles people justify themselves into. No need, folks. Just head over to Marla's. Healthy, savory, and it IS fast - but you get to know people, and relax, in an environment that feels like home. Complete with reggae on the stereo.