Lidia's Pupusas - Meal on the cheap!

You're out biking around, didn't bring your wallet, but have a couple bucks wrinkled up in your shorts pocket. And you're STARVING. Hmmm ... The pizza by the slice on the boardwalk is pretty bad ... you don't eat hot dogs (never have, never will) ... you won't make it home without eating something ... what in the world to do?

What is this little place - literally a hole in the wall - with a half door facing Westminster? Pupusas? I haven't had a good pupusa in ages ... LUCK! Lidia's Pupusa's makes exactly that ... GREAT Pupusas! It is - by far - the best food I've had on the Boardwalk. It felt like chancing upon a street food stand on a foreign travel, only to have it be among your best meals on the trip. 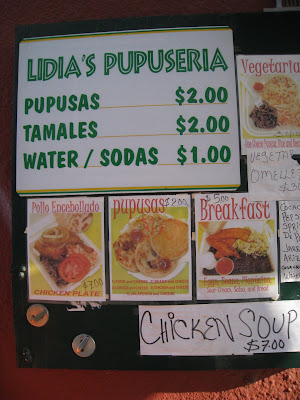 The proprietors, Ada & Vito, come from El Salvador, where from what I've experienced, everyone must be a fantastic cook. They've had Lidia's (1301 Ocean Front Walk, #11 - right off the Boardwalk on Westminster, across from Groundworks) for the past two years, after coming to the States 18 years ago. They named Lidia's for their youngest (of three) daughters - Lidia.

Ada has one of the sweetest faces I've ever been smiled at with: 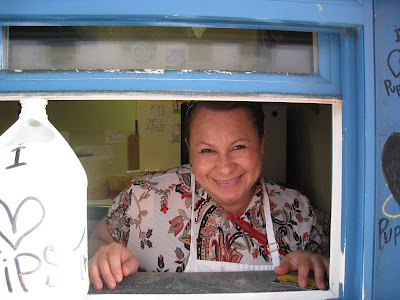 ... and makes the tastiest, freshest, most filling Pupusa's I've ever had - for $2.00! A delicious MEAL for what could be pocket change. I had the pork and cheese ("lorroco") pupusa, and my eyes rolled back into my head as I bit into the piping hot package of goodness. Tamales, Empanadas, Platano Frito - there's a lot more to try! I never even noticed the place until the other day, so you may not have either. I'm cruising over there again in a bit to turn a friend onto it ... meet us there, won't you?
Posted by CJ Gronner at 2:04 PM