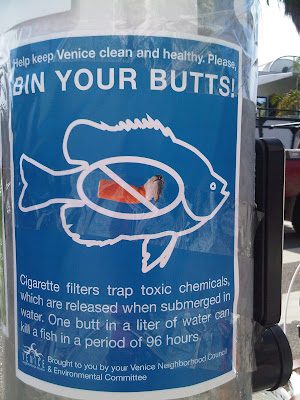 I love smokers. I do. There are many smokers among the most beloved people in my life. But it has driven me crazy for years when I see people throw their cigarettes on the ground. Or out their car windows. I've been in verbal altercations with people in cars because I can't let it go by without a scolding. Those cigarettes wash into the ocean, from all the way downtown, not just near the beach. I walk every morning along the beach and it breaks my heart every day to see that people don't seem to care that they are poisoning our whole eco-system. Murdering it. (You can check out Heal The Bay to get more informed.)

I was happy to see these informative signs go up recently on Abbot Kinney from the Venice Neighborhood Council, so I know that I'm not the only one annoyed by this bad habit. ONE cigarette in a liter of water will kill a fish in 96 hours?! So what's it doing to the smokers inside themselves? Eek. I've been watching the past seasons of Mad Men, and it's Smoker Central - even the gynecologist telling a woman that she's pregnant does so while smoking - and it just seems so out of date and strange. I remember a conversation I had where we were discussing Woody Harrelson or Sting or someone withholding having sex to preserve their chi or something, and a friend of mine saying, "I think it's hilarious that people still do that." It's kind of the same thing with smoking. I think with all we know about how terrible it is for you, that people - whom I love - still signing up to slowly kill themselves every day is kinda crazy. Like in the early 60's, people were advertised to that it was cool; now it just seems like every time you see someone light up, they've just been HAD.

But this isn't a lecture about smoking - it's just me being selfish because there are people that I want to grow old knowing, and oceans I want to grow old swimming in, and fish I want to eat along the way* ... so if you could please pass along that if you must smoke, at LEAST think of that choking fish in the liter of water and BIN YOUR BUTTS! Thank you. I'll appreciate you on each morning constitutional.