Still a little buzzed from the triumph of getting my stolen bike - DELORES - returned to me by Good Samaritans, and seeing signs for "FOUND Bike" on posts, I was feeling all proud of my fellow citizens, and thinking perhaps people WERE living a bit more like their better selves ... when my friend Nathan got his bike stolen from RIGHT in front of my place, in broad daylight, on busy Venice Boulevard. And not just any bike ... his FRESH purple 70's Schwinn Stingray, complete with Sissy bar. That he LOVED (and called his "Brumby" - Australian - look it up). Just a couple of days before, one guy watching us ride by said, "That bike is so cool I want to steal it." Though he was right, I was not down with the steal part, even in jest. Little did we know that two days later, that man foreshadowed this horrible incident - or WAS it him?!
Hmm ...

This is the last known photo of old Stingray (busy background, but we didn't know at the time it was going to be used for bike retrieval purposes): 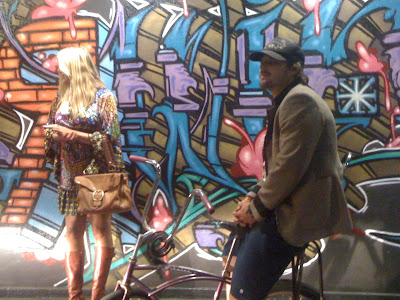 This Bike Thievery Corporation MUST be stopped. The Free Venice Beachhead, that was so instrumental in getting my bike returned to me, has proposed a column where people can submit their stolen bike photos for free in the hopes that we'll all keep our eyes peeled for them, and that really does work, at least in my case (what's happening with that, Jim?). Nath's bike was locked up to the street sign, with one of those coil locks, and it was snipped apart in one hot second. So - either use Kryptonites, or bring 'em in the house, for starters. But maybe there needs to be more defense - like what if we don't BUY stolen bikes for $40 or whatever the stealer is asking for that day? Then the market dries up. It takes a Village ... or a Boardwalk, at least. So please keep your eyes open for the Stingray - he's pretty hard to miss. Like, DUMB thief if they're still in Venice - straight asking for a pummeling.

Now I'm not sure if this is exactly a crime - but it's an annoyance for sure. The Other Venice Film Festival hoaxed us into paying $25 a pop to see Oliver Stone's The Doors last Friday, as it was to feature a Q & A following the screening with Val Kilmer, and a Maverick Award given to Mr. Stone. I got a whole crew to get their "sure to sell out" tickets online, and had the Doors pre-party at my place right by the SPARC venue. We get there and it's nowhere near sold out, there's no Q & A, no Oliver Stone, no Val Kilmer - and I'm not sure there was ever going to be. It seemed pretty falsely advertised to me, and we split right after a little dancing to Sugarbitch (cool), because I just got the movie for my birthday, and we didn't need to spend 3 hours in folding chairs to see it again, when we could watch it for free - and with good libations - at my house. I was very much looking forward to sharing with you the insights of filming that iconic Venice film - and instead ... Lame. Oliver & Val - let's make a raincheck date of it, shall we? Cut out the middle man ...

The last issue to deal with today (OK, other than STOP LITTERING! The recent rain made our beach absolutely filthy from people all over the city throwing stuff on the ground like dirty mental patients. Stuff that washes out onto our beaches, making people sick and killing marine life. STOP IT!!!), is a little problem down at our new Skatepark. The homeless folks appear to have been sleeping in the bowls (I get it - wind protection, but you don't need to leave a huge mess behind, do you?), but the LAPD decided that the guys from VSA can't post overnight guards there anymore, and won't watch it themselves, so that jeopardizes the Skatepark, because as we all know, once something anywhere becomes a "nuisance", the thing can very easily go away. And we're not going to let that happen to our new and beautiful Skatepark, are we?? Learn more about it here, and then ...

Put on your capes and tights! Thanks.
Posted by CJ Gronner at 1:28 PM