I've seen Norman Ollestad around Venice for years, but only more recently became aware of his dramatic life story. That's because I read his best-selling memoir, Crazy For The Storm. And so must you. It's downright flabbergasting. And one of my favorite books of the Summer*.

When Norman was 11 years old, a small plane carrying him, his Father, his father's girlfriend, and the Pilot crashed on the way to Big Bear, where young Norman was heading to pick up a trophy for a ski race he'd won. Norman was the only survivor, and the book alternates between chapters telling about Norman's upbringing, and chapters about his harrowing descent down the 8,600 foot icy mountain to finally be rescued. You just simply cannot believe such a little kid had not only the knowledge and skills to get himself to safety, but also the mental stamina that it had to take.

The upbringing chapters are what helps you to believe it. Norman's Dad (Norman Sr.) had him either surfing or skiing every spare moment since he was a baby. Literally a baby, as the back of the book jacket shows a black and white photo of his Dad surfing Malibu, with tiny baby Norman strapped to his back like a backpack. It's such a poignant photo, not merely because we know how their story together ended, but because it shows the trust and confidence baby Norman had in his Father from the very beginning of his life. Even though, lots of times, Norman would resent having to ski or surf when all the other kids were at birthday parties or watching cartoons Saturday mornings - it was those same times that saved his life. He had the skills and mental preparedness to handle those extreme sports, and thus, could handle survival.

It's an incredible book, and when I sat down to chat with Norman (and his very sweet 12 year old dog, Telluride/Telly) yesterday at the Equator Books Cafe, I wondered what reactions he'd been getting while going out around the country doing book readings and signings. What seems to have struck him most profoundly is how reading the book has made people examine their own lives and childhoods in ways he didn't expect. The Father/Son thing is there, and dominant, but also has made people (including me, who also grew up without a father) realize that kids are intricately involved in what's going on in the world of adults. Divorce, parents fighting with their new boy/girlfriends, stress, demands, freedom (the likes of which it seems kids of today have lost) ... all of it shapes the kind of people the kids are going to grow up to be. And now that Norman is a father himself to his 9 year old son, Noah ... it was time to examine these things, and put it down in writing to share with Noah, and the world. 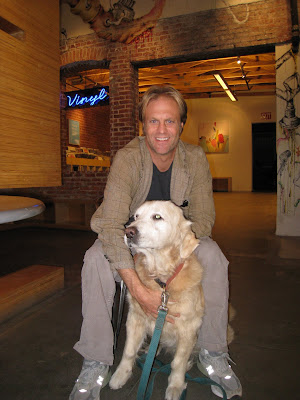 The main themes, both in the book and in life, seem to be the importance of sharing your passion with your children (whether that's surfing or music or stamp collecting or hula dancing or whatever), and instilling in them how important it is to "Never give up." There will always be struggles, but if kids have those basic ingredients (along with the basic lodging and LOVE, of course) given to them, most likely they'll be alright.

Having grown up in Malibu, Norman has lived in Venice for most of this Millenium. We were talking about what we love about it and why we choose to live here, and Norman had what is really about the best answer there is, "the People." Absolutely, and why I'm trying to introduce us all within this site - the COMMUNITY of it all. There is also the bonus of walking or riding bikes everywhere we go, the Surf, the ability to get GOOD food nearby, and that nice feeling of walking down the street and having people know you and wave, or how you like your coffee, that kind of thing. Whereas a lot of people like to romanticize the "Old, rugged days" of Venice, Norman said those days were also sorta scary and dangerous ... you could just PLAN on getting mugged ... and now it's "Beautiful and friendly", and a much nicer place to live and raise your kid/s. I'd have to agree ... to a point (NO Chain Stores, please).

Apart from doing press and signings for Crazy For The Storm (which will also be a movie - but don't wait for it. The book is always better.) and raising Noah (who is now a member of the Mammoth Ski Team, following in Dad's footsteps), and moving into a new house with his girlfriend, Jenny, Norman is about to get underway on his next book, which he says will be about the years in his 20's when he set out around the world to "Invent himself". He had been so defined in an instant by the plane crash, that he didn't want that to be what his life was only about. I won't tell you more because you'll want to read about it for yourselves.

For someone who has seen and lived through so much already as a young man of 41, Norman is extremely calm, composed and kind. You can tell that he was already like that when you see old news footage of him as a freshly rescued 11 year old kid. And I think what makes him like that are the basic principles taught to him by his Dad. Which he now teaches his own son. What I liked best is when he said, "Noah will know beauty. And he can return to that no matter what else is going on in his life."

Earlier in the Summer, I had just finished reading Crazy For The Storm when I was out swimming in the ocean one morning. A couple of surfers were heading right for me, and when they got closer, I saw it was Norman and Noah. It was so touching to see them together like that when the book was so fresh in my mind. We waved and yelled our greetings as they passed, and I celebrated the fact that we ALL know beauty living here, and hopefully do our best to constantly recognize it, no matter what else is going on in our lives.


* My other two favorite Summer books:

Zeitoun by Dave Eggers
The Road To Woodstock by Michael Lang
Posted by CJ Gronner at 3:23 PM