Bobby Brown ("No, not like the singer, he's like ME!") is better known as The World's Greatest Wino on Venice Beach. I sat down to talk with him this morning ("Let's sit on a bench in the sunshine."), and can assure you that he lives up to his title. Except that he's sober, and has been for 12 years.

Bobby was born in Georgia, lived in Florida and New York, until making his way to the West Coast in 1978 to get away from a crazy ex-wife (among a few). That's also when he began drinking himself into oblivion - to forget about the bad marriage. He has children (two sons) and grandchildren, but he doesn't keep in touch with them anymore, as there were a lot of rough years, and when his Mother died, the link to the rest of the family died with her. 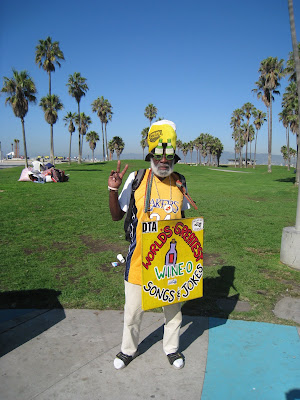 He brought his bit to the Boardwalk, with all its foot traffic, and kept up the heavy drinking until a little stint in jail for "being a pharmacist." An excellent Parole Officer (named Aaron Davis, "my Eskimo", who Bobby wanted a shout-out to) was physically responsible for getting him sober and into AA meetings. Bobby had been drinking until he was sick - throwing up blood sick - and that was that. It dawned on him that if a sign and a cup (to collect his tips) could keep him drunk, it could help him do a lot of other things.

He said, "I've drank up 747's, and now I fly in them." He saves up his collections and travels now instead of spending it on the sauce. He's been all over Europe ("Though I never got to Istanbul. My fantasy was to sit in the Casbah and smoke hash."), South America, and more recently, The Philippines and Thailand - where he has a 22 year old young lady (He showed me a photo. He's heading back over the holidays. Yep.) currently "driving me nuts, emailing me all the time." For the record, Bobby is 72. And he's replaced his drinking vice with the ladies, or as he put it, "I'm a Sucker. Ladies IS my problem now." Yeah, but they likely help keep him young and at it, working the Boardwalk, bellowing his trademark song, "Jingle bells, Jingle bells, Help me get drunk!" That's exactly what he's singing right here: 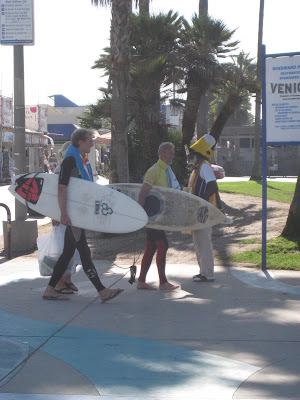 And he IS going to get drunk - just not until the year 2209. That's a date he chose to sit on the hill by the Skatepark and finally drink his favorite - Remy Martin - out of a brandy snifter in the sunshine, because "You don't know" - you don't know how long you're going to live, and all he can think about is TODAY, for not getting drunk. But you always have to have something to look forward to. Asked if he's false advertising a bit, he answered, "I hate a liar more than anything. I'm not lying, I'm asking for the MEANS to go to the liquor store - but the liquor store sells a lot of things." He gave me his business card, and I said, "This is a fresh card." He gave me a sly look, and said, "I AM fresh!" Again, he does not lie.

He alternates his signs (his favorite: "Dr. Kind Love, S.O. {Sex-Ologist} - Sex Counselor and Happiness Dispenser") and hats (his current one is an Oktoberfest one, "for October"), and has a million songs and jokes to entertain the crowds with. Like this one ...

"I was in Hollywood and saw this giant guy with a little tiny head. I asked him how he was so huge, and had such a tiny head, all out of proportion. The guy told me that he had woken up in a hotel room and a Leprechaun was there, with a Fairy Princess. The Leprechaun said the Fairy Princess would give him anything he wanted, and the Guy said, "How about a little head?"

We shared a laugh and a firm handshake, and Bobby Brown, World's Greatest Wino, carried on down The Boardwalk, dispensing his own special brand of happiness.
Posted by CJ Gronner at 12:46 PM