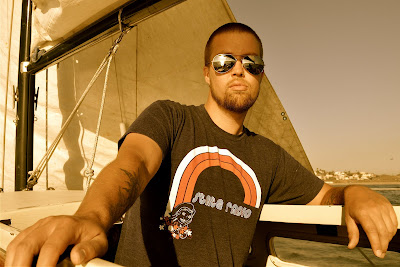 Paul Gronner takes the best pictures I've ever seen. And I'm not saying that just because he's my brother. It's just factual. He's been doing it all his life, but recently .. they just blow minds. I mean, LOOK at these!!

He's a Venice guy, that grew up in Minnesota, and the best of both those worlds reside inside him. He got to know pretty much everyone in Venice through managing Abbot's Habit for years. We'd be out somewhere in Hollywood and someone would say chat Paul up, and I'd go, "Who was that?", and he's say, "I don't know, Triple Non-Fat Half-Caf Latte." LOTS of people knew him from there. Then he started The Habit Night, a live music night each Friday, that saw everyone from local favorites like Matt Ellis, Quebb, and Paul's own music, to Tom Morello in one of his first shows as The Nightwatchman. There were epic nights put together by Paul, and I've missed them every Friday since he left that post.

Ever since he was a little kid, he's had a very artistic eye. He's harnessed that gift over the years, and hones it with every day that passes. I'm not kidding, I'm constantly amazed at what he can do with his camera, and it's without Photo Shop and all that. Just straight talent. Look for yourself at his recent Venice sunset: 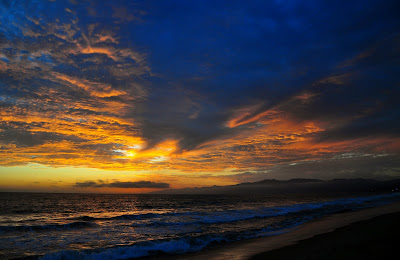 Paul is also about to blast off your faces with a new band ... stay tuned for info on that. He paints intricate paintings (and skateboard decks!), he knows how to drill stuff, he can build you a half-pipe, he can beat you at S-K-A-T-E, and he's one of the funniest people I know. It's good that he lives in Venice, where creativity is celebrated above all else. That's what has kept him (and most of us) here for all these years.

Some of Paul's local favorites: He likes Benice for breakfast (we differ there, but good for them!). He likes to make a pizza sandwich from Abbot's pizza, where you fold a Bianca slice over a Salad slice and eat it together. He loves the Onglet at Lily's. He enjoys the Carbonara at The Pasta Factory. He will tear up the Strawberry Roll at Hama. If you want a good bar burger, Paul suggests you try Hinano's. For a more special occasion, head over to Piccolo and get the filet, urges Paulie G. OK!

Sometimes things crop up that don't involve dining, that Paul is also into. First Fridays on Abbot Kinney (usually followed by a late-night jam at his place on Horizon that boasts super tolerant neighbors ... and his rooftop bbq's overlooking The Boardwalk rule too). Our gang loves to go to "Playa de los Amigos" (you know where it is if you know us - don't tell everyone either!) for beach time, and a rambunctious game of "5" - the Frisbee game he invented with his boys. He is THRILLED with the new Venice Skatepark, and can't believe his good fortune that it opened literally at the end of his street.

I am so proud of the person that my brother has grown up to be, and I just wanted to take this opportunity to boast about his talents - and let you get to know him better, and spread the word about his sick photography. He's available for any idea you may have that requires a gasp-inducing image to illustrate it. He has shot multiple bands, was the videographer for Tom Morello's Justice Tour, can do sweet non-generic head-shots, baby photos, weddings, fashion, National Geographic worthy nature scenes ... he's basically in the business of making dreams come true. Get at him at www.facebook.com/Paulgronner. Prepare to be dazzled!

I'll let him have the last word this time:

" I enjoy the fact that all my Venice friends are either musicians or artists and we all spark off each other and inspire and encourage, that's really cool."