FINALLY!! Venice gets itself a Skatepark!

"It's about time, Man! THANK YOU!!!" was the shout from the man next to me at the ribbon cutting for the Grand Opening of the Venice Beach Skate Plaza, and the sentiment of absolutely every other person in attendance, and probably around the world. Venice is pretty much the HOME of Skateboarding (Dogtown, and Ghosttown before that ...) and it's been long overdue in having a real home for skateboarders to call their own. 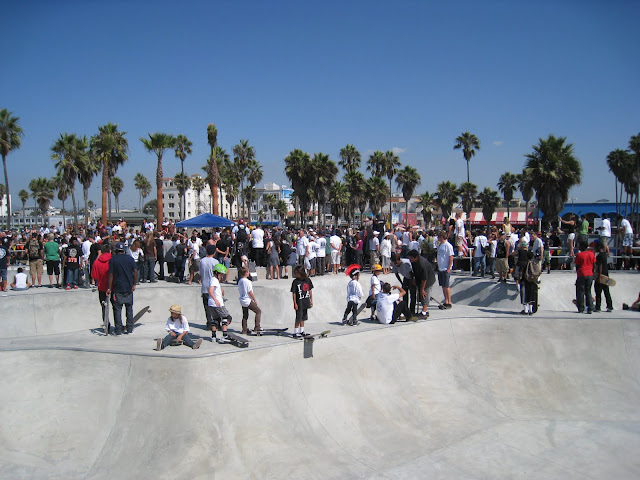 October 3, 2009 put an end to all that - after many years of hard work, fundraising and red-tape, the Dennis "Polar Bear" Agnew Skatepark is now open! It was a perfectly glorious morning, and hundreds of people were out at the beach to celebrate this monumental occasion. The mood was purely jubilant all around, and I strongly felt the absence of my brother, Paul, who is in Australia at the moment. He has been a Skateboarder for most of his life, putting up with grief from the jock dudes in high school, building half-pipes in our backyard (that scarred half the neighborhood in Minnesota, including me trying to drop in and face-planting on the bottom ... but the fun was worth it!), getting in trouble all over town for not being able to resist that perfect railing, and sticking with it until this very day, watching the sport grow until now there's even little tiny girls out there getting air in a bunny eared helmet. He now lives straight up the street about half a block from the Skatepark, and when he gets back, he is going to be THRILLED. As was everyone present last Saturday.

It was the full Official ceremony, complete with National Anthem, God Bless America, and a "21 Gun Salute" - which was really some guys from the VSA, (whose organization really made the entire thing possible) who marched out like military guys and banged their skateboard decks against the concrete 21 times. Rad.

After a Native American blessing and remarks from the various politicians involved, Professional Skateboarder Jesse Martinez spoke to roars from his peers and fans ("Dogtown brought the Big Dog" was one shout). He has been focused on this project for 30 years, and seemed pretty emotional about this day, for good reason. He comes from the days when you could get arrested for skateboarding, and said that now the Third and Fourth Generation of Dogtown kids can come here to skate without dealing with any of the B.S. , and enjoy a brighter future for Venice. It was also an example of how "you can make your government work for you. Don't give up on your dreams." 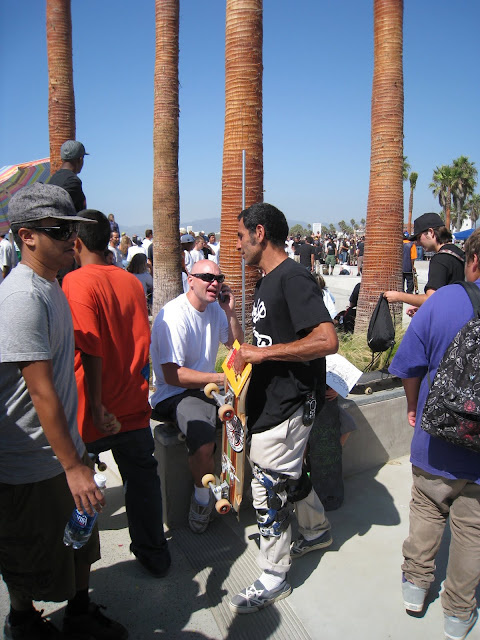 Our Councilman, Bill Rosendahl, said "This Skatepark is another piece of the mosaic of the Venice Coastline", and introduced L.A. Mayor Villaraigosa to cut the ribbon. A huge cheer went up from the crowd, and someone yelled into the mic, "LET'S GO SKATE!!!" Someone got on and said, "The Venice Skatepark is now officially open! Skate your brains out!" And that's exactly what happened. 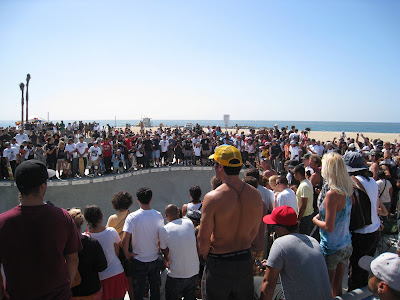 It was so crowded I don't know if anyone got to have their dream session, but the smiles were wide - from little tiny kids (including my little buddy, Strider Ellis - already sponsored at 6!) to a whole bunch of Pros (another time I wished Paul had been there - he'd know who they all were. I saw Christian Hosoi, Tony Alva, and Jesse Martinez, but I know there were a ton more present. I did not see my favorite OG skater, Natas, but I'm sure he'll be there soon). One teenager guy walked by, with his voice cracking in excitement, "This place is so skate-able, Dude!" I think that's a pretty good endorsement. 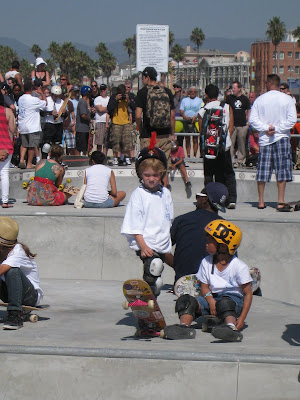 I overheard one of the guys who had been on guard-duty of the park while it was being built telling a friend that if any Taggers came near the Skatepark, the least they can expect is broken pointer fingers (making it more difficult to spray-can paint. Yep.), so consider yourselves warned. It's taken so long to come to fruition, I hope that people will respect it as the hallowed ground it should be. And it's FREE!! I'm so excited for the kids of Venice (and visiting Venice), that they can enjoy a lifetime sport, and now have a home court from which to learn and excel. I love the contrast of old school Venice guys, now holding their little babies ... seeing the traditions being passed down and honored. That's what keeps Venice, Venice. 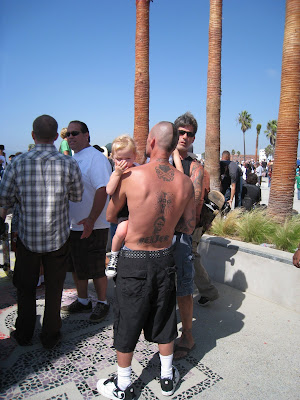 There have been people flying above the park all weekend since the opening, and I don't see it letting up any time soon. Get down there and see what hard work and perseverance can build! Be dazzled by the skills and athleticism of this sport that has earned its place alongside any other. Be proud of your Community! Get out there and try it yourself! (I might even give it another go now ... or not, but it's so great it makes you want to at least try.) Again, it's about time!! Skate your brains out!! 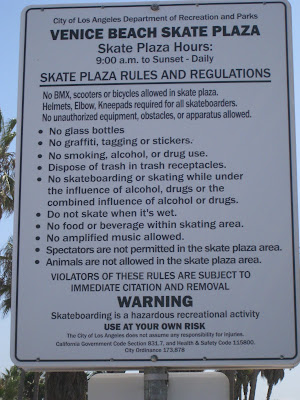