Daniel Johnston played the last show of his U.S. Tour at the Henry Fonda Music Box in Hollywood on Saturday night, and my dates were a four year old (Truman) and a seven year old (Amelia), and their Mom, Christina. You don't know how often you'll get to see Daniel Johnston in life, so we figured the kids should share in the experience with us. They rocked us up with their own songs on the car ride over, my favorite selection being "Golden Guitar" sung with cup microphones. 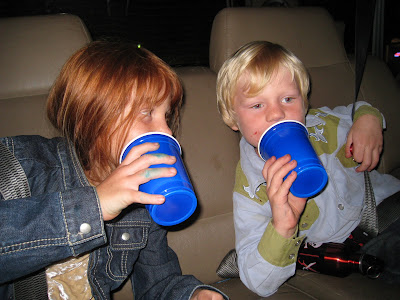 We found our seats in the balcony (Thank God. The kids fell asleep two minutes into the first act, and that would've been a heavy load to haul down on the floor. Phew.), and settled in for the evening, Transformer cars and all. We told the kids it would be fine if they had a nap, and Truman said, "No, I want to stay up and see if the ending is happy." We wanted to see that too.

The evening opened with a lively set by Soko and all her friends/band. She hopped on to the stage screaming, with a stuffed tiger worn like a backpack on her back. OK. She's eclectic, that was established from the get-go. She's French, and has a very Bjork-y voice, that raises up into a straight out yell quite often, for emphasis mostly. She has that song on KCRW that goes, "I'll never love you more than ..." - a whole bunch of eclectic things, that I kind of like, but she's so fidgety that I started to feel loopy myself from watching her. She has a very good fiddler named Paul sawing alongside her, a drummer, a drum-stick girl, a flannel shirted guy that banged whatever, a accordion girl, a horn player ... Kind of Edward Sharpe style. Then I heard she dated him. Aha! I get it more now. Even though I thought out loud that she'd make a better girlfriend for Daniel Johnston ... who I think would really like one ... 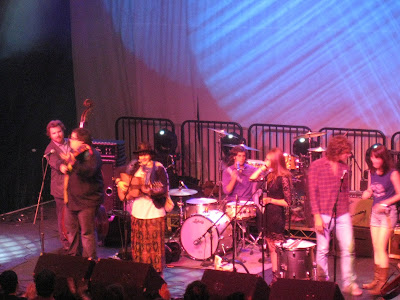 "Treat Your Woman Right" was a lovely song, and sent out "as a message to all you evil guys!" Soko's skirt was giant and falling off of her so she took over sitting at the drums for a ranting one, screaming, "I'm getting closer to an Elvis breakdown!" One believed her. That was followed by a group sing-along with the whole joint ('cept us - we weren't comfortable with the lyric for the kiddies ... who were just asleep ... ) yelling, "People are mean, people are bad, they're trying to ruin my life!!" After a few more high-spirited jigs, Soko (really Stephanie Sokolinski) thanked Daniel Johnston for having them aboard, and the curtain fell on ring one of the circus.

Next up was The Hymns. Four guys from Brooklyn. Truman kinda snored next to me, and that's how I felt about this group. The guitar player was distractingly hyper, and the singer's voice began to grate. Though they were enthusiastic, it didn't seem as if the audience was. There were a lot of people crammed on the floor to see Daniel Johnston, and this band was unfortunately on as the night grew restless. They got the good fiddler Paul back to join them on a song, and that was the highlight for me. They thanked Daniel Johnston too, and we shifted the kids heads to a comfier angle, looked at the time, and hoped for the best.

Daniel Johnston was the subject of the 2006 documentary, The Devil And Daniel Johnston, and I hope you've seen it, but if not, you can't truly understand how remarkable it is to be seeing him play anywhere live. He suffers from manic depression, and that heartbreaker of a film shows how he's struggled with his demons, while simultaneously having vast influence on all sorts of artists and rockers - most notably Kurt Cobain - who one senses identified both with the pain and the genius of Daniel. He is very medicated and fairly reclusive, so a National Tour at this stage ... is real, real impressive.

He began playing his small guitar even before the curtain rose, and the hoots and hollers that arose from the crowd threatened to wreck our great scenario with the fast asleep kids. They're hard core kids though, and all was well. All appeared well with Mr. Johnston too, as he said, "Hi. How are you these days?", asking his famous t-shirt quote. The audience made it clear that they were doing great to be here and now with him. They LOVE him. (and AGAIN, we had the people shouting their love in the house. So dumb and annoying. Respect one another.) I have to confess I'm not extra familiar with the entirety of Daniel Johnston's discography - mostly because it can get a little depressing. Even so, every time you hear one of his songs, you can hear the HOPE seeping through the jagged edges of the darkness he obviously endures. His voice and rhymes are child-like, his guitar playing is rudimentary and jangly, but the raw feeling and wit contained within every line of Daniel's music is something both shocking and true.

Pop culture references abound, like, "Maybe the Wizard Of Oz ran out of consolation prizes ..." and "This is the beginning of Star Wars ..." sung as he read them off his big folder of papers on a podium. There is also a patina of wistfulness over everything he sings; sometimes overtly so - "I wish I had a girl, or even a boy ..." - and sometimes more subtly, "Let your hair hang down, let your love come around ...". The honesty with which he communicates, and the uncensored thoughts that pour out of him, would be reserved for a shrink or priest for most people. Not Daniel Johnston. He's up there singing them all loudly, and inviting you along, to know that dark as things can get, where you really don't know if you can go on ... there is humor, there is hope and there is love. 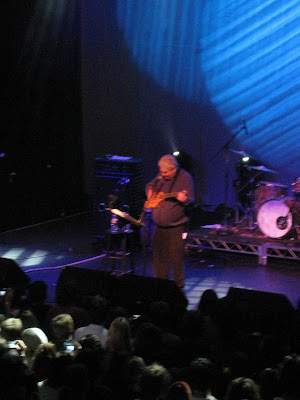 Even in the ominously named, "Life In Vain", the resonating line is "I don't want to be free of hope." And "Flip on your t.v. and try to make sense of that." This and the next few were sung as Daniel was backed on beautiful acoustic guitar by his long-time friend, whose name I sadly did not catch. Sung with shaking hands clutching the mic, but full of love, "Live In Light", "Hey, Joe" and "Summer Love" were inspiring, especially the latter, which even wished for a "Happy ending to us all" - like Truman wanted! Daniel loves The Beatles, and ended his first set with the John Lennon song, "You've Got To Hide Your Love Away", with an emphasized, "HEY!", announcing that he would take a break and be back shortly.

When he returned, he brought back The Hymns to be his backing band. Which I preferred them as, and they were quite good at - other than the distracting guitarist's antics. They did a rocker of a song about "Stinking Motorcycles" and then one about "Rocking the night away", and then Daniel said, "Thank you for all the money you gave me. That's' going to buy a lot of comic books." So you can see what I meant about Uncensored.

Next was a song about a girl he liked going out with a Mortician called, "Man Of Death" - with the cheerful cynic line, "the only way you can get her to look at you is to die." Daniel Johnston's latest album, "Is And Always Was" was just released this month, and the next three were selections from it: "Fake Records Of Rock and Roll", "Freedom" and High Horse". People went crazy when he stopped to say, "How do you feel tonight?" and one tool yelled back, "How do you feel?!" Daniel took a second and then said, "I feel alright. I take a lot of drugs. You should go to the Doctor and ask for antidepressants, they're better than marijuana." We covered the kids' ears for that one. But whatever works.

The Beatles' "Revolution" was a raucous crowd-pleaser, and then the even rowdier, "Rock and Roll", that perfectly summed up how the night, and music in general, can really be an uplifting power ... "There was a day that I was so lonely, I looked for Hope but all around me, people didn't seem to care ... But OH, that Rock and Roll saved my SOUL!!" Right? Doesn't it feel just like that sometimes? And it's even better when you all share the load together, like in The Henry Fonda this night.

Daniel then said, "Thank you, Good Night" and picked up his folder, walking off the stage while the music was still playing. People were yelling so loudly, whistling and clapping, that the kids now woke up (Perfect timing!), just in time to see Daniel Johnston return to say, "This is my Christmas wish for you all", and play what is my (and a lot of peoples') favorite of his tunes, "True Love Will Find You In The End." His acoustic guitar friend was back to play with him, and it was so beautiful and heart-felt, and the words so sweet:

"This is a promise with a catch
Only if you're looking will it find you
‘Cause true love is searching too
But how can it recognize you
Unless you step out into the light?
But don’t give up until
True love finds you in the end"

... that you actually did have hope that this happy ending could happen for us all. Looking at the kids waking up and smiling as they heard this gentle man share his heart, made you pretty sure of it.
Posted by CJ Gronner at 1:36 PM