Beck at The Bowl! You know I wasn't going to miss this one ... though I did miss opening act St. Vincent doing a D.J. set as "St. Vicious" ... but we weren't in a big rush to see someone spin records for their Hollywood Bowl gig + L.A. traffic = Sorry, St. Vicious. 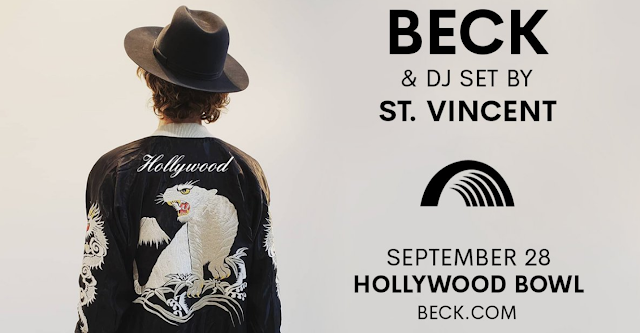 We did hear a little Talking Heads being spun as we walked up the hill, but everyone around us kind of just shrugged when asked how it was, so I imagine it was just like listening to tunes on the radio as we drove up Highland. Good enough for us. 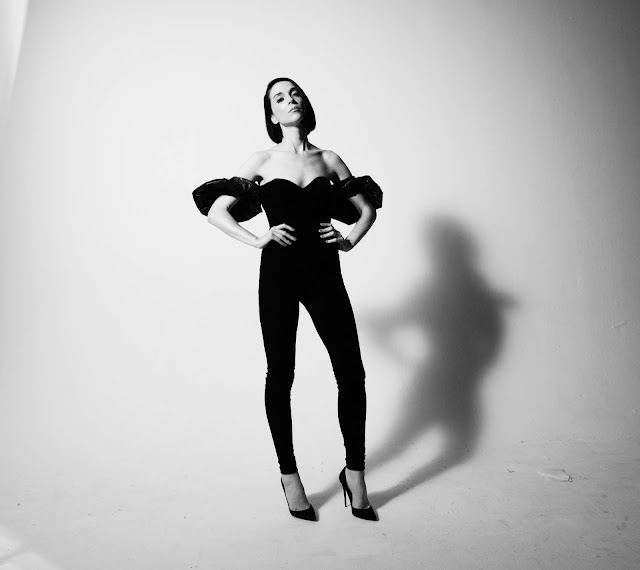 We had just enough to time to scarf down our picnic before the lights went dark and Beck took the stage in full Rock Star mode, all in black with a toreador-style hat, and plenty of dramatics. He and his backing band tore into "Devil's Haircut", and Beck was super animated, bouncing all over the place, and shouting "Odelay! Buenos Noches! How you doing, Los Angeles?!" We were doing awesome, and it just kept getting better. "New Pollution" was excellent, and Beck explained that this was a homecoming show, and that they'd been on tour forever (15 months), and were excited to play tracks from his newest album Colors for their hometown friends, family, and neighbors. "Hi Neighbors! There is no better place to be on a Friday night in Los Angeles!" We all roared in agreement, and were given "Mixed Bizness" as a reward. You could tell that they'd been on the road playing this set for a while, as the banter veered pretty close to rehearsed cheese at times, like when artists work the song title into the chat, it always feels lounge singer-y to me - but I don't think Beck minds being lounge singer-like sometimes ... as in the lead up to "Up All Night". "If I see boys and girls dancing, can we stay up all night?" Like that.

Then it got a lot more L.A.-centric ... "This song isn't appreciated in other parts of the world, but I think it will be here ... I'm from the East side, Pico-Union. My first studio was in Boyle Heights, and every day I'd walk down the street and they'd say 'Hey, Güero! Who do you think you are, Axl Rose?!" That, of course, led to "Qué Onda Güero", and people loved it. Speaking of the people - this was a VERY white audience, with some of the all-time worst white dancing I've ever seen. Like, shockingly bad. Wow. You can't diss it really, though. Music that gets people up and dancing should always be celebrated, it's just ... Wow. I think Beck is rock and roll that has been deemed "safe" for the older, whiter crowds that still want to feel cool, but will never mosh. Have never moshed. Safe rock. Having said that, Beck doesn't play it safe at all when it comes to his musical genres, doing exactly whatever he wants, when he wants. The entire night wound all over the place, from utter pop to deep gospel stomp, and everyone loved all of it, That's the beauty of Beck. He'll make them like kinds of music they might never have heard before,and gets them up and out of their chairs, FEELING it. That's a rare and important gift, and a delight (and comedy) to witness. 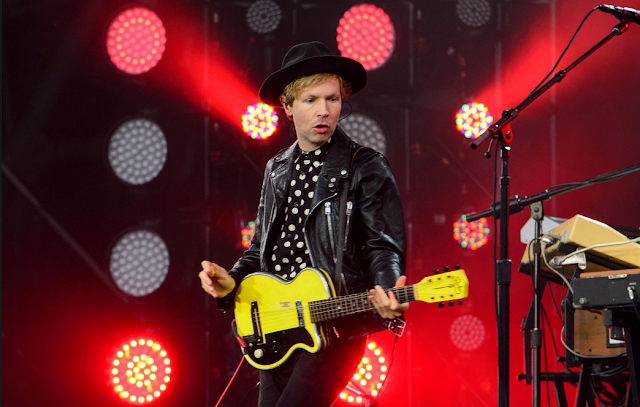 "The last time I played here was ten years ago! When I play songs here in Los Angeles, you get it and know what I'm talking about ... you're a product of your surroundings, and these are some strange, beautiful surroundings. This one is for the Lovers ... people don't talk about slow jams anymore, but I'm bringing that back." And Beck did bring slow jam back with "Debra" and its laughs-getting shout outs to places in L.A. like Glendale and Zankou Chicken. Beck is funny! And I'd never found him sexy before really, and both my friend and I were like, "Beck. Huh." with his swagger and playing stirring up new admiration for both his humor and total command of his show. Then he REALLY got into my heart with a lovely tribute to Prince, and a cover of "Raspberry Beret". The first time Beck ever came to the Bowl for a show was to see Prince - and I was there too. It was special, and now I love Beck even more.

"Nicotine & Gravy" was fly, and then "Hollywood Freaks" was brought out for the Hollywood weirdos in the house, complete with a big, trippy light show featuring lasers. Lasers really get the folks up dancing! The lady in front of us was losing her mind, and I was happy for her - even as her husband just checked Twitter and tried not to look at her going nuts. "I'm So Free " and "Dear Life" were both gorgeous, but up next was the highlight of the night for me. Beck brought out Fred Martin and his Levite Camp choir that blew the place apart with "Fourteen Rivers, Fourteen Floods", and "Like A Ship Without A Sail". Holy (literally) Moly! It was something else, full of harmonica and acoustic guitar and piano and clapping and WOW. "That was something special for tonight!" said Beck when it was over, and just, thank you. It was fantastic. (It also begged the question, HOW is Beck a Scientologist?! Like, WHAT?! So smart, so talented, bringing up Christian choirs, but believing in E-meters and shit like that? I don't get it.)

"Any requests?" brought out shouts for everything in Beck's catalog, plus one clever older white man yelling "Sinatra!" (Told you. Safe rock crowd.) Beck and his backing band harmonized at the front of the stage acoustically for a sublime version of "Lost Cause" that almost made me cry. "Truckdrivin' Downstairs Neighbor" was more L.A. storytelling (about lost record stores like Aron's, Moby Disc, Peaches), and then right into "Blue Moon" that was so pretty I decided then and there that acoustic, pretty Beck is my favorite Beck. 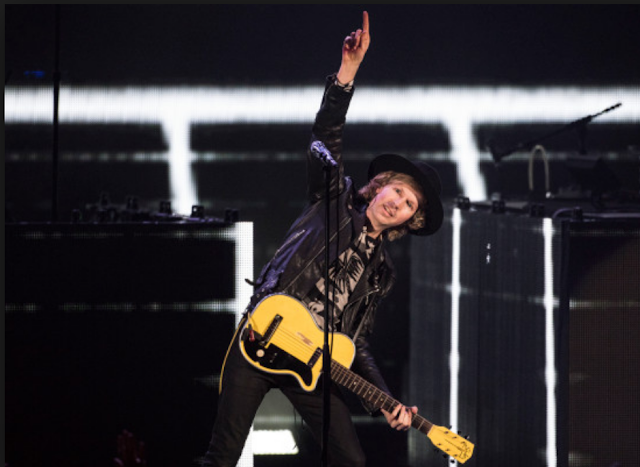 Pop Beck was back next, and the techno lasers and electronica video game style backdrop was completely different than the tunes played right before, and that required a Beck costume change as well, now back in all white to play us "Dreams" and "Girl". Everyone was up and dancing again for his "Sun-Eyed Girl", and that led right into "Wow" from Colors, that really was WOW. This was the rapping, attitude, break dance moves Beck - and I think he's my second favorite Beck. The man wears a LOT of musical hats (and just hats in general), and cracked everyone up again here when he said, "Say it like Owen Wilson ... Woooow". A decent impression that slayed the crowd.

"Loser" was next, and everyone went wild. This was how we first met Beck, and it brings me back to such a time in L.A. ... just moved here, driving down the Wilshire corridor, feeling young and disillusioned at the same time - as the sun shined over it all. "Loser" is a bookmark on the timeline of my life, and it was a pure treat to hear it again live at the Bowl. And it was also pretty funny - and powerful - that Beck can get a whole crowd singing loudly "I'm a loser, baby, so why don't you kill me?" Calling themselves losers and asking to be killed is some serious lyric power, dude. "E-Pro" was next with its "Na na na na na na na!" chorus, that makes me think of E-Meter. No. At this point, my friend turned to me and said, "He's like a legit weirdo rock star. There aren't many of those anymore." True point of fact, and he also looks the SAME as he did when "Loser" dropped, for real. Rock keeps you young (if done the right way), clearly. 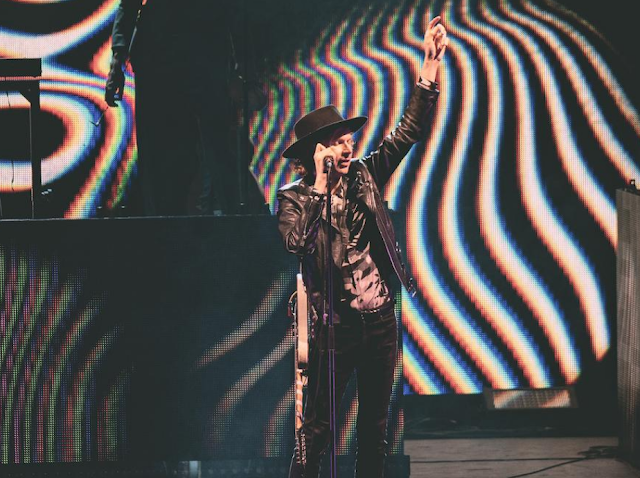 A quick little breather brought back Beck in a sparkly jacket and his whole crew on stage."Where It's At" was a total crowd pleaser, and also the answer to what was cool to be at on this night in L.A. THIS was where it was at. "That was a good drum break!" That led into band intros ("There's gonna be some preening!"), and each instrument did a little riff on a cover, from Talking Heads to Phil Collins (the drum standout) as Jason Falkner, Roger Manning, Jr, Dwayne Moore, Chris Coleman, Jake Sinclair, Cecilia Della Peruti, and Alex Lilly each got their well-deserved applause.

After a crowd singalong of "Happy Birthday" for Annie Clark (St. Vincent had her birthday this day, now I felt bad that we'd missed her spinning!), Beck got DOWN for "One Foot In The Grave" - a foot stomping, harmonica playing honky-tonker that the people loved. "He can do whatever he wants and everyone loves it", I said to my friend, and truly believed that he could have done polka jams and the crowd would have begun square dancing. Beck is a musical alchemist. "I think they're about to pull the plug on us, so the power might go out in the middle of this ...!" said Beck as they reprised "Where It's At" with full disco lighting and distorted vocals. The entire band electric slid sideways together off stage, and the crowd just kept on dancing. "That was some entertaining shit!" was overheard, and absolute fact. Beck puts on a SHOW. 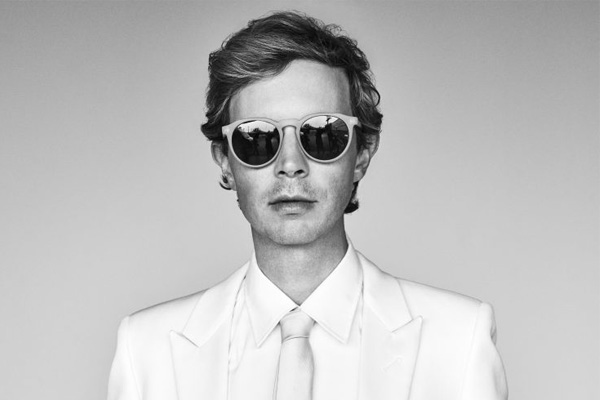 Thank you, Beck! Thank you, Bowl! Another in a storied history of awesome shows. I'm so grateful for nights like these ... they really are what keep you going in this crazy world. It's like, WOW.